Read on Twitter
I wish Alberta's Finance Minister Travis Toews would be more honest with Albertans about what the signs were telling us through 2019 and into 2020 pre-COVID. Neither he nor the Premier are being honest with you, and likely not with themselves. So, here's a quick look: 1/N
Flash back to late 2018, even before the UCP government were elected: the outlook was pretty solid and things were looking up. RBC, for example, was predicting AB real GDP growth of 1.5% and 2.7% for 2019 and 2020 respectively:

http://www.rbc.com/economics/economic-reports/pdf/provincial-forecasts/provfcst-jun2019.pdf
In that June 2019 report, the second bullet read: "Alberta’s economy facing challenges: Mandated oil production cuts by the government have been scaled back but effects
of last fall’s oil price tumble will continue to impact the economy negatively in 2019."
Now, let's go to September '19. The "job creation tax cut" has been announced and implemented, and RBC again downgraded its long term outlook for Alberta, holding its 2019 estimate at 0.6% GDP growth but again lowering their 2020 outlook to 1.9% growth.

http://www.rbc.com/economics/economic-reports/pdf/provincial-forecasts/provfcst-september2019.pdf
By December of 2019, we see another downgrade of the long term outlook for economic growth, holding the 2019 estimate at 0.6% and lowering 2020 again, to 1.7% growth. That's a full percentage point deduction in the 2020 outlook from Dec 2018 to Dec 2019. …https://royal-bank-of-canada-2124.docs.contently.com/v/provincial-outlook-december-2019
Provincial Outlook - December 2019 https://royal-bank-of-canada-2124.docs.contently.com/v/provincial-outlook-december-2019
Sticking with the pre-COVID theme, I'm only going to talk about one aspect of RBC's March update: their estimate of 2019 growth which they wrote down to 0.3%. That's right, 1.2% lower growth than they'd predicted in December of 2018.
But, it's worse than that...
For 2019, Alberta had the worst performance of all the Canadian provinces in terms of nominal or real GDP growth or employment growth. Not below average. Not just worse than forecast. The worst. In Canada. 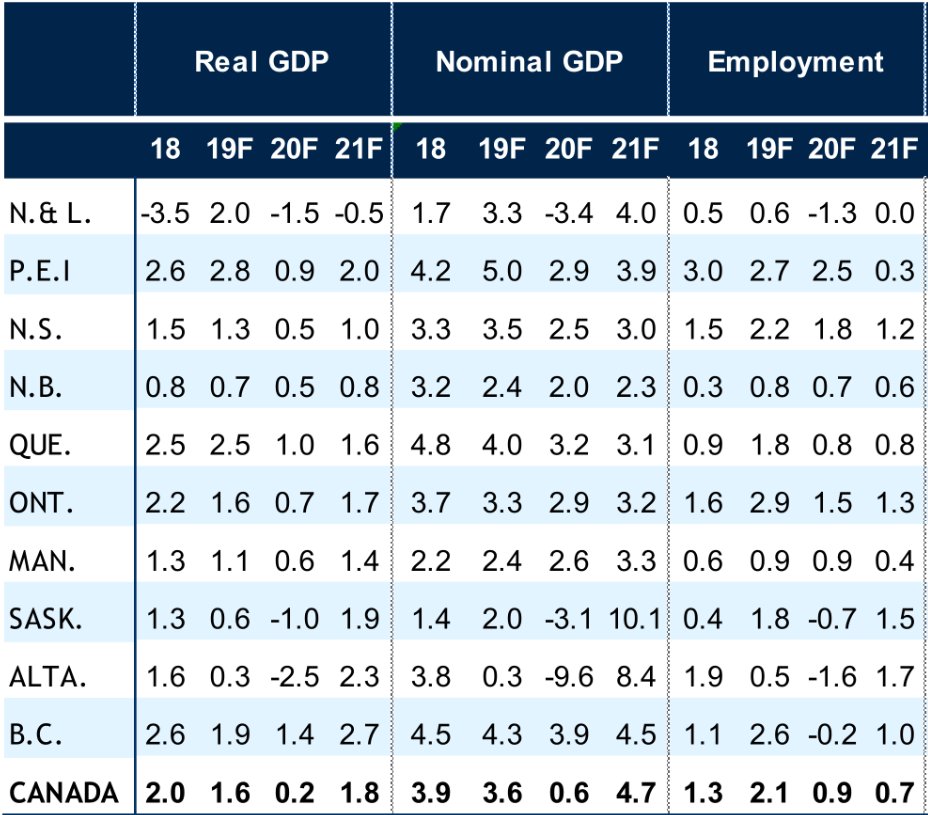 That the Minister of Finance and the Premier can't admit this to Albertans should alarm all of you. That they will stand at a podium and tell you that, pre COVID, things were finally looking up after years of bad times flies in the face of the evidence they had in front of them.
Demand better.
You can follow @andrew_leach.
Tip: mention @twtextapp on a Twitter thread with the keyword “unroll” to get a link to it.