Read on Twitter
What we're seeing play out with the repeated, completely unstoppable 'discussion' of BLM protests and COVID19 is extremely reminiscent of the 2010s-2015s era where media outlets helped politicise climate change science and solutions. Let me (briefly) explain.

Back then, climate change was perceived as a "new" science, in which there was enough uncertainty to justify 'both sides' being heard. The Drum was running trash-fire op-eds by fossil fuel advocates. Key players were *proud* to treat it this way. 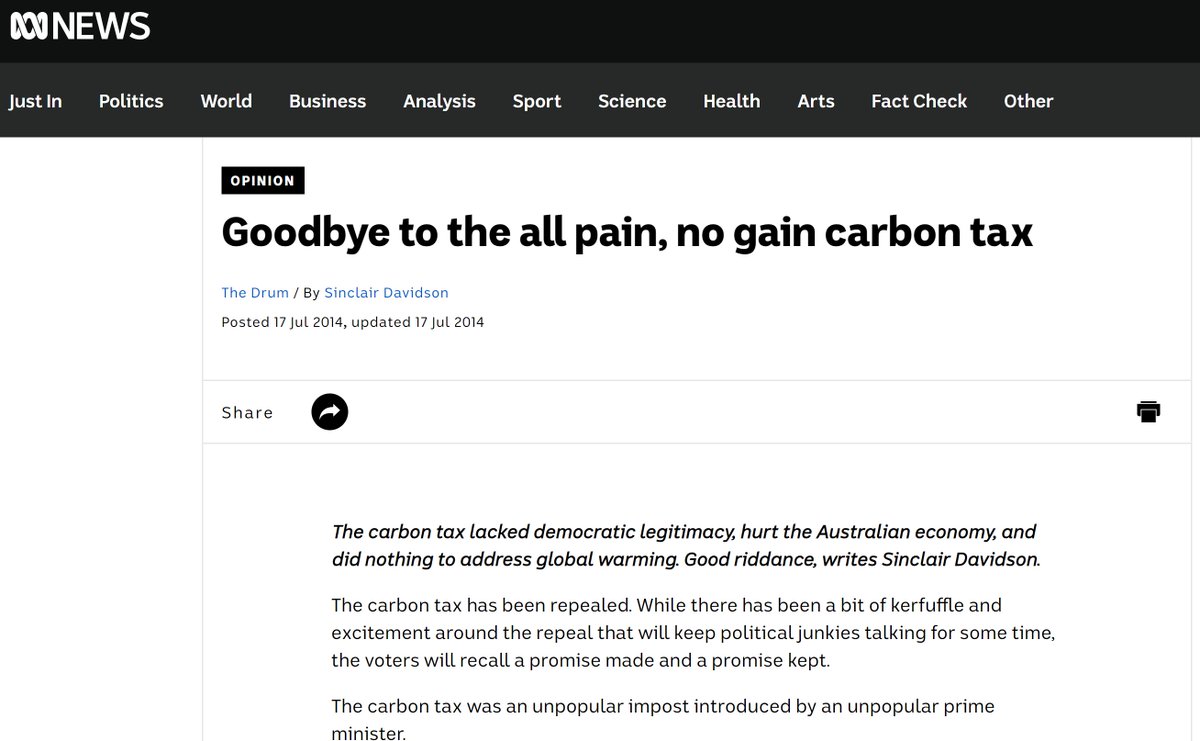 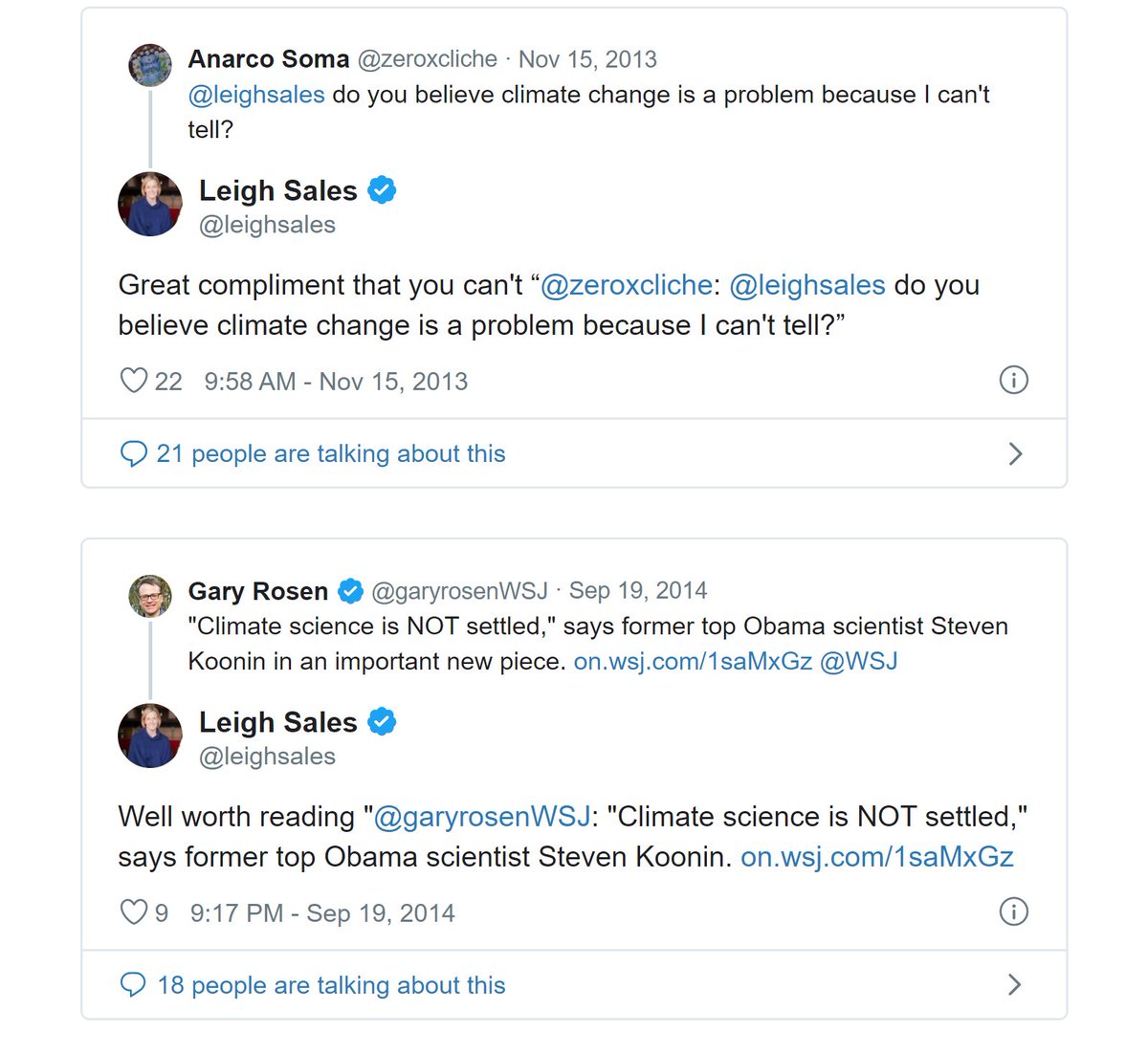 just as another eye-opening example, in 2009, Lateline's Tony Jones ran a debate between George Monbiot and Ian Plimer. 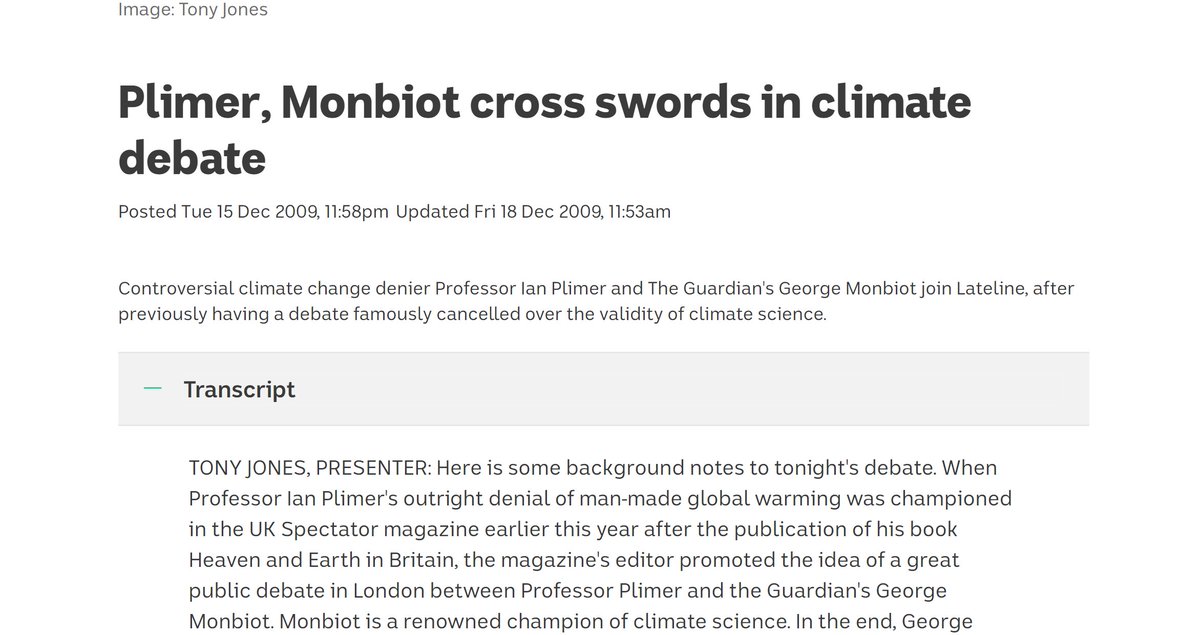 Of course, in 2009, there was no 'uncertainty'. Consensus among scientists was well and truly reached. But the *perception* of uncertainty - created by fossil fuel PR - was sufficient for this to be treated as a 'both sides' issues for at least half a decade, by most media.
COVID19 is new, but when it comes to the impact of large-scale but socially-distanced and infection-controlled (masks, hand-san, stay at home if sick) protests, a clear pattern has emerged: no outbreak anywhere in the world has been linked to any protest. Anywhere.
This is true for Norway, Denmark and Australia, all with low infection rates.

It's also true, incredibly, for America, with easily the highest incidence of this disease in the world. 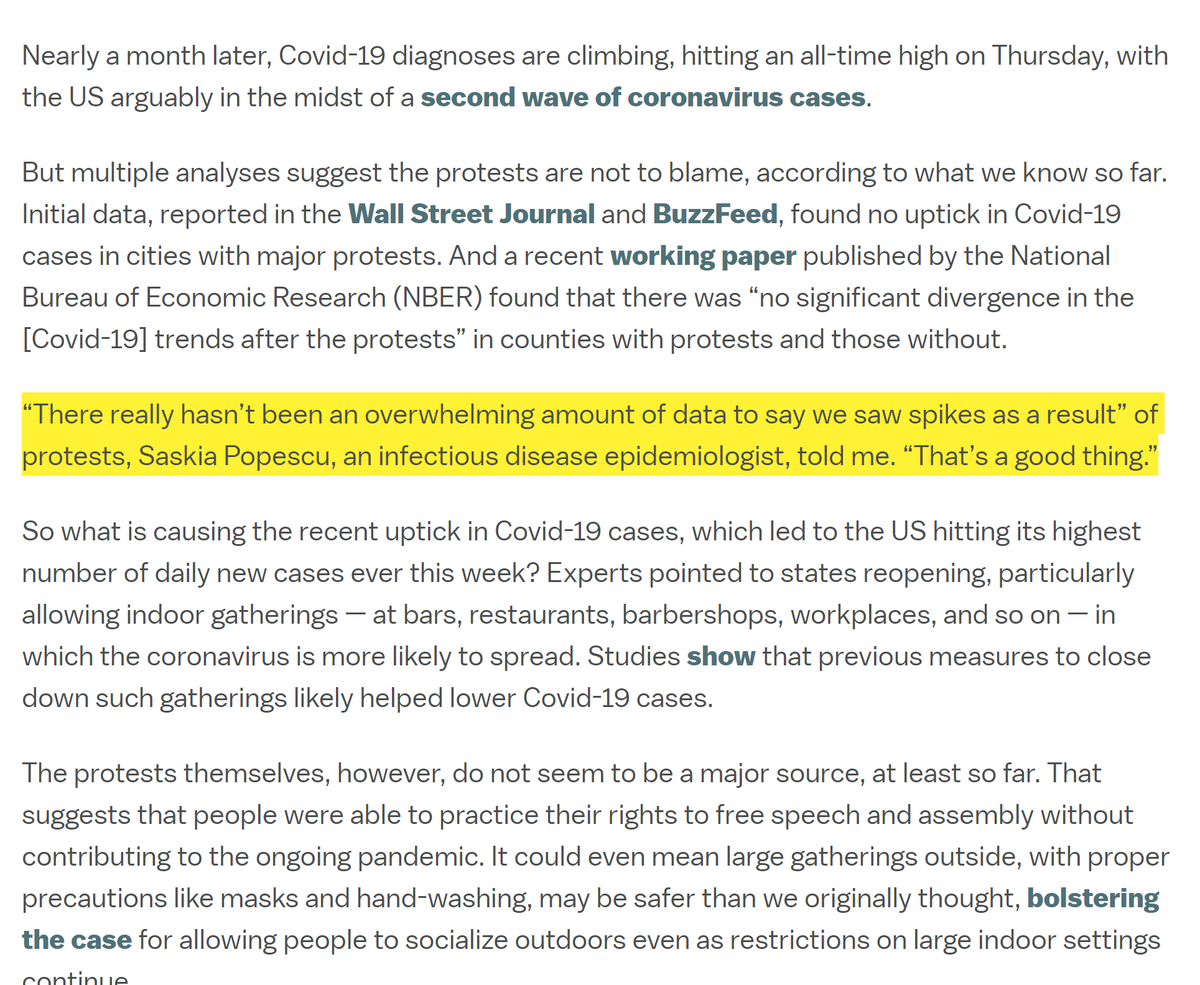 The racism-COVID discourse has had a few phases so far: 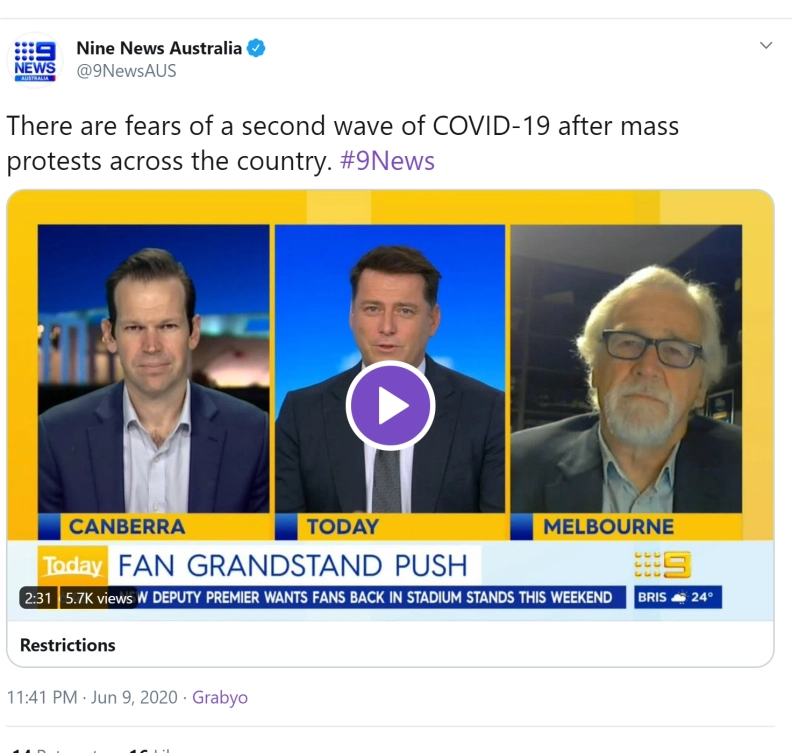 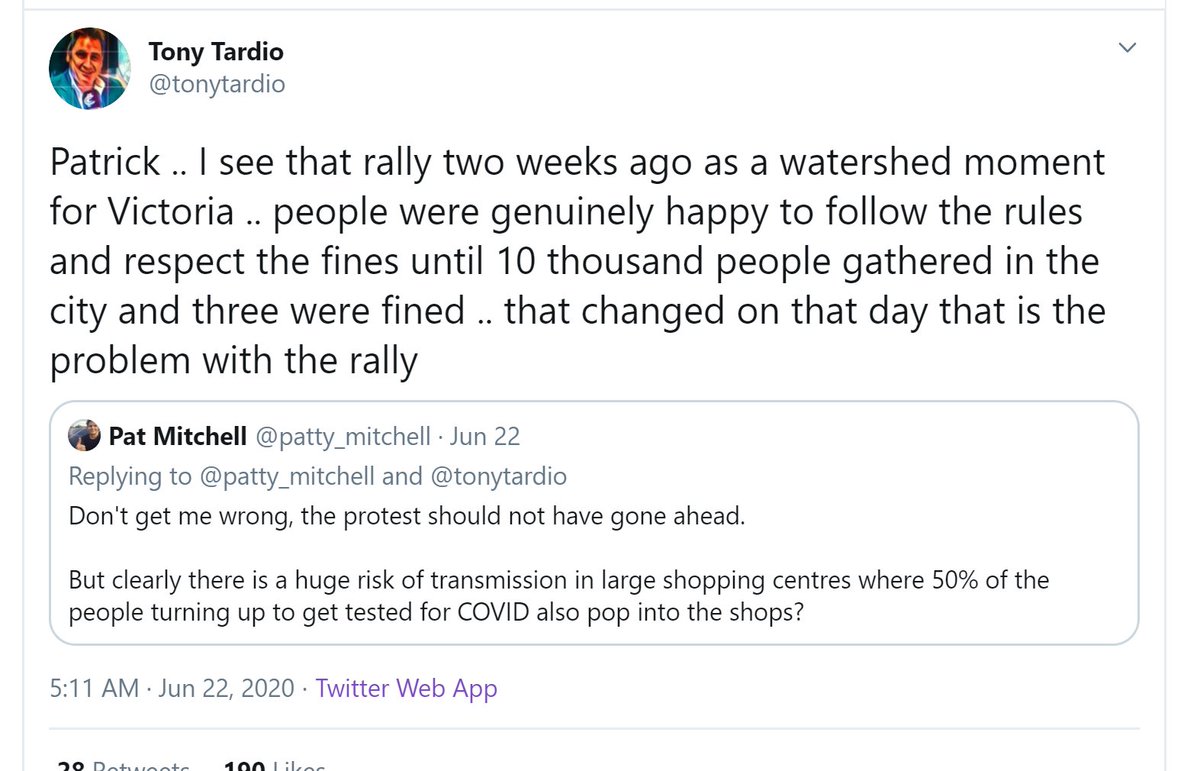 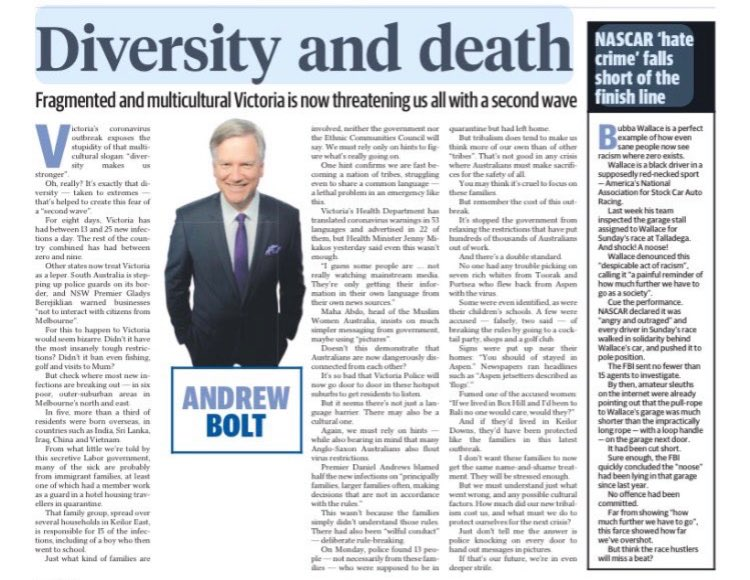 Here's the thing: you can actually freaking *check* these claims. No, seriously. You know. Checking. It's actually pretty quick.

I also did Checking and two independent data sets both point to the 'people's attitudes changed after protests' meme being total, pure, uncut lies. 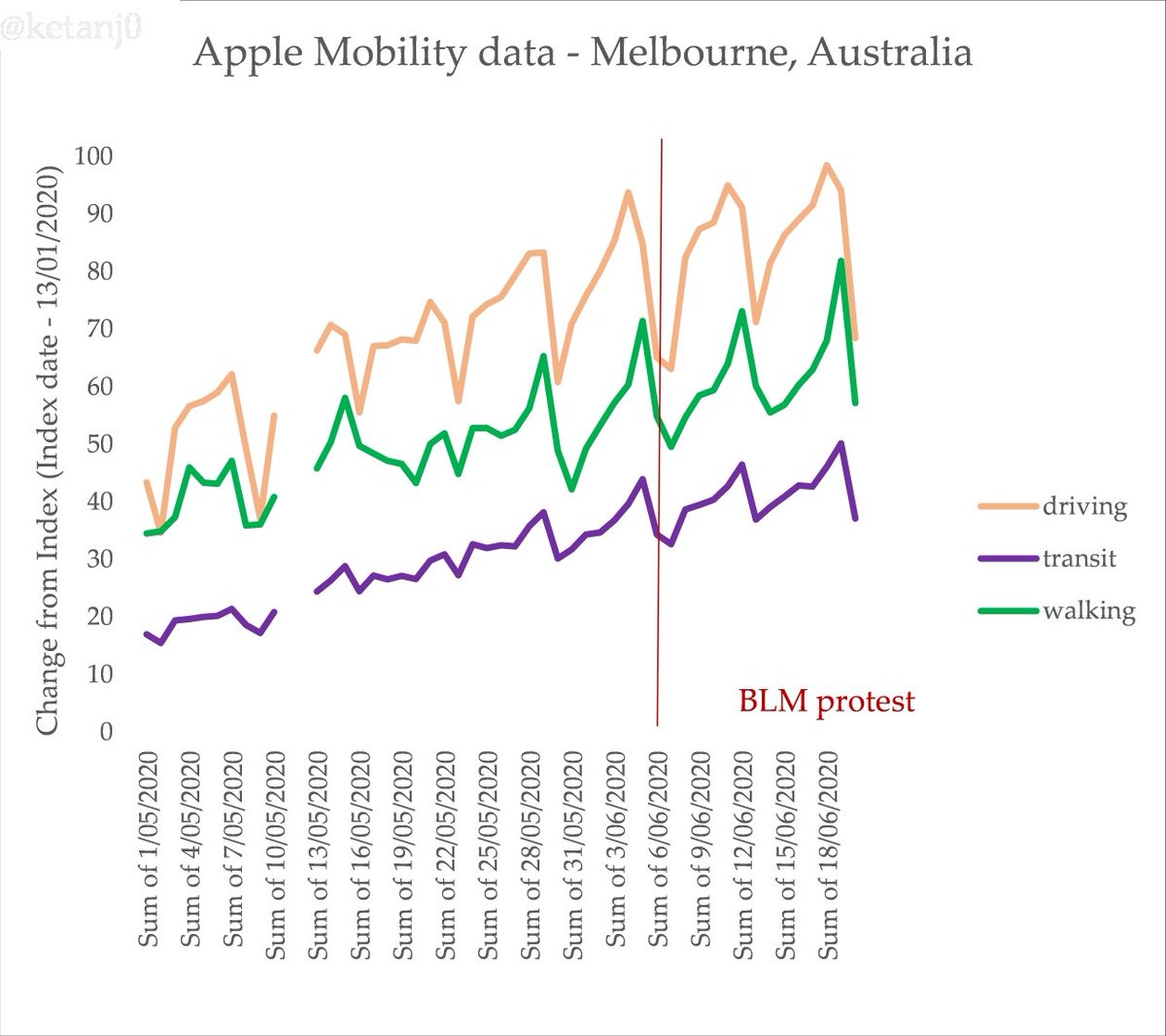 So, this is a problem. A really big one. Fact checks get walled off into the Fact Check department, unclicked, unread, and released always at least 500 weeks after the lies have spread into the hearts of every single anxious racist in the world.
Political commentary is walled off too. Colourful, engaging, genuinely great to watch, but absolutely in no way allowed to engage with facts, evidence, science, analysis; because to declare that something is a deception and an intentional lie would be too 'biased'. A black mark.
At some point in the future, someone is going to look back on 2020-2022, and lament the politicisation and "tribalism" of the COVID19 response.

You know what? We can stop it. Treat evidence like it exists. Treat a lie like a lie, and analyse it accordingly.
If someone claims a certainty, and they have no evidence, that isn't an opinion. That's a lie.

When Greg Hunt said BLM protests caused mass behaviour change, that's Australia's top health minister lying about a pandemic, during a pandemic. That is a major fucking deal.
There's no evidence to suggest 5G causes coronavirus. But there's nothing to disprove it either. If Greg Hunt said that, do you think you'd see people clasping their hands together and 'hmmm, let's discuss'ing that on morning TV?

No. It'd trigger a national emergency.
Racism - both explicit and systemic - are the driving forces behind treating conspiracy theories and lies about BLM protests and multiculturalism as reasonable theories to be debated.

The consequences will be racist too: greater police powers to crack down on victims of racism.
So don't treat this one like it's a nothing-burger cloud of opinions you disagree with. Treat it like what it is: a systematic, widespread effort to create a racist narrative using lies, pseudoscience and illogic, paired with a widespread effort to either ignore it or launder it.
Fuck, this wasn't brief. Sorry. This is just shockingly frustrating and I'm probably never going to stop yelling about it.
You can follow @KetanJ0.
Tip: mention @twtextapp on a Twitter thread with the keyword “unroll” to get a link to it.