Read on Twitter
In NY's primary, I didn't vote for Biden. (I believe in voting your

in primaries, even in long-over races.) But I want to tell you a story -- in a long thread, sry! - about why I'm not just voting *against* Trump but actively *for* Biden this fall. TL;DR: It's about grief. /1
In May 2017, I was invited to join a small meeting in DC with a handful of other org leaders to give updates to the VP on our work. Honestly, I was terrified -- I was the youngest one in the room & feeling very out of my league. /2
(As an aside, I remember it vividly because this meeting was the same day Comey got fired -- the push notifications popped up on all our phones in the middle of the meeting & we all got a bit distracted...) /3
Anyway: So after my presentation on @runforsomething, the VP talked a little about his time as a 28-year-old on the New Castle County Council, and the way it felt to make a real impact on his community. (Y'all know I love that.) /4
After the meeting, people were schmoozing. I was standing in the corner talking with @schultzohio , who I know from Obamaworld. Greg kindly asked me: "Amanda, do you want a picture with the VP?" I declined. /5
"I really don't like doing that," I said, laughing & feeling kind of silly. Greg laughed with me - then called the VP over. "Mr Vice President, come take a photo with Amanda!" /6
The VP came over & I tried to play it cool. "Well, my Grammy would be furious if she knew I was at a meeting with you & didn't get a photo." 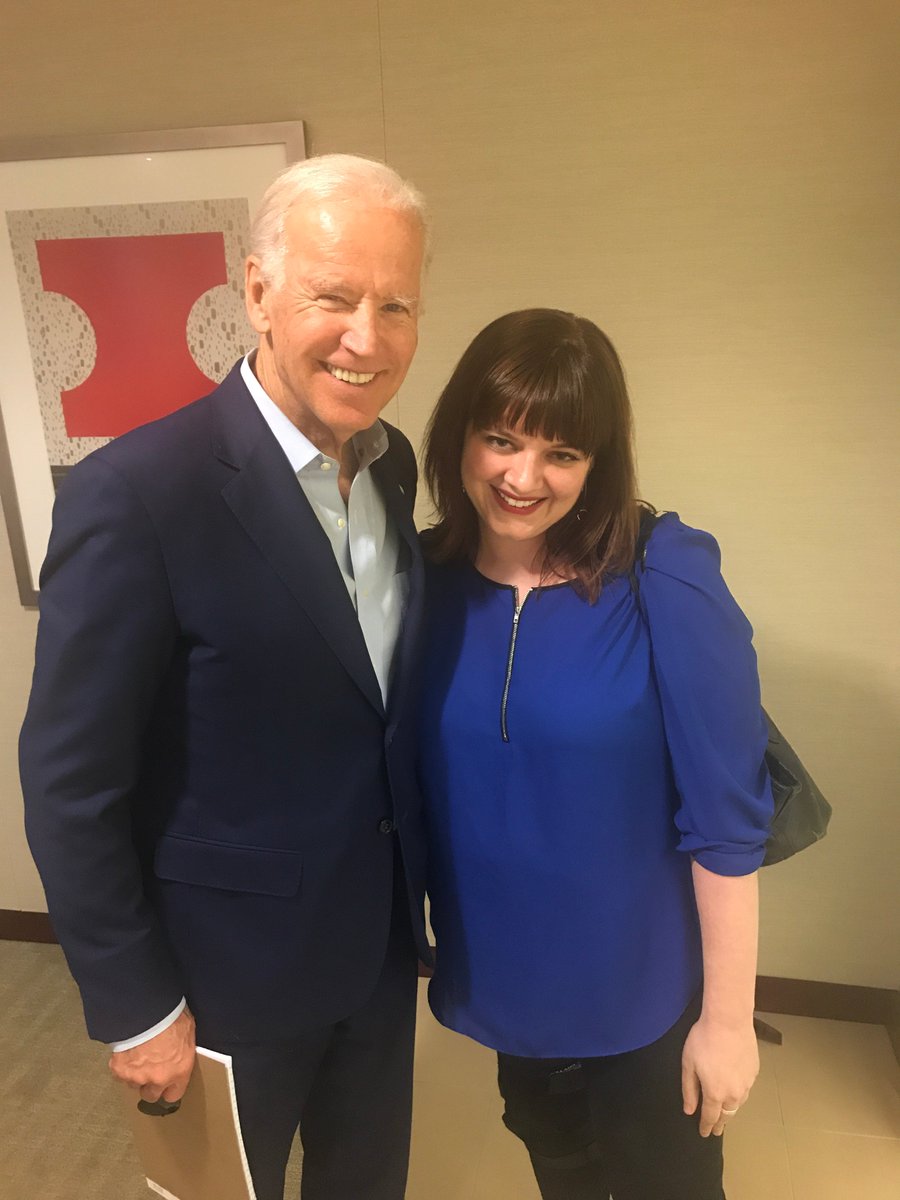 So I took my phone back and did what he asked: I called her. "Hi Grammy," I said. "Sorry for interrupting your bridge game. Someone wants to talk to you." Then I handed my phone to the VP. /8
"Hi Grammy. This is Joe Biden."

Grammy's a loud phone talker, so I could sort of hear her -- she was overwhelmed. He started out by talking about how how @runforsomething is doing great work & that she should be so proud of me. (FWIW, she is!) /9
Grammy went on to tell him how she has 18 grandkids -- and she's truly proud of all of us. The VP was smiling & cheery, and I could nearly hear her smiling through the phone. Then she went on... /10
She had four daughters. Her second eldest, my aunt Michelle, was in the hospital. Colon cancer, advanced. She was really sick. She had three kids, all young. It had been a rough two years. The VP's posture changed immediately. /11
VP Biden stood still. He stopped smiling, turned solemn & serious, hanging his head like in prayer. "I'm so sorry, Grammy. I'm so so sorry. You know my son Beau died of cancer. As a parent, you should never have to even think of one day burying a child. It's a nightmare." /12
"I promise you. I'm going to do everything I can to help you," VP Biden went on, talking about his moonshot effort. He stepped away, speaking personally with her about sitting in a hospital room with a sick child, about pain. I could hear her choking up on the phone. /13
The VP took his notebook & wrote something down. "I'm giving Amanda my personal home phone number. You need anything, you call me. You're in the DC area, right? I'll come to the hospital & sit with you. Anything." /14
He handed it to me, and @schultzohio looked over my shoulder, confirming for me it was legit (& kindly asking me not to post it on the internet, a request I'll keep.) The VP kept talking to Grammy for a little while - maybe 20 minutes in total. /15
Then the VP handed me my phone back. "Your Grammy is a strong woman. I'm so sorry about your aunt. Please: Anything I can do. Anything." He gave me more staff contact info, and said good-byes. I was stunned. I thanked him, and a few minutes later, he left. /16
Less than five months later, my aunt Michelle died of colon cancer. VP Biden sent my Grammy a beautiful and heartfelt condolence letter. He also sent one to my uncle, who he'd never spoken to. It meant so much to them. /17
Grammy still talks about the call & that letter. She notes how much it meant to her to have her pain seen and heard. "He's a genuinely nice man," she says. "He just gets it." Her grief (and my family's grief) mattered to him, and he understood how to relate to it. /18
Our entire country is grieving -- hundreds of thousands of people have literally lost loved ones, millions more are grieving the futures they had planned, the weddings & careers & dreams that are no longer viable. Joe Biden viscerally understands how that grief feels. /19
Part of rebuilding the country after Trump will be politics & policies -- but just as big a job will be refinding our nation's emotional stability, or what the VP calls our "soul." We're all going through trauma. Our next president needs to be the one helping us heal. /20
VP Biden can do that. He'll help us all grieve. Joe Biden will see our pain, respect it, empathize with it, and help transform it. That's why I'm glad & excited to vote this fall -- not just against Trump but genuinely for Joe Biden. /21
Thanks for bearing with this long thread. After my aunt died, my family set up the Michelle Benaim Memorial Fund at the @CCAlliance. A donation is always appreciated. /end https://www.ccalliance.org/patient-family-support/michelle-benaim-memorial-fund
Lots of beautiful responses & kind words -- but this is my favorite one. https://www.ccalliance.org/patient-family-support/michelle-benaim-memorial-fund

You can follow @amandalitman.
Tip: mention @twtextapp on a Twitter thread with the keyword “unroll” to get a link to it.