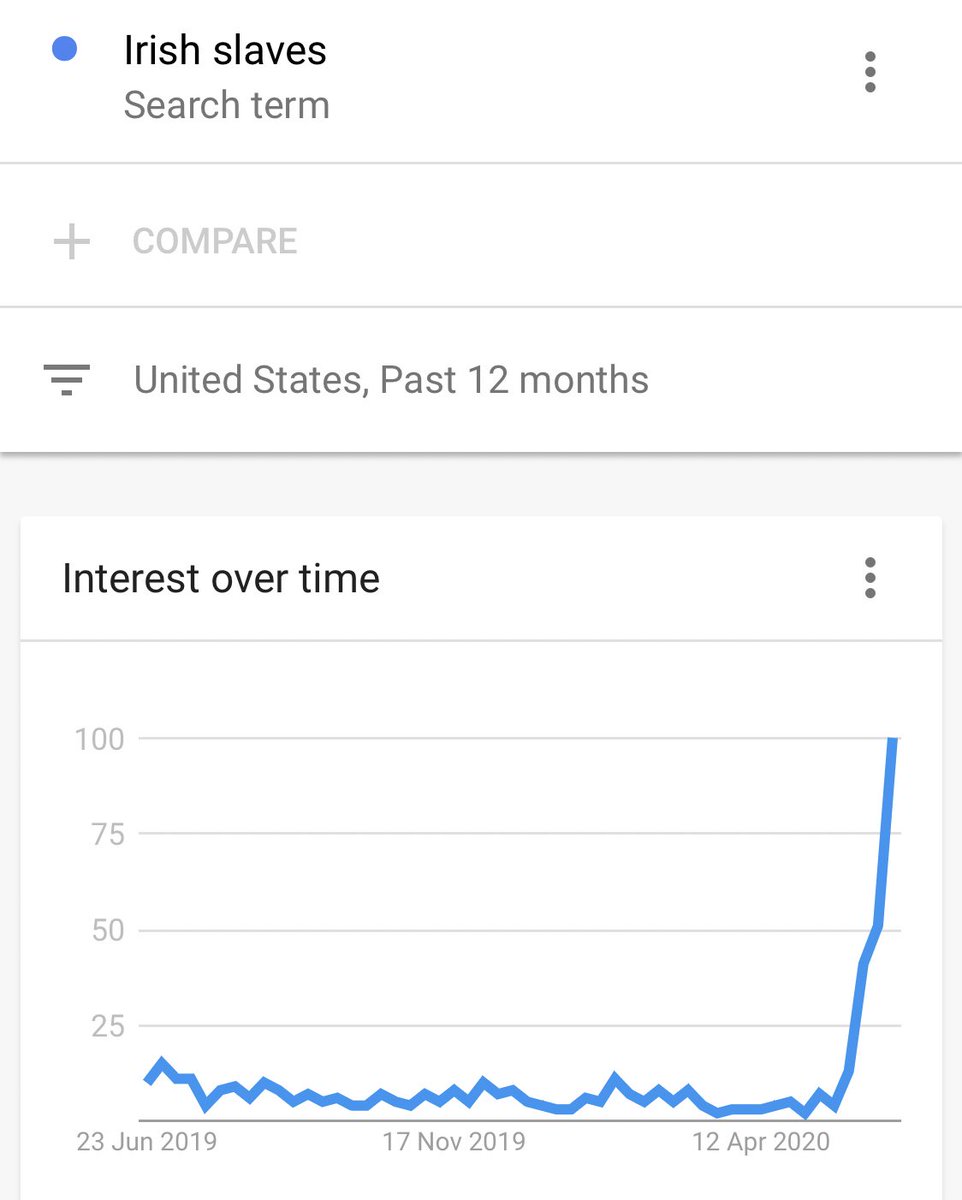 An indicator of its prevalence on social media rn is that my work has been cited by multiple “fact check” teams ( @USATODAY - @AFP - @Reuters - @thejournal_ie) over the past week alone. https://factcheck.afp.com/photo-used-support-claim-was-taken-hundreds-years-later
Photo used to support claim was taken hundreds of years later

A post shared thousands of times on Facebook and Instagram says the “first slaves shipped to the American colonies in 1619 were 100 white children from Ireland.” The claim and others made alongside...

https://factcheck.afp.com/photo-used-support-claim-was-taken-hundreds-years-later
The problem is that this goes much deeper than people simply unwittingly spreading misinformation, the far-right seeding disinformation or bot farms sowing discord.
The denial and ignorance across society about the legacy of the transatlantic slave trade is a remnant of the ideological system that sustained it.
Four years ago

I don't really know what to say. An "Irish slaves" meme posted on Facebook on the 21 June by a member of the Norristown Republican Committee has racked up almost 900,000 shares in less than a week thus potentially appearing on approx 300 million timelines. 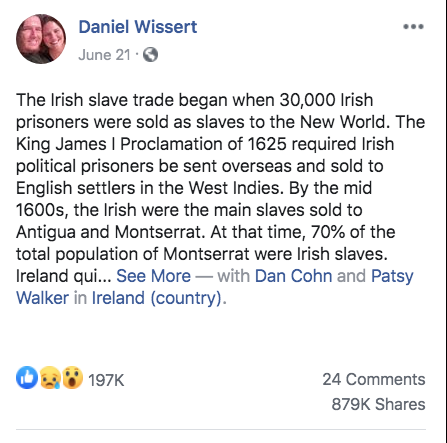 This is the most viral version of the meme that I've tracked over the past six years and the fallout from this instance alone will last for years. It was achieved by a Republican whose favourite quote is from the Ultimate Warrior.

Maybe social media was a mistake.
The text that he copy and pasted is from that same ahistorical blog post published in 2008 (see my pinned tweet) and the image that he used is of Italian miners in Belgium (c. 1900) which has been appended to various "Irish slaves" memes over the past few years. 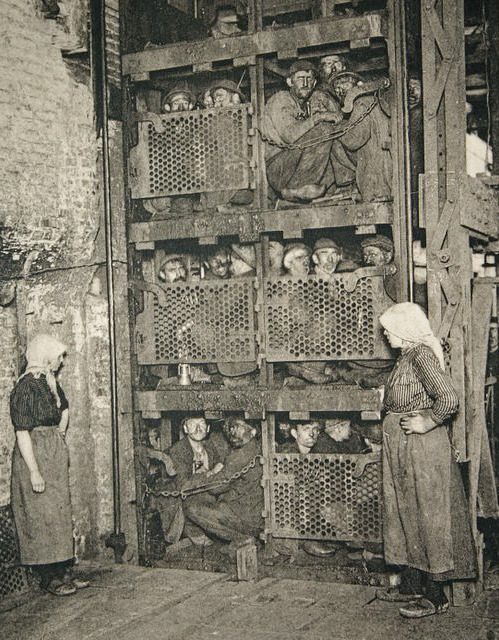 That image was originally misattributed by a Facebook page in 2017 which claimed that it was a photo of coal miners in West Virginia. Then from there it was taken and added to "Irish slaves" posts by whole platoons of unimaginative and fragile racists. 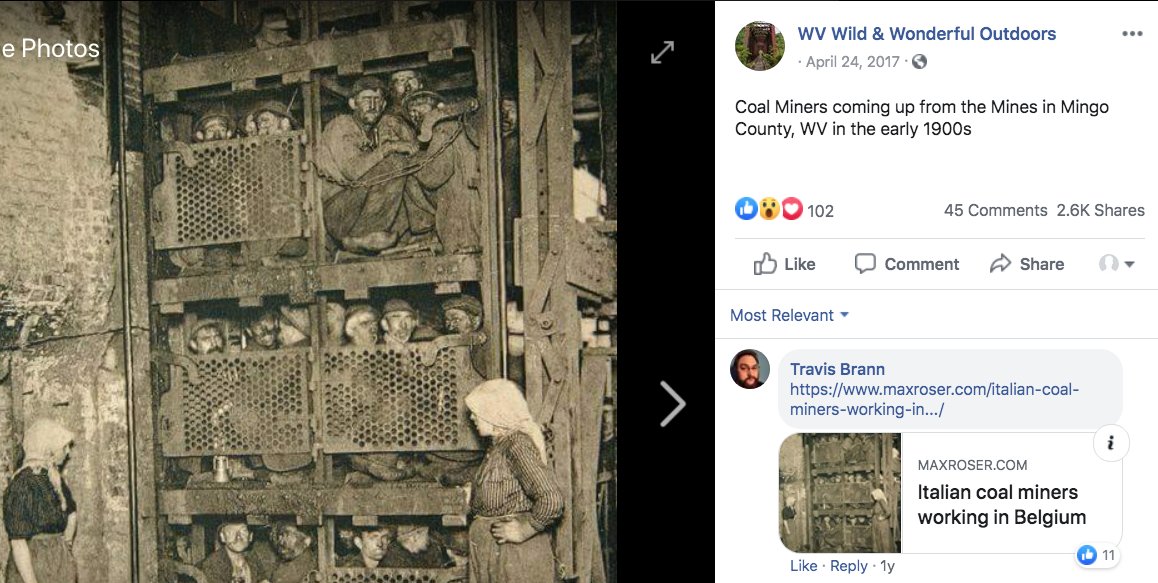 In the face of the speed and scale of such a flow of disinformation, where potentially millions of people are being influenced and comforted by racist propaganda in mere days, it seems impossible to think of an effective response.

Ever tried, ever failed, &c.
Akenson: “The real test of any mythology is not its accuracy - that is irrelevant - but whether or not it works."
Update: Currently approaching one million shares. Yet no action taken by Facebook.
American Neo-Nazi leader Kevin Alfred Strom: “Living and labor conditions for Black slaves, bad as they often were, were usually far better than those for White slaves.”
Holocaust denial journal The Barnes Review: “You think blacks had it tough with slavery in the Americas? Even tougher was the fate of Irish men, women and children forced across the Atlantic Ocean and into bondage on these shores.”
This racist propaganda which aims to negate the history and legacy of the transatlantic slave trade has gone viral on Facebook more times than I can count and yet here they are still sitting on their hands.

You can follow @Limerick1914.
Tip: mention @twtextapp on a Twitter thread with the keyword “unroll” to get a link to it.