Read on Twitter
So, I’ve crawled out of my NSFW account (where I‘ve been for the past couple of weeks, but I’ll be coming back here in a little bit) to make a general statement on something that’s been going around.

How Asagiri (and conversely; the fandom) handles Dazai’s mental health.
I’m pretty vague on my mental health here, and but many of you know I’ve been in therapy for the last 13 years. This November it’ll be 14.

I was hospitalized several times during middle school and my latter years of highschool.

So I come to this with a certain amount of +
background knowledge on mental illness that many people do not always have, particularly younger people engaging with a story as emotionally nuanced as BSD.

First of all, I would like to address the fact that there is a tendency amoung people who watch the show to joke about +
Dazai’s suicidal ideation, but you can’t exactly blame them for that, because the show itself makes it into a light hearted issue on a surface level.

There are, however, people who make jokes about executive dysfunction. I personally don’t enjoy jokes about Dazai never taking +
showers or not brushing his teeth. It makes me, as a person who has had days where I can’t even get out of bed because I just feel that bad, feel like shit.

I also understand, however; that many people who make those jokes are struggling with their own Mental health, and that +
in a way they’re really just poking fun at themselves, and they don’t mean anything harmful by it. So I don’t take it personally.

What does bother me, however, are the attacks laid against Dazai’s character because he doesn’t fit the stereotypical behavior we associate with +
depression.

Because he’s goofy, playful, and he jokes about his own attempts on his life.

In No Longer Human, the main character, Oba, hides his own pain behind the mask of a clown in order to be able to form close relationships.

The book also touches on the fact that Oba +
was abused as a child.

When you experience trauma as a child, you don’t +
have the coping mechanisms required to process those events in many cases.

Which is why, for many people, normalization is such a common form of coping.

And, given how parallel Dazai’s character is with Oba’s, it’s very likely he experienced similar abuse. It’s already +
heavily implied in the scene where we see him at 14, and I can barely bring myself to look at this frame without feeling like I’m being kicked in the gut.

I’ve discussed it before in my prior analyses on Dazai’s character, but he depicts many of the different modalities of + 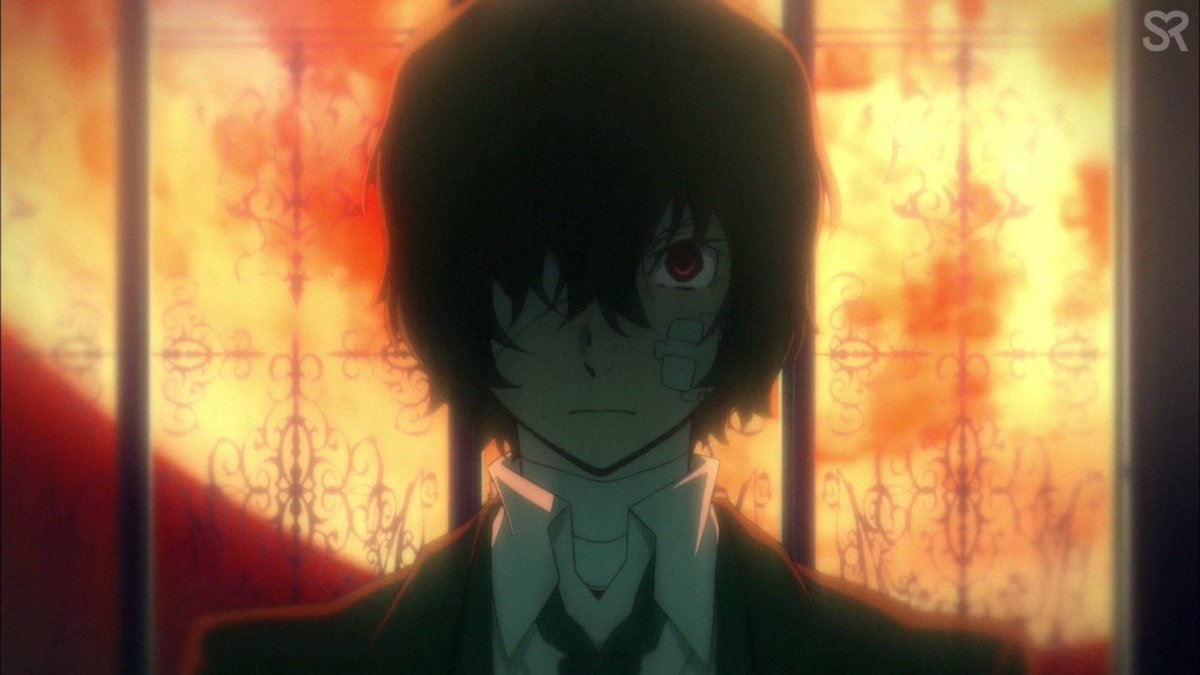 depression, and it isn’t always some obvious scream for help that everyone thinks it is.

Think it’s shitty and unrealistic, the way the ADA makes jokes about Dazai‘s Suicide attempte? Sure, it’s shitty, but it’s not unrealistic.

People have joked, to my face, about mine.
My friends. Family members. One of my teachers.

It’s shitty, but people minimize it because the concept of depression makes them uncomfortable.

And many people like Dazai—or myself for that matter—weaponize humor in order to minimize their own depression.

Because I promise +
it makes us even more uncomfortable than you are.

It’s really fucking hard for me to tell someone when I’m sad, because I don’t want to be /treated/ like I’m sad.

And it’s really not hard to imagine that Dazai might feel the same way. Or that the vast majority of the people +
in his life might not know he isn’t joking when he asks the waitress to commit suicide with him. Or, that he can still be a silly person while he’s struggling.

The worst times in my life were when people thought I was at my best. My closest friends didn’t know anything was +
wrong with me until years after the fact. As a matter of fact, I dropped my closest friend in the /world/ for a /year/, just because I knew if I let her stay close, she would know that I wasn’t kidding.

I still struggle to talk about my own feelings or the things that have +
happened in my life without trying to make it into a joke. My therapist has told me multiple times, that he thinks I’m the funniest person he’s ever met.

And my dad has told me that he wishes I didn’t have to be.

So when people say, “S1 Dazai is a joke, garbage, it’s +
offensive to people who have struggled with depression, it minimizes the IRL Dazai’s work and experiences—“

It makes me sit there and look at myself, and wonder if I should be offended by my own coping mechanisms, or if ignorant, self absorbed strangers in the internet should +
take a moment to realize that not every single person with depression is the main character from 13 Reasons Why, that mental illness doesn’t only touch people who are vocal about their sadness, and qualifying how mentally ill people SHOULD be portrayed is a fucked up thing to do.
Because you can’t look at me and tell me I’m an underdeveloped stock character because I like to laugh off things that make me sad because I don’t know how to handle it, can you?

So, I’m not saying you can’t disagree with me, I’m just saying that when you make that argument +
you’re hurting people who don’t express their trauma in a way that YOU don’t perceive as acceptable.

And if you’ve done that, you aren’t a bad person. You don’t deserve to be “cancelled” or vilified. But you have an opportunity for growth, because that argument displays a +
level of emotional immaturity that isn’t just going to hurt other people, it’s going to hurt your own relationships with others.

So do some soul searching. Reach out to the people in your life and actually listen to them. And maybe, after that, you can rewatch the show and +
have a better experience.

Because for me, this scene makes me feel legitimately happy, and I wouldn’t trade it, or Dazai’s character, for the world.

You can follow @cataclysmiceve1.
Tip: mention @twtextapp on a Twitter thread with the keyword “unroll” to get a link to it.