https://wap.business-standard.com/article-amp/news-ani/baloch-sindhi-and-pakistani-minorities-to-move-unhcr-against-language-oppression-116022700168_1.html
40/51
The loss of East Pakistan triggered understandable paranoia in what remained of Pakistan after. The Muslim League intensified its efforts around the One Unit campaign and began active Urdu imposition as part of its anti-Balkanization measures. Balochistan was one victim.
41/51
Despite its rich ethnic identities, Pakistan's polity was heavily dominated by imports from India's UP. The Muhajirs. They spoke Urdu. And their numerical minority did little to impede their influence. The most influential of these Muhajirs was PM Liaquat Ali Khan.
42/51
The Baloch aren't barred from speaking Balochi, never were. But the language is not taught in government schools, even though Arabic is. Result? People can speak but not read or write their own mother tongue. It's Urdu all the way. https://www.dawn.com/news/871217/teaching-balochi-in-schools
Teaching Balochi in schools

IT is astonishing that students in Punjab study Punjabi, in Sindh they are taught Sindhi, in the NWFP they are ...

https://www.dawn.com/news/871217/teaching-balochi-in-schools
43/51
Sindhi is spoken by somosto 15% of Pakistan, mostly in the Sindh province. Still the language of instruction in the province remains Urdu. At best, it's toggled between Urdu and English, but never Sindhi.
http://www.ccsenet.org/journal/index.php/ijel/article/download/75572/41714
44/51
Barring a tiny minority of Muhajirs in Karachi, nobody really speaks Urdu as a native tongue in Sindh. But Urdu continues to dominate the landscape with even private schools shying away from Sindhi since the language isn't an essential for jobs. https://nation.com.pk/10-Sep-2015/the-imposition-of-urdu?version=amp
The Imposition Of Urdu

On Tuesday the Supreme Court of Pakistan, dug up long-forgotten clauses from the constitution and ordered the federal and provincial governments to make Urdu the

https://nation.com.pk/10-Sep-2015/the-imposition-of-urdu?version=amp
45/51
Coming to Punjab, let's just say the discrimination is toxic and that's an understatement. English used to be the Language of instruction in schools for some time, not anymore. Now its Urdu. But never Punjabi, the most spoken language of the country. https://gulfnews.com/amp/world/asia/pakistan/punjab-announces-urdu-as-medium-of-instruction-at-schools-from-next-year-1.65478438
Punjab announces Urdu as medium of instruction at schools from next year

https://gulfnews.com/amp/world/asia/pakistan/punjab-announces-urdu-as-medium-of-instruction-at-schools-from-next-year-1.65478438
46/51
So what does it mean for a language to be given the third-class treatment in its own birthplace? Here's one example.
https://blogs.tribune.com.pk/story/41936/punjabi-is-a-regional-language-not-a-form-of-hate-speech-beaconhouse/ 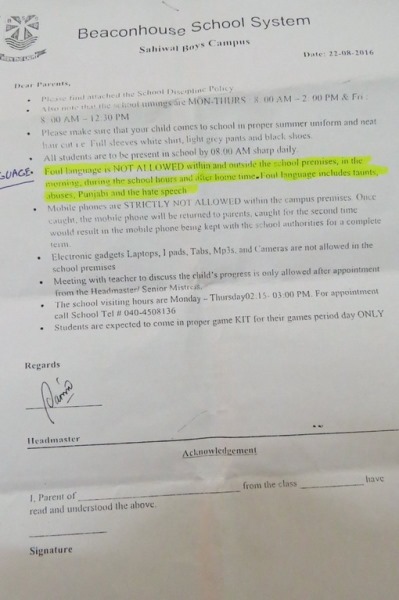 47/51
The list of languages reduced to second-class citizenship in their own country is too long for one Twitter thread, but the imposition is as real as it gets. On our side of the border, Kashmiri remains one notable casualty. First Urdu's, now Hindi's. https://thelogicalindian.com/amp/news/jammu-kashmir-urdu-hindi-language/
Hindi Touted To Be New Official Language Of J&K, Kashmiris Call It Imposition

A day before Jammu and Kashmir officially became a union territory, Bharatiya Janata Party’s (BJP’s) national secretary, Tarun Chugh said that now Hindi will be the first and official language of...

https://thelogicalindian.com/amp/news/jammu-kashmir-urdu-hindi-language/
48/51
Language chauvinism isn't just a matter of one language killing another, no, it's much more than that, for language represents culture. Urdu hegemony isn't just killing indigenous tongues but also the cultures that embody — the literature, the history, the whole shebang.
49/51
One prime example is the legacy of Dulla Bhatti. Once a Punjabi icon, one whose composition, Sundari-Mundari still remains a Lohri staple, his grave remains a neglected piece of concrete in his own land today. Never acknowledged and rarely visited.
50/51
All of the above said, let's be abundantly clear that this hegemonic attitude isn't an Urdu monopoly. English did it to Welsh and Gaelic, French to Breton, Hindi to Haryanvi, Marwari, and countless other tongue...the list is long.
51/51
One may argue that it's not illegal for one to speak their native tongue. True, but that's not how language imposition works. A far more efficient way is to gradually edge it out of education. Label it "low language." Make it redundant.

That's what happened in Pakistan.
You can follow @Schandillia.
Tip: mention @twtextapp on a Twitter thread with the keyword “unroll” to get a link to it.