Read on Twitter
Great Britain has gone two month without coal and yes, that is a big deal.

It's gone from 40% coal powered to ~2% in 8yrs. And plenty for other countries to learn from the experience.

How did it happen and what does it mean? 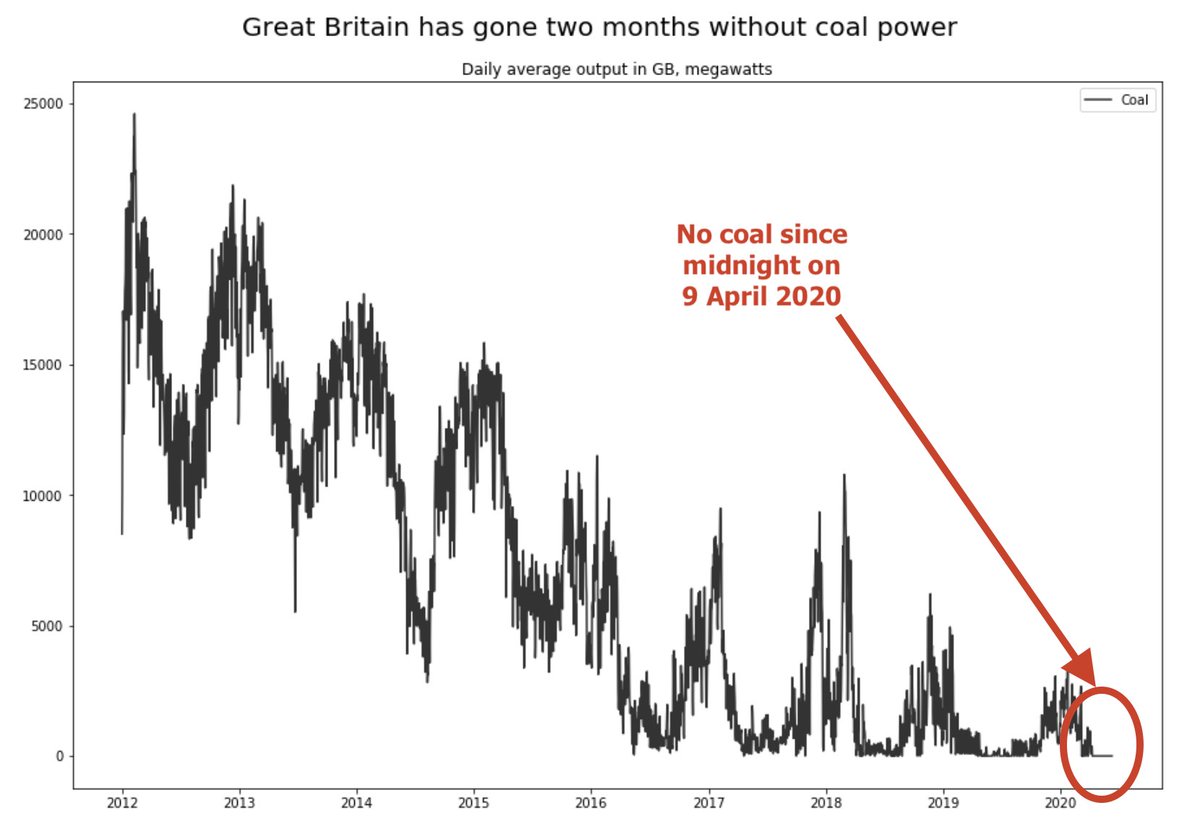 During the coal-free two months, renewables were the largest source of electricity in Britain 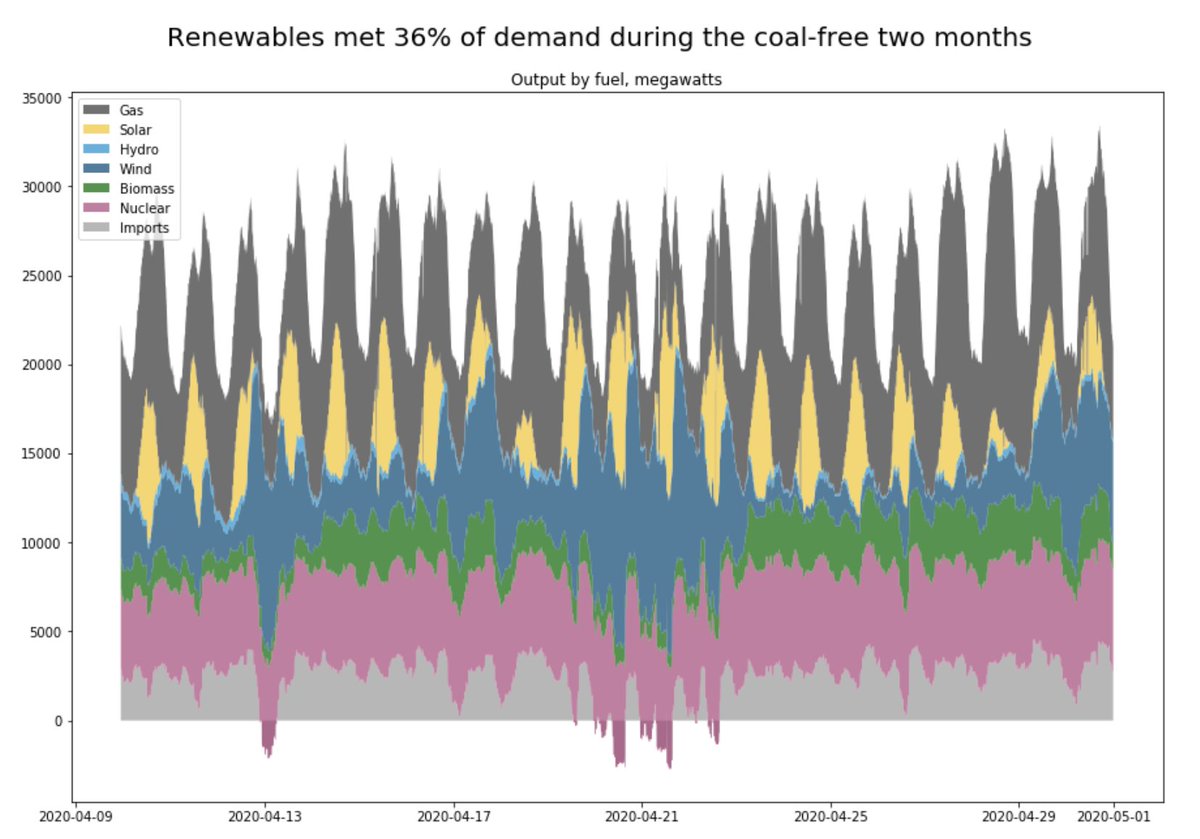 In fact, British renewables have generated more electricity in 2020 to date than all fossil fuels together.

Renewables might -or might not- beat fossil fuels over the full year, but the trend is only going in one direction: 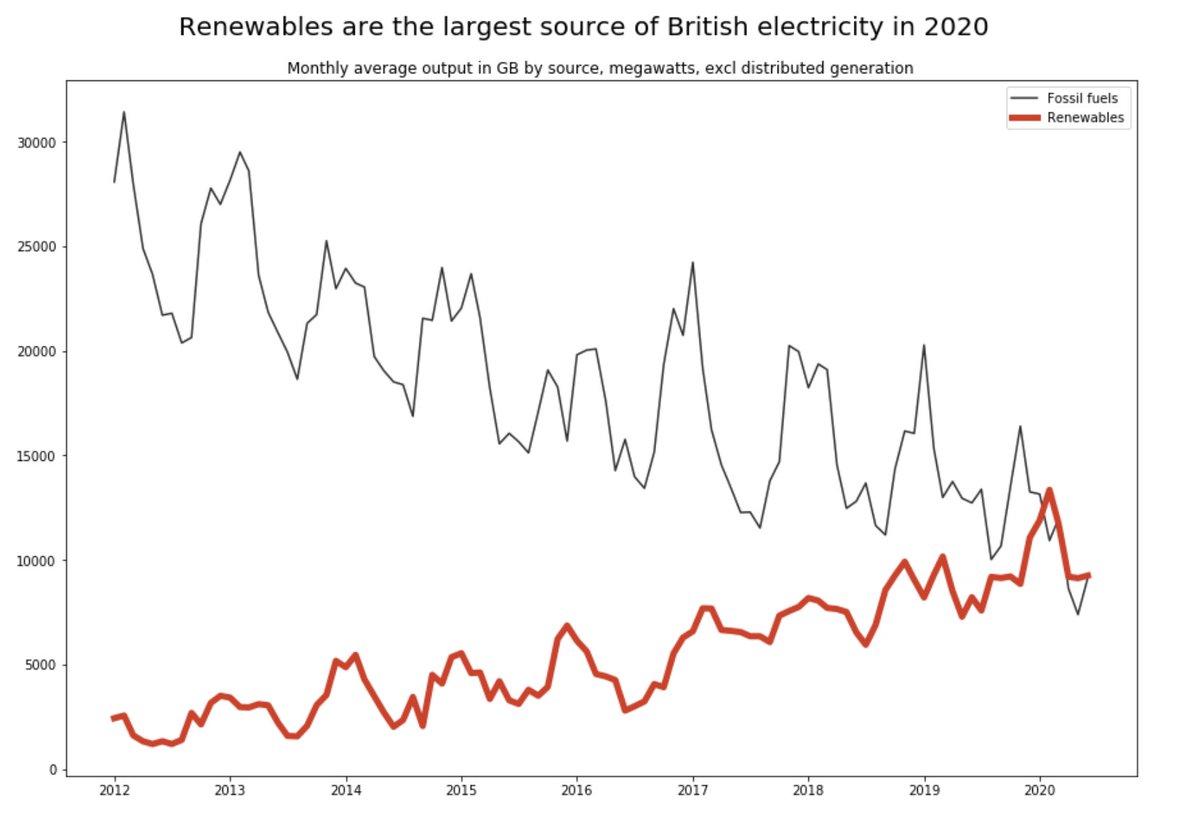 When will the coal-free run end?

Nothing's guaranteed, but it will probably continue until the end of the summer.

That would push the record out towards five months without coal power in Britain. 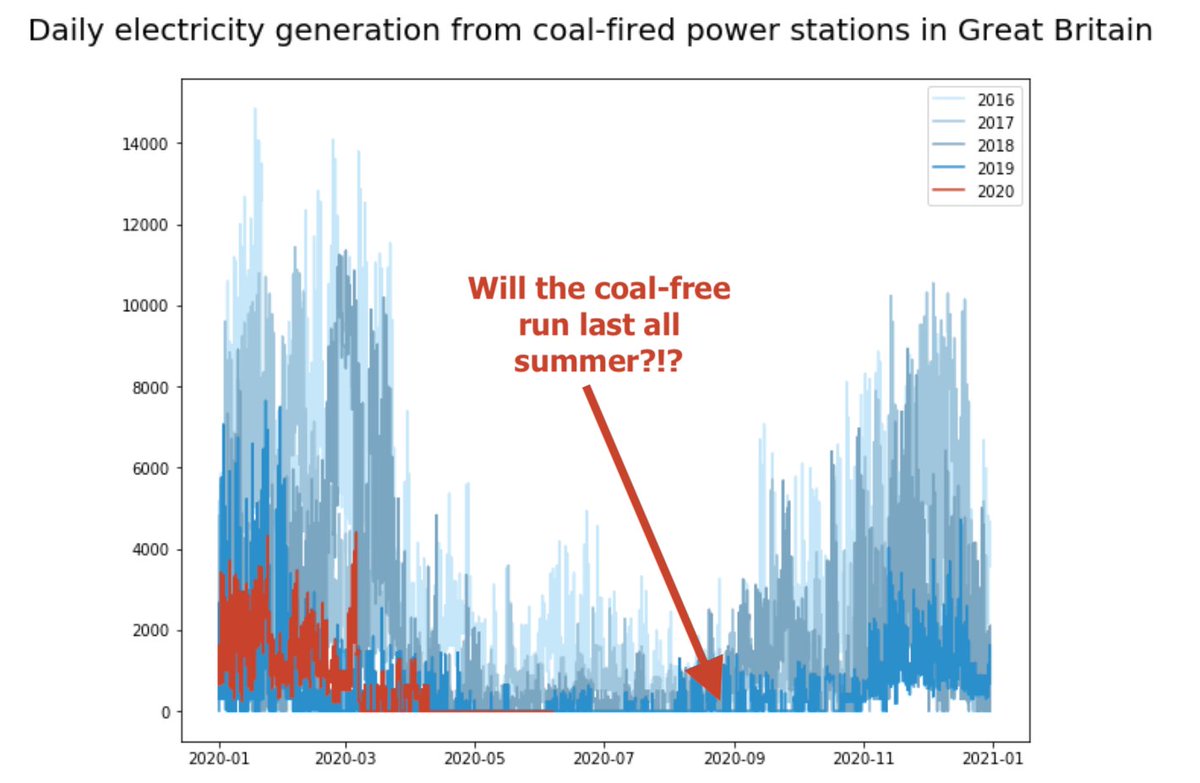 How is this possible?

The big picture is that coal is being squeezed out of the British electricity mix by falling demand and renewables.

The same goes for gas. 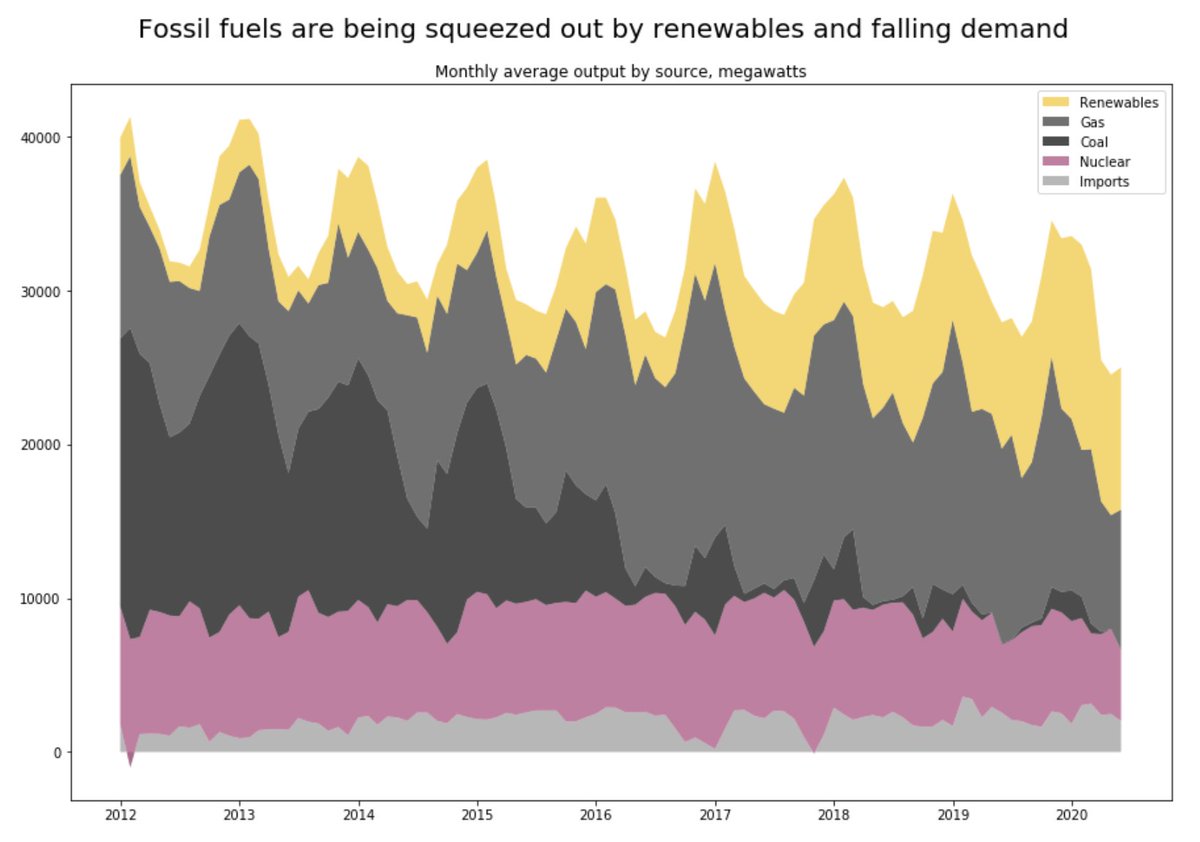 But there's also been a tragic contributor to the situation we're in today: The coronavirus lockdown

During the two months without coal, demand has been 15% lower than in the same period last year.

(Demand was already falling yr-on-yr; this is additional) 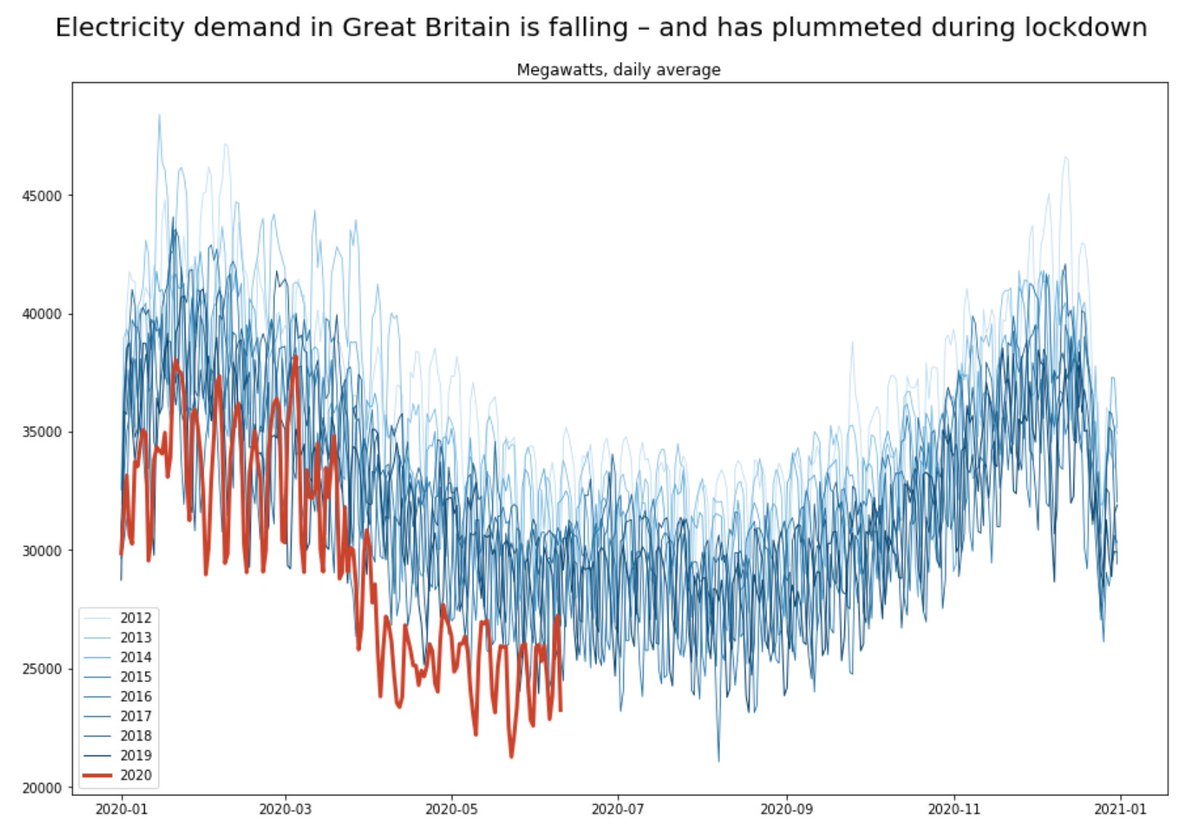 The transformation in Britain's electricity mix isn't just about coal (did I say that already?) 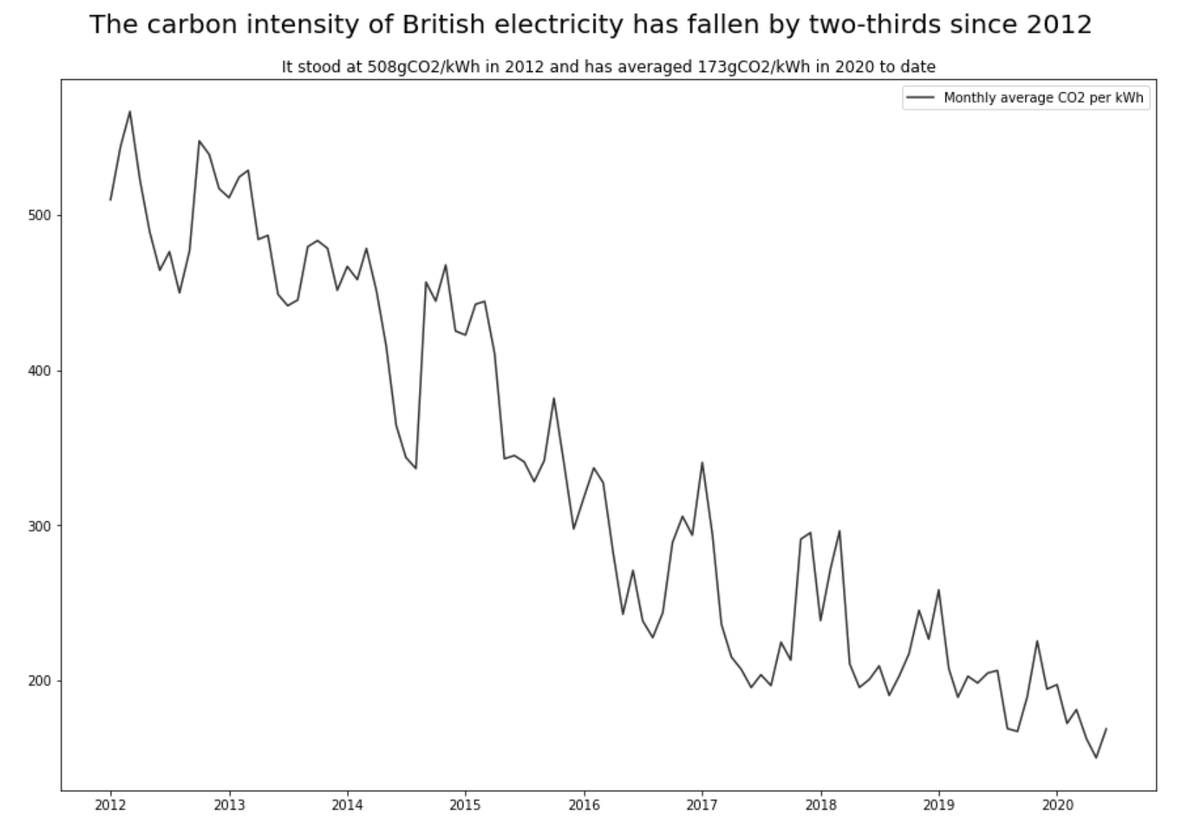 The reduction in the carbon intensity of British electricity is so amazing, I decided to make a second chart to show it in a different way. 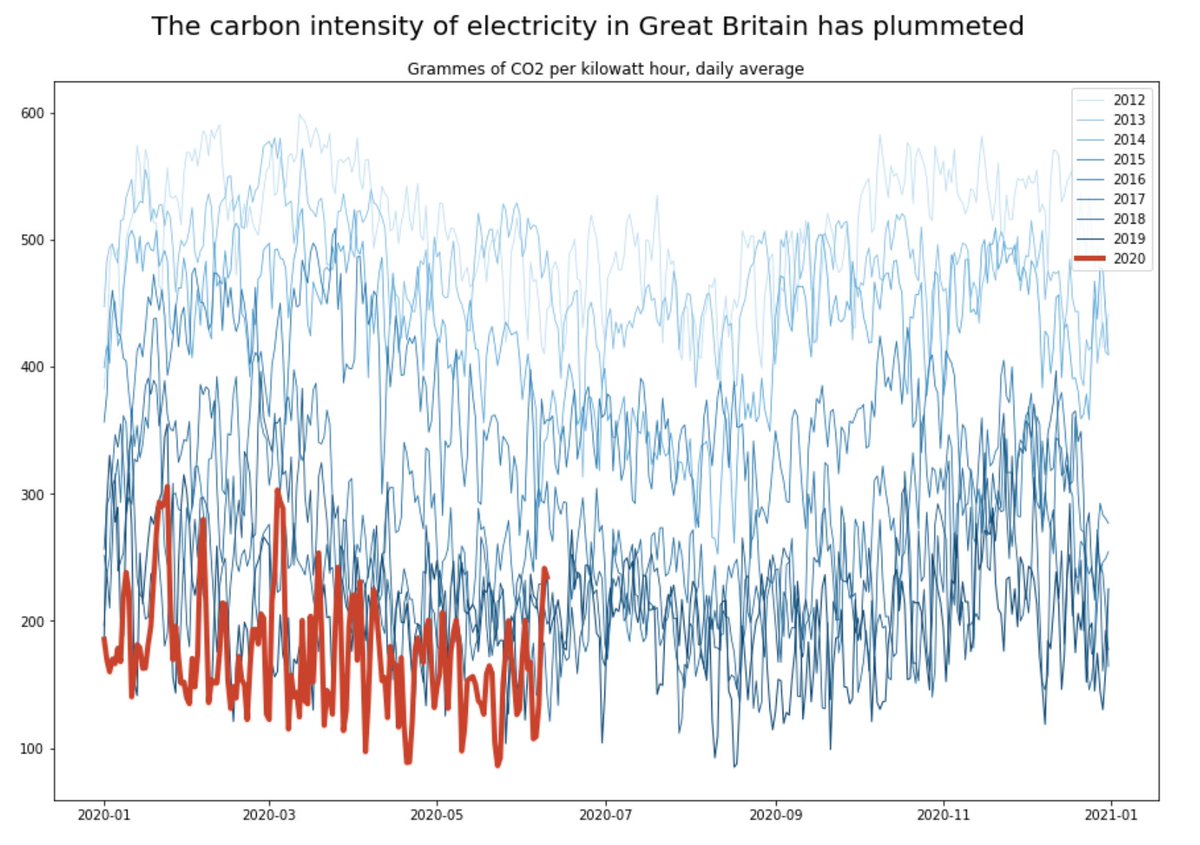 If you want to learn more about how Britain got off coal, check out our interactive. There isn't just one reason!

https://interactive.carbonbrief.org//how-uk-transformed-electricity-supply-decade/#
Final thought: UK carbon emissions have fallen fast over the same period as we were getting off coal power.

Guess what – coal was the biggest factor.

Now it's almost gone, the country must tackle emissions from elsewhere. Transport is number one source. 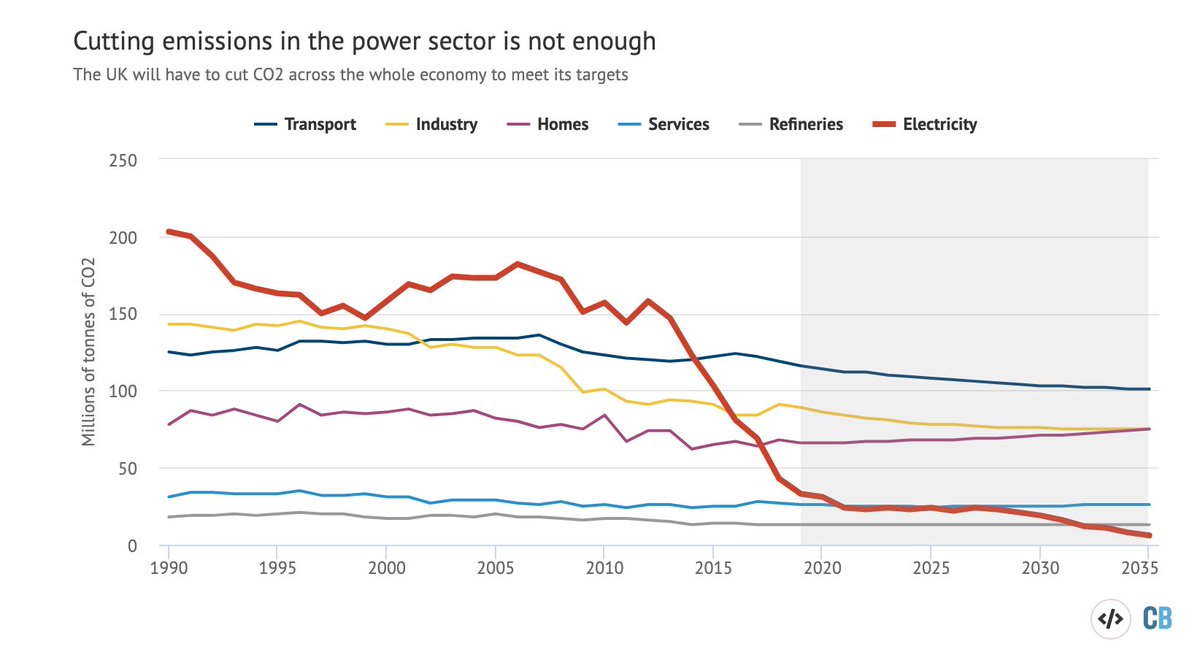 And now the small print:

Data covers transmission-connected generation in GB only. That means it misses out a bunch of windfarms (and some industrial gas). The true share for renewables will be higher than reported here and CO2/kWh lower.

Yes, some imports could contain coal. But Belgium doesn't have any coal plants, FR hardly any & NL has barely been using its coal fleet.

Of the 2% from NL, last I checked around 10% was from coal, so we're talking about 0.2% of GB supplies. https://www.carbonbrief.org/analysis-coronavirus-has-cut-co2-from-europes-electricity-system-by-39-per-cent
Analysis: Coronavirus has cut CO2 from Europe's electricity system by 39%

The coronavirus pandemic has seen entire countries locked down, with businesses, industry and travel all curtailed in an effort to limit the spread of Covid-19.

Yes, about 2/3 of biomass is wood pellets at Drax, Lynemouth etc. Most of those pellets are imported from North America and some say they raise emissions.

The amount of electricity generated by low-carbon sources in the UK stalled in 2019, Carbon Brief analysis shows. Low-carbon electricity output from wind, solar, nuclear, hydro and biomass rose by...

https://www.carbonbrief.org/analysis-uk-low-carbon-electricity-generation-stalls-in-2019
late additions in response to question from @PhilippLitz on the political economy angle…

You can follow @DrSimEvans.
Tip: mention @twtextapp on a Twitter thread with the keyword “unroll” to get a link to it.