Read on Twitter
Dear Mr. President, I watched with great pride as you humbly spoke of your legacy: democracy, SGR, miles of roads...

So I have taken the liberty to list some of your other achievements that surpass those of all other administrations combined
1/
A thread, if you will... 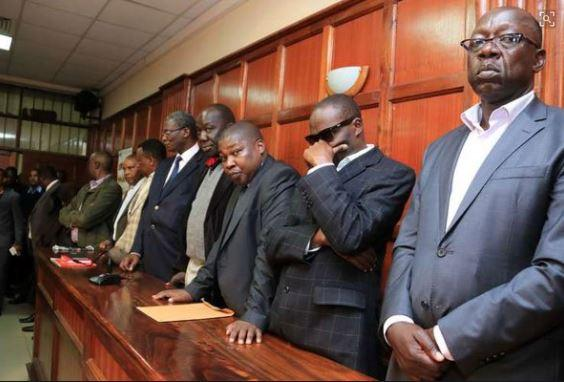 2/
Am a little surprised that you didn't mention oil exportation.

After all, we celebrated the Sh1.2bn received after selling 240,000 barrels of crude oil to China.

Looks like we might eventually recover the Sh200bn that Tullow billed us the other day. https://www.businessdailyafrica.com/economy/Tullow-shocks-State-with-Sh204bn-Turkana-/3946234-5486560-117dka6/index.html
Tullow shocks Government with Sh204bn Turkana oil bill

The Ministry of Petroleum rejects Tullow’s compensation bill, arguing it was excessive and not justified.

https://www.businessdailyafrica.com/economy/Tullow-shocks-State-with-Sh204bn-Turkana-/3946234-5486560-117dka6/index.html
3/
Then there's the small matter of Sh100bn supposedly lost in 6 months through the ingenuity of KRA and KPA officials, who allowed the importation of contraband goods without the exchequer seeing a single cent in taxes.

Detectives who had gone to the port of Mombasa to investigate the entry of contraband goods stumbled on evidence of how rogue officials fleece public.

https://www.standardmedia.co.ke/article/2001292078/how-kra-crooks-stole-sh100b-in-six-months
4/
While on the subject of contraband goods, how could we forget the wonderful copper, mercury and yeast-containing sugar that your administration so generously gifted us with over the last few years.

https://www.nation.co.ke/news/Contraband-sugar-contains-mercury-says-Fred-Matiang-i/1056-4609994-4sc5adz/index.html
5/
Onto healthcare and this is an area that your administration has paid particular attention to.

For instance, we seem to have donated Sh63bn to suppliers of medical equipment under the MES contract. A contract that even the AG disavowed https://www.standardmedia.co.ke/health/article/2001360364/ag-disowns-sh63-billion-health-ministry-deals
AG disowns Sh63 billion Health ministry deals

Attorney General says contracts on medical equipment leasing were negotiated and signed without his approval.

https://www.standardmedia.co.ke/health/article/2001360364/ag-disowns-sh63-billion-health-ministry-deals
6/
Connected to this is your generosity in paying the suppliers 5 times the going rate for the equipment.

Ordinarily, a unit costs between Sh40-45 million at the current market prices, but the Ministry of Health procured each at a whooping Sh227 million https://www.nation.co.ke/news/Sh7bn-scandal-hits-Health-ministry/1056-4619498-hs9tysz/index.html
Sh7bn scandal hits Health ministry

https://www.nation.co.ke/news/Sh7bn-scandal-hits-Health-ministry/1056-4619498-hs9tysz/index.html
7/
Still on affordable healthcare how could we forget Mafya House?

https://www.businessdailyafrica.com/news/Revealed--Taxpayers-lose-Sh5bn-in-NYS-style-Afya-House-theft/539546-3430494-cufcplz/index.html
8/
Connected to the ingenuous Mafya House, I recall the mobile clinics project, which was a nice touch seeing as how everything has gone mobile these days.

And those only cost us Sh800mn.

I understand they are now at Mathari Hospital.

Scam laden MoH containers moved in the dead of night

https://www.nation.co.ke/news/Clinics-in-MoH-scam-moved-to-Mathari-as-questions-still-linger/1056-5300208-qkpght/index.html
9/
Your efforts to boost NHIF in order to insure all Kenyans have been commendable.

At last count, we had donated about Sh10bn as NHIF officials and hospitals’ administrations conspired to double-charge the Government in medical bills. https://www.standardmedia.co.ke/health/article/2001314296/over-sh10b-feared-lost-in-new-nhif-pay-scandal
Over Sh10b feared lost in new NHIF pay scandal

"Four years later, the insurer has splashed Sh1.88bn in streamlining its revenue streams, which documents before the NHIF board indicate is nearly 5 times the cost of purchasing such a software." https://www.nation.co.ke/news/NHIF-scandal--How-the-theft-of-billions-unfolded-from-2014/1056-4891474-cmw6yy/index.html
NHIF scandal: How theft of billions unfolded from 2014

NHIF scandal: How theft of billions unfolded from 2014

https://www.nation.co.ke/news/NHIF-scandal--How-the-theft-of-billions-unfolded-from-2014/1056-4891474-cmw6yy/index.html
11/
Onto Youth Empowerment and the tremendous efforts put into NYS by your administration are quite honestly, mind-blowing, your excellency.

The number of young, German-fluent beneficiaries of this scheme is quite literally innumerable. https://www.nation.co.ke/dailynation/news/revealed-firms-that-gained-from-sh9bn-nys-scandal-44656
Revealed: Firms that gained from Sh9bn NYS scandal

https://www.nation.co.ke/dailynation/news/revealed-firms-that-gained-from-sh9bn-nys-scandal-44656
12/
In March this year, we learned that NYS had mobilised yet another Sh10bn to empower the youth over the last several years

Your magnanimity towards the youth, Mr President, is a godsend to our great republic. https://www.nation.co.ke/news/NYS-reels-under-a-fresh-Sh10bn-theft-scandal/1056-4558744-svant7/index.html
NYS reels under a fresh Sh10bn theft scandal

https://www.nation.co.ke/news/NYS-reels-under-a-fresh-Sh10bn-theft-scandal/1056-4558744-svant7/index.html
13/
Mr President, your desire to ensure that every Standard One pupil was equipped with a laptop in the digital age is groundbreaking.

We know that this is a work in progress and soon all our children will be writing world-class software. https://www.businessdailyafrica.com/news/Sh15bn-school-laptops-pay-vouchers-missing/539546-4809626-hk3xnd/index.html
Sh15bn school laptops pay vouchers missing

https://www.businessdailyafrica.com/news/Sh15bn-school-laptops-pay-vouchers-missing/539546-4809626-hk3xnd/index.html
14/
For decades Mr President, our young nation has suffered the scourge of water scarcity.

To then learn that your administration donated over Sh21bn to ensure water sufficiency for all is something that melts my heart to no end.

https://citizentv.co.ke/news/how-ksh-21-billion-vanished-in-arror-kimwarer-dams-scandal-233551/
15/
On food sufficiency the Israelis say it best

“In the history of Israel, no government-to-government development project has ever failed. I am talking about the Galana-Kulalu irrigation project. It is the first ever to fail in the history of Israel,” https://www.nation.co.ke/oped/opinion/A-sad-envoy--pitiless-maize-cartels/440808-5273496-eu9imtz/index.html
A sad envoy, pitiless maize cartels and Israel’s first failure

https://www.nation.co.ke/oped/opinion/A-sad-envoy--pitiless-maize-cartels/440808-5273496-eu9imtz/index.html
16/
So astounded were the Israelis by the the determination of your administration to ensure food security for the nation via Galana-Kubafu that they left after realising that we already had expertise that exceeded their very own. https://www.nation.co.ke/news/Sh7-billion-Galana-Kulalu-project-collapses-/1056-4995288-3n1885z/index.html
Sh7bn Galana Kulalu project collapses after Israeli firm leaves

https://www.nation.co.ke/news/Sh7-billion-Galana-Kulalu-project-collapses-/1056-4995288-3n1885z/index.html
17/
Over and above this, Mr President, your efforts to ensure that we never run out of maize are a regional first.

Another mega corruption scandal has erupted at the National Cereals and Produce Board (NCPB). Eight traders have allegedly been paid Ksh.1.9 billion in the last three or so months alone.

https://citizentv.co.ke/news/ncpb-ceo-resigns-5-top-managers-sent-home-over-ksh-1-9b-maize-scandal-201194/
18/
Speaking of going digital, your administration registered 36mn of a total of 47mn Kenyans under Huduma Namba

So secure is the data that not a single Kenyan has received their Huduma Namba to date.

Your commitment to data security is A-1, excellency. https://www.the-star.co.ke/news/2019-05-24-36-million-registered-for-huduma-namba/
36 million registered for Huduma Namba

https://www.the-star.co.ke/news/2019-05-24-36-million-registered-for-huduma-namba/
19/
Still on Huduma Namba, we understand that the government spared no expense in ensuring that all our data was collected and stored securely.

Over and above the Sh7.7bn already invested, your administration will invest an additional Sh1bn. https://www.standardmedia.co.ke/article/2001350202/huduma-namba-to-gobble-up-another-sh1-billion
Huduma Namba to gobble up another Sh1 billion

https://www.standardmedia.co.ke/article/2001350202/huduma-namba-to-gobble-up-another-sh1-billion
20/
Onto matters security now and last year we learned that your administration was building a wall on the Somalia border that will make Trump's wall look like child's play.

He can never match the Sh350mn being spent on every kilometer of wall built. https://www.bbc.com/news/world-africa-47574463
The border wire fence that cost millions

MPs in Kenya are demanding an investigation into how 10km of wire fencing ended up costing $35m.

https://www.bbc.com/news/world-africa-47574463
21/
Imagine my delight at learning that we installed such a sophisticated integrated command, control and communication (IC3) system, that we are hardly utilising it

At Sh15bn awarded to Safaricom in 2014, this is certainly futuristic in its conception https://www.nation.co.ke/oped/opinion/We-are-underutilising-our-Sh15-billion-security-system/440808-4955382-14f45dtz/index.html
We are underutilising our Sh15 billion security system

NGANGA: We are underutilising our Sh15 billion security system

https://www.nation.co.ke/oped/opinion/We-are-underutilising-our-Sh15-billion-security-system/440808-4955382-14f45dtz/index.html
22/
Mr President, you touched on getting electricity to every home

So successful have your efforts been that... "more than 880,000 households that were supplied with electricity and had prepaid meters fitted did not consume the power" https://www.businessdailyafrica.com/corporate/companies/Connecting-poor-hands-Kenya-Power-Sh3bn-debt/4003102-4878676-bb1m98/index.html
Connecting the poor hands Kenya Power Sh3bn debt

Firm says more than 800,000 households not using electricity despite being on the grid

https://www.businessdailyafrica.com/corporate/companies/Connecting-poor-hands-Kenya-Power-Sh3bn-debt/4003102-4878676-bb1m98/index.html
23/
This in turn has seen the ever resourceful Kenya Power donate over Sh4.5bn to power transformer suppliers.

Some say that the transformers supplied were bogus and defective... but what do I know?

At least they are doing the best they can. https://www.nation.co.ke/news/Kenya-Power-yet-to-locate-files-/1056-4971988-bkah5dz/index.html
Kenya Power yet to locate files in bogus transformers case

After all, schools are going digital. https://www.nation.co.ke/news/How-timber-mafia-walked-away-with-Uhuru-s-Sh2-billion/1056-4583076-2vqj99z/index.html
How timber mafia walked away with Uhuru's Sh2 billion

How Uhuru’s Sh2bn got lost in the forest

https://www.nation.co.ke/news/How-timber-mafia-walked-away-with-Uhuru-s-Sh2-billion/1056-4583076-2vqj99z/index.html
25/
Aside from SGR, your excellency, the Chinese also assisted in the offloading of Sh1.4bn from the Geothermal Development Company in a brazen act that can only symbolize how close the relationship is, that we have with our brothers from the East. https://www.standardmedia.co.ke/article/2001318858/exposed-how-kenya-lost-sh1-4b-to-china-companycharged-over-ksh-1-9b-scandal-222635/
Exposed: How Kenya lost Sh1.4b to China company

https://www.standardmedia.co.ke/article/2001318858/exposed-how-kenya-lost-sh1-4b-to-china-companycharged-over-ksh-1-9b-scandal-222635/
You can follow @surambaya.
Tip: mention @twtextapp on a Twitter thread with the keyword “unroll” to get a link to it.