Read on Twitter
Scores of Kenyans gave life, limb and liberty to ensure that we attained self-rule and the ability to govern ourselves.

1/
Some of these heroes have been forgotten in the sands of time but we must never let them be forgotten.

Here are a few. 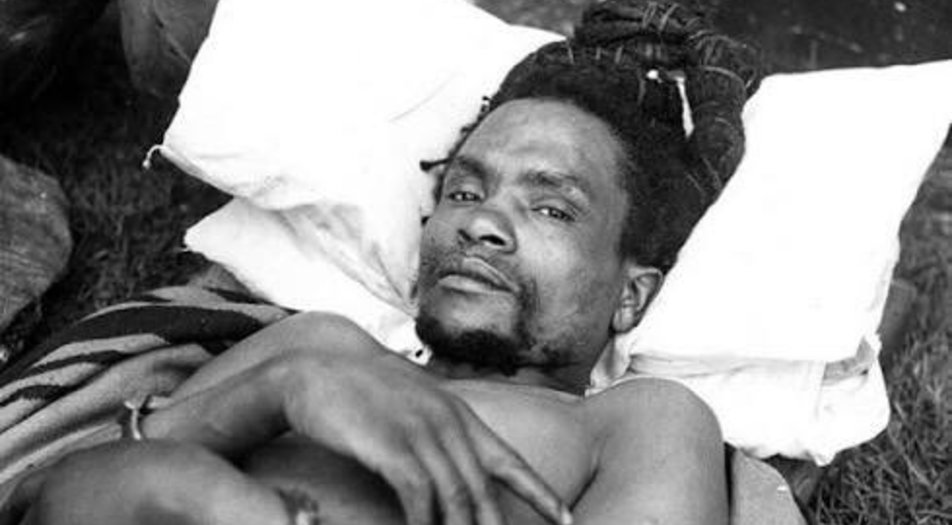 CMG attended St Mary’s School, Yala, Makerere and Cardiff Univ where he obtained a Law degree and got admitted to the bar (Lincoln's Inn) in 1951.

Offered a third of what whites were getting at the Attorney General's office, CMG declined. 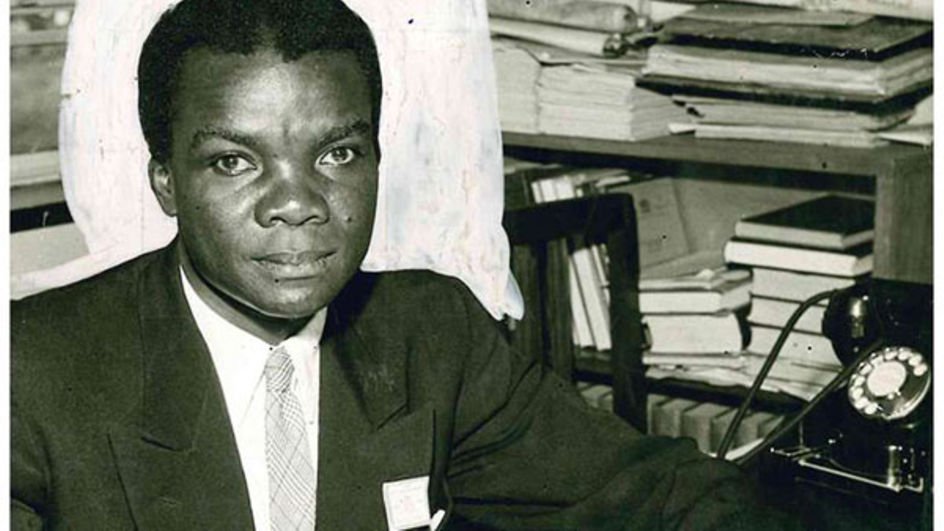 3/
He started his own law firm at Church House and was the only African in Kenya with a law firm.

He made his name defending Mau Mau cases — saving many, including Waruru Kanja, and 48 Lari Massacre accused, from the hangman’s noose. 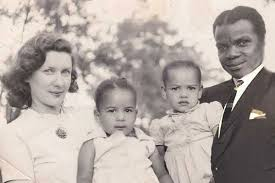 4/
In 1963, President Kenyatta appointed Argwings-Kodhek an assistant minister for Defence.

In 1966, he joined the Cabinet as the Minister of Natural Resources and eventually in 1967 as Minister of State for Foreign Affairs. 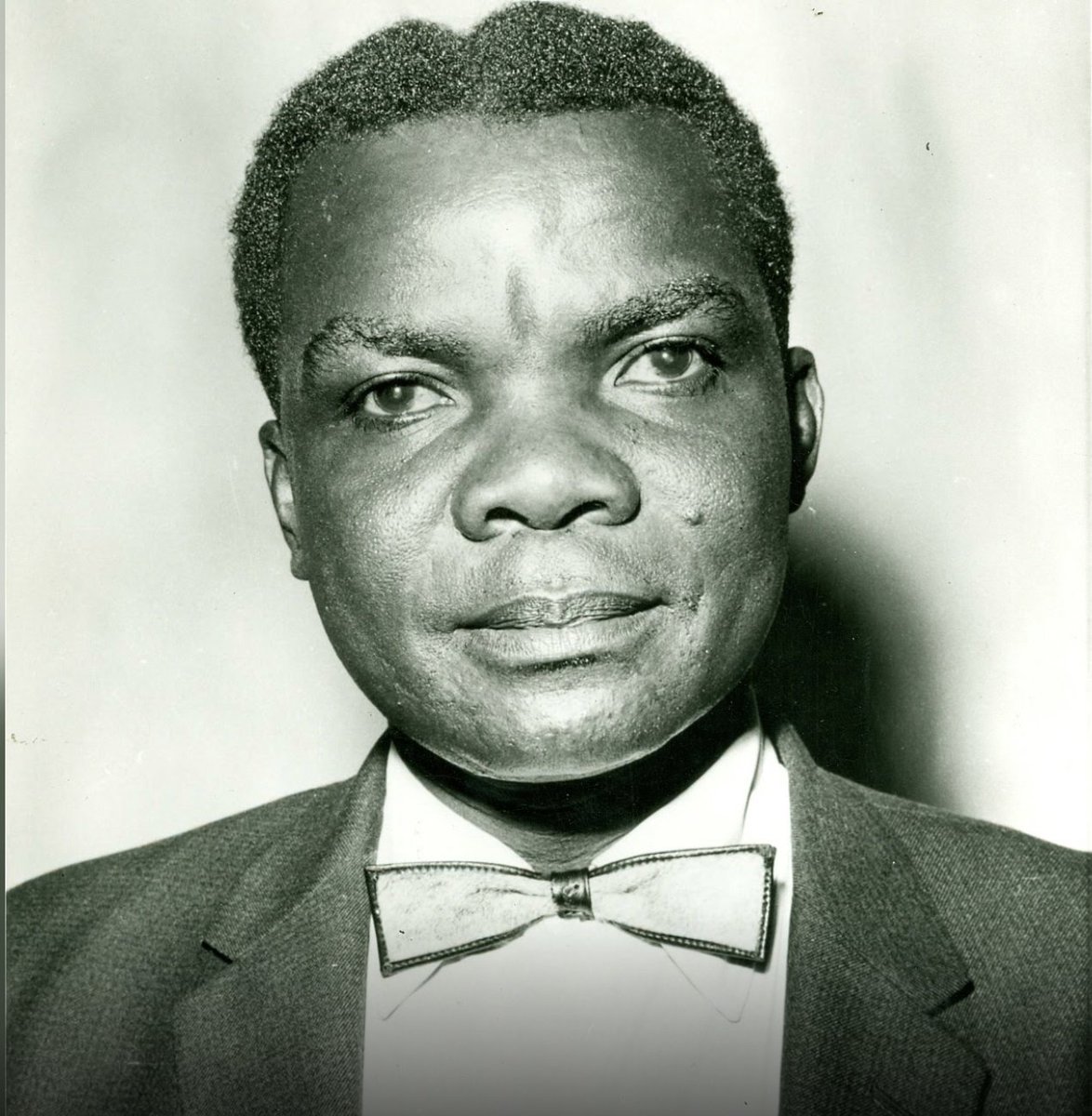 As a journalist, Pinto was rounded up in Operation Anvil and spent 4 years in detention on Manda Island and a year confined at Kabarnet.

In 1964 he was involved in establishing the Lumumba Institute in 1964 which later came to haunt him... 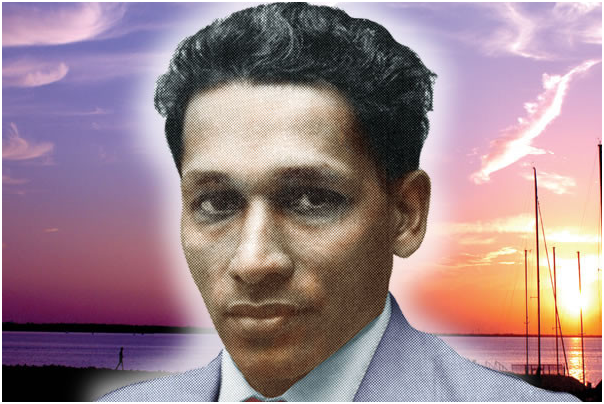 6/
The Lumumba Institute was funded by the Russians and had a board consisting of Kaggia, Ngei, Murumbi, Kungu wa Karumba and Oneko. The title of the Ruaraka land was in Jaramogi's name, then a trustee.

It was later closed & is today part of PAC Uni.

7/
Pinto used to tell his wife that his salary was half what he earned and gave out the rest to the poor.

Pinto fought for a better lifestyle for poor Kenyans.

He was assassinated in 1965 by Kisilu Mutua who confessed in 2001 after his release. 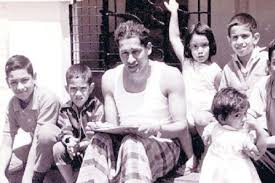 8/
Kungu Karumba (1904-1974) was a nationalist, freedom-fighter and part of the Kapenguria 6 arrested in 1952 for involvement with the Kenya Land and Freedom Army (aka Mau Mau)

After independence, Karumba who wanted to be a DC was turned down by Kenyatta and went into business 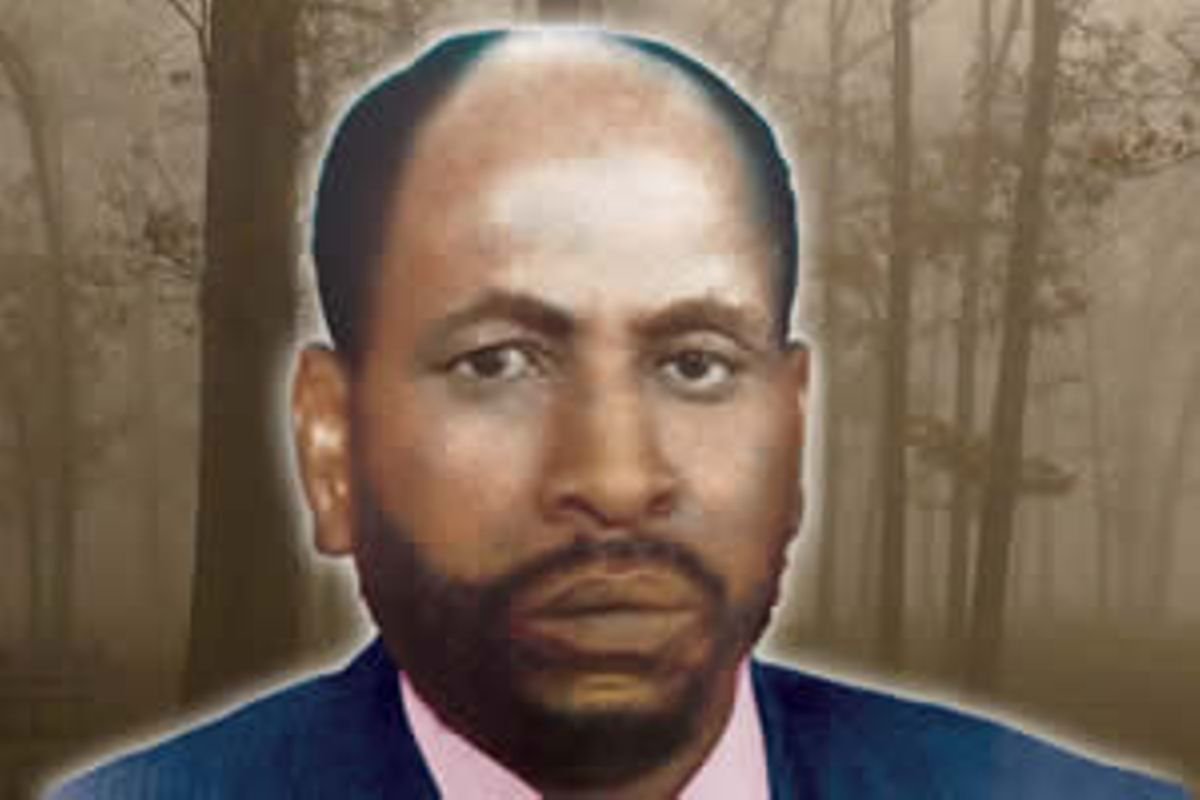 9/
Karumba formed a trucking company and went into textiles.

According to chronicler Karari Njama, ole Kisio was the fourth most powerful KLFA general with an army of about 800 fighters operating from Melili Forest

https://en.wikipedia.org/wiki/Kurito_ole_Kisio
11/
“His valour would later see his then pregnant wife, Miriam Enekurito, become the first person to be arrested for collusion with the Mau Mau. She was tortured until Kisio was killed in 1954” -Shiraz Durrani

Mau Mau and its Legacy of Resistance to Colonialism and Imperialism 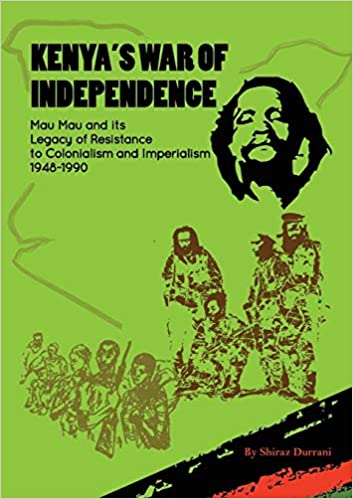 12/
Joseph Zuzarte Murumbi (1911 – 1990) was Kenya's second VP and played a key role in securing legal counsel for the detainees arrested. Together with Pio Gama Pinto, he resisted the continuance of British Imperial dominion in Kenya

13/
Ramogi Achieng Oneko (1920–2007) was a Kenyan freedom fighter and a politician. Tall and elegant, he was nicknamed Nyakech Oluoro Chuodho (The-Gazelle-Who-Loathes-The-Mud).

He was part of the Kapenguria 6 & in the first Cabinet as Minister for Information and Broadcasting. 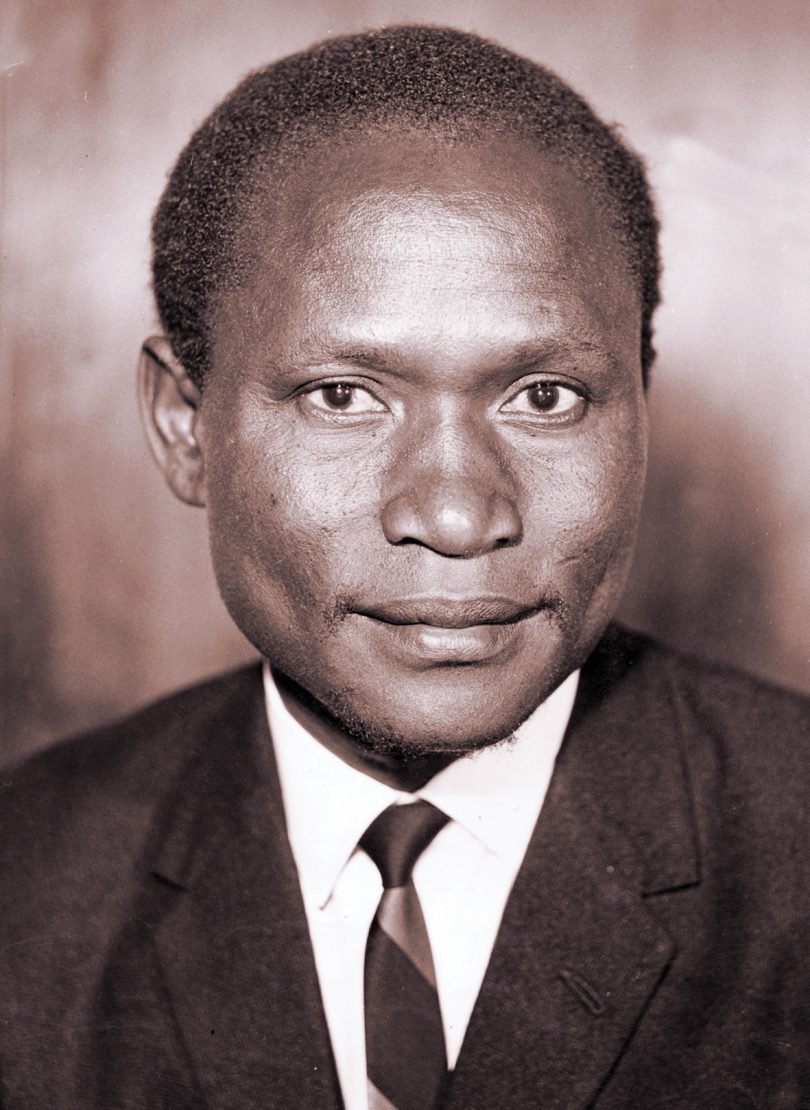 14/
Faith Wanjru Wachira, 90, one of countless women who fed and hid KLFA fighters now lives on a 50-by-100-feet plot in the populous Kakuret village in Kieni, Nyeri with her children, grandchildren and great-grandchildren. https://www.standardmedia.co.ke/article/2000226534/meet-mau-mau-fighters-who-have-never-tasted-fruits-of-independence
Meet Mau Mau fighters who have never tasted fruits of independence

“We used to seek casual labour on his farm and after he left, we were stranded, so we started farming, we liked the area since it was expansive and the soils were fertile,” she said.

https://www.standardmedia.co.ke/article/2000226534/meet-mau-mau-fighters-who-have-never-tasted-fruits-of-independence
15/
To date hundreds of landless villagers, many of them independence war heroes and heroines, are still ‘squatting’ at Kakuret where the white DO’s truck dumped them soon after independence.

They had been evicted from former settler lands in 1963.
16/
General Kubu Kubu (Njagi wa Ikutha) was a freedom fighter from Embu.

Kubu Kubu died in 1955, burned alive by the colonialists after he was betrayed by a local informant. 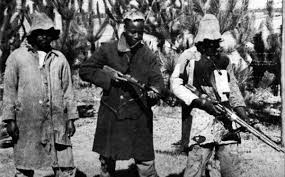 17/
Muthoni wa Kirima (born 1931), the highest ranking female in the KLFA, was one of 4 Field Marshals, including Kimathi, Baimungi Marete, & Mwariama 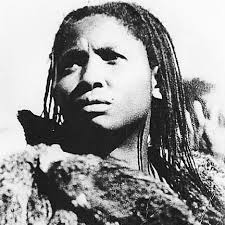 18/
Stanley Mathenge wa Mirugi (b. 1919) disappeared in Ethiopia in 1955 during an arms sourcing mission (or was murdered by Kimathi). He had fought in Burma in WWII and turned down a rank in the KLFA.

He was respected for his bravery and proficiency with the .303 rifle. 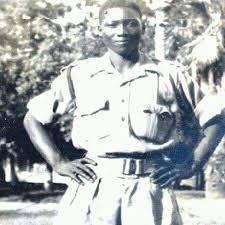 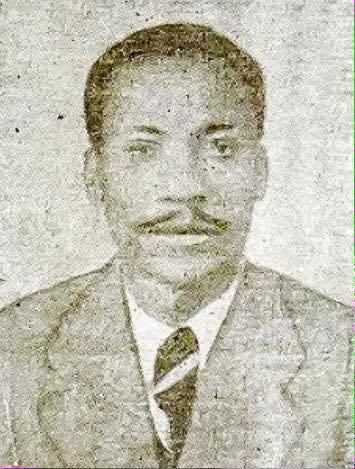 19/
In 2003, Kenyan journalist Joseph Karimi broke the story of Mathenge being found in Addis.

The Kibaki govt then flew Ethiopia farmer Lemma Ayanu into Kenya. He later confessed that he wasn't Mathenge & needed to get back for planting season.... 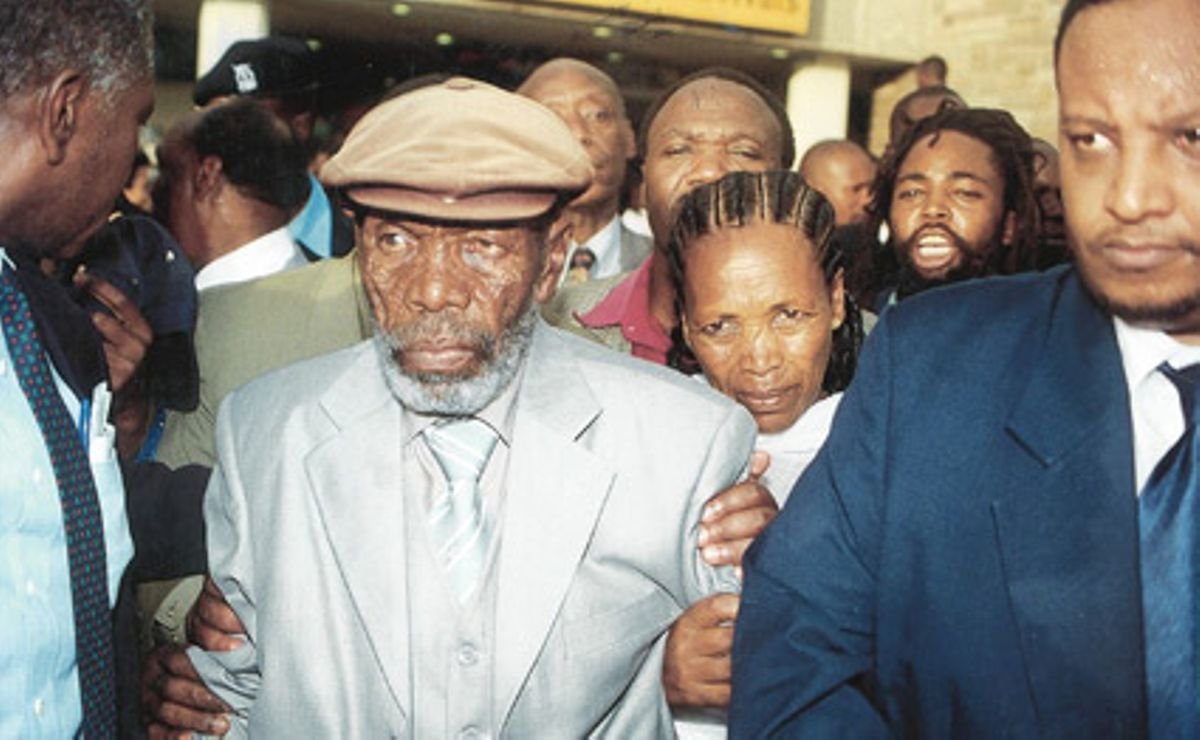 Baimungi was a soldier in WWII and learned how to make guns during the war, a skill that he applied to great effect in arming the KLFA 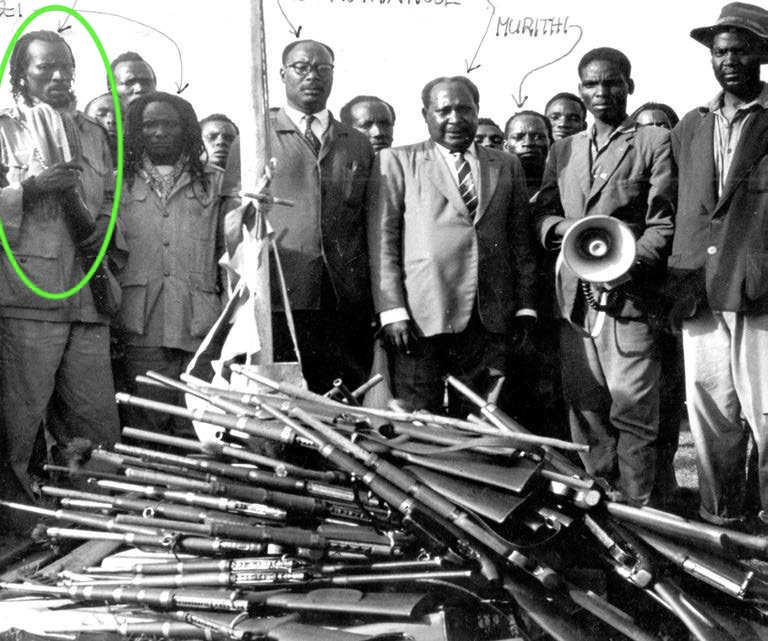 21/
After independence in 1963, Baimungi and his men left the forest and were received at Kinoru Stadium by Mbiyu Koinange and Jackson Angaine.

There were however some misgivings within the KLFA as the Kenyatta govt aimed to sideline the freedom fighters https://qz.com/africa/1802135/why-kenyas-mau-mau-gave-up-their-fight-for-jomo-kenyatta/
Why Kenya’s pre-independence rebel fighters Mau Mau gave up their fight

One question remains: why did the resilient Mau Mau freedom fighters fail to maintain revolutionary action after independence?

Baimungi gave Kenyatta a rhino whip and went to wait to be given land as promised by the President. 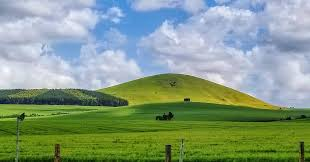 In January 1965, he was killed by government agents, their bodies displayed in public for 3 days, buried in a mass grave and the KLFA was proscribed and banned by the govt.

https://www.theelephant.info/features/2018/05/31/losing-my-religion-the-cross-the-lynching-tree-and-kenyas-post-colonial-enterprise/?print=pdf
24/
Baimungi's family says that efforts by their late mother Evangeline Muthoni, who died in 2014, to reach the late Kenyatta and Moi, proved futile. In May 2005, she was arrested when she tried to gain access into Parliament to air her grievances. 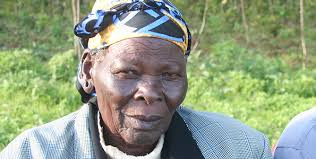 25/
Bildad Mwaganu Kaggia (1921 – 2005) was a leading leftist of the colonial period; probably the strategic planner on Mau Mau's central committee; notably anti-racist; and uncompromisingly committed to the poor.

After independence he fought for the rights of the landless. 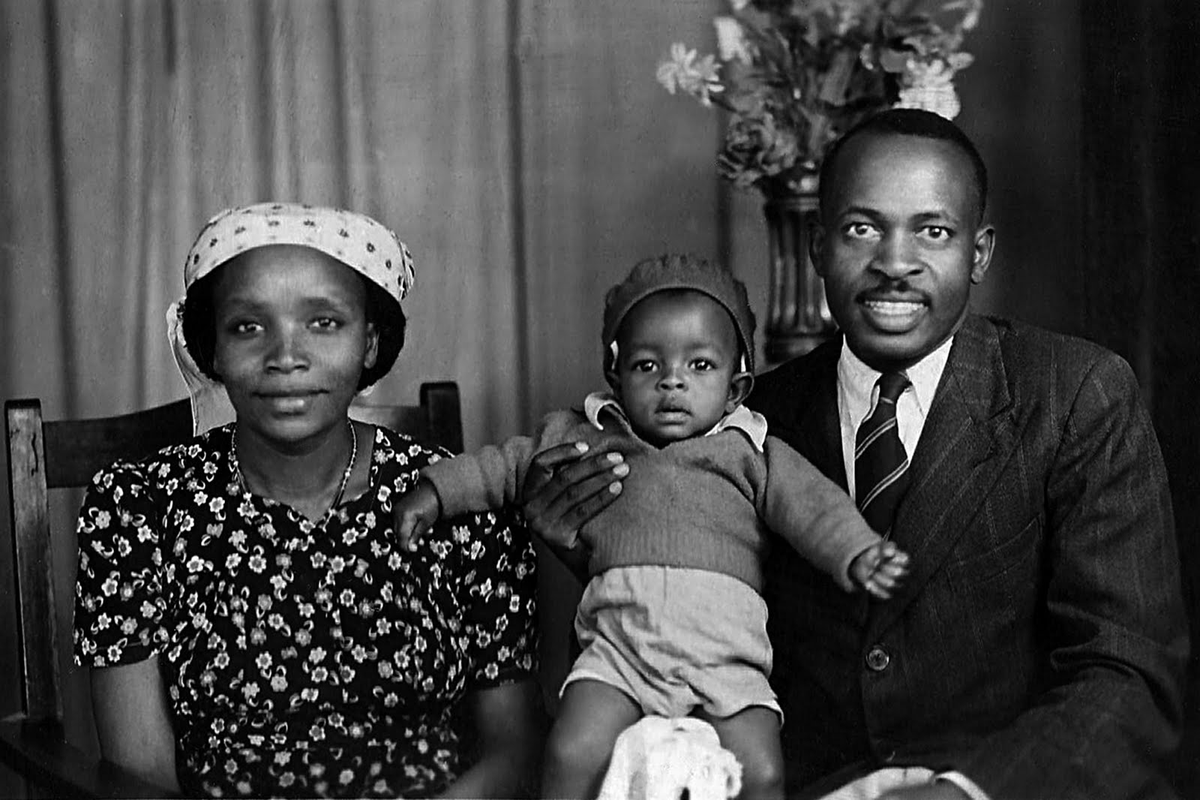 "The way things are in Kenya... we got independence because Kenyatta colluded with the colonial government. He suppressed us, all those who were with him, and I'm the only one who is still alive. He tried to kill me on seven different occasions." 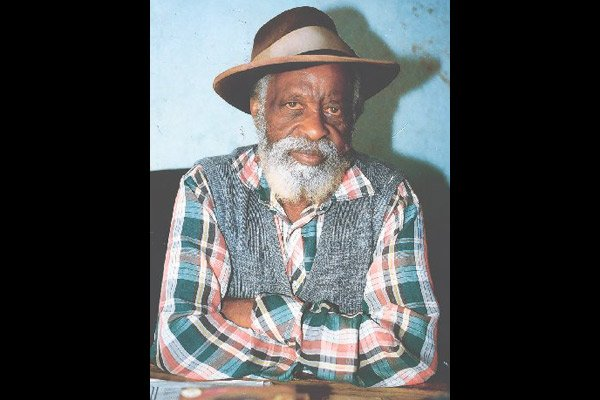 27/
Finally, KLFA probably had between 50 to 100 generals including: 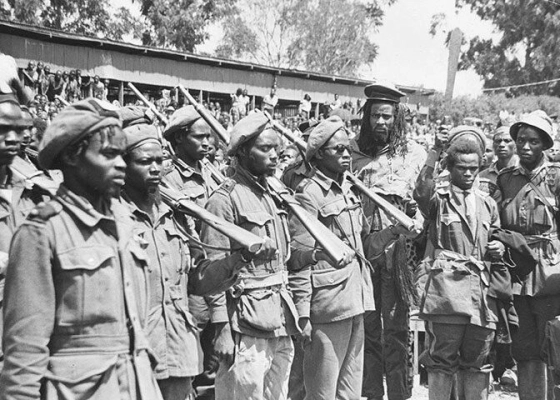