Read on Twitter
I’m outside the White House with @kadiagoba, covering tonight’s protests in Washington, DC for @BuzzFeedNews: 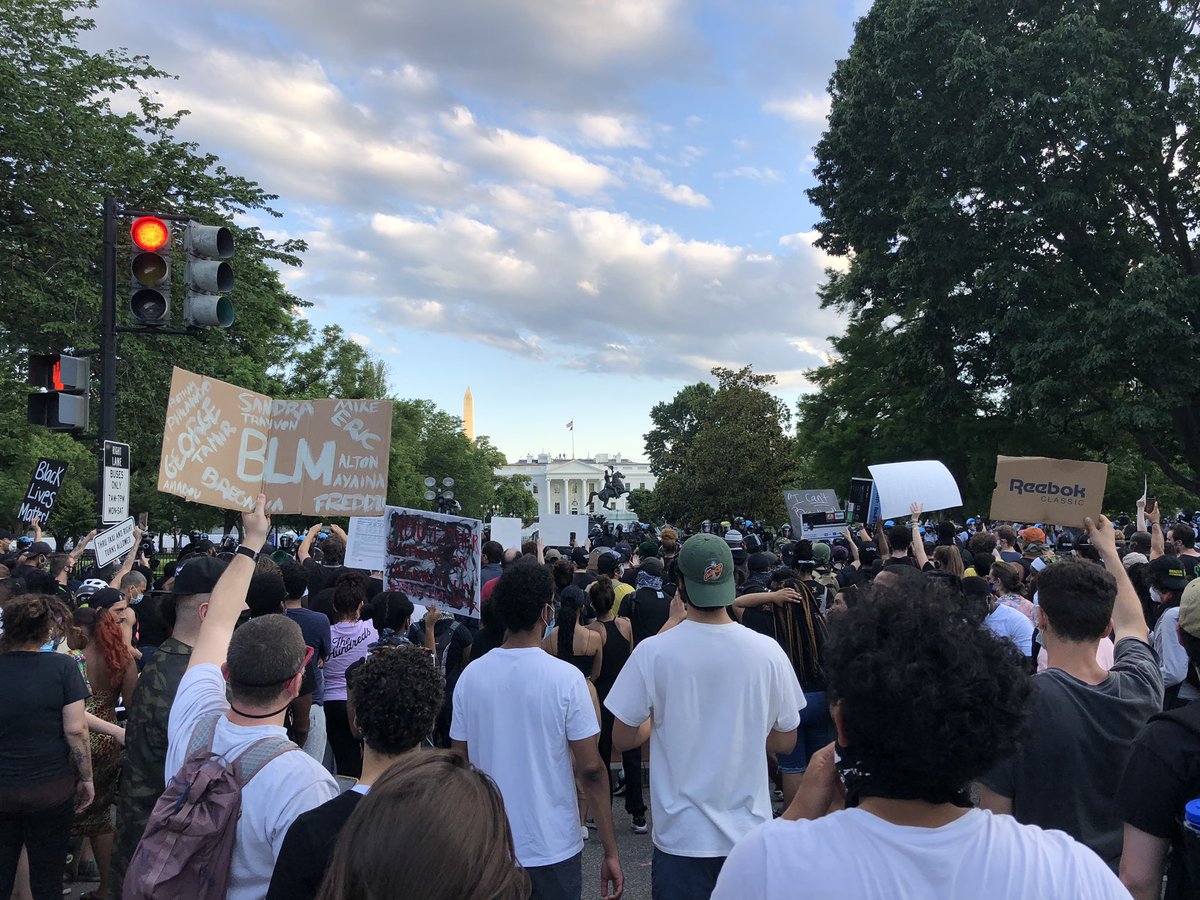 Police / Secret Service have closed off Lafayette Square Park (park in front of White House) and 16th street (which leads to it). Huge law enforcement presence: 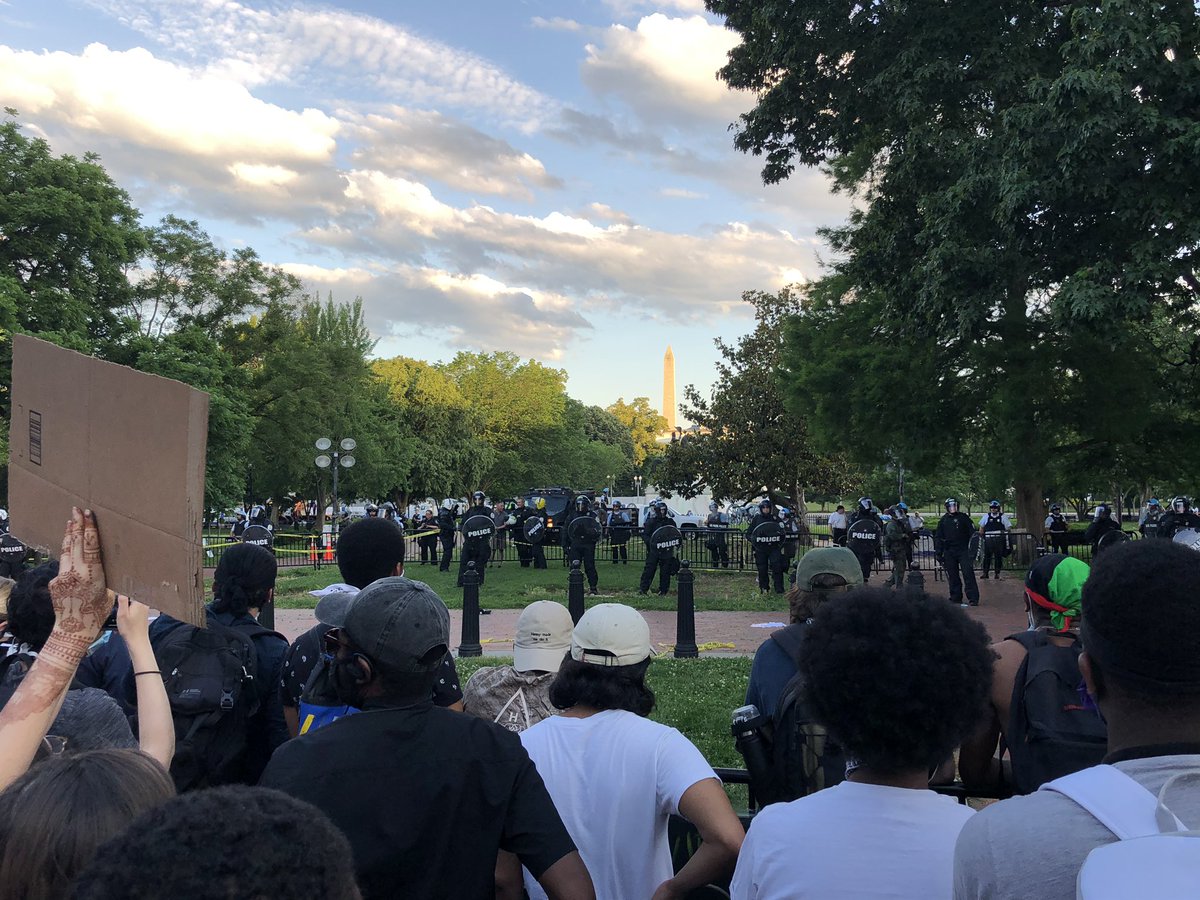 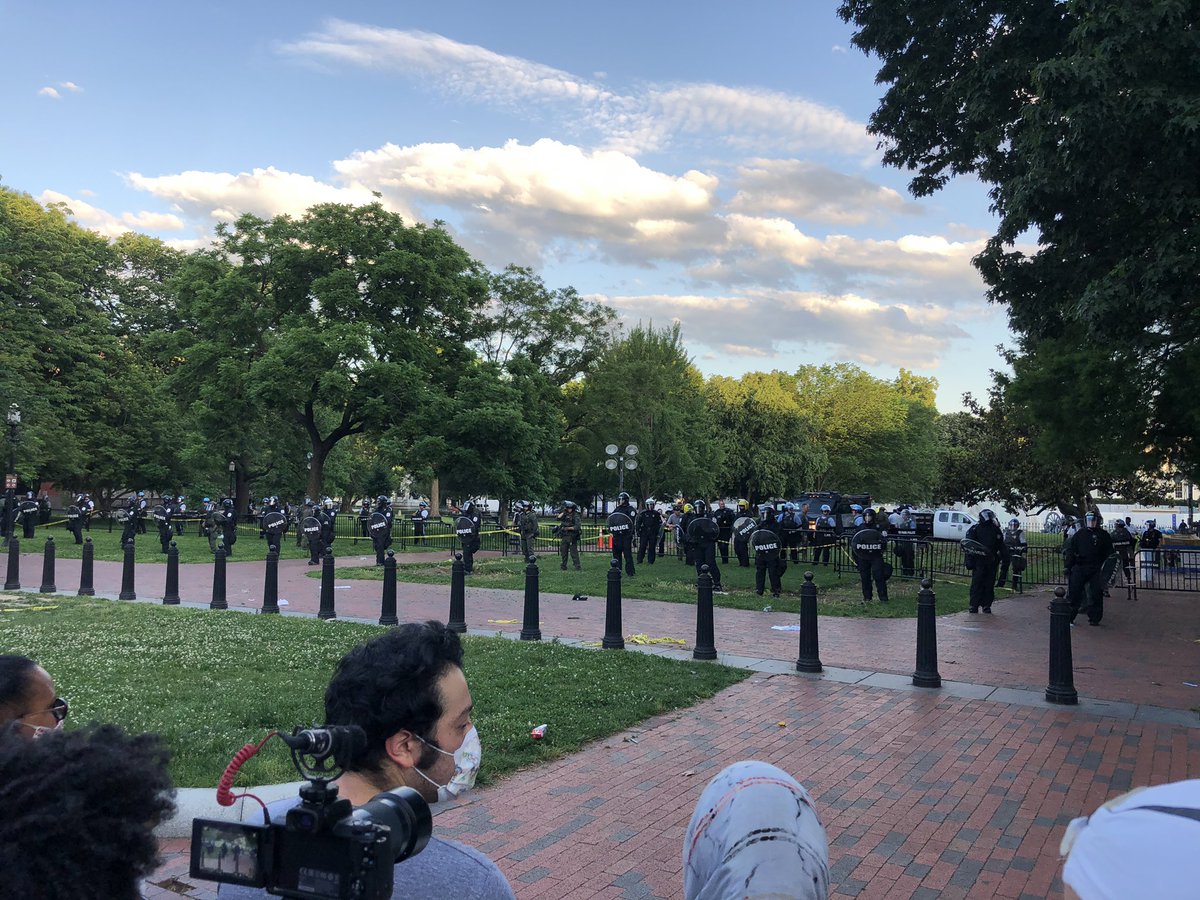 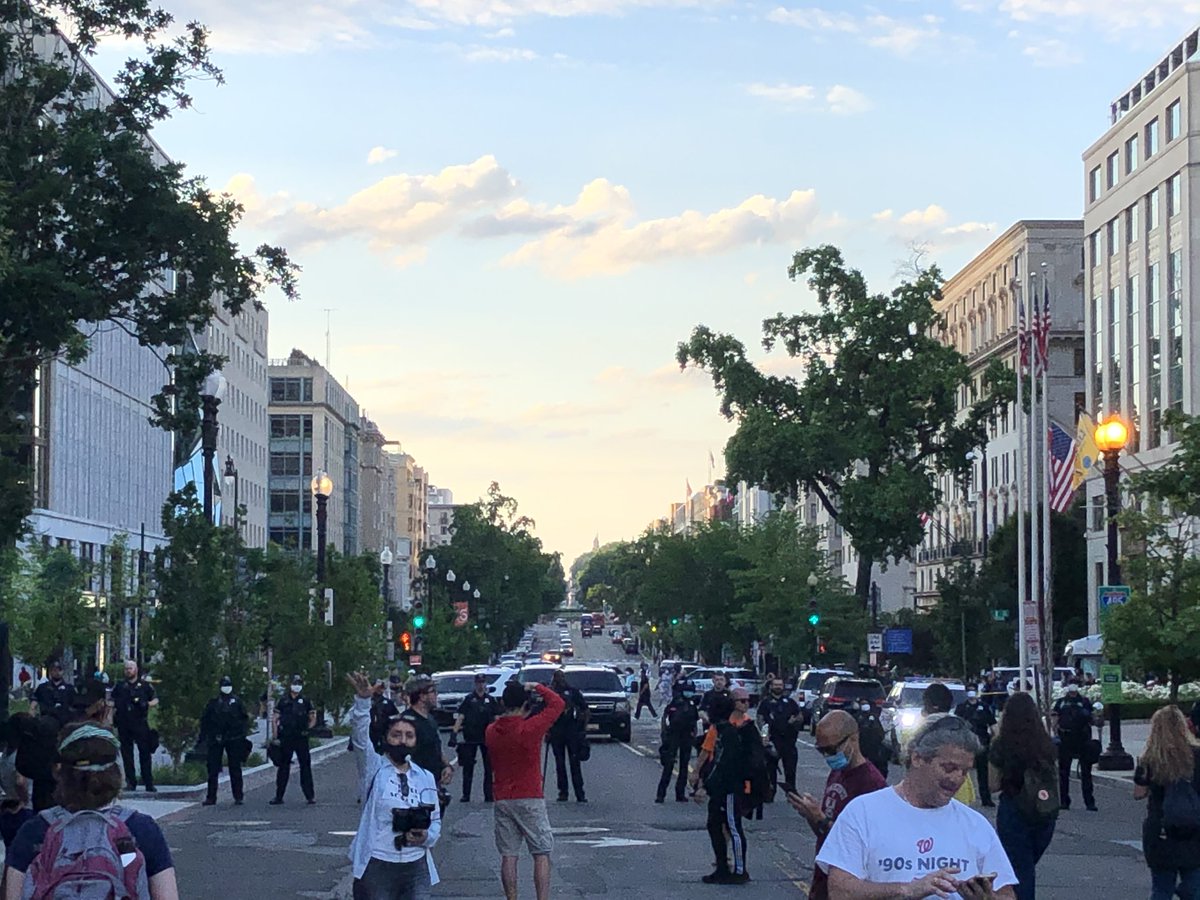 A few minutes ago, protesters tore down one of the fences around Lafayette Square Park and tear gas was deployed.

Police have moved up closer to the protesters now. #dcprotests #georgefloydprotests 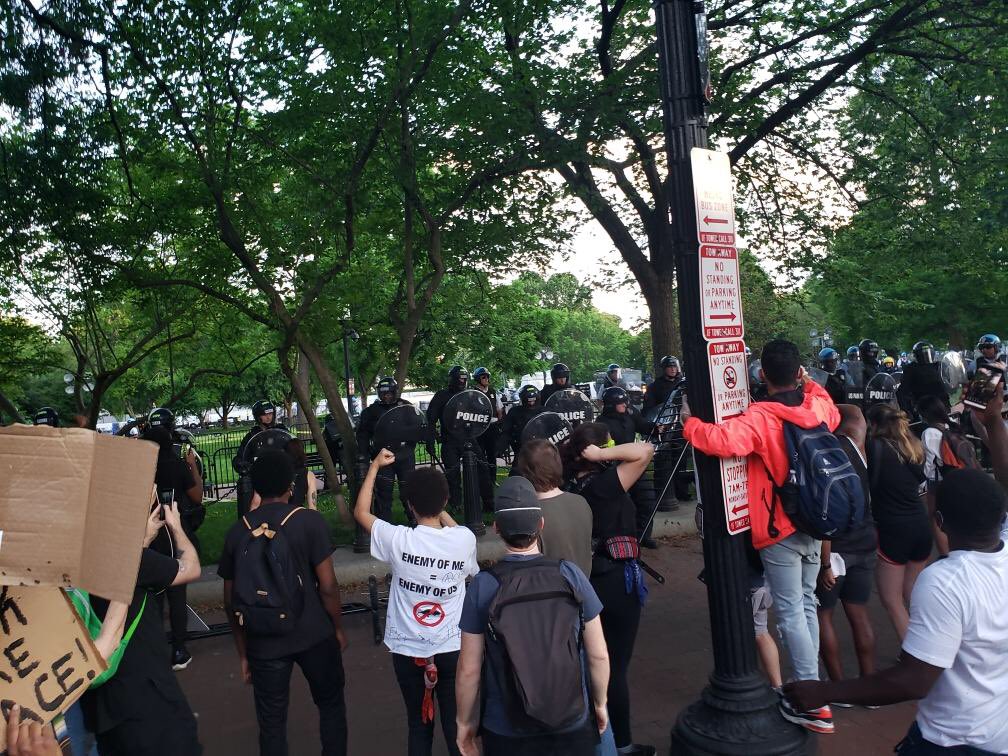 Trump’s motorcade is headed back to the White House and police presence has increased DRAMATICALLY.
(To be clear, this is just the motorcade with the press pool, etc. Pretty sure he’ll be taking Marine One)
A group of protesters just tried to get into Lafayette Square Park. Tear gas was deployed again.
Trump, in Marine One, just did a flyover of the protest area outside the White House.

Protesters flipped off the president’s helicopter. 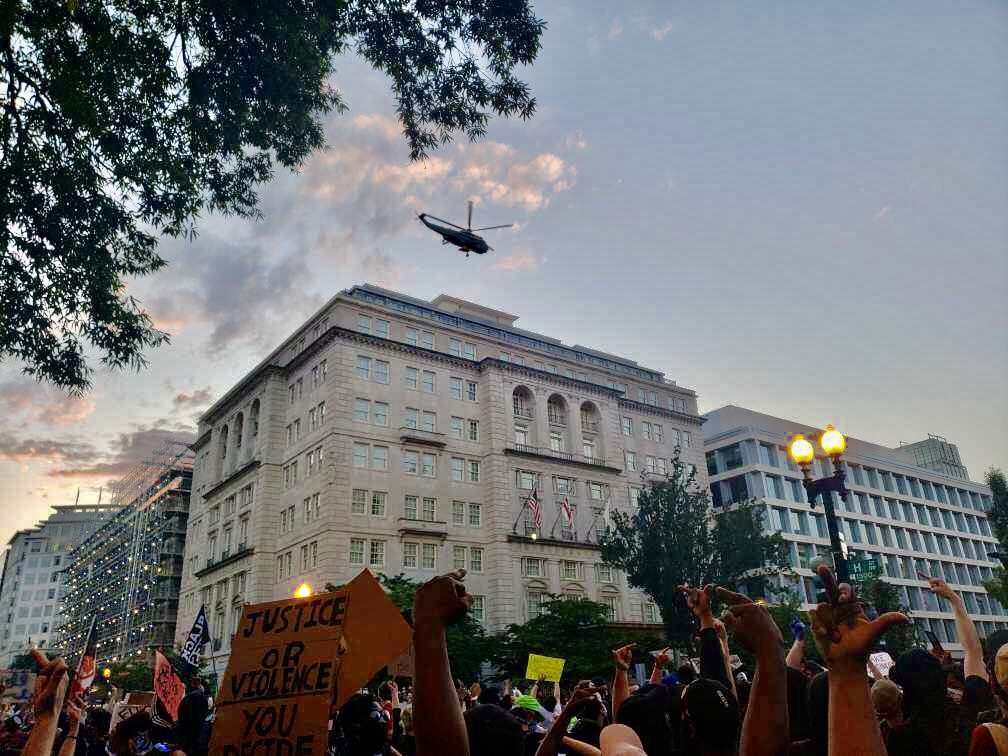 A big group of protesters just showed up to join the protesters that are already here in front of the White House. I’d guess about 100-150 more people?
(In other news, your faithful @BuzzFeedNews correspondents @kadiagoba and myself have decided it is now respirator o’clock.)
I’d estimate there’s 1,000+ people protesting outside the White House and in the surrounding streets right now. 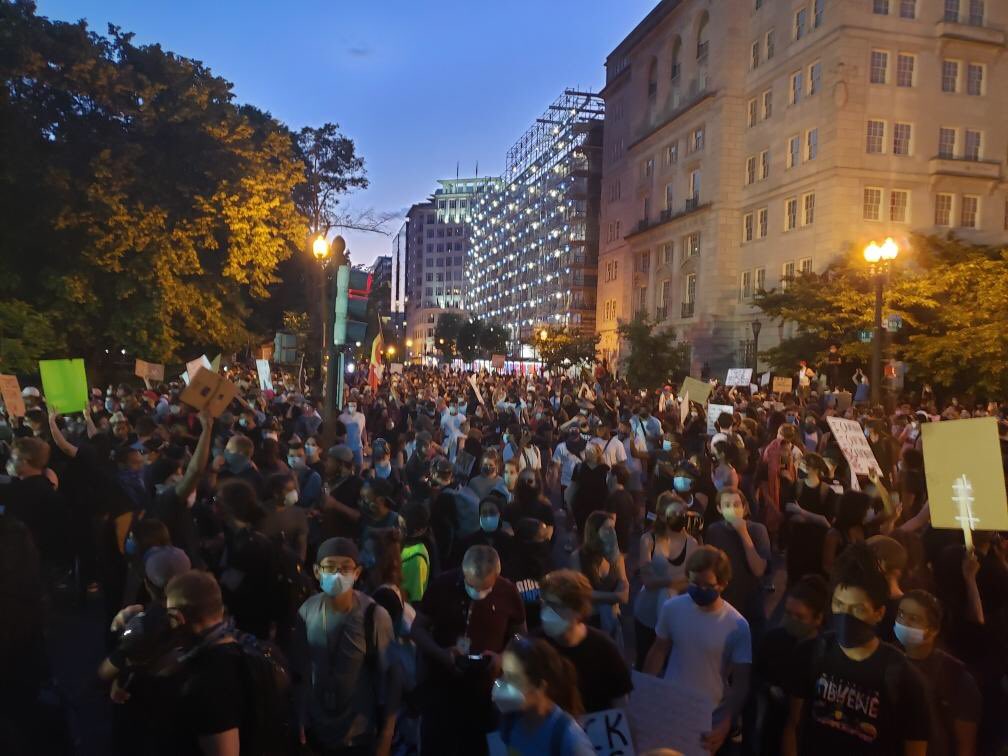 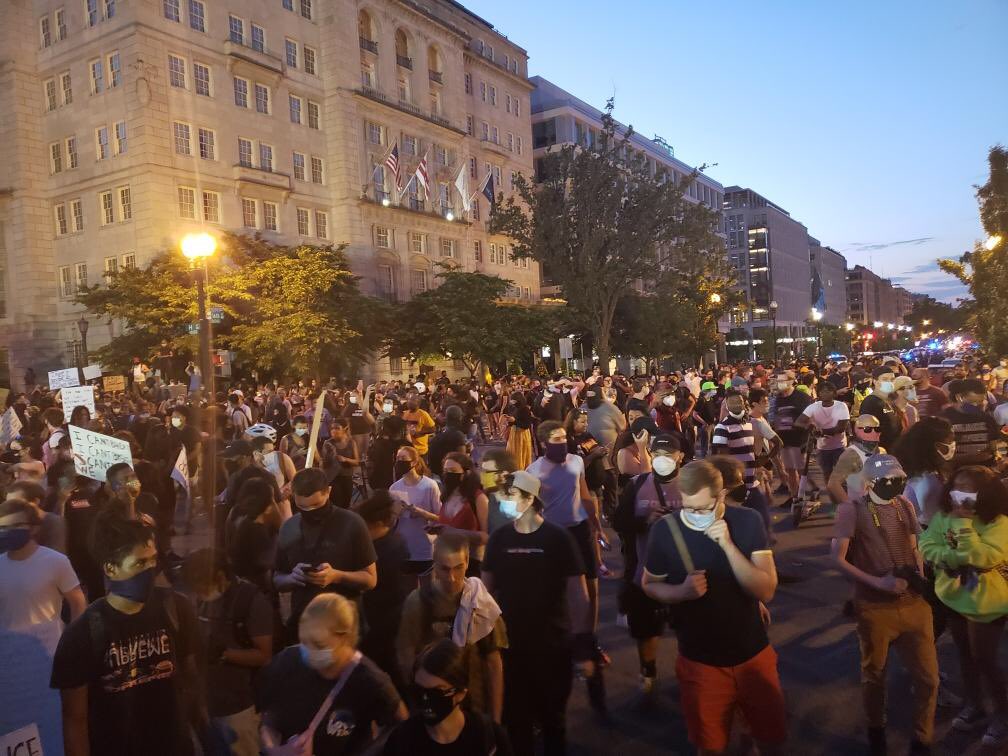 Police have moved right up to the barricades. Some people in the crowd throwing things (mostly water bottles) at the cops. #dcprotest 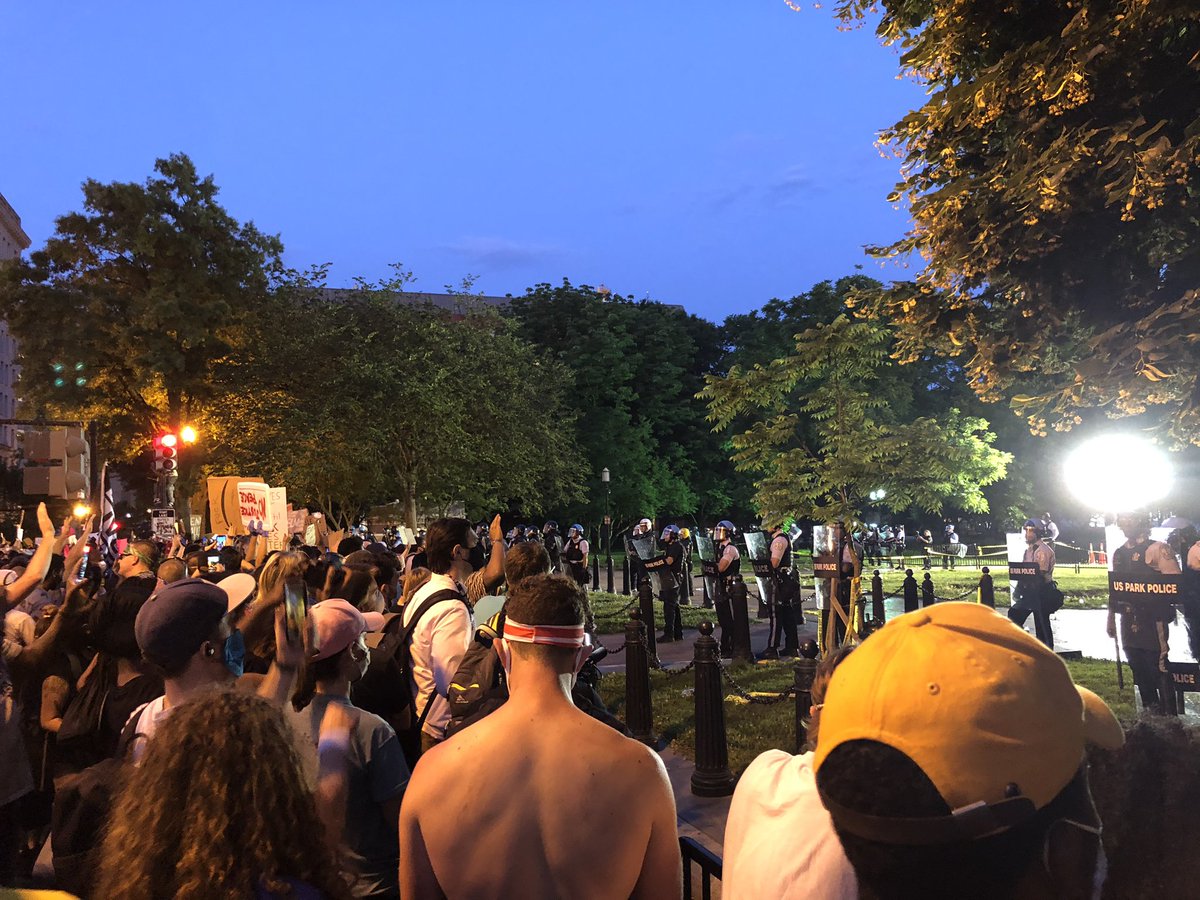 To be clear: there are a bunch of different law enforcement agencies out here in front of the White House.

#DCProtests
Getting real tense here in front of the White House.

People charged the barricade and grabbed it / tore it down. Cops fired a round of rubber bullets and deployed tear gas at protesters attempting to get past the fence. #dcprotests 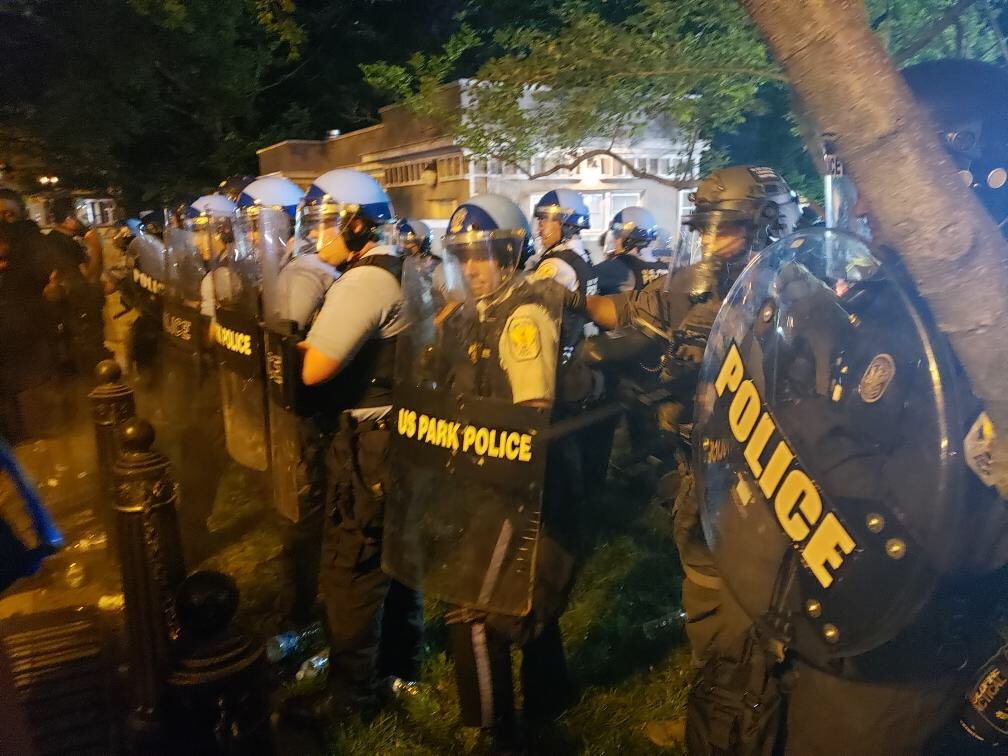 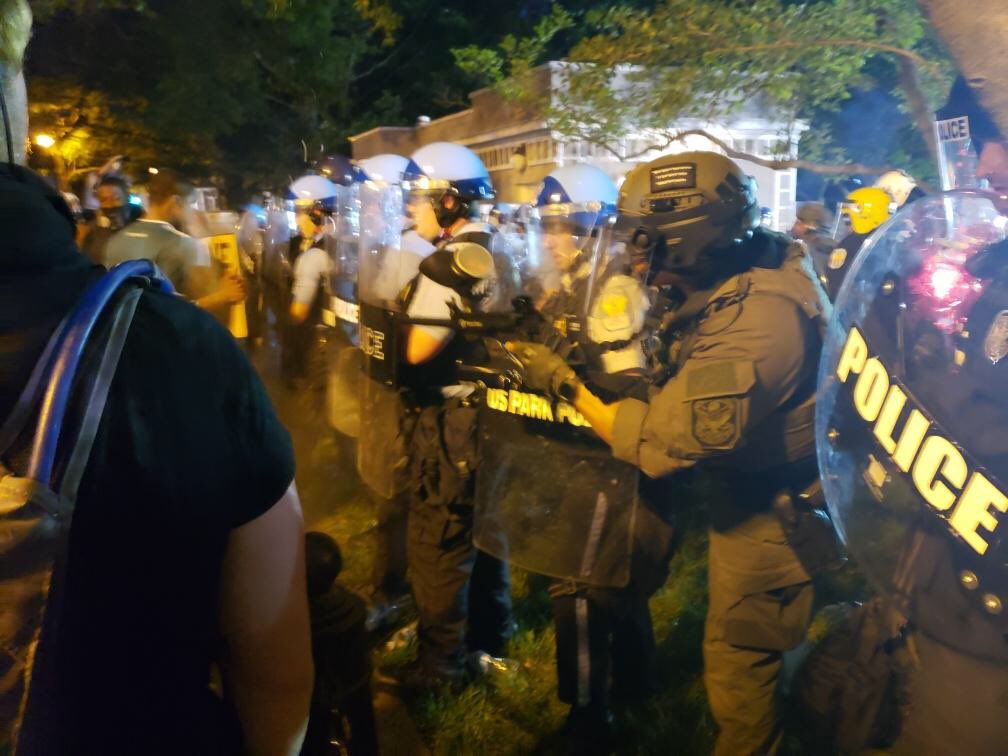 Escalation between protesters and police at the White House. A protester picked up a tear gas canister and threw it back at police.

Cops responded with lots and lots and lots of tear gas. Lots of people hit — to be clear, lots of people who were peacefully protesting.
A very small minority (like 5% of the people here) at the #dcprotest are throwing things at the police. I’ve seen firecrackers, water bottles, and bricks.

People who aren’t police are getting hurt.

Josie Williams, 19, of DC got hit in the back of the head by a brick. 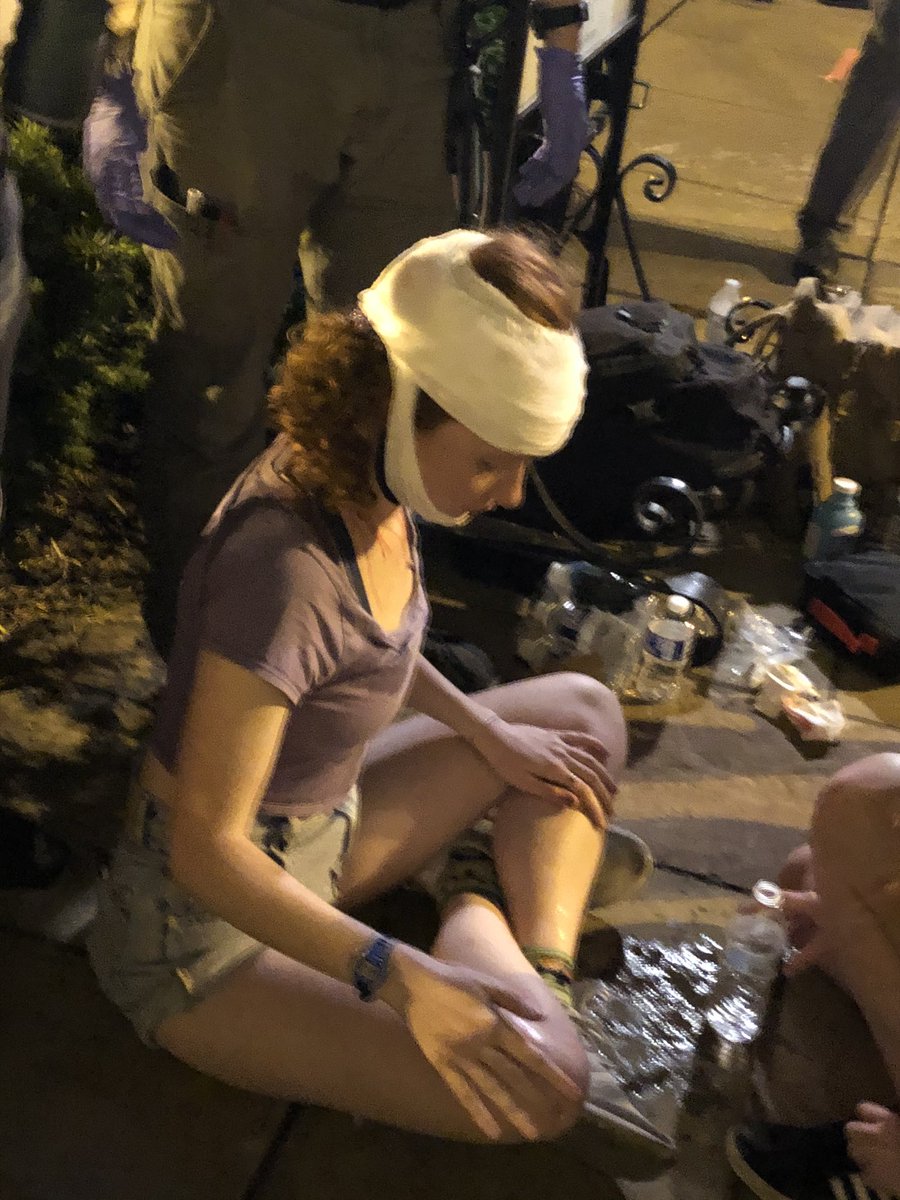 (There are a bunch of volunteer street medics out here to help people who have been injured.)
DC National Guard have joined the law enforcement line in front the White House. 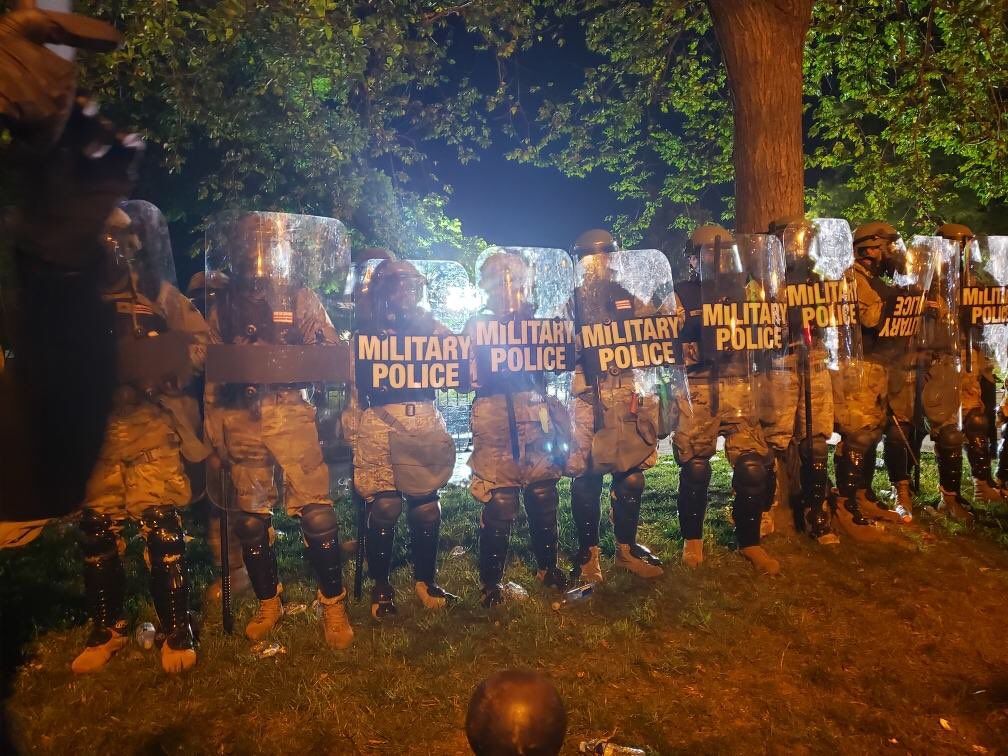 Cops are now spraying protesters with pepper spray. #dcprotests #GeorgeFloydProtests
To be clear. As I said above. About 5% of the people here are removing barriers and throwing stuff at police.

Everybody else is hanging back and chanting with signs and trying to avoid being injured.

#dcprotest
In the past few minutes there have been two loud/powerful firecrackers thrown at police in front of the White House. 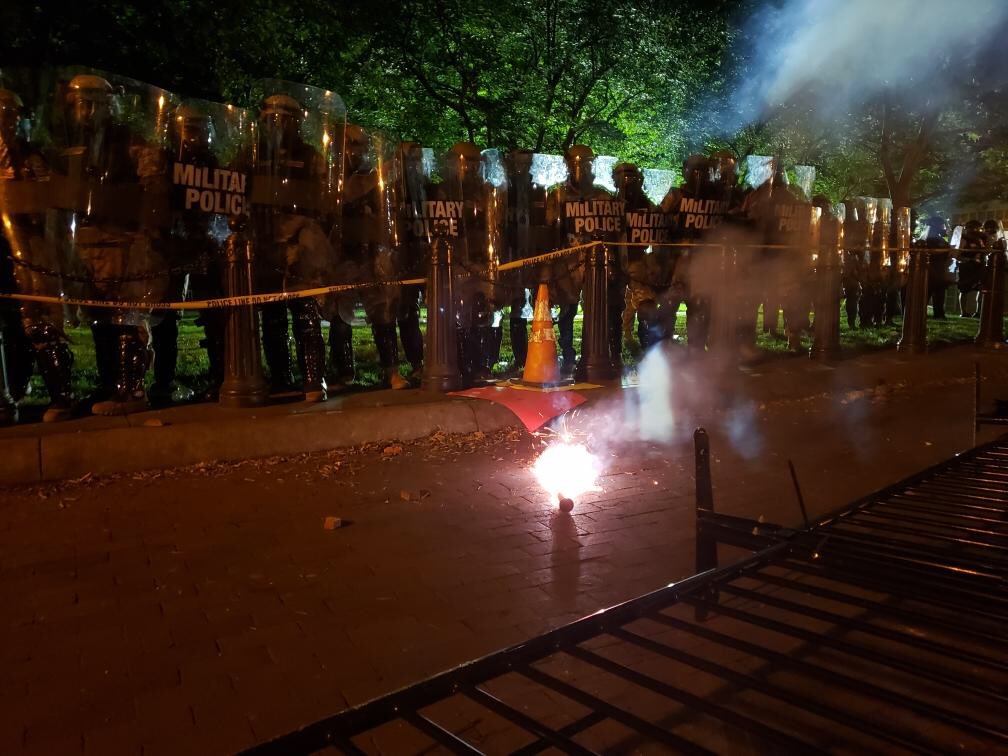 Huge round of tear gas fired on crowd after a police officer was hit in the head with a brick.

(I would no longer classify this as a peaceful protest, to be clear.)

Your faithful @BuzzFeedNews correspondents have retreated from what I would now classify as a riot.
Rioters just lit a car on fire a block away from Lafayette Square Park: 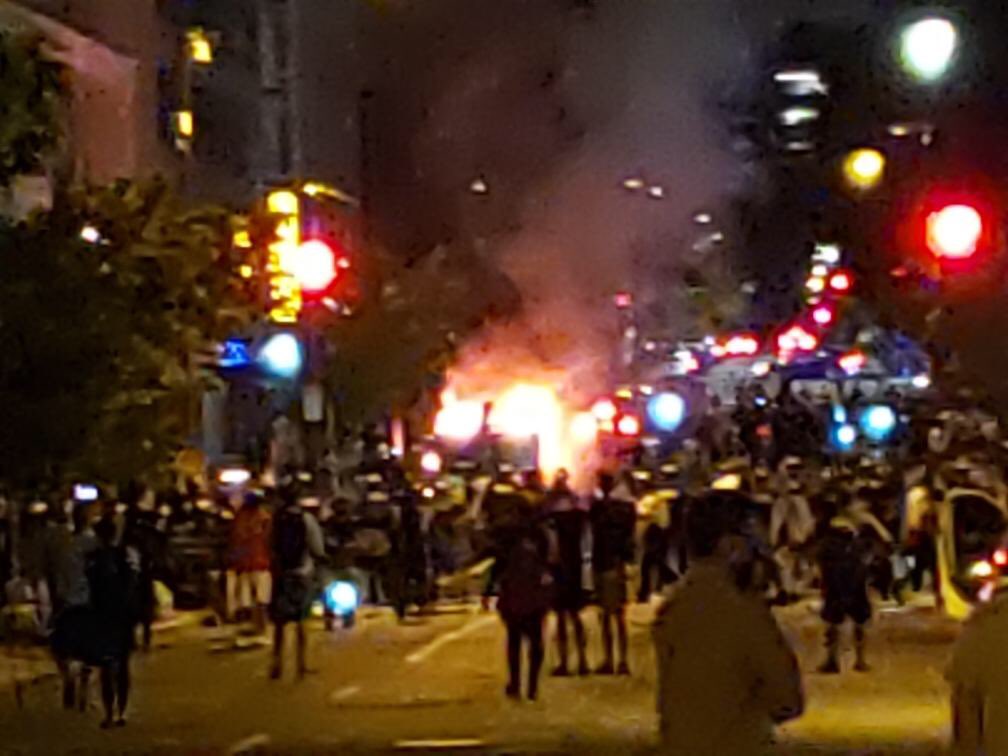 I have covered a lot of protests and riots and this is dangerous. If you are at the #dcprotest #DCProtests, and following my tweets, get someplace safe now. Retreat.

This is escalating and people have been hurt and will get hurt.
One of the last things I saw before retreating.

Riot police were blocking off the roads around Lafayette Square Park and funneling people back to that area.

Batons in use, not just shields. Vehicle on fire further down the street. #dcprotest
~ Before I keep going with pictures and reporting notes:

Thank you to everybody who's reached out to make sure that @kadiagoba and I are safe. We are.

We're both home, as is my military veteran fraternal unit, who decided to come with for added safety in numbers reasons. ~
Now that I'm home / I've been able to charge my phone and look through my replies, I feel like I should clarify some things.

Re: bricks. I have no idea where the bricks came from! I just saw them flying through the air and injuring people.
Same with the fireworks!

When you're in a crowd of 1k+, you can't always see who's doing the throwing, but you can see the explosion and then have to scramble to safety when everybody who's closer to the firework starts running away.
Also, I cannot emphasize enough how much tear gas was deployed at this #dcprotest today.

I’ve covered protests/riots (protriots? is there a word for one that turns into the other?) in DC for 4+ years now and I have never needed my respirator for extended reporting here before. 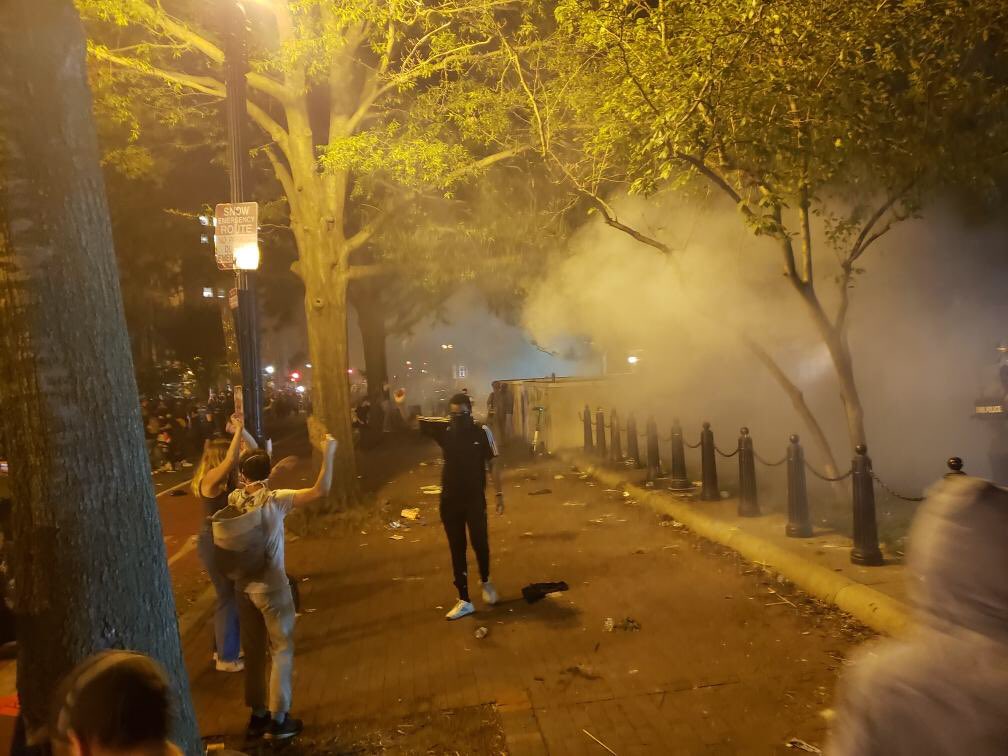 Another observation: There was so much fire tonight. More than I’ve seen before — and this includes when I was out in the field on Trump’s inauguration.

Flags. A dumpster. A SUV. Scaffolding (near the Hay Adams Hotel). 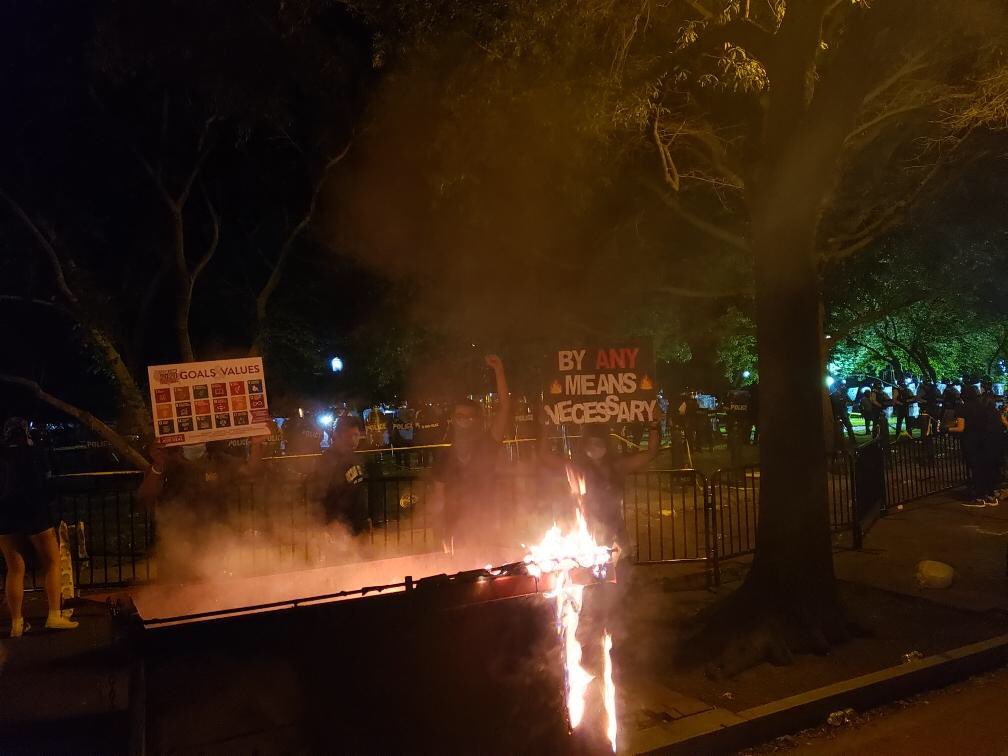 I’m going to sign off now because it’s nearly 3am and it’s been a long night.

Thank you for following my reporting and the reporting of my colleagues @BuzzFeedNews who have been covering other protests across the country.
You can follow @ellievhall.
Tip: mention @twtextapp on a Twitter thread with the keyword “unroll” to get a link to it.