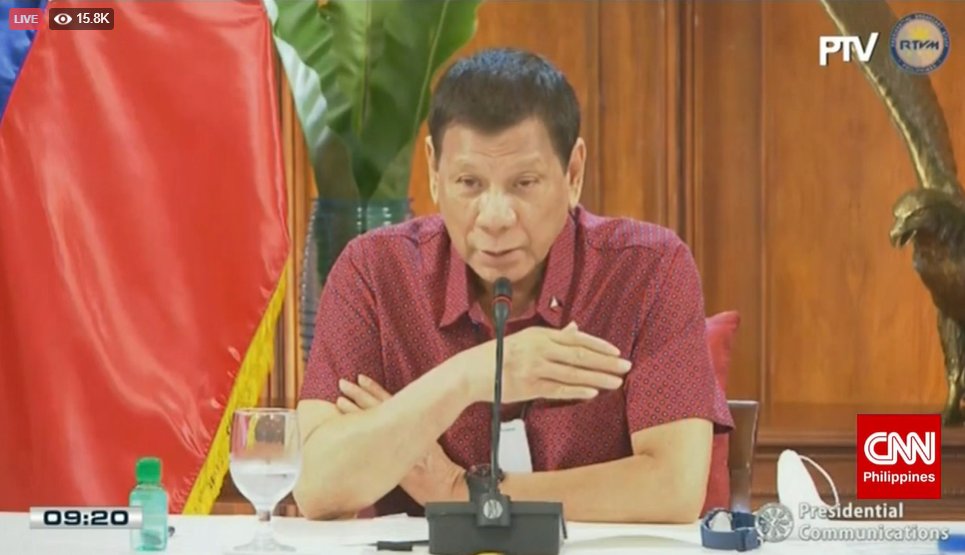 Duterte: Lahat ng ito po ay ginagawa namin, believe me, because the interest of the nation calls for it, demands for it actually.
Duterte: I have to be productive as President. In order to do that, I have to go around... seeing to it that the republic is well guarded and the welfare of the people is the highest concern.
Duterte: Itong Land Bank bubuksan namin and you can borrow money to finance the education of your children.
Duterte: We are hard pressed in our finances but we need to place a premium in your education.
Duterte on GCQ transition: We are not happy to put you in this place. But after review, maybe we can.
Duterte says Davao City will also remain under GCQ.
Duterte says Regions 2, 3, and 4-A, and provinces of Pangasinan and Albay will also be under general community quarantine starting June 1.
Duterte: The rest of the country will be placed under modified general community quarantine.
Duterte: In other areas, it will be again a piece meal basis depending on the viability of the place to meet the challenges of the COVID.
Duterte on the plight of stranded OFWs in Metro Manila: We are coordinating every government agency to help them. Sana hindi na ito maulit.
Duterte: When you collect somebody who's not earning at all, it's practically flagging a dead horse.
Duterte reminds store owners and landlords to waive rent fees for the meantime.
Duterte: Let me appeal to the landlords, malls, bazaars, big stores na merong mga different stores... Marami dito sa kanila po ang gusto ninyo na magbayad ng 50% even if they are not operating. (1/2)
Duterte: You know, when you collect from somebody who is not earning at all, it's practically flogging a dead horse. (2/2)
Duterte: I would like to appeal to the owners of the buildings and malls, just pray that the vaccine, ang target nila is September. I think China will be able to distribute, if I'm not mistaken.
Duterte: I think [China] will be one of the countries to be able to come up with vaccines.
Duterte on vaccine development: September, China will distribute if I'm not mistaken. Everybody is at it. They're really trying their very best.
Duterte: Ako naman nakikiusap, talagang they are not earning, so what will they use to pay? Maawa naman kayo sa mga kababayan natin. Let us help one another.
Duterte: The entire nation is still under quarantine. Let us move to a so-called new normal.
Duterte: The COVID microbes are still in the air that you can breathe and you may pass to your fellow countrymen when you do not wear a mask.
Duterte appeals to public to continue wearing masks in public.
Duterte: To prevent a mass contagion, gusto namin putulin kung saan namin maputol to stop it. That is the reason of the essence of the police power of the state — to come up with measures to protect public interest, public health, public safety.
Duterte: The state has the right to come in and put a stop on it.
Duterte: This is a country of Filipinos who obey the law. If you do not obey the law... bahala ka. Good kung makasibat ka. Kung hindi ka makasibat, e pasensya ka.
Education Secretary Leonor Briones: The first and foremost concern is the health and safety of our learners and teachers.
DepEd chief: There will be no face-to-face classes and sessions until we are assured of the safety of our learners and teachers.
DepEd chief points out that there will be a blended distant learning scheme in the upcoming school year.
DepEd chief: For those who don't have interactive facilities, printed materials will be delivered to the students.
DepEd chief says there are around seven million subscribers in the DepEd Commons online educational platform.
DepEd chief: In cases where there is no connectivity and printed materials may not be available immediately, we have the classic long-time approaches which have always been used in education. This would be television.
DepEd chief says online distance learning is already gaining popularity.
DepEd chief: On the matter of online distance learning, with already 7 million subscribers, we assume here that they have access to the internet.
DepEd chief: 15 percent of television time, as provided by law, should be dedicated to programs designed for children.
DepEd chief reiterates that students can learn through television for those who struggle with online connectivity.
DepEd chief: Radio-based instruction is quite popular because right now municipalities are volunteering.
DepEd chief: The regions are different from each other, some have islands and mountains and some have interconnectivity. What they are doing is translating the curriculum into television programs.
DepEd chief: Iba yung effect ng television programs because they can be easily distracted.
DepEd chief adds that they also translate the curriculum to radio scripts.
DepEd chief: So what regions are now doing is to translate the curriculum, it has to be translated one into digital codes for our platforms natin, into television programs.
DepEd chief: We fully and completely support your stand that our children should not be exposed to the dangers of COVID-19 physically but they are also offering opportunities to continue their studies.
DepEd chief points out that many universities are doing distant learning.
DepEd chief: What we are trying to do is not really new. Hindi naman ito bagong imbento.
DepEd chief: Many universities have distance programs. Many local government units have radio stations. They are utilizing existing ways of communication without necessarily requiring the children to go to school.
DepEd chief: We seek your (President's) approval on alternative methods of learning which are already being done now

Duterte: All that you have said is really feasible, radio, television and all of these things. I believe you have a workable program and I support you.
Duterte: Kung wala na tayong pera, ilaan nalang natin sa edukasyon ng mga bata.
Duterte: We have to forego many things along the way because of what happened. But education, I think, if it is compromise, it should be negligible so that it should go on.
Duterte: The future of this country depends on how we educate these people.
Duterte: As of today, we have a total number of COVID cases of 15,588. Now, the recoveries, 92 new ones with a total of 3,598. Ang patay is 921 so you would see Philippines' ratio and proportion vis-a-vis with populaiton we have a low rate of mortality here.
RELATED: http://bit.ly/36Nw4PT
PH records highest single-day COVID-19 surge with 539 new cases

The country reports its highest ever single-day increase in coronavirus cases with 539 new infections, breaking the previous record high of 538 on March 31.