Welcome! SpaceX is just under 4 hrs away from launching astronauts to the ISS. It’s the first time astronauts have launched from US soil since the Shuttle era, and SpaceX will be the first private company to send astronauts to space. https://www.theverge.com/2020/5/27/21270336/spacex-crew-dragon-launch-watch-live-stream-nasa-how-to
How to watch the SpaceX Crew Dragon mission

https://www.theverge.com/2020/5/27/21270336/spacex-crew-dragon-launch-watch-live-stream-nasa-how-to
Here’s @lorengrush on the basics of the launch — what it means, what it will look like, etc: https://www.theverge.com/2020/5/26/21266277/spacex-nasa-commercial-crew-dragon-demo-2-launch-human-mission
Here’s what to expect as SpaceX launches its first human crew to space

What you need to know about the first orbital launch from the US in a decade.

https://www.theverge.com/2020/5/26/21266277/spacex-nasa-commercial-crew-dragon-demo-2-launch-human-mission
Here’s @NicoleWetsman on how NASA and SpaceX are pulling this off *during a pandemic* https://www.theverge.com/2020/5/25/21264868/spacex-nasa-launch-pandemic-covid-crew-dragon-astronaut
How SpaceX and NASA are launching astronauts into space during a pandemic

Kennedy Space Center is closed to the public for the launch

https://www.theverge.com/2020/5/25/21264868/spacex-nasa-launch-pandemic-covid-crew-dragon-astronaut
Here’s @lorengrush again on What It All Means, and why this mission is so important to the future of human spaceflight in this country and beyond: https://www.theverge.com/21255700/spacex-crew-dragon-mission-launch-nasa-commercial-space-travel-tourism
How the SpaceX Crew Dragon mission could shape the future of commercial space

The first crewed launch of the Commercial Crew Program is the final test.

https://www.theverge.com/21255700/spacex-crew-dragon-mission-launch-nasa-commercial-space-travel-tourism
Here’s @lorengrush *again* (sensing a theme?) on the two men who will be riding to space on SpaceX’s rocket https://www.theverge.com/2020/5/20/21254315/spacex-crew-dragon-astronauts-behnken-hurley-nasa-launch-dm-2
Meet the first NASA astronauts SpaceX will launch to orbit

Bob Behnken and Doug Hurley are about to make history.

https://www.theverge.com/2020/5/20/21254315/spacex-crew-dragon-astronauts-behnken-hurley-nasa-launch-dm-2
All the rest of The Verge’s coverage of the mission can be found here. Weather is still iffy but NASA and SpaceX are moving forward as planned for now. Buckle up! https://www.theverge.com/2020/5/26/21270248/spacex-nasa-crew-dragon-launch-commercial-updates-astronauts
SpaceX’s first crewed launch: all the updates on the company’s historic mission for NASA

The company has had quite a journey to get to this point.

https://www.theverge.com/2020/5/26/21270248/spacex-nasa-crew-dragon-launch-commercial-updates-astronauts
Just a few moments ago — the astronauts are suited up for the flight, and briefly met with Elon Musk and NASA administrator Jim Bridenstine: 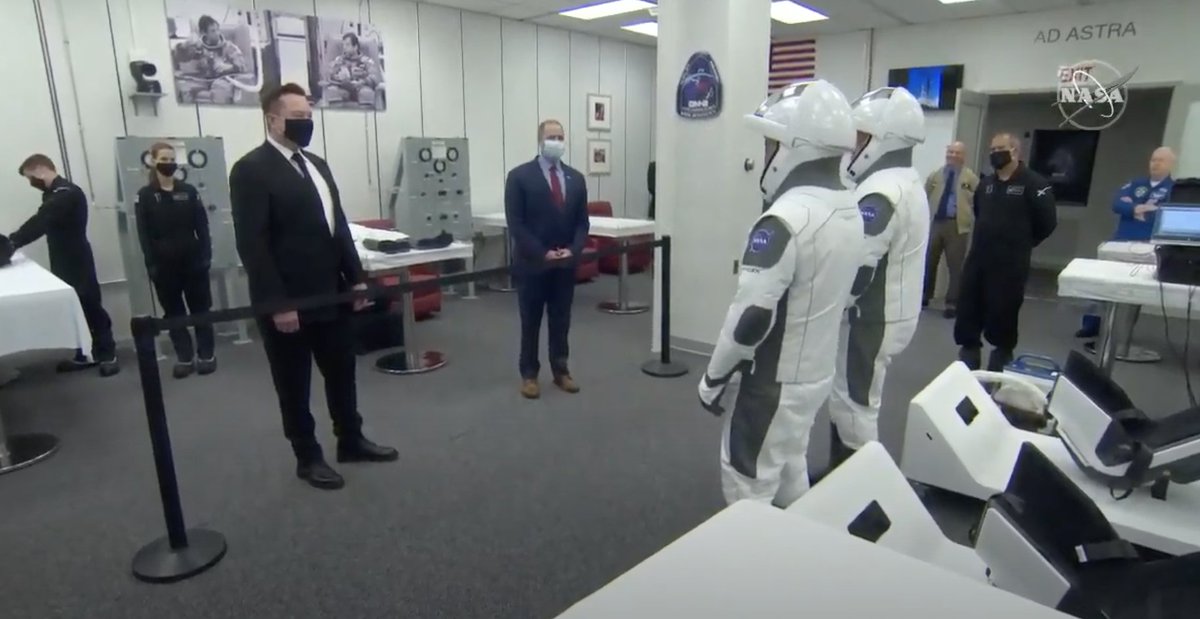 VP Mike Pence has joined Elon Musk and NASA administrator Bridenstine. Kelly Clarkson is now singing the national anthem as the astronauts head to the tower. 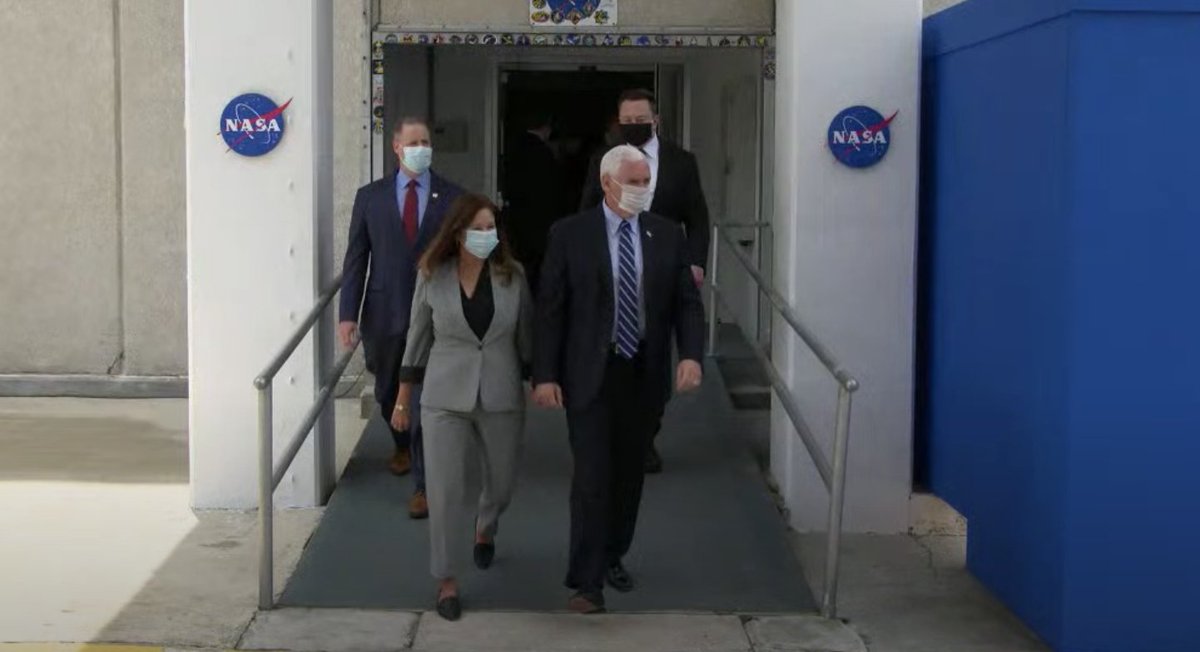 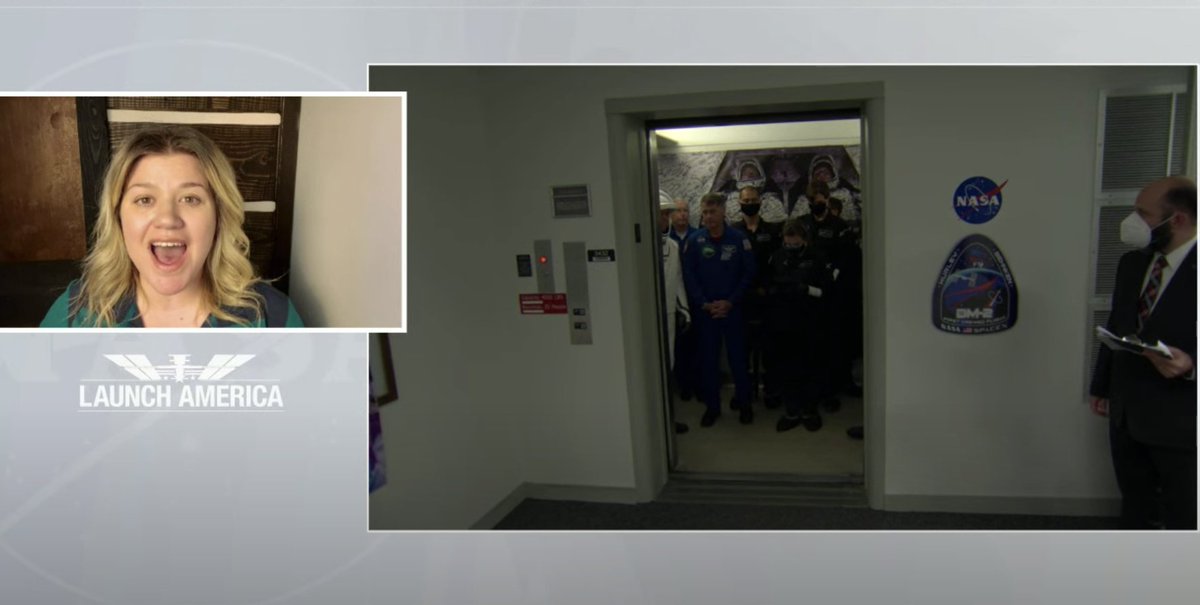 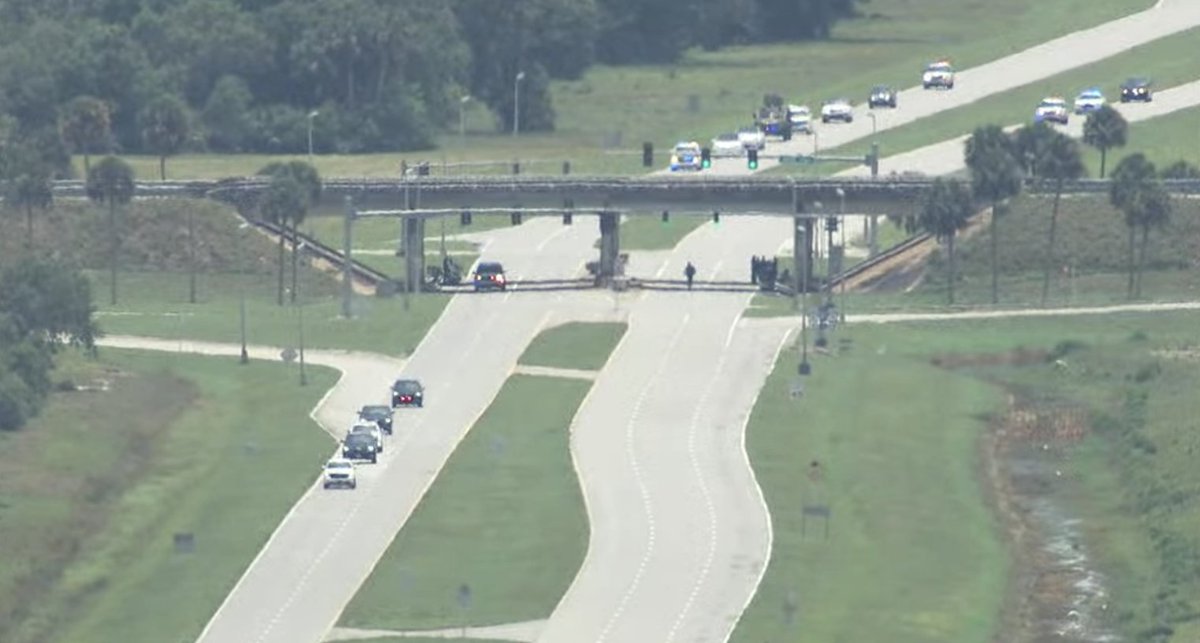 The astronauts have arrived at the launchpad:
Out of the Tesla and into the bathroom.
The SpaceX hosts say that Behnken and Hurley listened to AC/DC’s “Back in Black,” the Blues Brothers elevator scene version of “The Girl From Ipanema,” and the Army French horn version of the "Star Spangled Banner”
Out of the bathroom and back into the Tesla
Behnken and Hurley arrive at the rocket, get out of the Model X, and strain to see the capsule that will take them to space in under 3 hours.
Behnken reminds Hurley to give another thumbs up to the camera
Behnken and Hurley head into the elevator that will take them up to the staging area.
Here we go. Hurley is the first into the Crew Dragon capsule. Behnken gives the team members a wink.
Behnken now steps into the spacecraft (after giving another thumbs up. Guy’s got loads of ‘em.)
As the astronauts get strapped in, they start tapping away at the touchscreens they’ll use to control the Crew Dragon spacecraft.
Some weather NASA and SpaceX are dealing with today https://twitter.com/nadiamdrake/status/1265702012781572096

A better shot of the touchscreen display UI that the astronauts are working with.
Best part are the little digital timers that the astronauts have in their hands. Apparently a throwback: https://twitter.com/NASASpaceflight/status/1265704160139317248

One of the astronauts seems to have brought along a toy dinosaur — astronauts often bring a little plushie or the like on launches, which will start floating when they hit zero g. 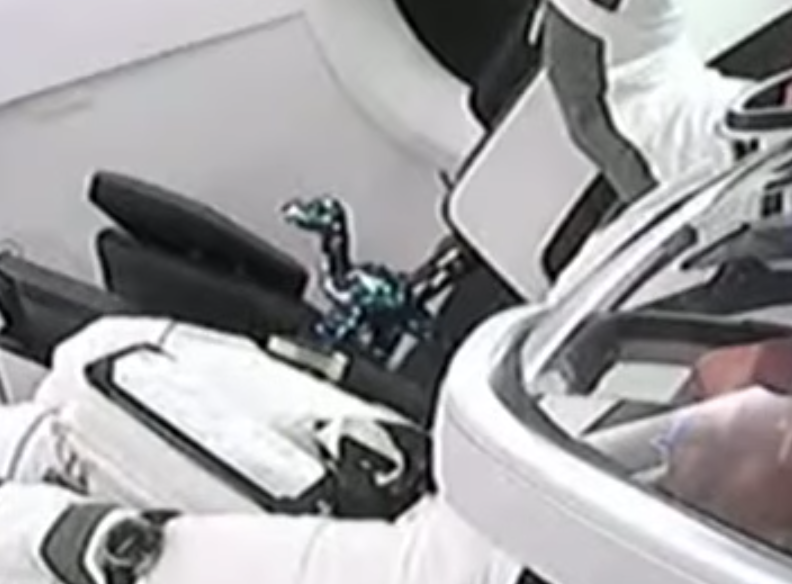 Another (forceful) thumbs up from Behnken as the astronauts run through their comms checks
Better shot of the toy here: https://twitter.com/lorengrush/status/1265706333564698625 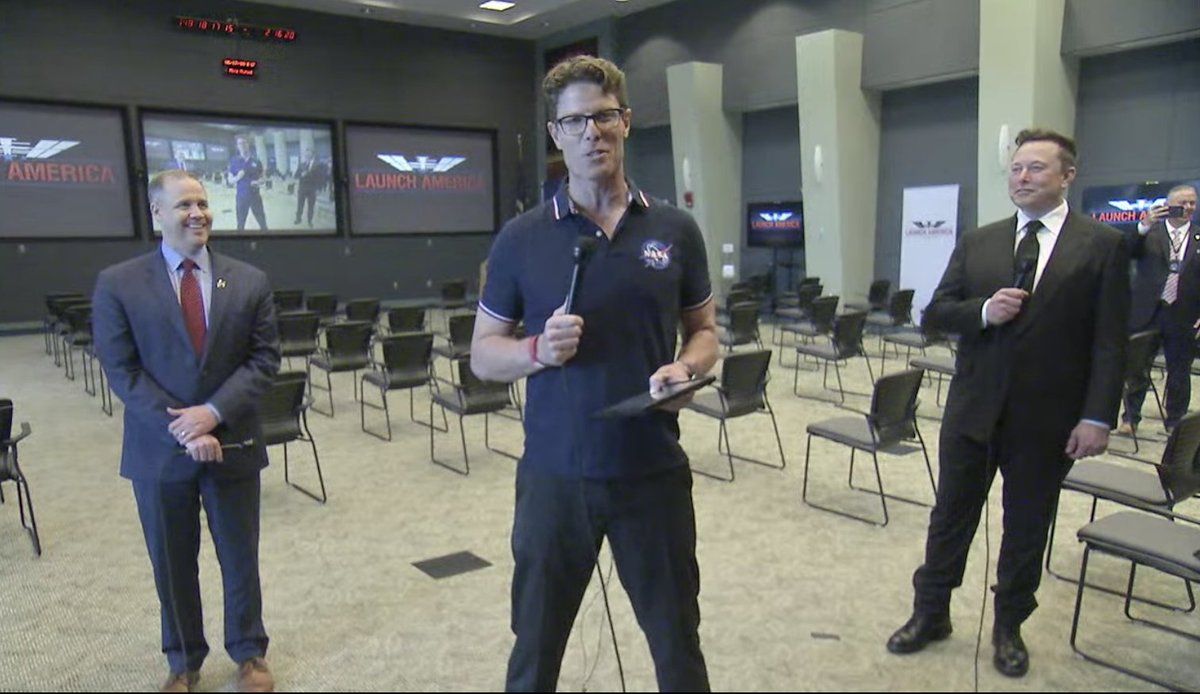 MUSK: This is a dream come true I think for me and everyone at SpaceX.

Says he never thought this would happen.
He says if someone had told him back in the early 2000s that he and SpaceX would be here, “I would have thought, man, I don’t know what you’re smoking [laughs] … No way is that true.”
MUSK: the spacecraft and the rocket have gone through literally thousands of tests. And “we’ve done a lot of flights.” This particular configuration of Falcon 9 has flown about 20 times.

“I don’t want to tempt fate, [but we have] a well proven rocket.”
Musk on what he said to Behnken's and Hurley’s families: “We’ve done everything we can to make sure that your dads come back.”
Musk says the sleek new SpaceX suits are part of the company’s mission to be “reinventing the dream of space” and to get people from “all walks of life” “fired up” about space
NASA administrator Bridenstine: “We need a new generation of many Elon Musks"
Asked about the Tom Cruise movie that’s being planned to be shot on the ISS, NASA administrator Bridenstine once again evades saying that Cruise is actually going
You can follow @sokane1.
Tip: mention @twtextapp on a Twitter thread with the keyword “unroll” to get a link to it.