Read on Twitter
I wrote a whole book that disproves this long-lived myth. My book was just republished by @Harvard_Press. It's not a hard book to find. But now @WilliamSitwell writes a book called "The Restaurant: 2000 Year History" and here it is again! I mean no ill to Mr. Sitwell, but...

"Out-of-work chefs of aristocrats opened restaurants after the Fr Revn" is a myth central to the notion of French restaurants as a _democratization_ of pleasure. It's a conceit formed in reaction to (against) the revolution's real politics. See https://www.hup.harvard.edu/catalog.php?isbn=9780674241770
The Invention of the Restaurant — Rebecca L. Spang | Harvard University Press

As Spang explains, during the 1760s and 1770s, sensitive, self-described sufferers made public show of their delicacy by going to the new establishments known as 'restaurateurs' rooms' to sip...

https://www.hup.harvard.edu/catalog.php?isbn=9780674241770
Think about it. By the time the aristos (some of them) flee France--certainly with war 1792--being one of their former servants isn't going to give you lots of start-up business opportunities. It's more likely to get you labeled an enemy of the nation, a counter-revolutionary.
The emblematic meal of the French Revolution wasn't a restaurant dinner cooked by former chef of Duke or Prince, but the so-called "Fraternal Banquet." Here's one image from @GallicaBnF Note the Liberty Tree, Liberty Caps, tricolor flag. This is the *ideal* of 1793-4. 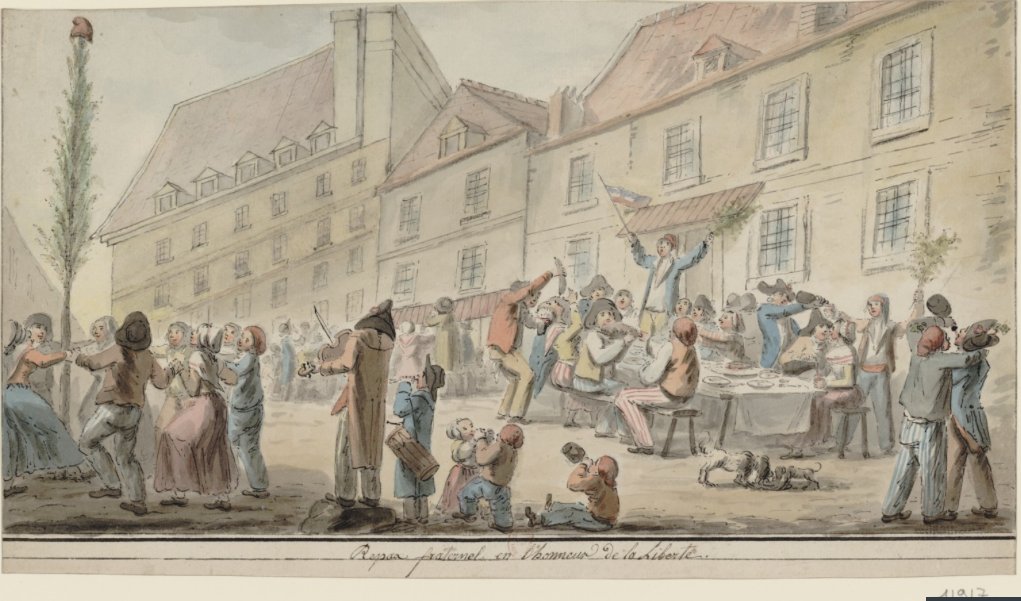 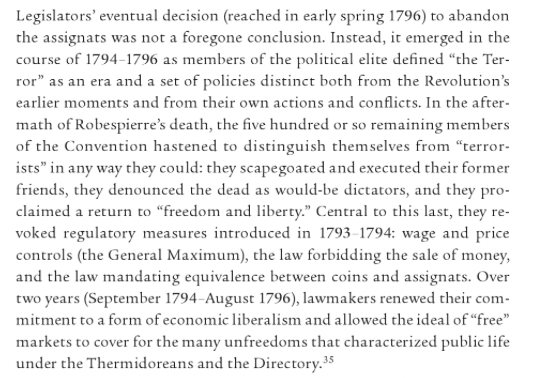 As "post"-Terror lawmakers abandoned social, monetary policies of 1792-4, prices soared, local admin foundered, much of France near anarchy. Bonaparte's army meanwhile "lived on the land" (sacked, pillaged) won battles, grew metaphorically fat. So too did army suppliers, etc.
The prolific, very readable author L S Mercier wrote a series of vignettes called "The New Paris." Mercier was a committed republican (jailed as a Girondin) horrified that 6+ years of revolution had created chaos, misery, AND a tiny group of fabulously wealthy war profiteers.
When Mercier described Paris restaurants in 1797-8, he was writing political criticism, social satire. (This is from Invention of the Restaurant, p. 143)

British travelers flocked to Paris during 1802 Peace of Amiens; they too saw restaurants. ONE famous one (Beauvilliers) *was* operated by a former aristo chef (but opened in 1780s). It wasn't democratization any more than Moscow restaurants in 1990s https://www.nytimes.com/1998/03/18/dining/eating-out-in-moscow-theme-park-cuisine.html
Eating Out in Moscow: Theme-Park Cuisine

Alessandra Stanley surveys restaurant scene in Moscow; says that over last two years, newly rich Russians have confected dozens of restaurants that have less to do with haute cuisine than high...

https://www.nytimes.com/1998/03/18/dining/eating-out-in-moscow-theme-park-cuisine.html
The field of Food Studies/Food History has grown enormously since _The Invention of the Restaurant_ was first published. I couldn't begin to list all great work. Jeffrey Pilcher on Mexican food, Edward Wang's history of chopsticks, Emma Spary's books on food/history of science.
[Finis] There are now so many good, well researched, thoughtful books on history of food + eating that it's a bit of a shock to encounter one that recycles tired myths, platitudes. Maybe it was just the interview format? This whole thread provoked by https://lithub.com/how-will-restaurants-reinvent-themselves-post-lockdown/
How Will Restaurants Reinvent Themselves Post-Lockdown?

William Sitwell is a food critic, writer and broadcaster. He’s a carnivore but believes that occasional vegetarianism and choosing good meat is the most sustainable way forward. And although he onc…

https://lithub.com/how-will-restaurants-reinvent-themselves-post-lockdown/
You can follow @RebeccaSpang.
Tip: mention @twtextapp on a Twitter thread with the keyword “unroll” to get a link to it.