Read on Twitter
1. Why do so many people want to ban #fracking & #oilandgas production in their communities?

Read this @grist story by @NaveenaSivam to understand.

Inspections of oil, gas, and mining in Pennsylvania have dropped off by 70 percent since the COVID-19 shutdown.

#oilandgas production is deemed "essential" but protecting #publichealth isn't, even when the state promises otherwise.
3. How else can we interpret that #oilandgas operations continue (at a slight decline) but inspections have dropped precipitously? 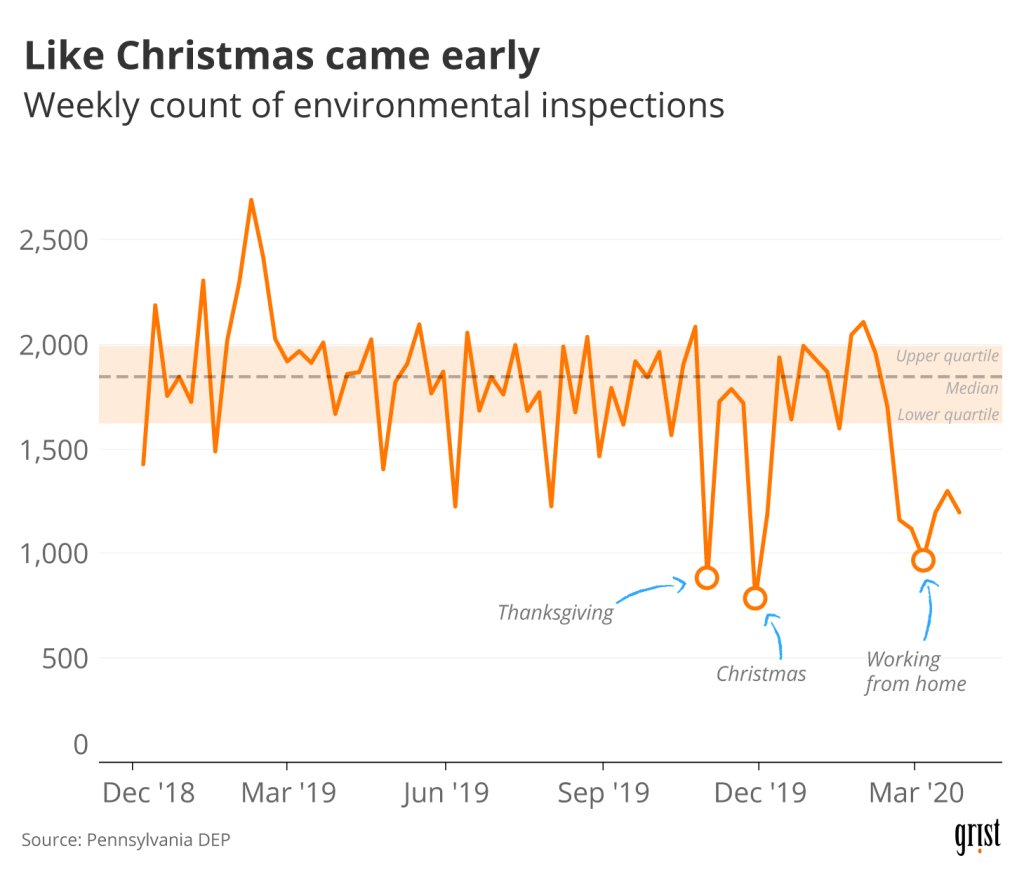 4. The Department of ENVIRONMENTAL Protection's mission is "to protect Pennsylvania's air, land and water from pollution and to provide for the health and safety of its citizens through a cleaner environment."

Do you see mention of protecting #oilandgas operations? I don't.
5. Yet time and again when #publichealth conflicts with #oilandgas, regulators prioritize the #fracking industry ahead of their MISSION to protect the public.
6. Unfortunately, PA is not only not unique, they're one of the *better* states when protecting #publichealth from #oilandgas pollution relative to (for example) Texas or North Dakota.

in PA (and perhaps other states), number of inspectors (think #publichealth protectors) has DECLINED since the onset of the #fracking boom.

This isn't a Wolf Admin problem, it's systemic. https://grist.org/energy/pennsylvania-regulators-promised-to-keep-an-eye-on-polluters-during-the-pandemic-theyre-struggling/
Pennsylvania regulators promised to keep an eye on polluters during the pandemic. They’re struggl...

Inspections of oil, gas, and mining in Pennsylvania have dropped off by 70 percent since the COVID-19 shutdown.

https://grist.org/energy/pennsylvania-regulators-promised-to-keep-an-eye-on-polluters-during-the-pandemic-theyre-struggling/
8. Given the political will it would take to *try* to properly regulate #oilandgas (really putting the public 1st), and the little time #climate science gives us to avoid #climate catastrophe, better use the effort to build political will to end #fossilfuels entirely.
9. If you don't believe, consider Colorado. Maybe THE BEST state in terms of oversight. Last year the state passed SB181 explicitly requiring #publichealth to be prioritized ahead of #oilandgas extraction, even if that meant NOT EXTRACTING. The result?
10. Broomfield, CO, in trying to block a particularly polluting phase of #fracking during the lockdown when it would endanger nearby residents who couldn't leave... https://www.denverpost.com/2020/03/26/broomfield-halts-oil-gas-production-coronavirus/
Broomfield poised to halt oil, gas operation until coronavirus health crisis passes

https://www.denverpost.com/2020/03/26/broomfield-halts-oil-gas-production-coronavirus/
11. ...could not b/c of the company's legal threats & state support of the company!

"I do not see any need for Extraction to halt operations or take other measures at this point' - COGCC head Jeff Robbins https://www.motherjones.com/environment/2020/05/a-nearby-fracking-site-has-these-retirees-sheltering-in-place-and-scared-for-their-lives/
A nearby fracking site has these retirees sheltering in place and scared for their lives

https://www.motherjones.com/environment/2020/05/a-nearby-fracking-site-has-these-retirees-sheltering-in-place-and-scared-for-their-lives/
12. The history of #oilandgas oversight shows that whenever #publichealth concerns are balanced against #oilandgas, the public comes up short -- even when regulators are explicitly directed otherwise.

The only way to protect one's health from #fracking is to not allow it /END
You can follow @Earthworks.
Tip: mention @twtextapp on a Twitter thread with the keyword “unroll” to get a link to it.