Read on Twitter
Okay. So the Moore / Gibbs #PlanetoftheHumans has been temporarily taken off Youtube because..........copyright infringement.

There are a few very significant things buried in this story, so let's excavate them. Time for a short 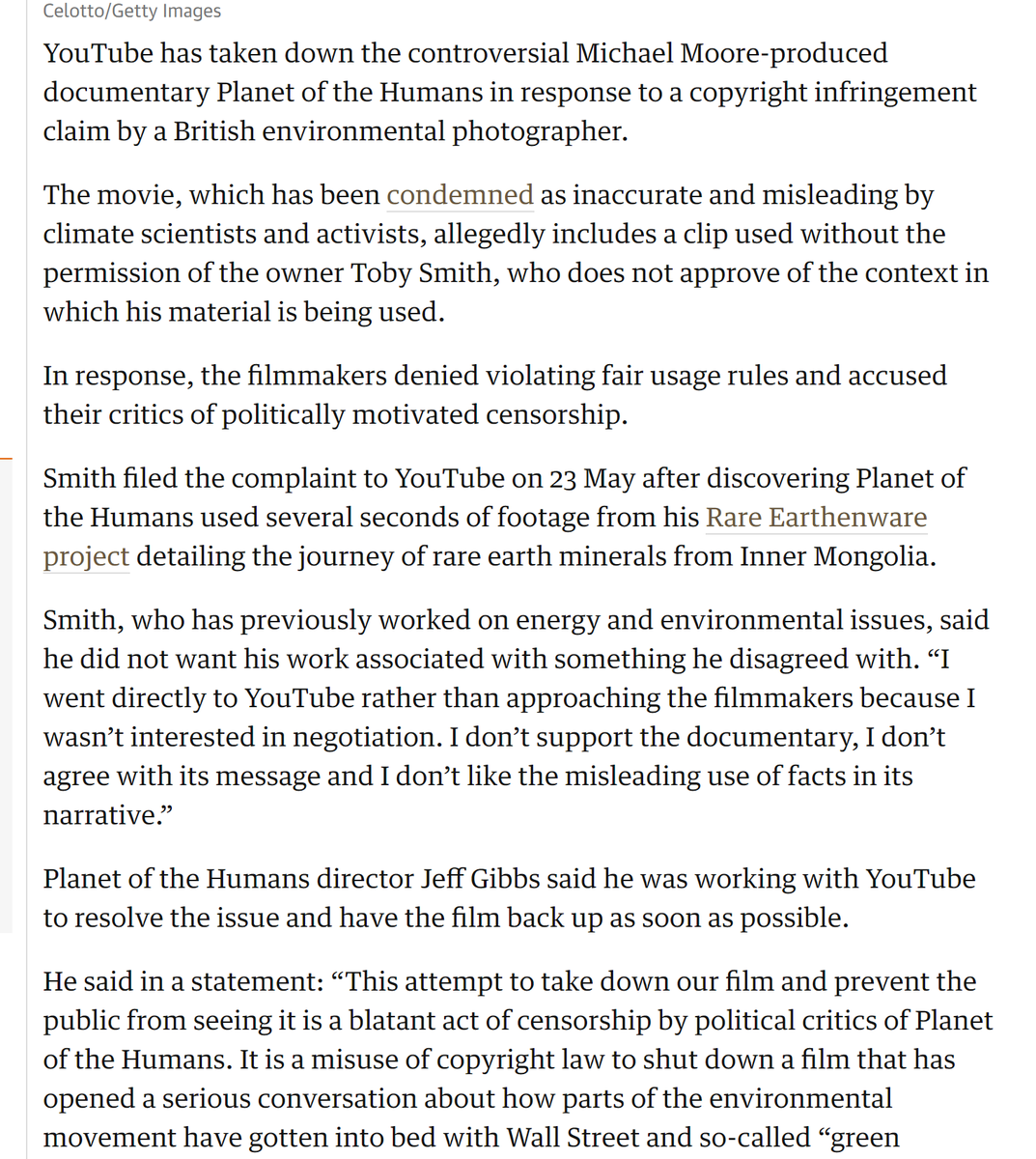 First up - this, and the preceding calls for the film to be pulled due to misinformation, fit a narrative the filmmakers have been weaving for a while: "THEY don't want you to see the film! THEY'RE trying to censor us!" 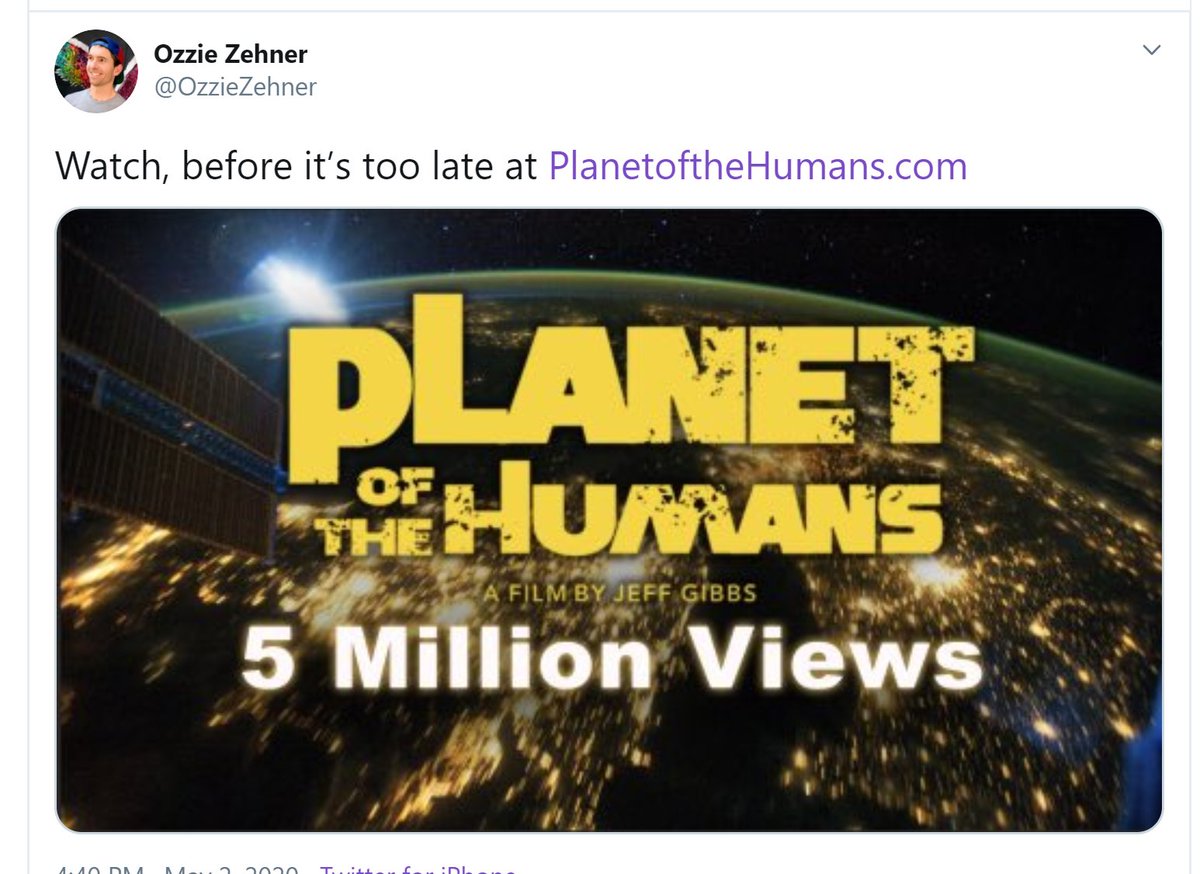 When your core pathway to communication is deception, you must deal with objections.

Simple solution: if someone tries to demand a truth standard, you say they're trying to silence you. It works well: it's been a staple of conspiracy thinking in climate denial for years 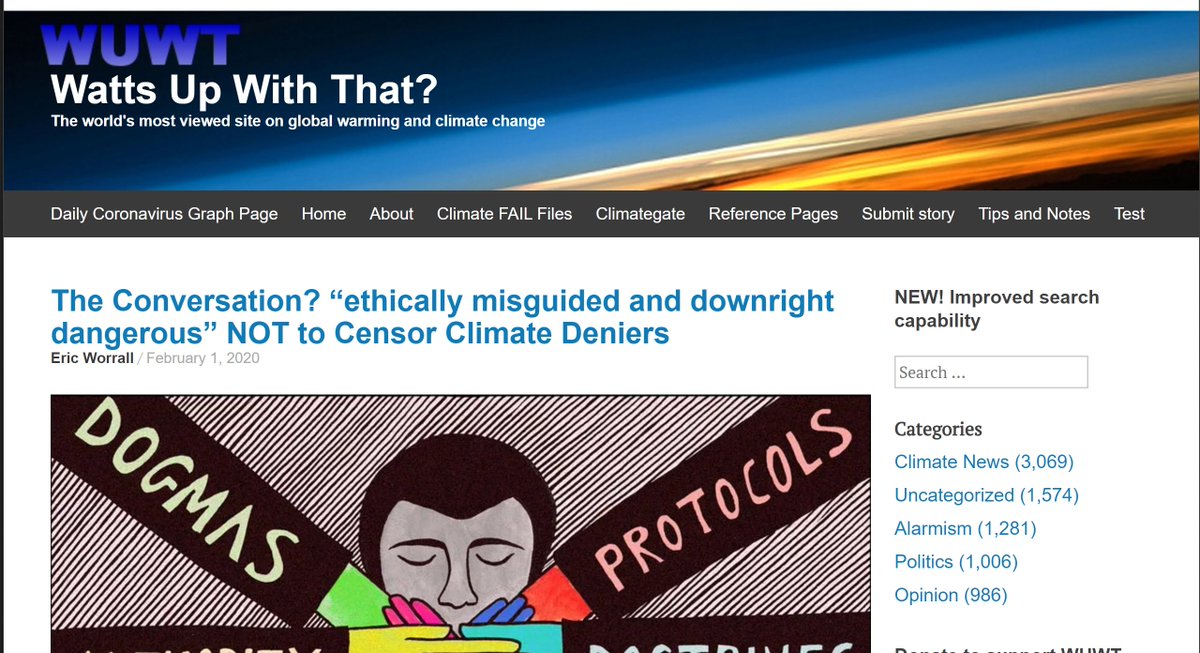 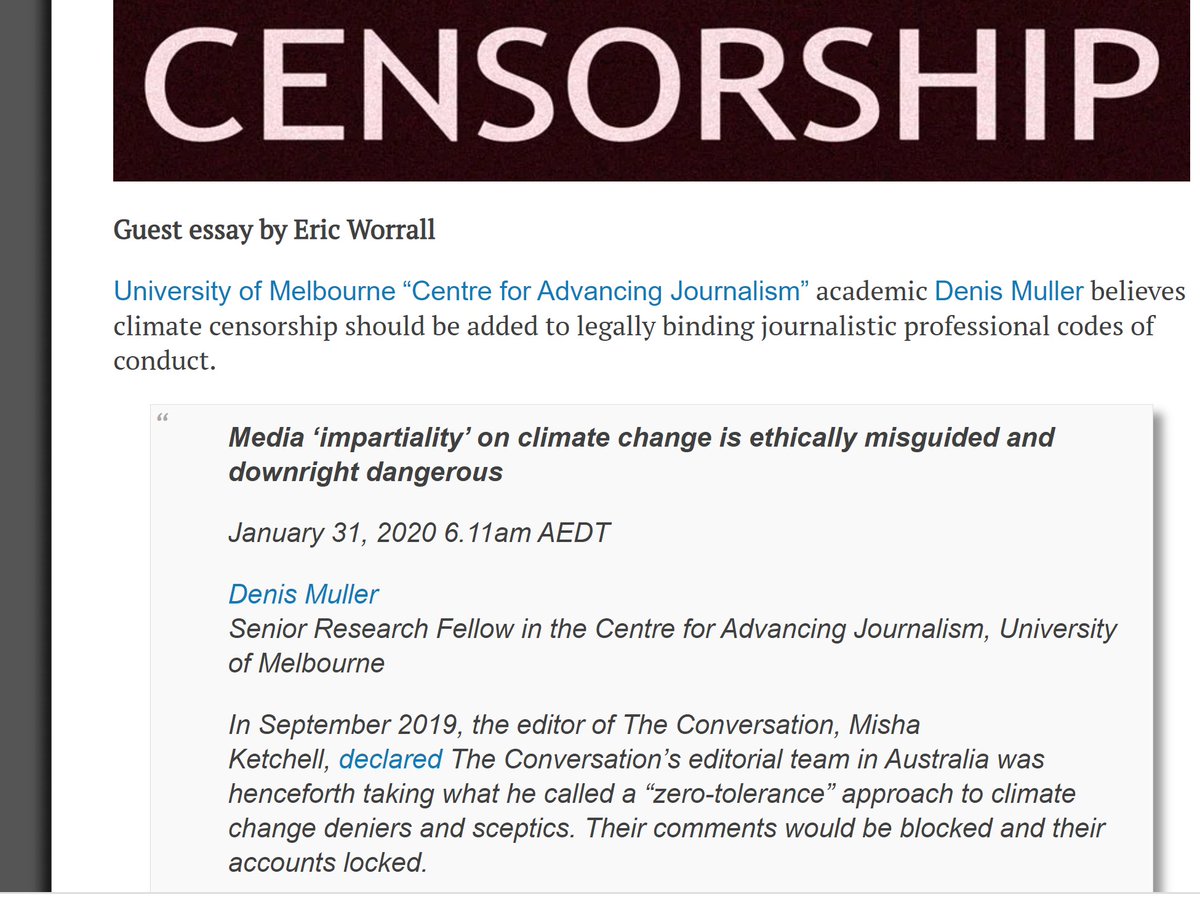 Gibbs - the director - seems pretty deep into the conspiracy crowd. Here's a Facebook post from Michael Moore's former fact-checker, who denounced the film and distanced herself from the pair: 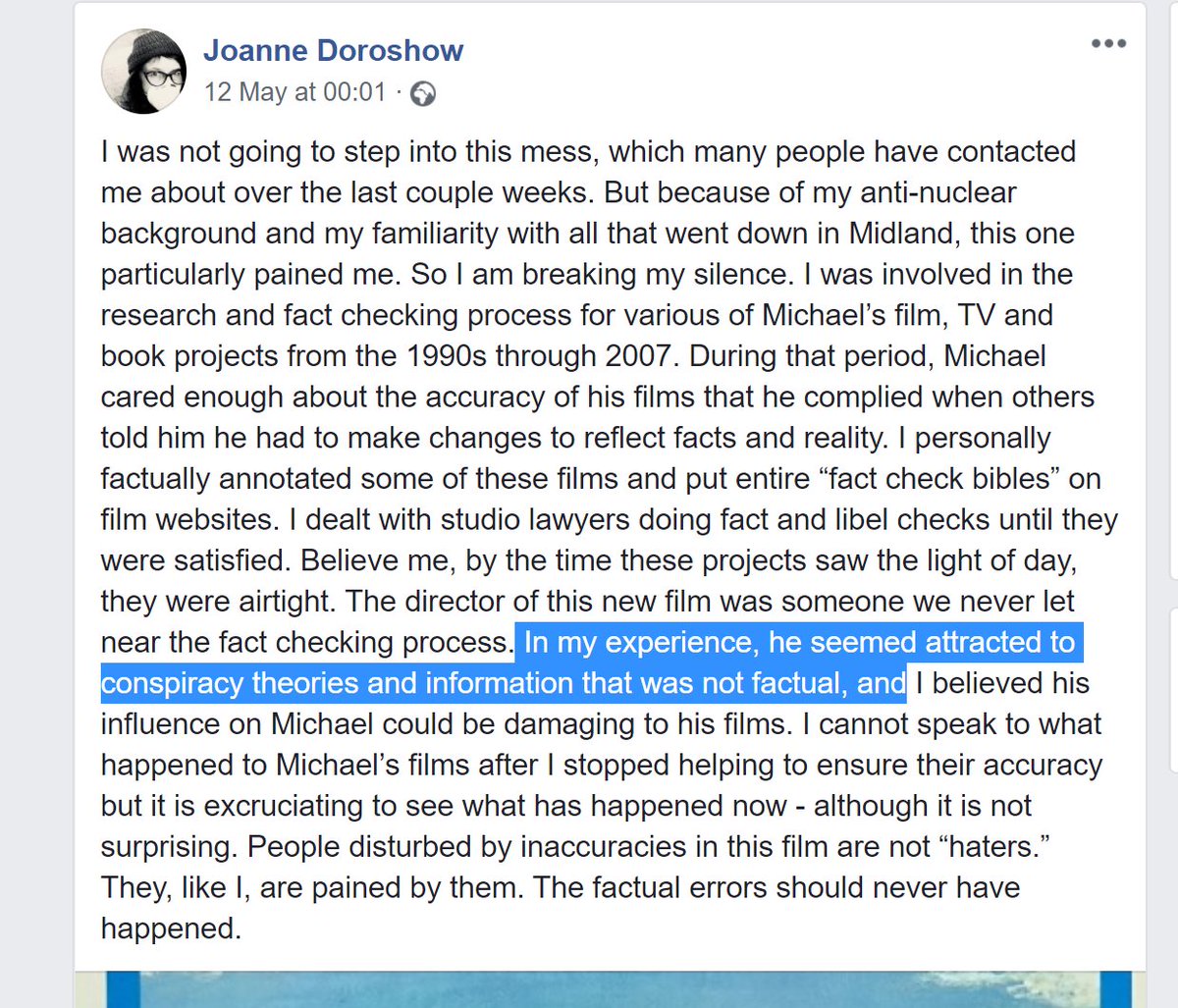 There is also a truly weird left-not-left network of people who believe Greta Thunberg was 'manufactured' by 'green capitalist' forces. The director of #PlanetoftheHumans is connected with them, too, based off old public FB posts: https://twitter.com/KetanJ0/status/1258464052348583937

Okay. So. Here's the 𝖙𝖍𝖎𝖓𝖌. These objections to the gnarled fingers of capitalism crushing the climate movement?

They're published in *actual* partnership with the fourth biggest corporation in the world: Google. 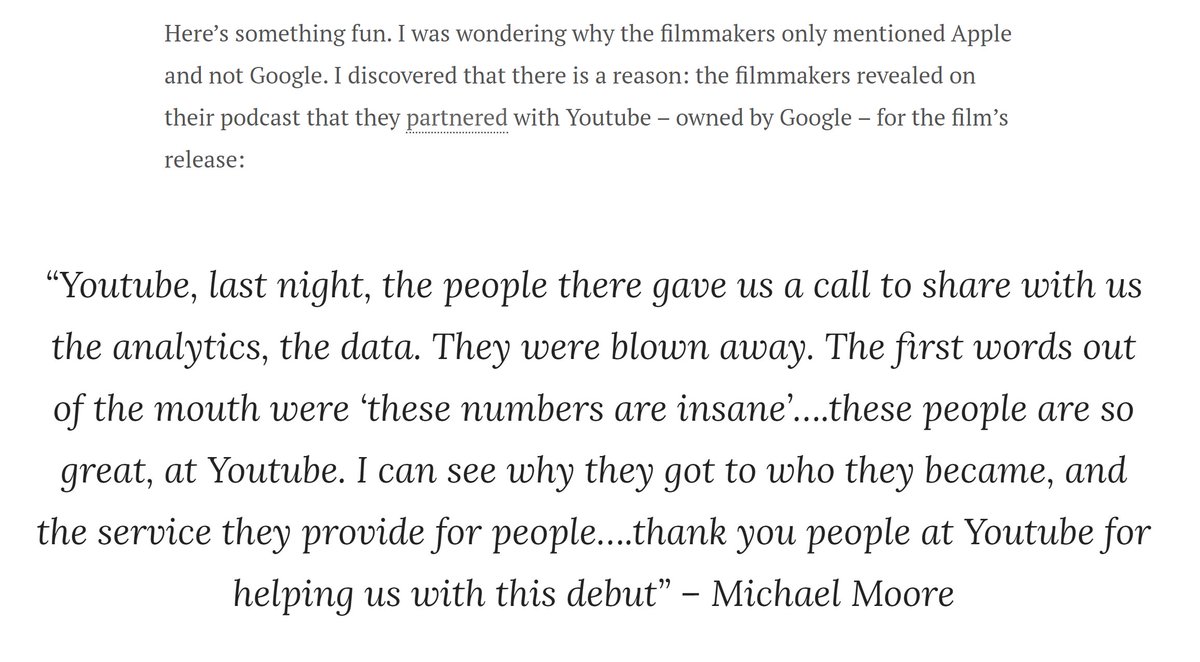 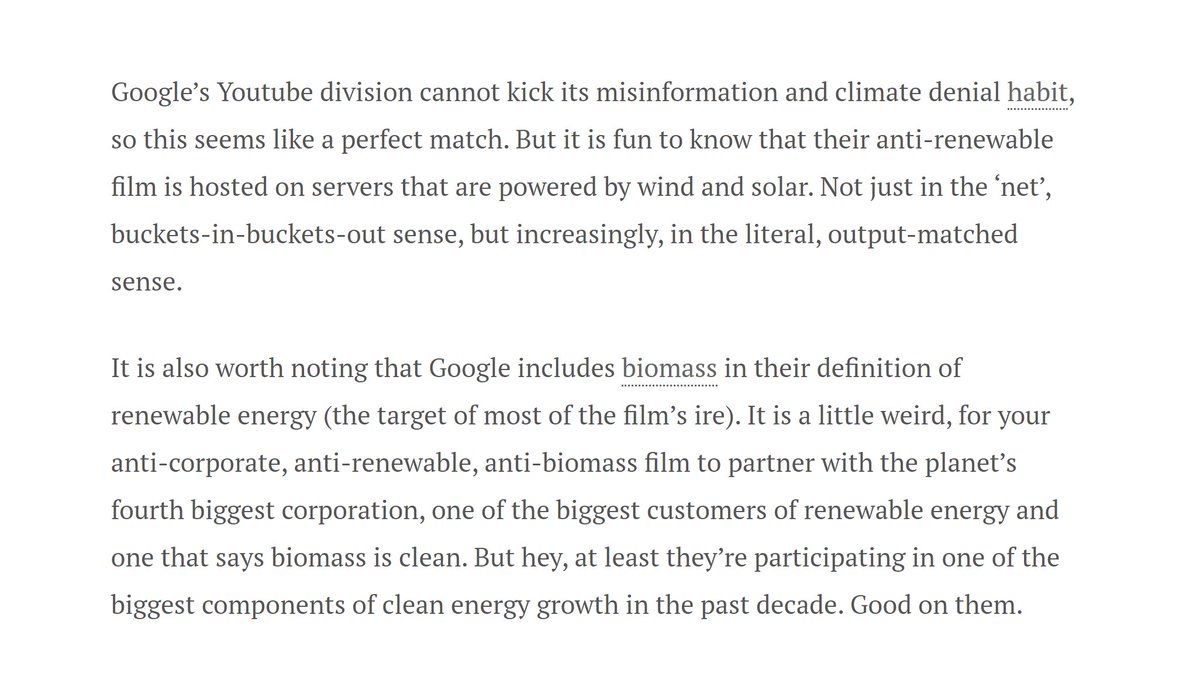 Moore, Gibbs and Zehner are actively engaging in the marketplace of misinformation. It is a massive, for-profit industry. It causes direct harm to human life and the natural world.

Big tech keep insisting they're fixing it. They're not. https://www.theguardian.com/commentisfree/2020/apr/25/social-media-no-longer-tolerates-toxic-lies-dont-believe-a-word-of-it
Social media no longer tolerates toxic lies? Don't believe a word of it

Conspiracy theories put lives at risk. But how much do Google and Facebook care?

https://www.theguardian.com/commentisfree/2020/apr/25/social-media-no-longer-tolerates-toxic-lies-dont-believe-a-word-of-it
Michael Moore is a Bullshit Capitalist. He knows there are profit margins in compelling lies distributed to a large audience using the massive technological resources of a corporation like Google.

That's why YT took action on copyright for #PlanetoftheHumans, but not the lies.
So, all the enviros, degrowthers, depopulation and anti-capitalist people who decided to welcome this movie with open arms: you became participants in Bullshit Capitalism too. These massive companies want to find people who will happily accept lies, rather than asking for better.
It's easy to cry hypocrisy, but it isn't *really* hypocrisy, because when it comes down to it, their gripe isn't with capitalism, or growth, or population.

It's that they're not at the centre of the spotlight - and they want to be. Bullshit Capitalism is a means to that end.
Tech companies are the main arms dealers for algorithm-fuelled misinformation. Google is bad, and their Youtube subdivision is one of the worst. These companies need to act pre-emptively, because reactionary actions are touted as "censorship". This is getting worse.
The end!
Appendix A: @KateAronoff on 'Climate Sad Bois' is an absolute must-read https://www.thenation.com/article/archive/jonathan-safran-foer-we-are-the-weather-climate-review/ 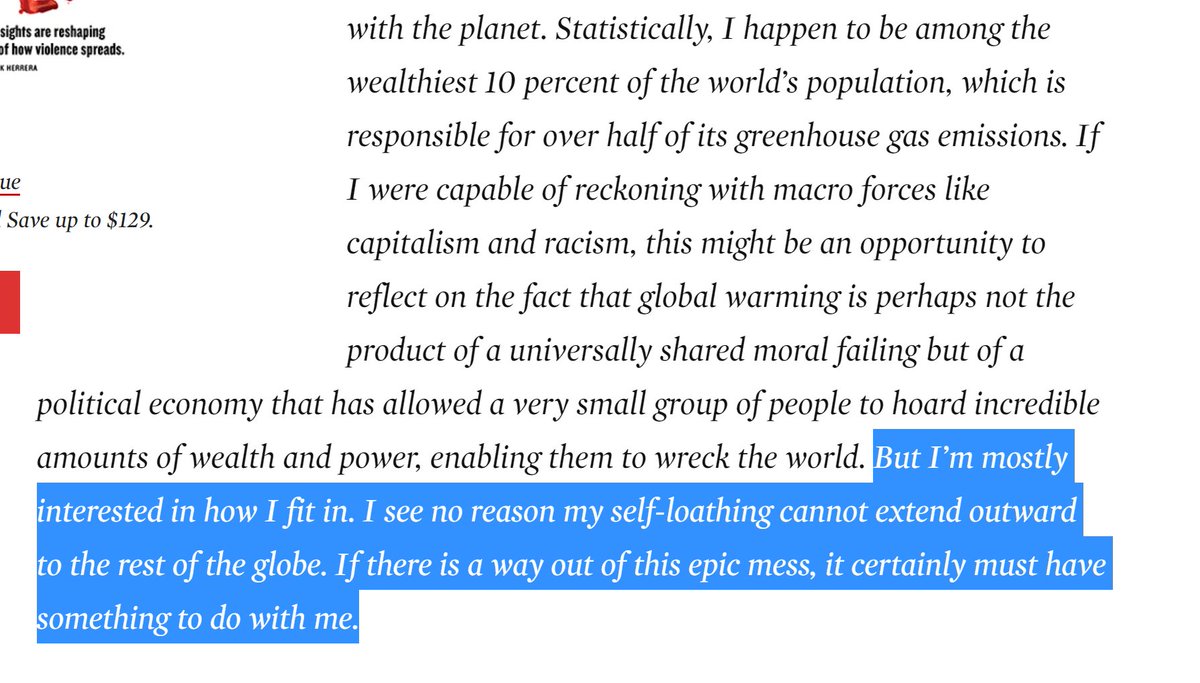 Appendix B: Further examples of "They're trying to hide the truth" playing out like clockwork.

There is no other way this could have gone. This is absolute supercharged catnip for the denier / conspiracist crowd. They are vibrating with raw emotion. 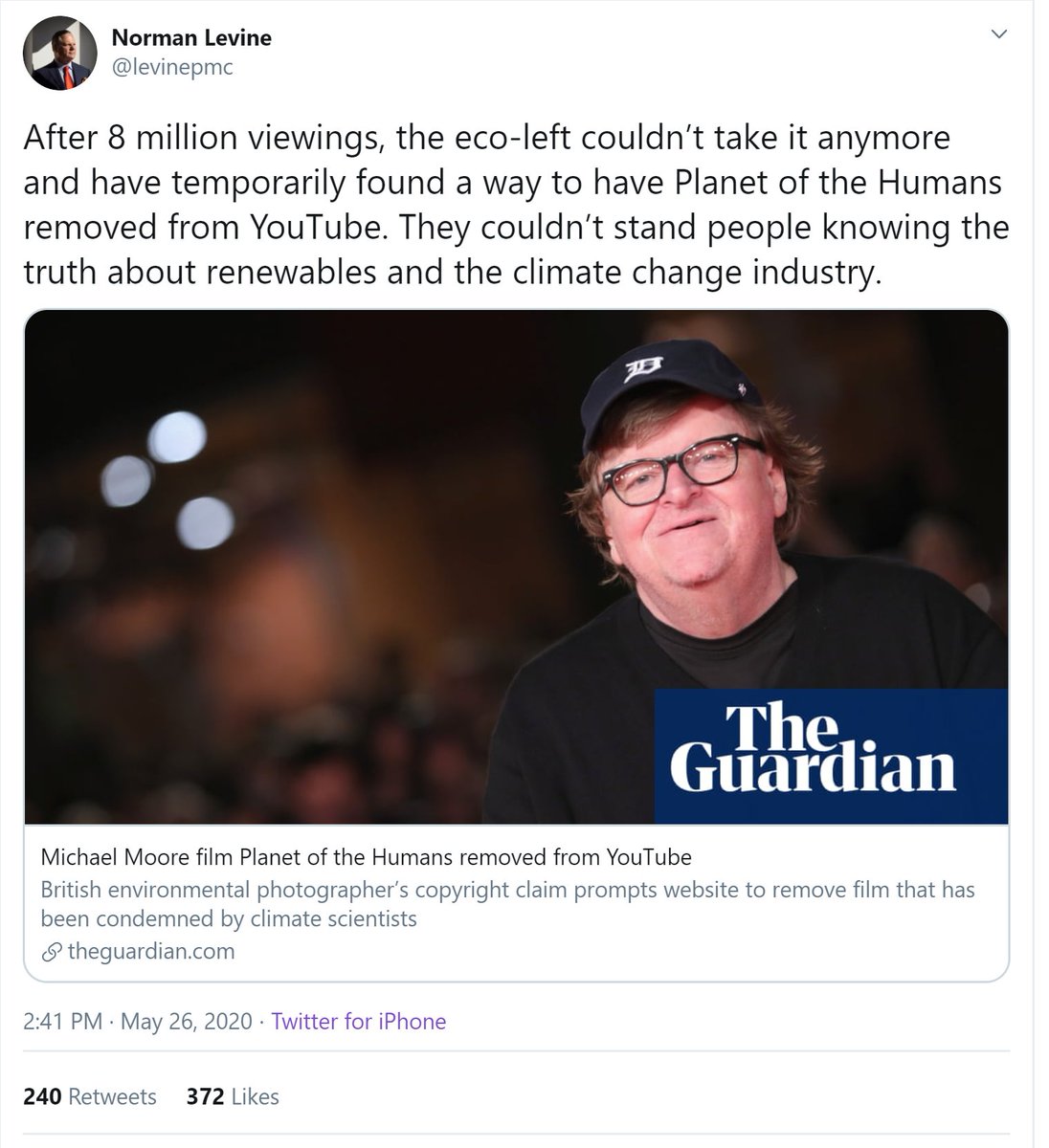 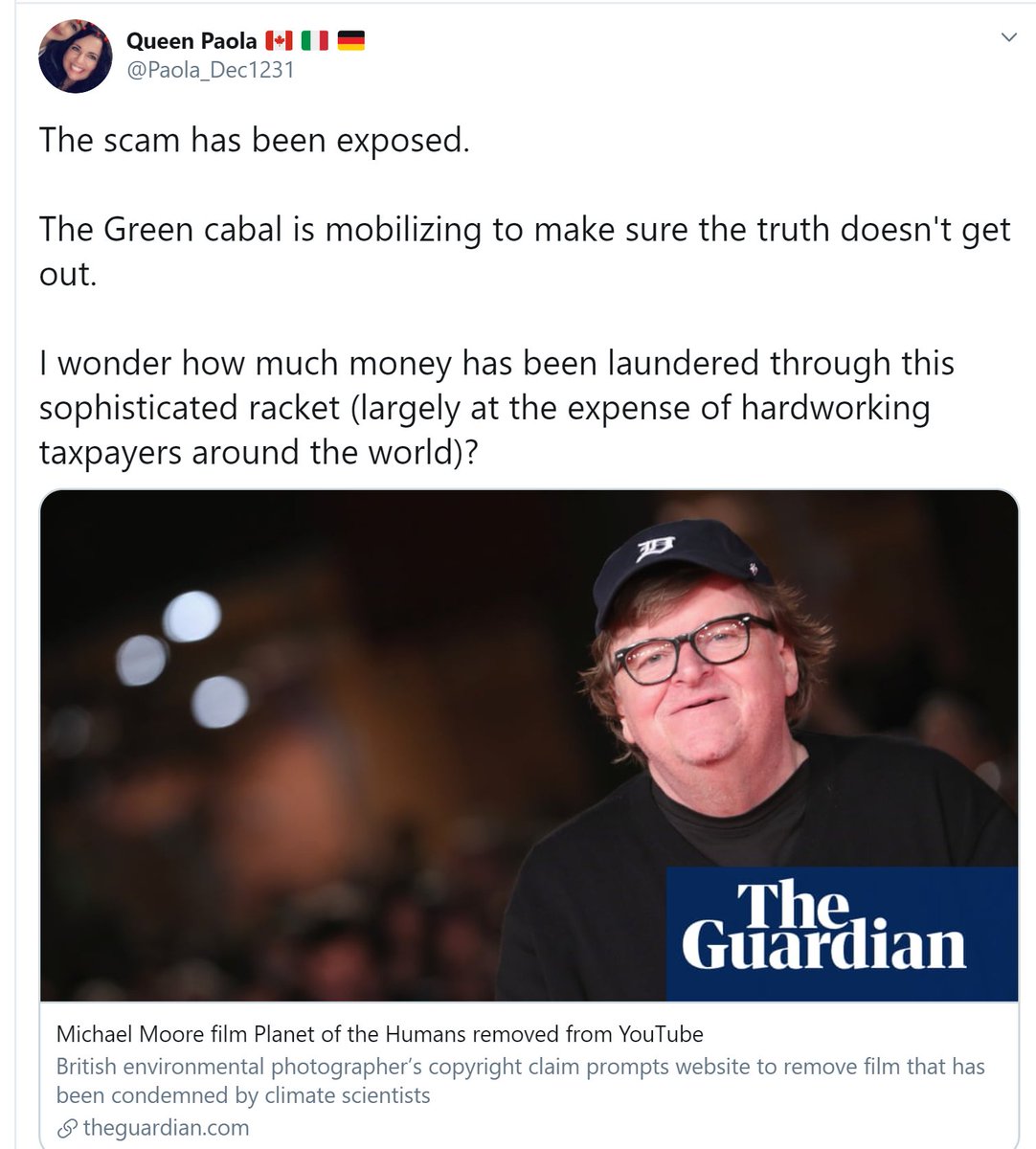 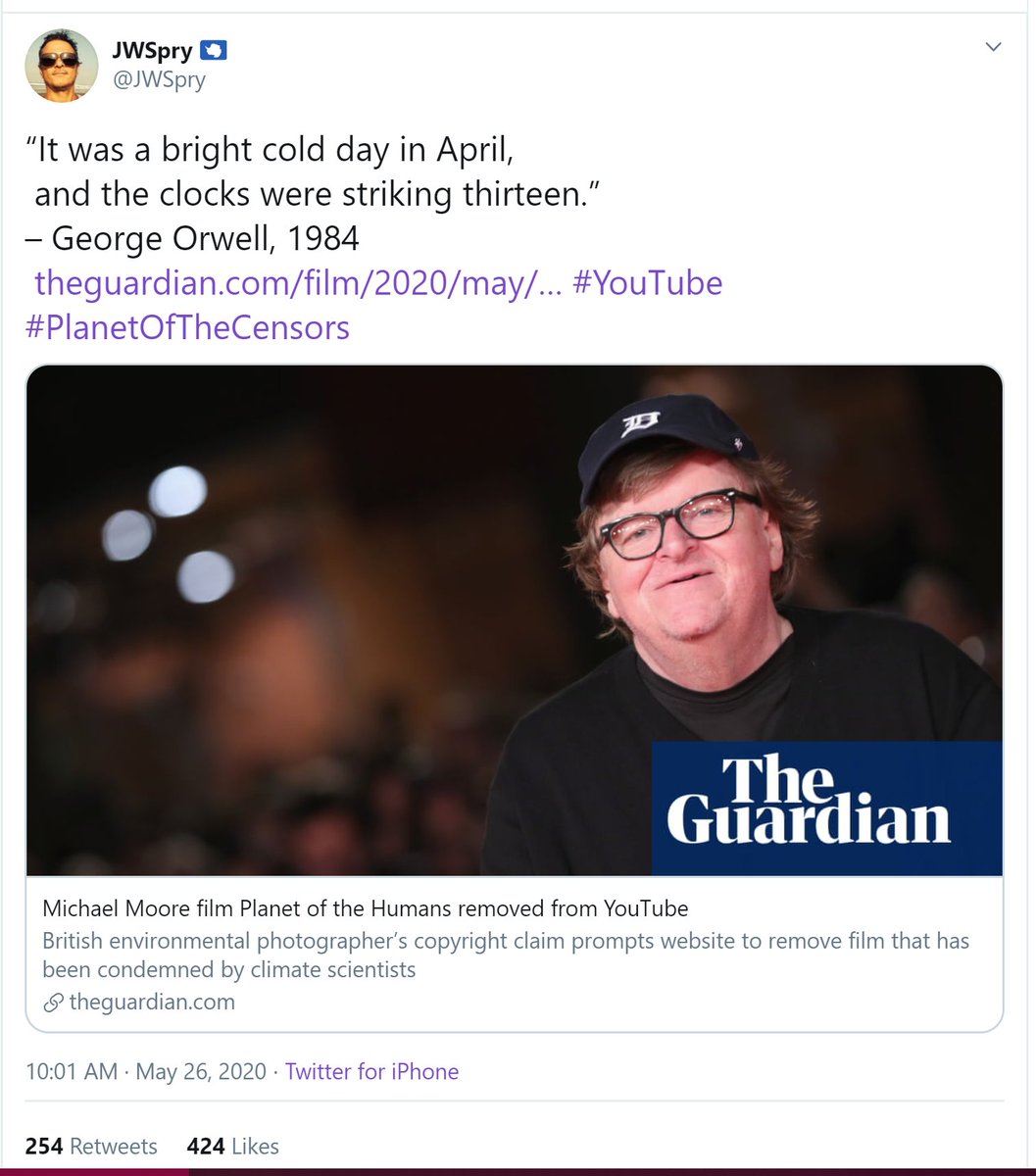 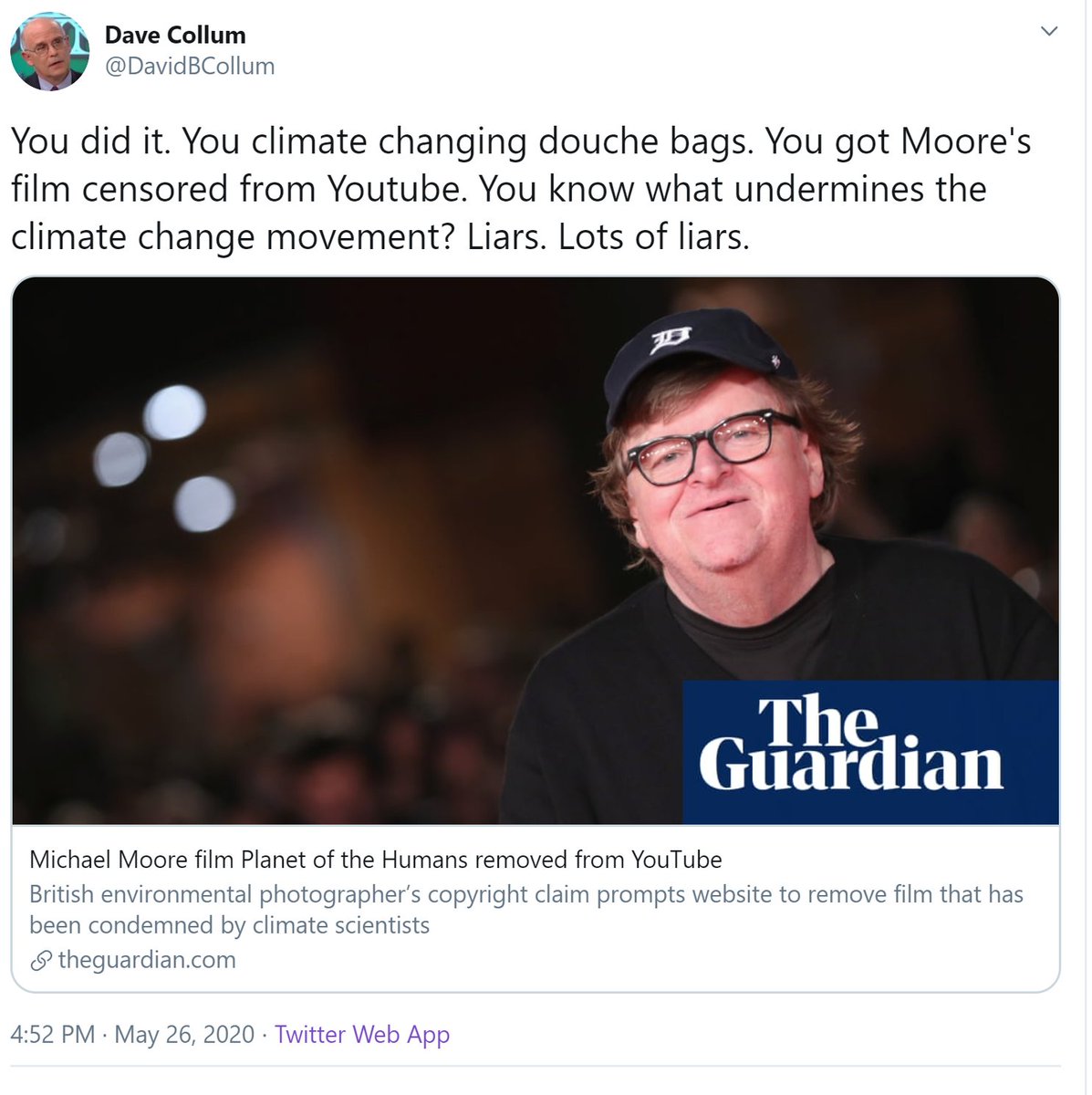