In honor of Memorial Day, here are some of the most interesting and inspiring stories that define our history. 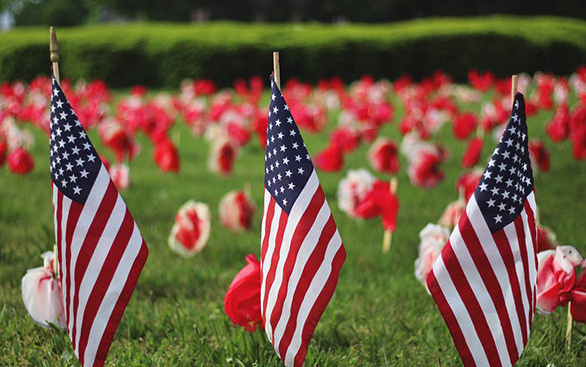 "Our forefathers fought for liberty, freedom, and republican ideals the likes of which had never before been seen in any style of organized government preceding them. In many ways then, the American Revolution was an experiment." 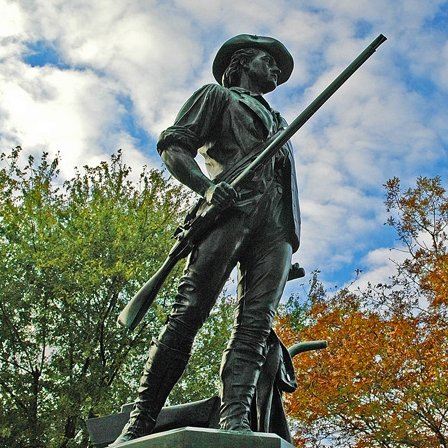 For the better part of the 17th and 18th centuries, the relationship between Great Britain and her North American colonies was firm, robust, and peaceable. The colonies enjoyed a period of “salutary

"The Oneida provided American forces with troops and spies throughout the Revolution, beginning at the Battle of Oriskany in New York's Mohawk Valley August 1777."

The Oneida are one of the Six Nations Iroquois (Haudenosaunee), and the only one that openly declared its support for the American Revolution.

More allies are even better.

"The victory at Yorktown would not have been possible without the French. French money and credit paid for the campaign. French troops made up half the army there."

There might be no Fourth of July holiday without the French. Their help was vital to the winning of the War for Independence, and the survival of the early republic. The tragic story of one French...

George Washington out-spied the British, and pioneered a number of military intelligence tactics.

"The war for independence from Great Britain was not just one of battles and firearms, it was one of intelligence."

Did you know George Washington was a Spymaster? Read about it here.

Help can come from unexpected places.

"...he had been a spy for General Washington, while employed in abusing him, and had imparted useful information, which could not otherwise have been obtained."

This article was originally published in Journal of the American Revolution, Vol. 1 (Ertel Publishing, 2013). Solving “the Most Astounding” Mystery of the American...

One of the most extraordinary (and least known) stories in American history:

Badly outnumber on Day 2 at Gettysburg, a battle-hardened regiment from the new state of MN makes a heroic suicide charge to hold the line.

The First Minnesota at Gettysburg
http://www.laurabillingscoleman.com/project/the-first-minnesota-at-gettysburg-2/ 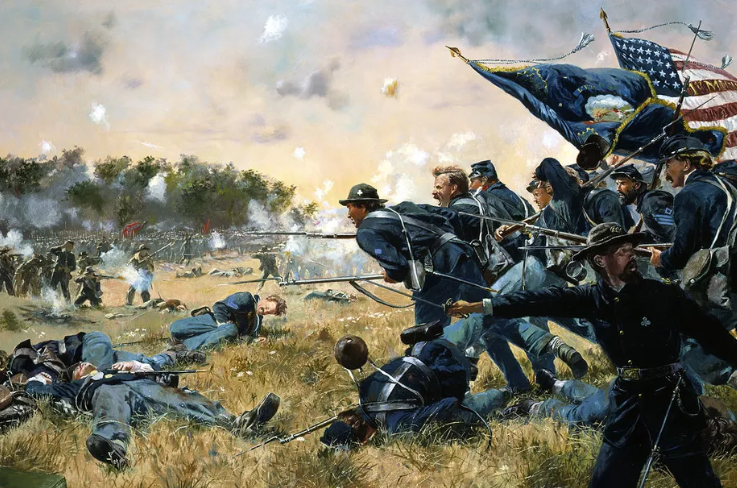 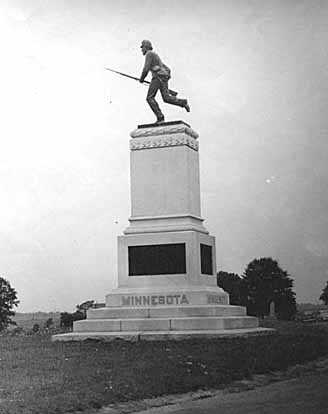 "Because one day at Gettysburg they lost more of their men who went into the fight than anybody else had - ever.

...those 300 seconds they then won for the United States have proven timeless."

Battle Of Gettysburg Day 2: The Charge To Win 300 Seconds
https://www.esquire.com/news-politics/news/a23314/second-day-of-gettysburg-battle-070213/ 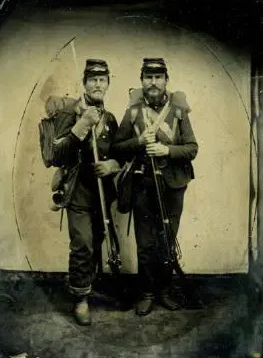 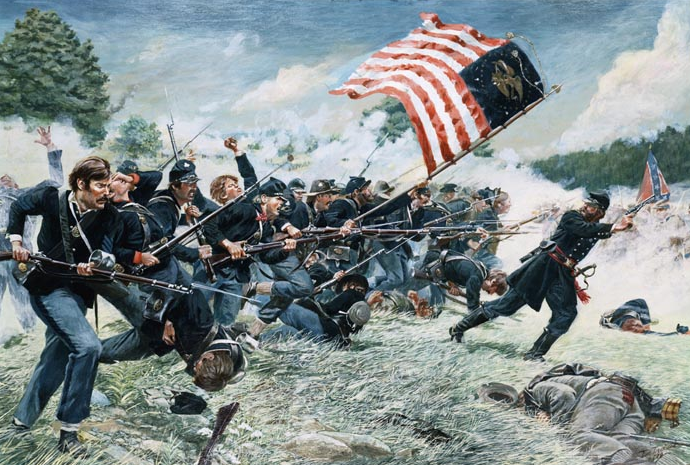 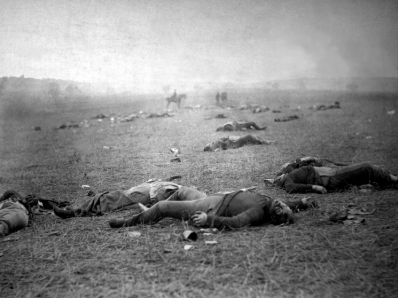 Incredibly, the 100 or so men from the First Minnesota who could still fight on Day 3 at Gettysburg again found themselves in the thick of the action.

During Pickett's Charge, Cpl. Henry O’Brien picked up the the regimental battle flag and charged the approaching rebels. 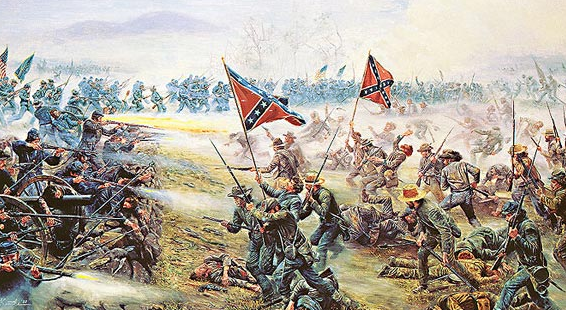 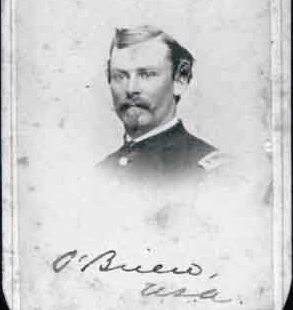 The other men followed, including Private Marshall Sherman, who captured the battle flag of the 28th Virginia Infantry Regiment while fighting barefoot.

Both O'Brien and Sherman received the Medal of Honor.

Minnesota still has that confederate flag, and will not return it. 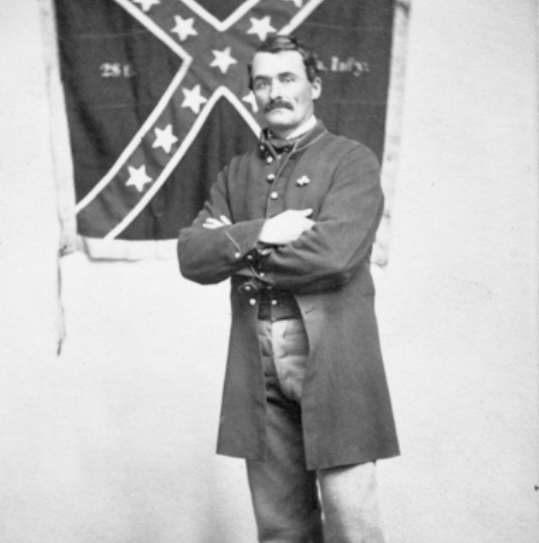 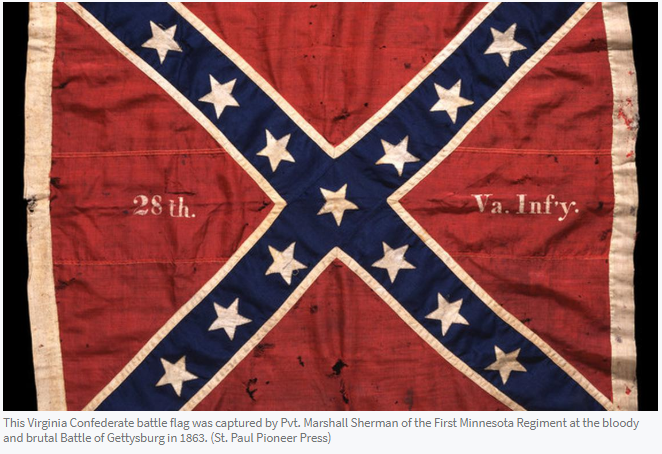 "The Confederacy discovered overnight...Harriet Tubman was a formidable secret weapon whose gifts should never be underestimated."

"The regiment would go on to prove itself in combat operations throughout the rest of the war, receiving the French highest honor, the Croix de Guerre, for its unit actions."

Though the debt is largely overlooked, Tolkien’s supreme literary achievement, “The Lord of the Rings,” owes a great deal to his experience at the Somme.

The Battle of the Somme, a century ago, left its mark on the “Lord of the Rings” author.

"Major Howard Connor, who was the signal officer of the Navajos at Iwo Jima, said, “Were it not for the Navajos, the Marines would never have taken Iwo Jima.”

"In addition, thousands of Mexican nationals living in the United States registered for military service during World War II."

Most may not think of Mexico as contributing to the Allied effort, but it contributed key resources, as well as fighting power.

"Many have said the unit stands as the most decorated unit for its size and length of service in Army history."

"In wartime, truth is so precious that it should always be attended by a bodyguard of lies." -- Winston Churchill

"While the intent to invade could not be concealed, the location had to be if there was going to be any chance of success."

The commander of the [Nazi POW] camp was furious, storming up to Edmonds and shouting, "All of you can't be Jewish?!"

"We are all Jews here," Edmonds responded.

Decades after his death, an American soldier who saved the Jews under his command in a German POW camp is honored by Yad Vashem, the Holocaust museum in Israel.

Had the Allied troops failed, Huxen says, “democracy would’ve been completely stamped out and crushed across continental Europe.”

"Mueller, for his part, not only volunteered for the Marines, he spent a year waiting for an injured knee to heal so he could serve."

"Perhaps he’s been forgotten because he was a good, simple man — hard-working and generous. He held fast to what he believed was right and stood up against wrongdoing."

William Colvill — does that name ring a bell? Unless you're a Civil War history buff, this name probably doesn’t mean anything to you yet. Perhaps he’s been forgotten because he was a good, simple...

I'll finish with a few quotes from a speech that a Republican president gave 90+ years ago while dedicating a monument to the Civil War hero from the previous Tweet. 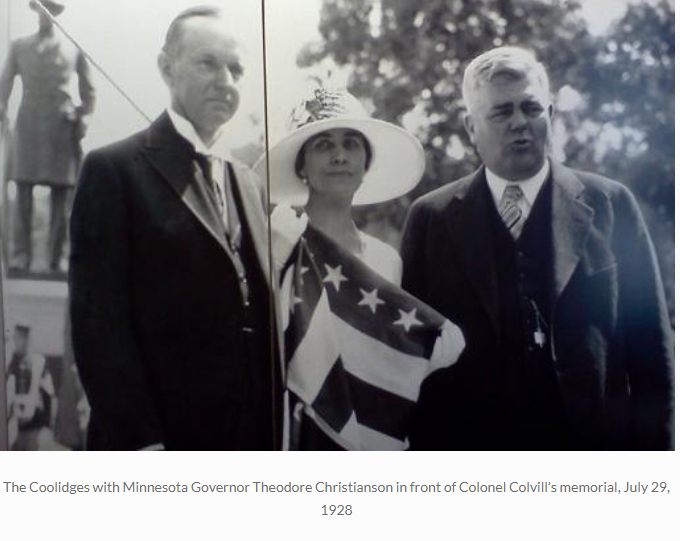 "Heroism is not only in the man but in the occasion. While there is a certain glamor which attaches itself to the peril which the highwayman and the bandit incur in their criminal activities, it is not genuinely heroic." 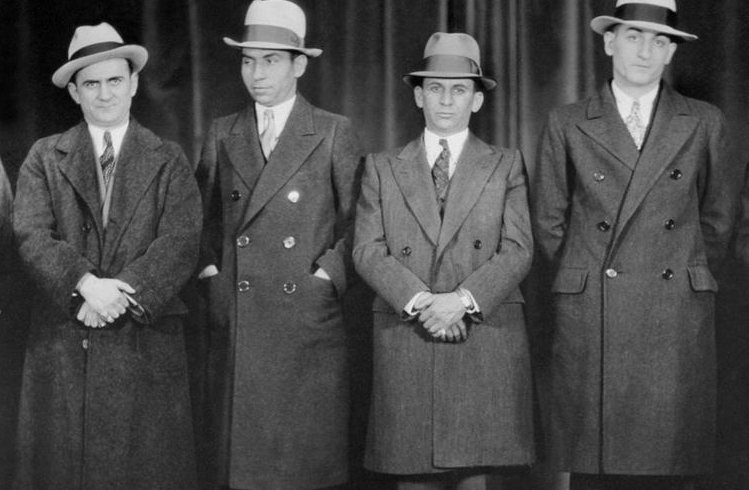 "It will not survive analysis. It leads nowhere. Having no moral quality, it provides no inspiration. It is only a counterfeit of the reality. If it is remembered at all, it is not as a blessing but as a curse." 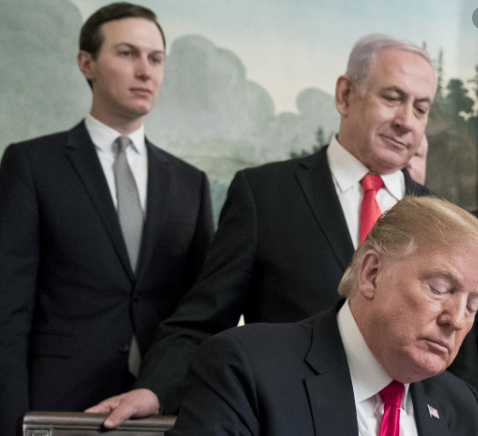 "There was in their deed no element of selfishness, no hope of personal gain. It stands as an exhibition of pure patriotism, of supreme sacrifice for the integrity of the Union, and the inviolate sovereignty of the Federal Constitution." 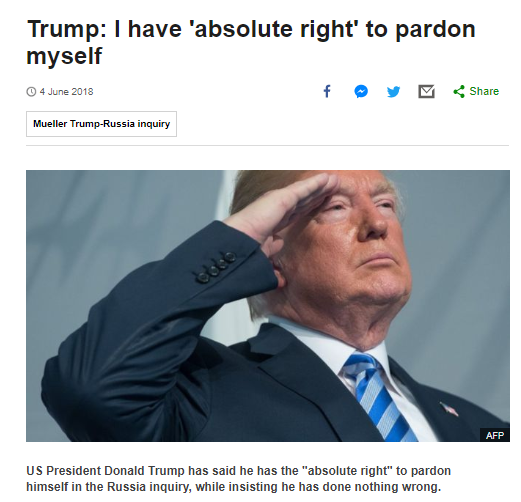 "When they are...given control over their own actions, receive the returns from their own labor, and released from bondage of the mind so that ignorance & superstition are replaced by education & moral influences, the most progress is made toward enlightened civilization." 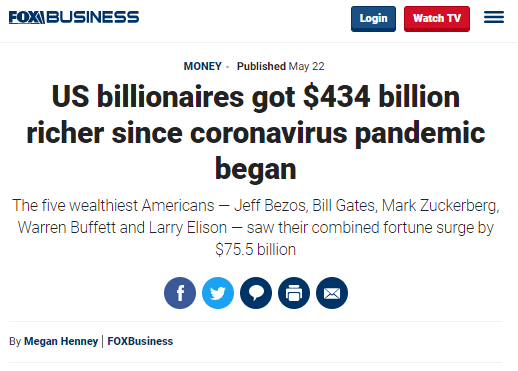 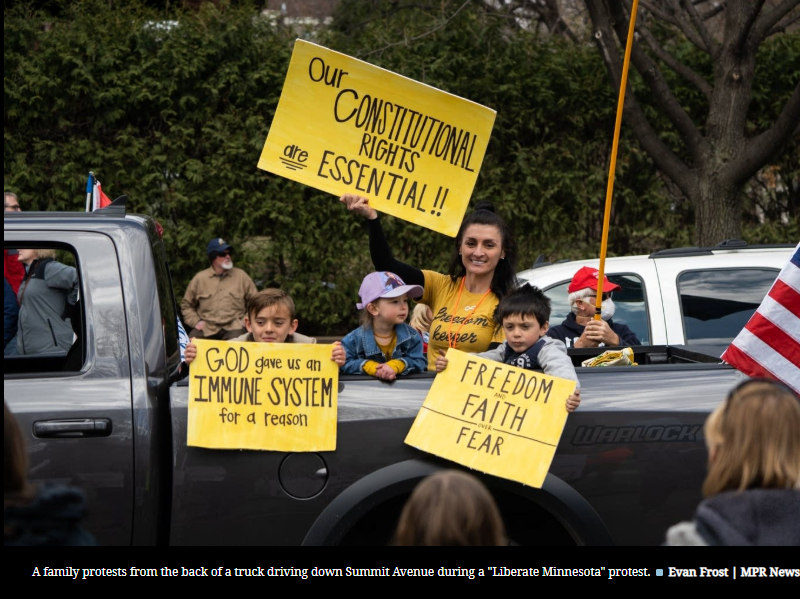 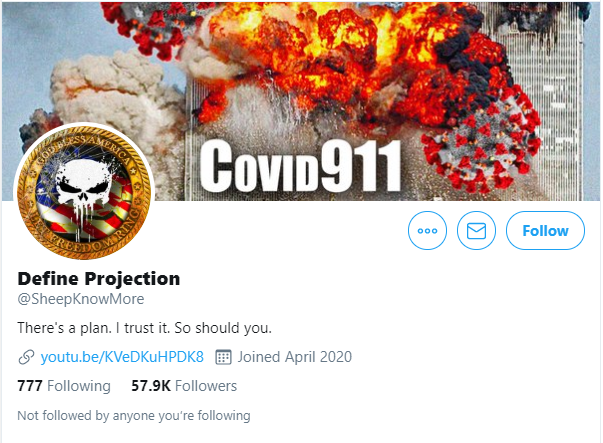 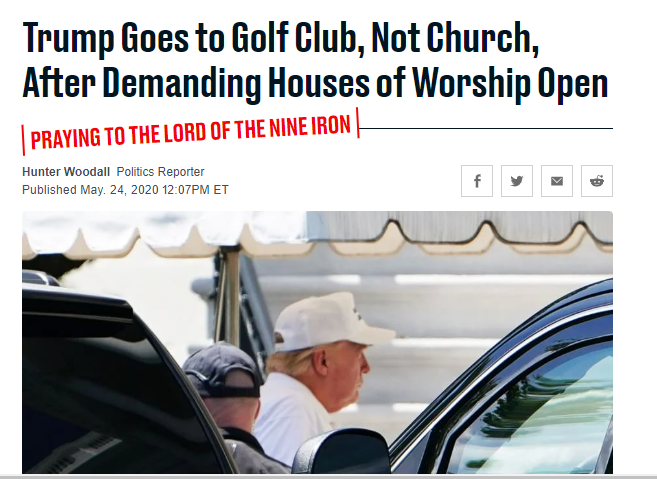 "...the bitterness, hatred, and sectional animosities that it left in its wake. For many years, both for the North and for the South, these were unfortunately stimulated and kept alive for the political advantage that the sponsors of such action hoped to secure." 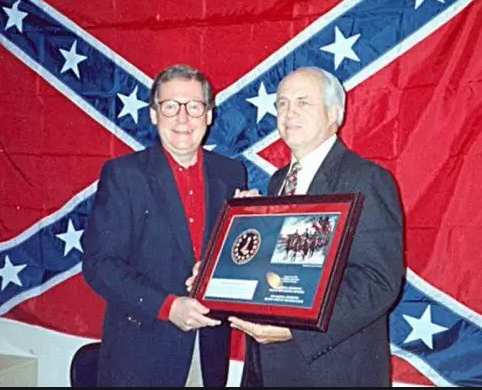 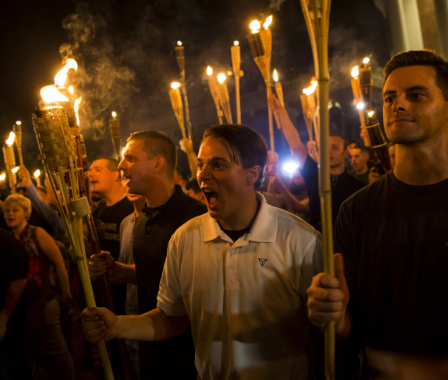 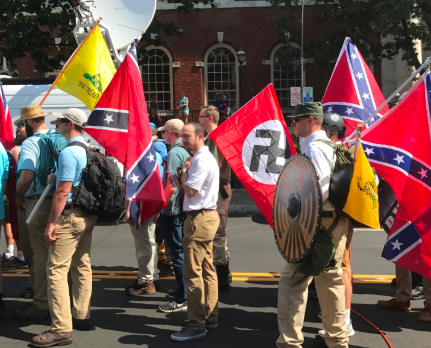 "The time has long since passed when to hold or express such hostile sentiments should ever be permitted to work to the advantage of anyone. Those who resort to them should find that their standing in the public confidence is thereby seriously impaired." 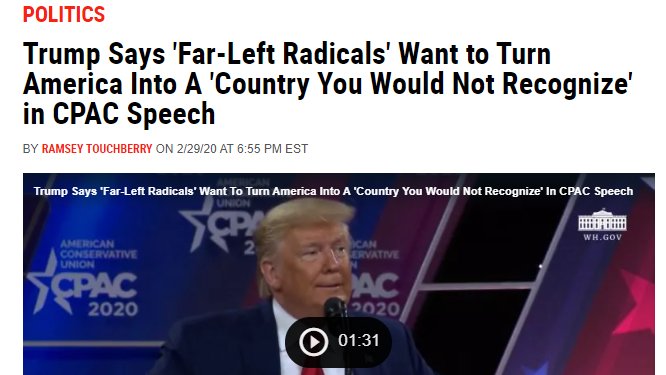 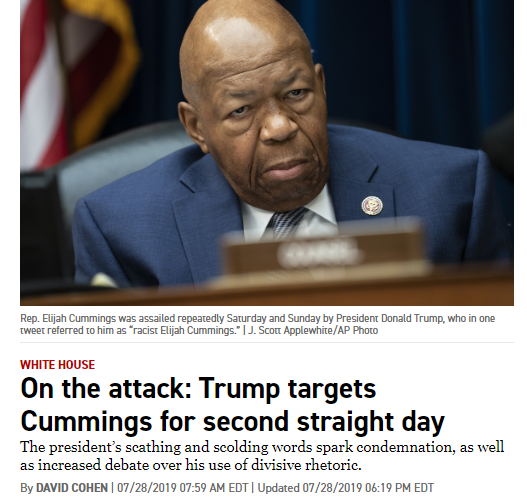 "Extremism has no religious affiliation. What extremists share is a loathing of our liberty and our diversity. They look to a distant historical vision of ‘us’ against ‘them’. But as President Obama recently said, ultimately, there is no ‘us’ and ‘them’. There is just ‘us’." 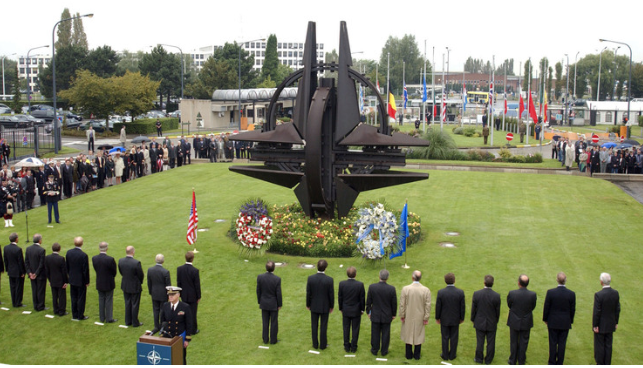 You can follow @sisu_sanity.
Tip: mention @twtextapp on a Twitter thread with the keyword “unroll” to get a link to it.