Read on Twitter
DEMO-2 GUIDE: events to clap for

here’s an overview of key events you should watch for during launch and ascent! DM-2 is the last demonstration flight for SpaceX, and it’s first crewed flight. 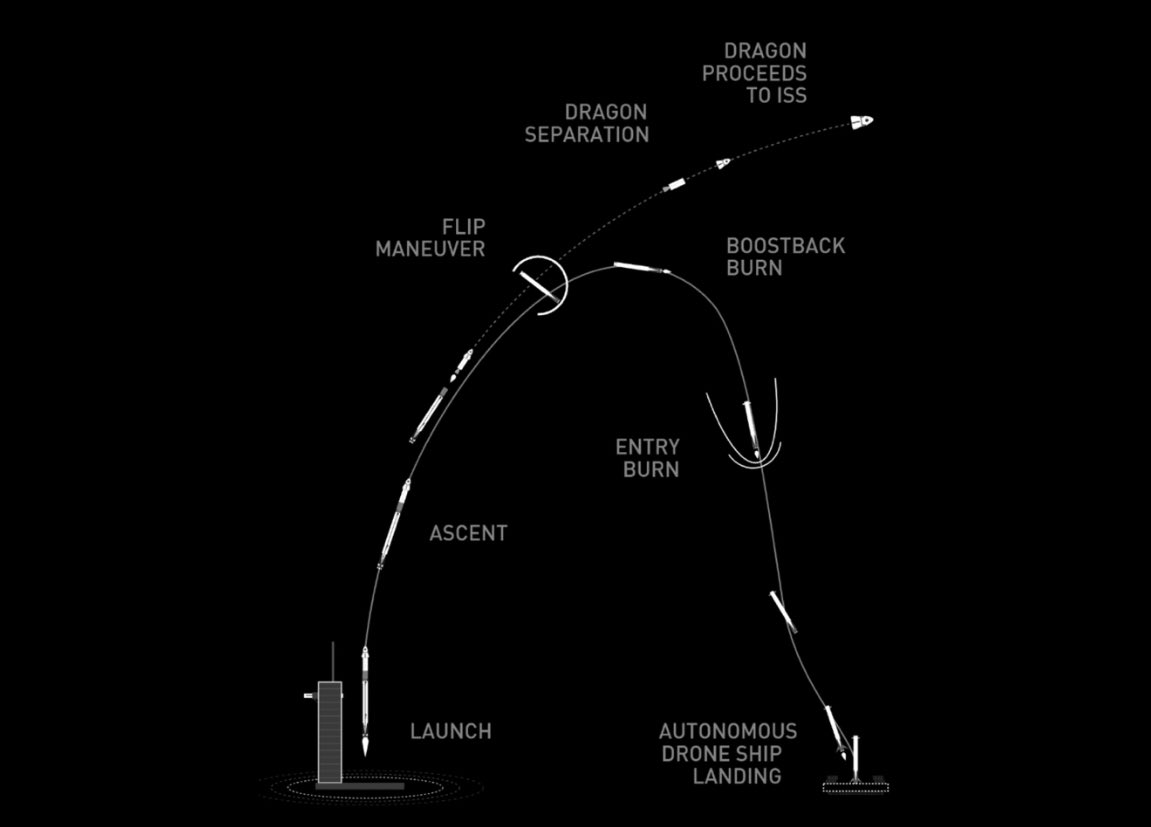 Usually i would hope to be watching from mission control or Cape, but facetime with friends is the next best thing! the energy on live-streams ( http://spacex.com ) is also infectious

http://spacex.com
DM-2, or Demonstration mission 2, is the second one in the series of demonstration flights for NASA to approve SpaceX as a launch provider for its astronauts. Doug Hurley and Bob Behnken will be riding in the Crew Dragon, on top a Falcon 9

As far ahead as in the 2 days leading up to launch (T- 45:00), propellant load, engine cool, and checkouts are done. These are important checkouts to complete so the ops team can stop the launch at any time due to technical problems or weather (also know as scrub)
T+ 00:58 MAX Q

Shortly after launch, the vehicle experiences what is known as maximum dynamical pressure (q), or the maximum mechanical stress on the rocket. This is a checkpoint for a job well-done for structures & mechanisms!
T+ 02:33 MECO

1st stage Main Engine CutOff is the shut down of the 9 Merlin engines on the first stage of Falcon 9. The timing of this is really important!
T+ 02:36 Stage separation

The first and second stages separate in order to return the first stage back to Earth to land on the autonomous drone ship.
T+ 02:44 2nd engine start

This is one I always hold my breath for. Shortly after separation, the Merlin vacuum (MVac) engine for the second stage ignites and this is one that gets a lot of cheers from the team!
T+ 07:15 Reentry burn

Meanwhile, the first stage is on its way back after rotation around so its engine side is pointed toward Earth. This short reentry burn is to slow down the vehicle, and it’ll burn again when it reaches the drone ship.
T+ 08:47 SECO

Second stage Engine CutOff is completed around the same time, in order to prepare for Dragon to continue its journey to the ISS.
T+ 08:52 Landing burn

The cameras usually cut off at this point, and there’s a moment of suspense before we find out if the rocket landed or not.
T+ 12:00 Dragon separation

Dragon separates from the second stage (which is discarded, not recovered), and continues it’s journey to the ISS. Shortly after, the nosecone opening sequence starts, which is important for docking.
Dragon will perform orbit activation and environmental checkouts, followed by a series of orbit raising maneuvers to catch up with the ISS. Once close, Dragon will approach and dock with the ISS. Docking is approximately 19 hours after launch (and will be my fav part)
Bob and Doug stay on the station anywhere from 30-119 days. The long time period is variable to reentry conditions and weather.
Once the mission is complete, Dragon unlocks, jettison (discards) the trunk, and completes its deorbit burn, which lasts about 12 min. It will enter the Earth’s atmosphere, which is one of the bumpiest parts of the ride. Finally, splashdown will just be off FL’s coast!!
Hopefully this gave you an insight into key events of the launch and makes you excited to follow along! You can watch the livestream next Wed on SpaceX’s website. Ad astra!!

You can follow @MichTheMartian.
Tip: mention @twtextapp on a Twitter thread with the keyword “unroll” to get a link to it.