Read on Twitter
In Nov 2013, Business Daily wrote about how The House of Ichaweri was going through an expansion drive.

They listed a whole host of businesses with David Ndii layering more on his article about Crony Capitalism.

Uhuru Kenyatta’s assumption of the presidency has injected fresh energy into his family’s commercial empire, putting a number of its units on an expansion mode that is expected to consolidate its

https://www.businessdailyafrica.com/corporate/Kenyatta-business-empire-goes-into-expansion-drive/539550-2069704-liwltz/index.html
The CIA had quite a bit to say back in September 1978 in a report titled "The Royal Family Jewels"

3/
According to the report, The House already owned hundreds and thousands of acres as well as interests in coffee plantations and ruby mines.

4/
On the ruby mines angle, the Washington Post in 1987 had the story of a 1974 grand ripoff involving the first lady and two American miners, John Saul and Eliot White Miller, working ruby mines in Tsavo West

5/
This story has an interesting tie-in to a certain former senator and how Greg Criticos who brought the matter to The House.

"The mines had also got the attention of Beth Mugo, the wife of Kenya’s Ambassador to Ethiopia."

This one's a good read

Four years later, in 1978, Kenyatta died and Saul resurfaced to lay claim to his ruby mines.

https://www.nation.co.ke/oped/opinion/How-fallout-between-two-American-friends-gifted-Muthama-/440808-2993912-7i0w10/index.html
6/
But it wasn't just rubies that were leaving the Tsavo.

The New Scientist in 1975 reported that 10K-20K elephants were being slaughtered in Kenya, with the trade bringing in $10mn a year. The publication also made reference to a couple of "Ivory Queens"
https://books.google.co.ke/books?id=zE74f2fU1iwC&pg=PA452&lpg=PA452&dq=mama+ngina+kenyatta+poaching+elephants+new+scientist&source=bl&ots=VepBJq0l9y&sig=ACfU3U307oHHwGUOsPW_SJ-b7RLRO55eDQ&hl=en&sa=X&ved=2ahUKEwjYuZbW17_pAhUCu3EKHTMgB6sQ6AEwBXoECBQQAQ#v=onepage&q=mama%20ngina%20kenyatta%20poaching%20elephants%20new%20scientist&f=false

7/
At the time, the Game Dept (now KWS) was involved in the slaughter

In 1973 and 1974, according to The Sunday Times, the Game Department “expended heavy ammunition at such a rate that it was forced to scour the Nairobi gunsmiths for fresh supplies.” https://www.nytimes.com/1975/09/22/archives/elephants-are-declining-rapidly-in-africa-african-elephants.html
Elephants Are Declining Rapidly in Africa https://www.nytimes.com/1975/09/22/archives/elephants-are-declining-rapidly-in-africa-african-elephants.html
8/
The CIA also mentions involvement in charcoal as well as the holding of an export license for 1,250 baby elephant tusks by our aforementioned queens.

One of the companies owned by a member of the The House was Inchcape, owned by Peter Muigai Kenyatta and which held the Ford concession in Kenya.

Not sure if it's the same Inchcape that now owns the BMW franchise in Kenya
https://www.businessdailyafrica.com/corporate/companies/Dealer-showroom-for-BMW-in-Nairobi/4003102-5033044-48w9oi/index.html

9/
Onto land now, and the TJRC Report appears to have some insights

It says Kenyatta personally approved the purchase of large farms by his family in the Rift Valley, exempting the transactions from review by the respective land control boards. https://www.nation.co.ke/news/politics/Kenyatta-led-elite-in-land-grabbing-/1064-1859262-7fe9vsz/index.html
Kenyatta led elite in land grabbing

The regime of Kenya’s first president, Jomo Kenyatta, was riddled with land grabbing which was perpetrated by him for his benefit and members of his family.

https://www.nation.co.ke/news/politics/Kenyatta-led-elite-in-land-grabbing-/1064-1859262-7fe9vsz/index.html
10/
Wikileaks has a list of land holdings in acres:

https://file.wikileaks.org/file/kenya-who-owns-the-land.pdf
11/
Amongst these holdings is Gicheha ranch in Naivasha, a favourite of Uhuru Kenyatta.

The more than 4,000-acre Gicheha Farm hosts some 1,000 animals, a majority of them imported from South Africa. 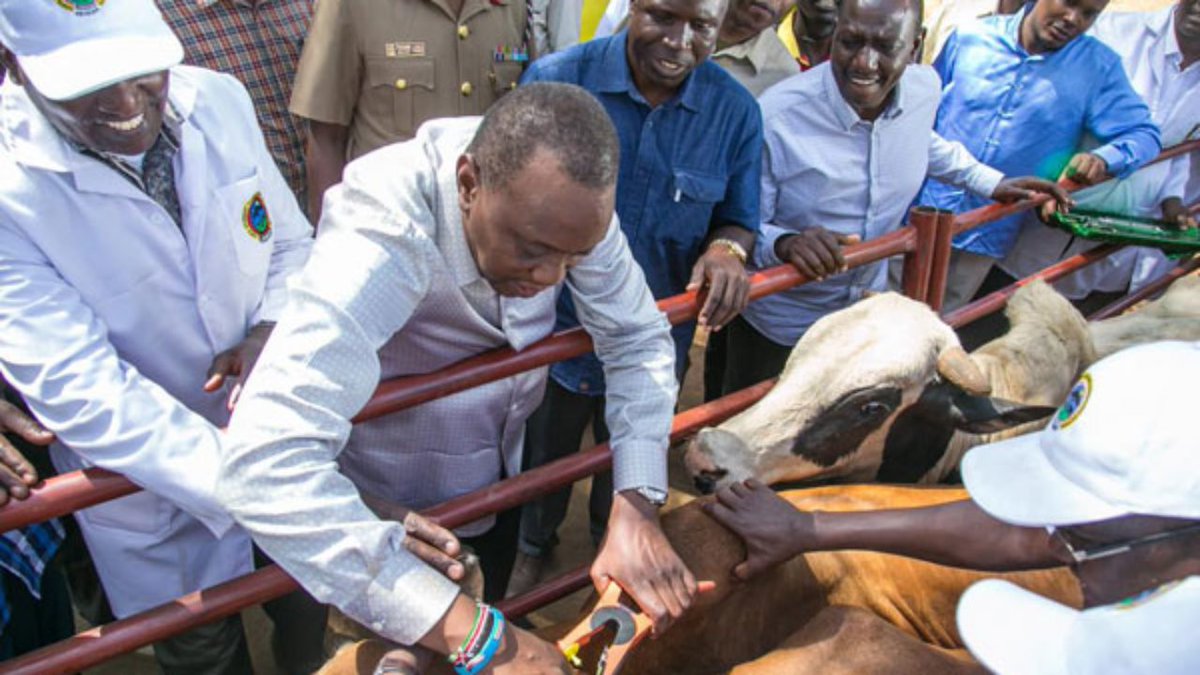 “We only grow our orchids on three acres, but that still makes us the largest commercial orchid growers in all of East and Central Africa,” Nyokabi added. https://www.businessdailyafrica.com/lifestyle/society/A-show-for-flower-lovers/3405664-4107398-u354u8/index.html
A show for flower lovers

French food group Danone said Friday it was buying a 40 per cent stake in Brookside in a deal with the Kenyatta family whose terms remain secret.

https://www.businessdailyafrica.com/corporate/539550-2388592-rn98bxz/index.html
15/
In banking, The House owns a piece of NCBA, which aside from being a custodian bank for MPesa is also one of the founders the lovely Stawi Mobile Lending app

The Kenyattas control about 13.2 percent of the new entity, a level of ownership that slightly surpasses the 11.75 percent stake that the family of the late Phillip Ndegwa.

Rumours of a sale remain unconfirmed 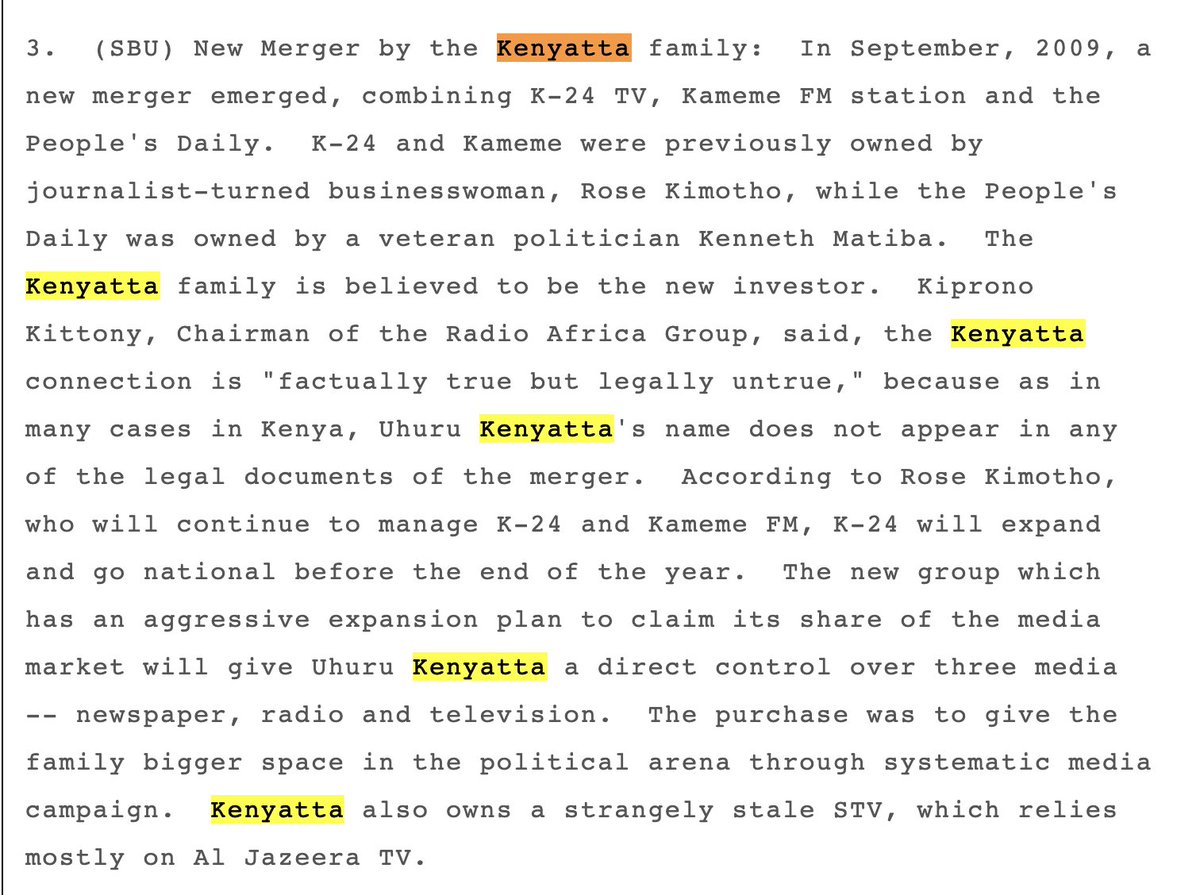 17/
Then there are the linkages to Rai and Timsales

The billionaire Rai family has bought the collapsed PanPaper Mills for Sh900 million, paving the way for reopening of the factory that closed shop in 2009.

https://www.businessdailyafrica.com/news/Billionaire-Rai-family-buys-PanPaper-for-Sh900m/539546-3180826-o7k6uxz/index.html
18/
David Ndii also lists a number of companies on his article on Crony Capitalism including:

https://www.kotohousingkenya.co.ke/pages/policehousing.html
19/
All these family jewels are however dwarfed by the sheer size and audacity of Northlands City, which aims to build a residential, agricultural and industrial metropolis on The House's land near Ruiru. https://twitter.com/surambaya/status/1262315644168671233