Read on Twitter
Alright, beautiful people: have been waiting for this for a minute. I’m really excited to share some new research, just posted (open access) at ERL ( @iopenvironment): https://iopscience.iop.org/article/10.1088/1748-9326/ab9335

Let’s talk about the climate impacts of renewable natural gas (RNG).
Waiting for this piece to go through peer review while watching some of the really interesting discourse on RNG recently
(e.g., https://www.vox.com/energy-and-environment/2020/2/14/21131109/california-natural-gas-renewable-socalgas by @drvox,
https://www.latimes.com/environment/story/2020-04-09/cow-poop-california-clean-energy-future by @Sammy_Roth) has been REALLY hard.
Cow poop could fuel California's clean energy future. But not everyone's on board

https://www.vox.com/energy-and-environment/2020/2/14/21131109/california-natural-gas-renewable-socalgas
But I can now tell you more formally why I have some pretty serious concerns about moving toward an RNG future.

At scale, most RNG is likely to come from intentionally produced methane (even if it’s produced from waste).

We know these systems will leak.
Arg 2:
Even if the methane is truly waste, I’m skeptical of “negative emissions.”

If you can capture waste methane + care about climate, the alternative is flaring, not venting.

So waste methane-based RNG systems need to leak less than flares (~1%) to even be GHG neutral.
Overall point: RNG might yet be useful. There are some clear reasons to want it.

I assert that committing to RNG means committing to additional GHG emissions lock-in that needs to be considered as we decide how to invest.
Still interested?

Join me for a too-long, detailed thread. And bring your counterarguments—I’m interested to hear!
Let’s set the stage. Why is RNG interesting?
*we use lots of natural gas (basically: methane)
*we have lots of natural gas infrastructure
*we want to decarbonize
*methane can be renewable, or we can make it out of renewable feedstocks...
So!
*maybe we can use renewable methane to make RNG + keep a lot of our existing infrastructure
*also a renewable direct substitute for fossil natural gas (FNG) (a “drop in fuel”) could help oodles w/ some grid challenges ( https://www.sciencedirect.com/science/article/pii/S0306261920303366)
How do non-carbon priorities affect zero-carbon electricity systems? A case study of freshwater...

In both cases the idea is that the combustion product (CO2) is climate neutral bc it either came from the air via photosynthesis or you captured it from somewhere.
In case 1: the idea is that destroying biogenic methane can be highly GHG negative, because you’re turning methane (potent GHG) into biogenic CO2 (neutral GHG).

In case 2: start with climate neutral CO2, end with climate neutral CO2, so GHG intensity is 0.
To start with case 2, because it’s a lot more straightforward, the big issue is that any methane leakage is clearly GHG intensive. The best you can do (assuming 0 embodied GHGs into the system) is GHG neutral. And it’s unrealistic to think the system won’t leak. 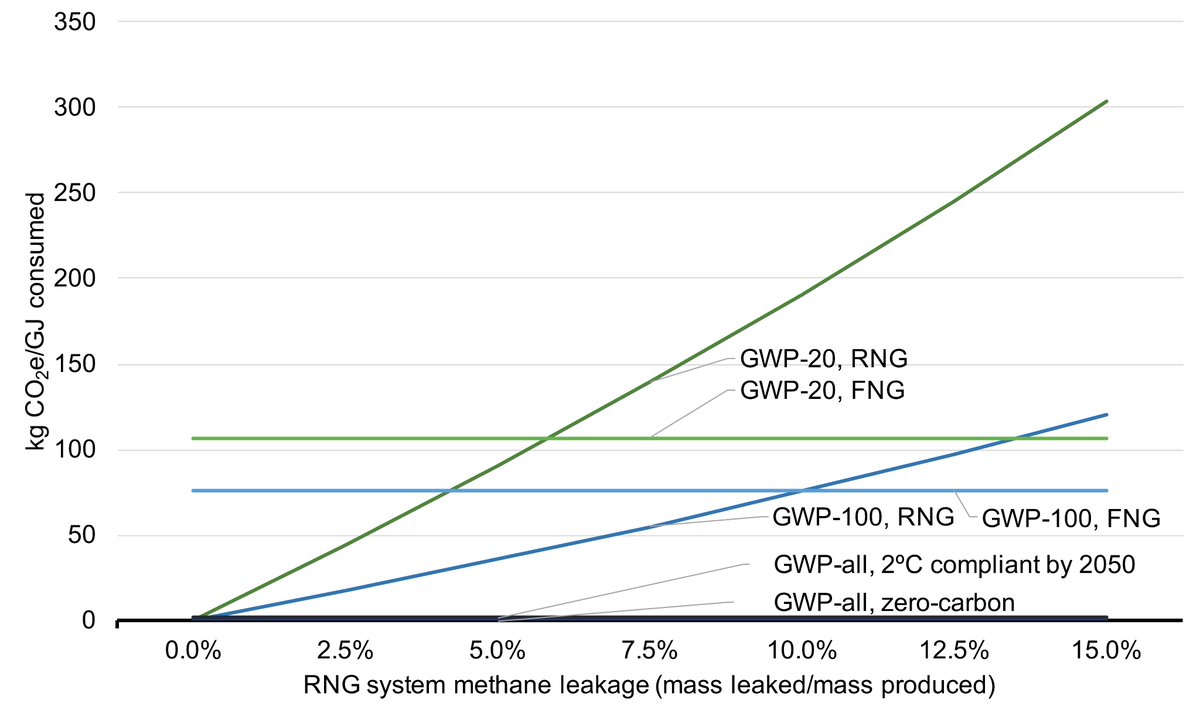 We don’t have data on a mature power-to-gas RNG system, but we know fossil gas systems (the ones whose pipelines + appliances we might wish to repurpose) leak methane ( https://science.sciencemag.org/content/361/6398/186), and so do mature biogas systems ( https://www.sciencedirect.com/science/article/pii/S0956053X19304842).
Total methane emission rates and losses from 23 biogas plants

Methane losses from biogas plants are problematic, since they contribute to global warming and thus reduce the environmental benefits of biogas produc…

https://science.sciencemag.org/content/361/6398/186
Point being: it’s not plausible to me that power-to-gas will achieve 0 GHG. That’s a relevant fact when we consider how to mobilize capital during decarbonization – this isn’t a free transition from fossil gas.
Things get a little more interesting with biogas. I think there are 2 reasons that the notion of a negative GHG RNG system is flawed.
Problem 1: as the system gets bigger / as there become more incentives to make RNG, the likelihood that the methane is actually waste goes down.

E.g: You can adjust conditions at the wastewater treatment plant to make more methane if there’s an incentive.
As I note in my paper: this is not only possible but observed.

The national greenhouse gas inventory is developed each year to track trends in U.S. emissions and removals. Find emissions by source, economic sector and greenhouse gas.

https://www.epa.gov/ghgemissions/inventory-us-greenhouse-gas-emissions-and-sinks
In any case, I challenge the assumption that even truly waste methane that is capturable for use in an RNG system is GHG negative.

The issue is the counterfactual: Problem 2.
To make waste methane into RNG, you have to catch it first. From some systems, that’s feasible (e.g., from a wastewater treatment plant), and from others, it’s not really (e.g., directly from cattle or giant open rice paddies).
I argue that if you assume the policy context promotes low GHG energy resources, which I think you need to assume if RNG is seriously on the table, any of the waste methane you can catch will be
a) used or
b) flared.
NOT
a) used or
b) vented.
That is: I don’t think it’s reasonable to estimate GHG emissions from waste methane-based RNG systems (which again, I think would be a relatively small fraction of total RNG anyway) based on the assumption that the methane would otherwise make it to the atmosphere.
So, given that flares are ~order 99% efficient in converting (read: burning) methane to CO2, the actual comparison is whether the RNG system leaks less than the likely alternative management strategy—the flare.
As I noted above: assuming <1% total system leakage is...optimistic.
So, point being: we’re not really looking at a system like this, where some RNG is *so* GHG negative that you’re willing to put up with some GHG positive RNG: 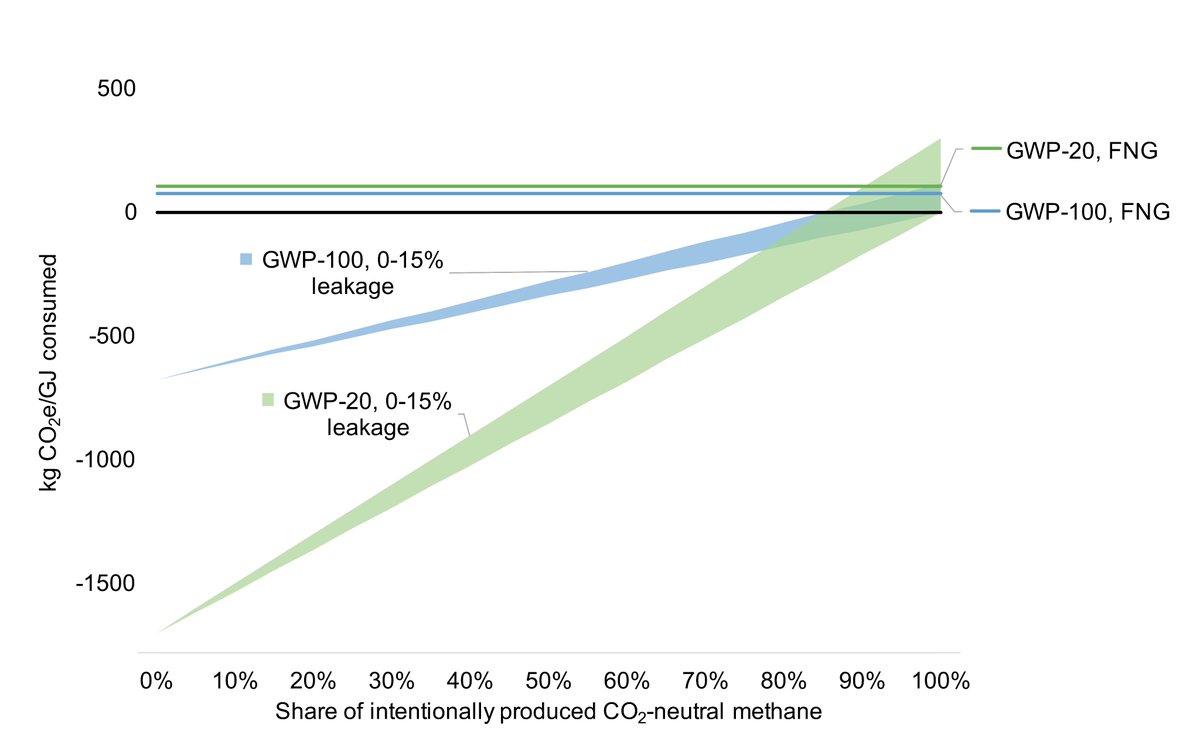 We’re looking at a system like this, where you have to have both 1) a genuinely waste methane feedstock and 2) leakage rates less than those of flares to be GHG negative. 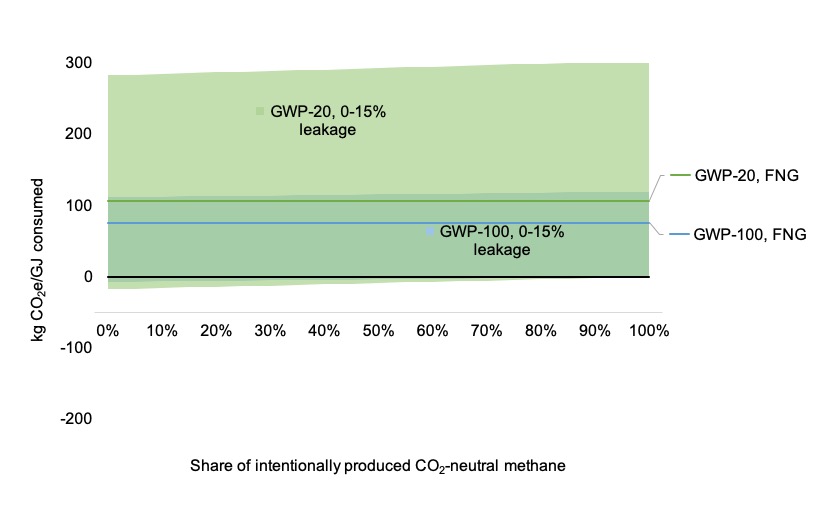 Those figures show observed ranges for leakage from biogas systems and GHG intensity for fossil gas systems (incl leakage) for reference. 15% is certainly on the high side for biogas but has been observed.
In conclusion:
*RNG could be useful for the grid, for creating revenue for particular types of wastes (stranded midday electricity, wastewater sludge, etc.) – those are real benefits
*but: it’s very unlikely, in my view, to even achieve GHG neutrality. It especially should not be seen as a way to keep all our FNG infrastructure with big GHG benefits.

Looking forward to discussion!
You can follow @emilygrubert.
Tip: mention @twtextapp on a Twitter thread with the keyword “unroll” to get a link to it.