Read on Twitter
1. I think there is something going on. Flynn Manafort and Cohen cases all with movement. Add to that the SDNY Turkish state bank case has some movement and I just think there may be some relationship. I start with my initial analysis of Flynn's conduct that had less to do
2. Kislyak and more to do with illegally selling nuclear tech to Mid East states. When he was intercepted violating Logan Act FBI had a way to get him out without compromising that investigation.

Trump is panicked. He wants scalps. Barr continues to deliver shinny objects but
3. nothing big. Trump may be getting impatient with Barr to bring him something he can leverage in the campaign. So Barr & Trump's ODNI director plant are now going to out the NSA & CIA officers who were involved in the Flynn intercept unmasking. That's a federal crime IMO. #PIIA
4. A bit of context. On January 26, 2017 acting AG Sally Yates went to the White House to tip the Trump administration off to Flynn's lie to the @FBIWFO and Pence. McGahn did not seem to care much about the lies other than to ask Yates to return on the next day and bring the
5. Flynn intercept. The document dump of transcripts included Sally Yates. It appears clear to me now that she never returned with the intercept but told McGahn she needed to coordinate it with the FBI. The next day the White House rolled out its first Muslim travel ban & Yates
6. was gone a day or so later. Did Trump/Putin ever get the intercept? Is that why he's trying to out the officers who were involved?

IMO Trump will betray us to our most dangerous foe. He will destroy our intelligence services for his own personal gain but
7. that personal gain is consistent with the goals of our enemy that has co-opted Trump as their asset. So I conclude someone is driving Trump towards destroying our IC. I've believed since March 2017, Trump has a communication device, likely in the residence, to reach Putin.
8. I believe it is more likely that the orders are coming from the Kremlin via that device. I've posted the FOIA materials that show the licence he gave the FSB for what I believe is a NSA proof cryptographic system. That is his Bat Phone from Putin.
9. I remember something I learned when my late brother investigated Bush41 and Reagan. Two areas have the highest level of secrecy: Nukes and NOCS. John was tasked to investigate both and one of the targets was certainly Barr. Also Cipollone and Shea would have been likely
10. targets. Trump is acting like an enemy agent. The movement could be his move to begin his coup to end our Democracy. It could also be the system about to vomit out the truth about Trump and his betrayal. It could be both. But something is up IMO.
11. I think Rand Paul just confirmed by suspicious going back to early 2017. Trump and Flynn were selling nukes illegally. Here is the list of the unmasked people who got the information on Flynn intercept. Turkey and Nukes. Thanks for playing @RandPaul. 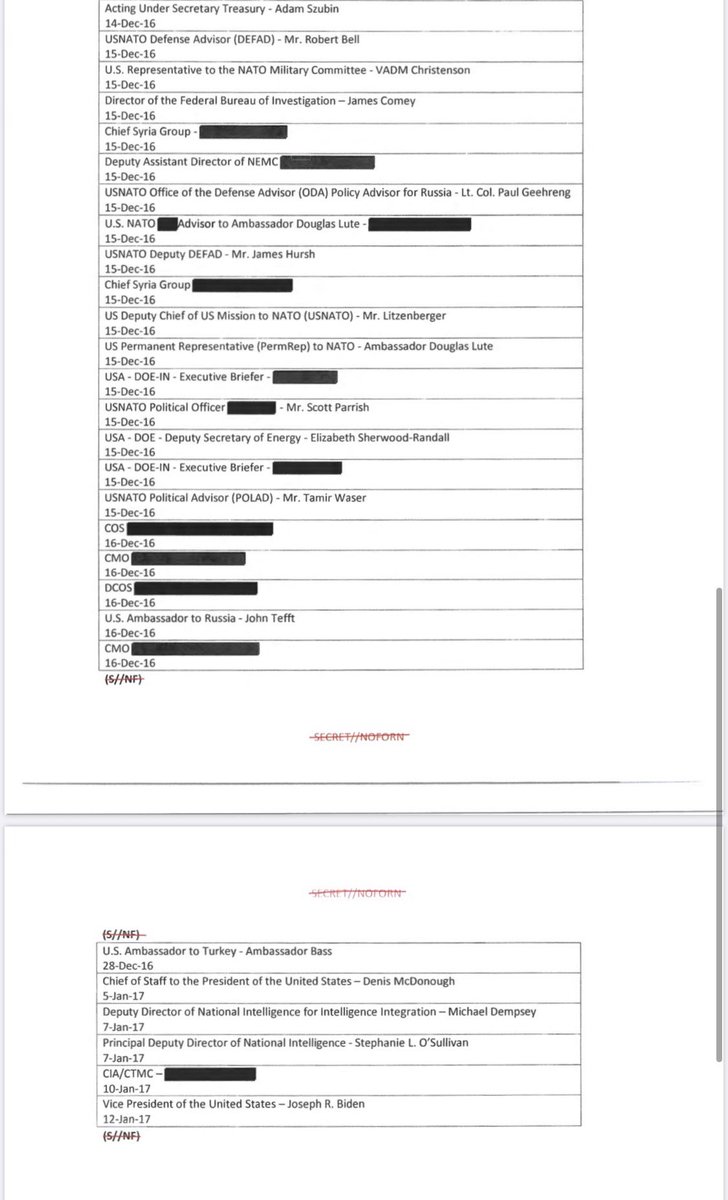 12. Why would @JoeBiden be on this list (cut off on this copy)? Because @BarackObama ditched Erdogan on him. This list has a proliferation expert, Turkey's Amb and Biden. Circumstantial proof the underlying conduct was nuclear proliferation to Flynn's admitted principal, Turkey.
13. I want to extend my thanks to the SVR's dumbest asset, @SenateGOP @RandPaul. But he should probably stay on the ground floor for now. And definitely don't drink the tea.

14. Another thought. I have considered the hot intercept to be the Flynn's call that prompted the FBI to interview him on January 24. But the list is either from the December 5 or 6 call or another later intercept. This is was my missing piece. Paul just exposed Flynn and
15. possibly Trump were under a proliferation National Security investigation as I had surmised in 2017. And now the witnesses are going into the wild. Manafort and Flynn are both at risk of assassination by FSB and/or MIT. Paul will likely just see his Kompromat leaking.
16. Trump's connection to Flynn's proliferation crimes with Turkey was likely just confirmed by @RandPaul. Trump is now rushing his advance teams to Allentown, 17 miles from Fetulah Gulen. I'm sure it's just a coincidence. @SecretService @FBIPhiladelphia @FBIWFO @RepAdamSchiff
17. On the great #ObamaGate #Flynn unmasking, NB it appears from the first page of the declassified list that the people who requested to know Flynn's identity didn't know who the NSA had intercepted. Likely only something like "USPerson#3." That's how #FISA works. @JoeBiden 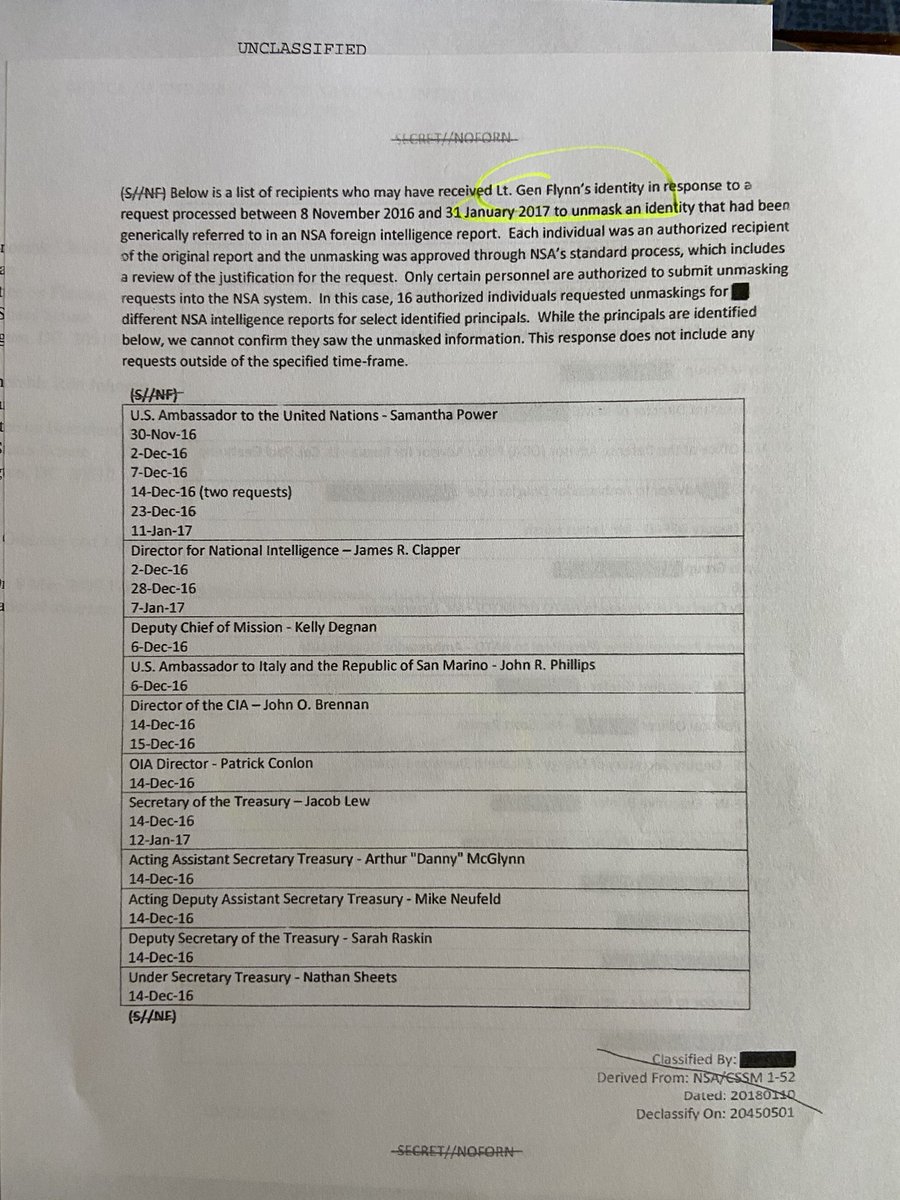 18. By releasing this that gives the Russians a ton of free intel, they are likely popping Champaign at the GRU, SVR and FSB. Trump, Barr and @ODNI Grinnell are filthy degenerate traitors and I will work to see them in prison. @FBIWFO @TheJusticeDept
19. So it's possible that the IC, knowing that the Kremlin mole running @ODNIgov would be stupid enough to expose the Flynn unmasking requests, prepared the ground to expose Trump's terrorist connections. Nice work Grinnell. That should get you extras smokes in Florence. @FBIWFO
You can follow @TimInHonolulu.
Tip: mention @twtextapp on a Twitter thread with the keyword “unroll” to get a link to it.