Read on Twitter
And hold on, how come these rows haven’t really happened before? How has it taken until 2020 for VE-Day to be decried as nationalistic excess?

But had a lukewarm reception from Thatcher. /13
27 November 1984: Parliamentary Under-Secretary of State stated, "we have no present plans for any official British celebration of this anniversary."

Anyway the Soviets decided to have a big bash to commemorate the Great Patriotic War and the Brits… were going to sweet FA. /14
The SDP kept pushing.

On 12 Jan 1985 it was reported that, Baroness Young (Deputy Foreign Secretary) thought, "An invitation confined to the wartime allies would have to exclude West Germany, Japan and possibly Italy as well as Bulgaria, Finland, Romania and Hungary…’ /15
and such a celebration ‘would hardly do justice to the realities of present-day politics and our flourishing postwar partnership with Germany, Italy and Japan.’

So the decision to not go big for the 40th was, in part, because it’d potentially upset modern strategic allies. /16
So one SDP boi, John Cartwright MP for Woolwich, decides to engage hard & the Minister for State responds to say the proposals were, ‘at best nostalgic and at worst anti-German’

This is where you need to pay attention.

As pretty much everything comes back to him. /17
Cartwright responded in Parliament on 28 January 1985 to chide.

Cartwright’s words and thoughts are clearly hugely bloody influential when we look forward to 1995. 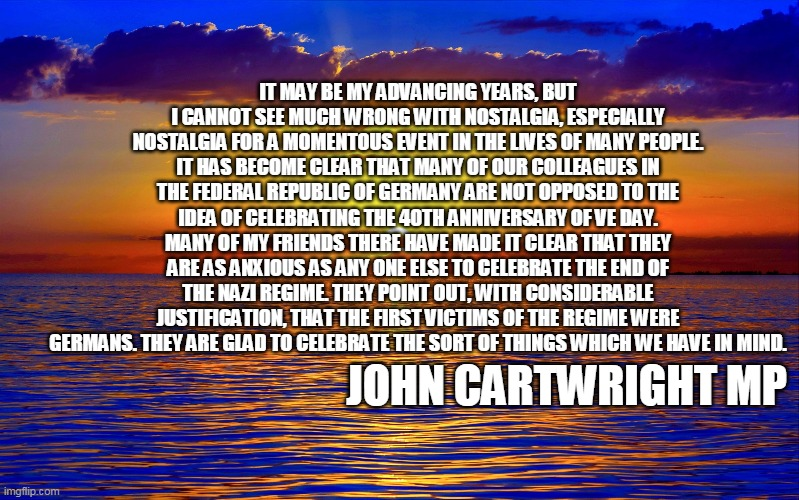 A rough summary...
Pay tribute to those who gave their lives & emphasise reconciliation, celebrate 40 years of peace in Europe giving 'thanks for the new Europe which emerged... and in which nations which were for generations at each other’s throats and are now close allies.' /19
'All those matters are worth celebrating.’

VJ-Day was not to be forgotten but unsure whether to simple combine the two celebrations or have 'simple, separate and wholly appropriate celebration at the appropriate time.' /20
'We must not give the impression that everything finished with the war in Europe and overlook the contribution of our countrymen who fought in the far east.’

Pretty clear so far. /21
Then we have the meat.

‘Celebrations and commemorations’, note the different phrasing, were to be ‘the broadest possible’ UK wide, and ‘genuinely international in character and involve both our former enemies and allies.’

In short. He wants both & internationalist in tone. /22
‘Ordinary people’ should be heavily involved as families ‘bore the brunt of the war’ and made huge sacrifices. Thus to limit events just to national leaders and ‘the great and good’ was wrong.

Veterans should also participate. /23
Young people to be a focal point, 'they have benefited from the peace, and our future depends on them.'

You may notice a theme forming here.

Things feel strangely familiar. /24
Celebrations were not to just be focused around Westminster Abbey or the Cenotaph, nor should London dominate, local events would underpin the endeavour to make clear ‘the contributions of all communities, towns and villages, to the war effort.’

Core aspect. Commemoration doesn't have to be solemn and serious. /26
Street parties formed Cartright’s ‘abiding recollection of VE Day’ was street parties and already ‘part of our folklore. We tend to do it on great occasions, such as coronations and jubilees.’ /27
As such the 40th was seen as another suitable moment & his postbag was already full of community plans to commemorate such events.

So... appears a lot of grass roots schemes had already pushed street parties (and local church services) up the agenda.

Sounds devolved to me! /28
So grass roots involvement was key, somewhat decentralised and community led.

Western Germany (and ideally Eastern) were to be involved and reconciliation pushed. Americans would also feature, and “Commonwealth nations should also have the opportunity to take part.” /29
The Soviet Union was to be involved ideally beyond ambassadorial attendance. Lord Carrington had written to Martin Dent of the University of Keele on 12 December pushing the angle of an international celebration, aiming for a more constructive relationship with the USSR. /30
Crucially the 40th ‘should certainly not be a half-hearted operation. It really should be in keeping with the momentous impact [of the war] and the personal sacrifice that was demanded.’ /31
So the core aims for the proposed 40th in 1985 are internationalist, community-led, ideally not a London-centric approach, and warm celebration underpinning solemn commemoration, anchored around reconciliation. /32
Ultimately the Government wasn’t really sold on the idea. /33
John Lee was sympathetic but didn’t move much.

He did state that it easy easy for following generations to forget the 'tyranny, the inhumanity, the bloodshed, the destruction and the suffering of the conflict...' /34
'as it is to be unaware of the fortitude, the courage and the bravery demonstrated by our forces and civilians and by those of our allies... The peace and freedom which we in the West enjoy was not won easily and must never be taken for granted.' /35
'We in this country have so much to be thankful for.'

I suspect this trend to anchor youth pays serious dividend for VE-Day campaigners moving forward. It's an easy box to tick and lobby on. /36
Baroness Young ultimately rejects official events, highlighting only inviting wartime Allies would alienate many & that such a celebration, ‘would hardly do justice to the realities of present-day politics and our flourishing postwar partnership with Germany, Italy and Japan.’/37
Of course this completely ignores Cartwright's internationalist/reconciliatory aims.

Thatcher dodges Europe in the process, but... there will be some fallout moving forward.

Instead of leading, we completely step back. 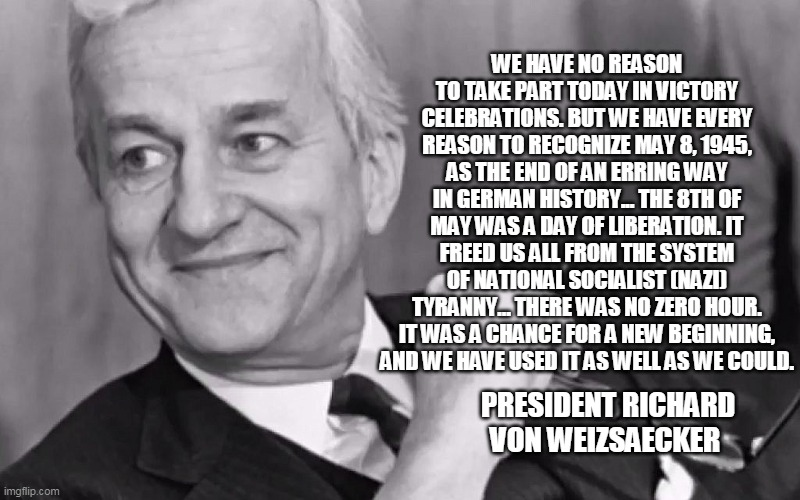 Britain embraced a limited London-centric approach with a service for 2kin Westminster Abbey. Robert Runcie commented on events that had occurred from Britain to Holland to Russia. /41 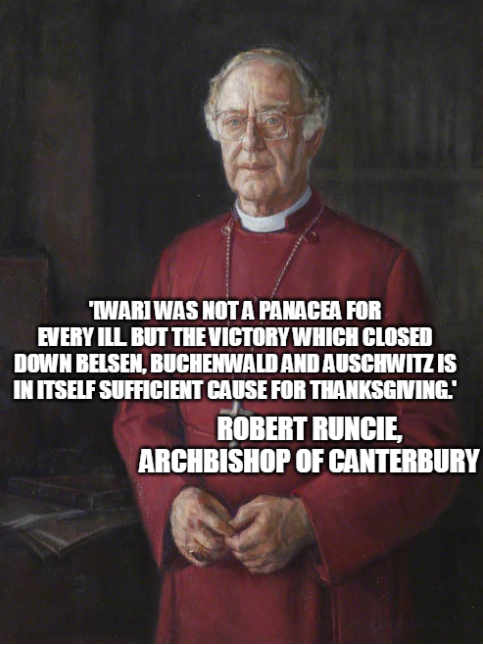 The service wasn’t a formal state occasion as Thatcher was 'concerned that the spirit of reconciliation with Germany must be uppermost in people’s minds.' /42
This left a void.

And it was filled.

Street parties kicked off across the country, and it’s pretty clear that what emerged was a rather community/regionally directed initiative rather than that encouraged by central government. /43
So that's worth bearing in mind.

One could argue the community acts for the 40th are a lil' bit of rebellion.

That something must be done. /44
Meanwhile the Soviets go ALL OUT in a mega-parade of steel.

Moscow Victory Day Parade is held on 9 May and has all the classic Soviet tropes, just with tons of classic armour.

Britain's failure is pretty marked and we yield the floor.

The ball kicked by Cartwright and co back in 1984 has long-gained traction, and the country engages in a massive series of events. /47
The last few years have been momentous, with the fall of the Berlin Wall and Soviet Union, Fukuyama’s ‘end of history’, German reunification, end of Thatcher etc, foundation of the EU.

Seismic geopolitical shifts across Europe and the world. /48
And in a small sidestep, which totally will not become a plot point 25 years later, the bank holiday is shifted from May Day to VE-Day. /49
VE-Day 50 sees Britain go big & seek to become the global focus for commemorations. /50 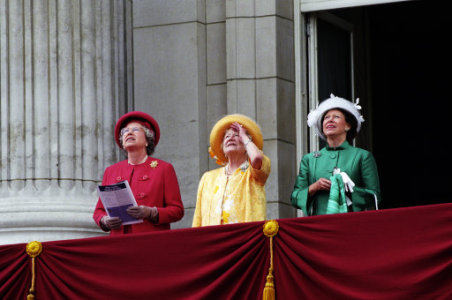 TBH I was probably most excited by another episode of Bucky O’Hare. /51

*God I hate that soap* 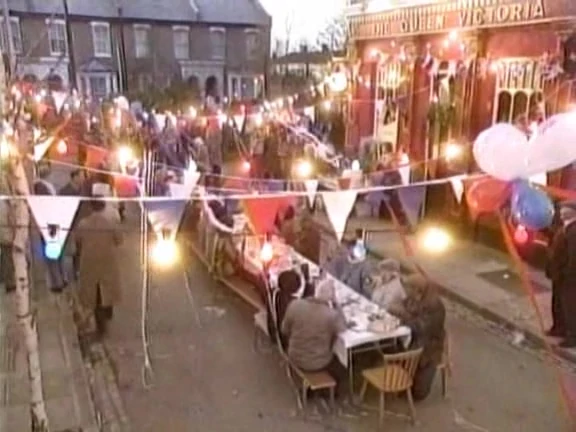 The entire day's schedule is effectively handed over to VE-Day, after all it's a Bank Holiday as they shifted the May Day bank holiday. 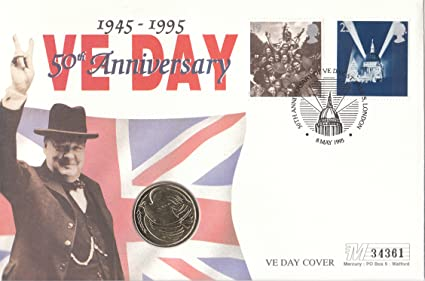 It was a massive affair; street parties across the country, a massive concert at Hyde Park, wartime speeches, flypasts over The Mall, appearances by Royals.

In doing so, the military side was comparatively muted as they chose to push the civilian side and reconciliation. /54
All of this should sound very, very familiar as it's the broad approach we've taken for the last 25 YEARS.

I mean seriously, they basically unwrap the plans every 5 years and scale up or scale down a bit. /55
What I find surprising is that it still remains bloody close to Cartwright's original vision.

The celebration/commemoration angle. The works.

Which you know, evolved from SDP proposals.

Remarkable really. /56
I'm not actually a massive fan of these sorts of commemorations, as we tend to reinforce tropes rather than challenge them, and new voices are more than muted.

Street parties are pretty cliche and a bit naff.

But culture and all that. /57
But people clearly love them, across all ages, and these events traditionally represent massive engagement opportunities for historians.

So let's not knock community angles/concerts too much - altho' most I think are damned naff.

'The biggest party London's put on for decades.'

One hell of a flypast. /62
I'm really excited for the latest episode of Due South.

French... bit militarisitic innit? /63
An hour of footage of Hyde Park and other events.

Notable that Hyde Park appears to end with Land of Hope and Glory and Auld Lang Syne. /65
Reconciliation, peace and progression features very, very heavily throughout the above.

Very, very similar to events proposed this year. /66
So with lockdown that all changes.

The massive amount of branding etc, really falls flat on it's face.

A huge public bank holiday becomes near-irrelevant when everyone is either isolating, working from home, and... unable to gather. /67 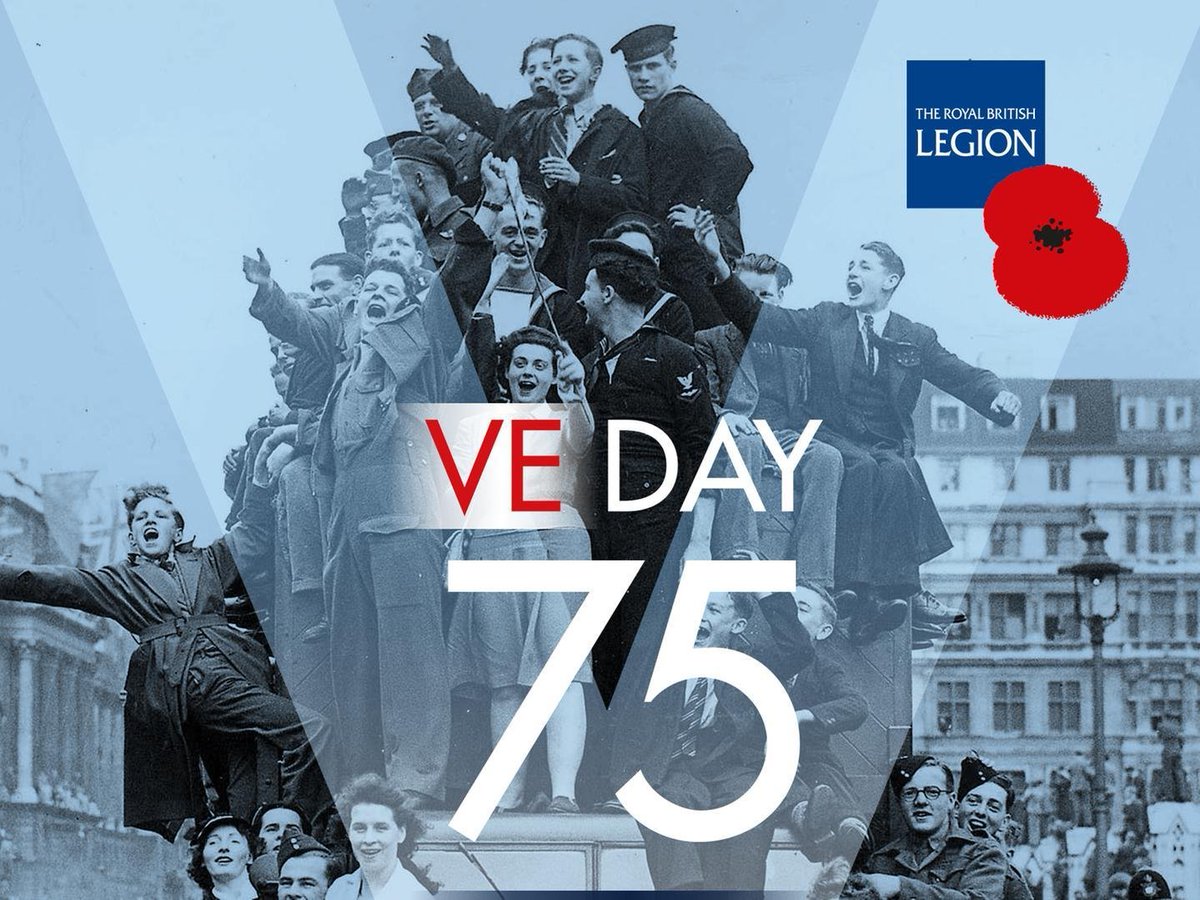 This image goes viral, possibly from an RBL source but surprisingly tricky to trace back.

Quickly gains traction as a meme and becomes the subject of mockery.

It is very, very different from the RBL website. /68
https://www.britishlegion.org.uk/get-involved/remembrance/remembrance-events/ve-day-75 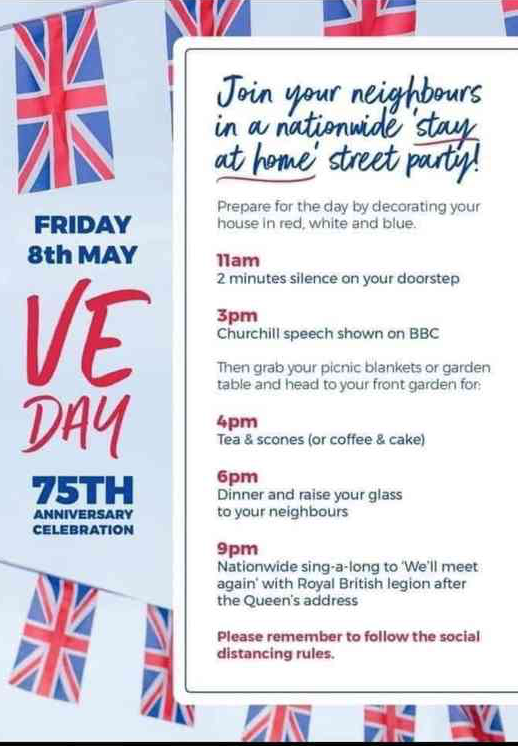 https://www.britishlegion.org.uk/get-involved/remembrance/remembrance-events/ve-day-75
We then have a wave of historians declare the above meme poster is the height of nationalistic excess.

In truth... I'm not a fan of enforced/socially encouraged signs of doorstep support - pressure isn't needed. If people want to cool, don't push them to do it. /70
All of this is pretty much the norm every five years since 1995. None of this is new.

All the popular evolved tropes are contained within that meme.

That it is seen as nationalist highlights a real disconnect. /71
Looking at other similar events, I'm going to be very honest... scones ain't nationalist. 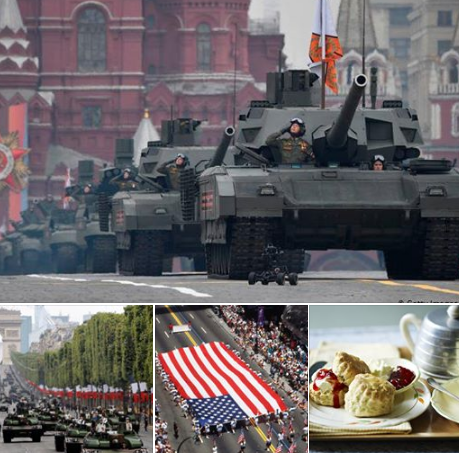 Boiling down to RBL for one last time to reiterate.

All this is tame, ties in with engaging the youth (education pack), celebratory commemoration, etc... perhaps less of the internationalism (but we'll have to see how the Beeb does it). /73

The current context of VE-Day 2020 is underpinned by uncertainties, lockdown, Covid-19, Brexit… in uncertain times it appears we turn on certain events. /74
Which were always anchored around celebrating commemoration.

Neither are mutually exclusive, nor scones nationalist symbols. /75
So... for some seeing it as dogwhistle nationalism deeply resonates with these current times.

Just bare in mind once we kick something to the kerb, it can be very, very hard to get back.

So lets... positively reshape, reform, refocus for #VEDay80. /76
But don't call your relative a nationalist as they happen to be eating a scone on her front lawn on May 8.

They are engaging, and...

That's just silly. /thread
You can follow @ReassessHistory.
Tip: mention @twtextapp on a Twitter thread with the keyword “unroll” to get a link to it.