Read on Twitter
Did a webinar with @ryansheltonPT and his student and PT group this afternoon. Discussed doing a Tweetorial on the esssence of the Mckenzie system to accompany the discussion, so here is is.
“Old man shouting at clouds” does Mckenzie 101 a tweetorial.
The McKenzie method or MDT is a symptom modification and clinical reasoning method developed originally by Mckenzie and expanded on by multiple faculty of the Institute. The basic premise is that nonspecific LBP can be classified into three mechanical syndromes 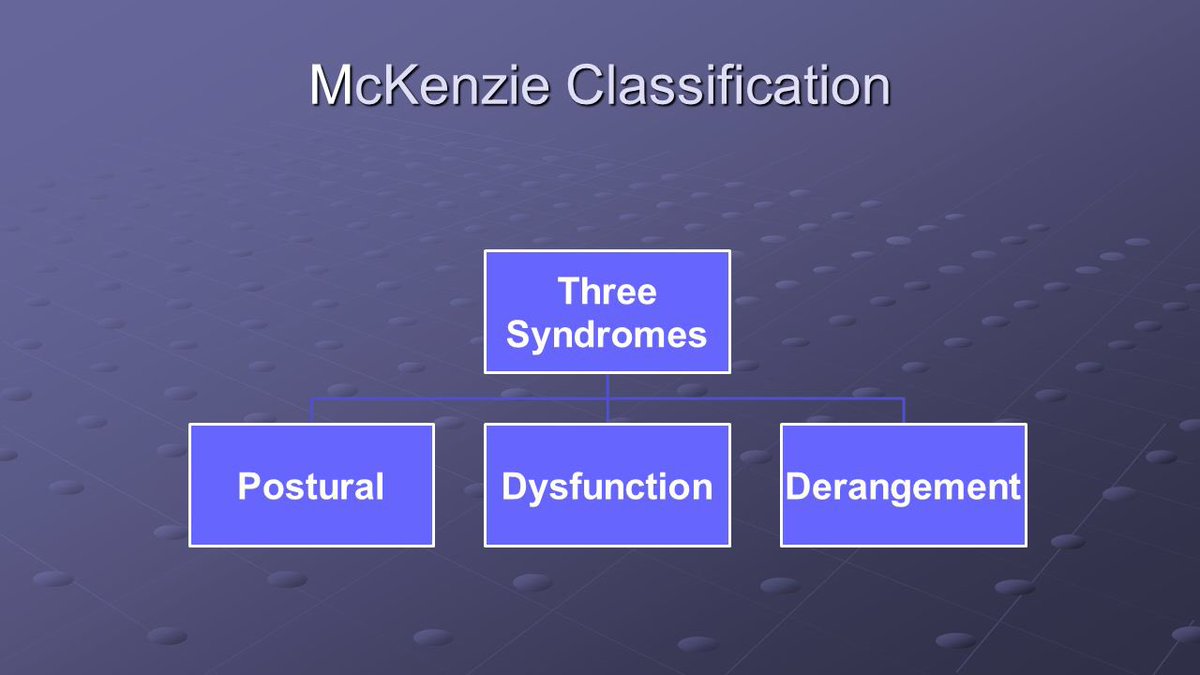 The system has evolved to include a catch all classification know as other, basically all the know conditions that aren’t NSLBP. Serious pathologies are checked for during the history process. This is similar to my Big Picture history process, red fags being assessed. 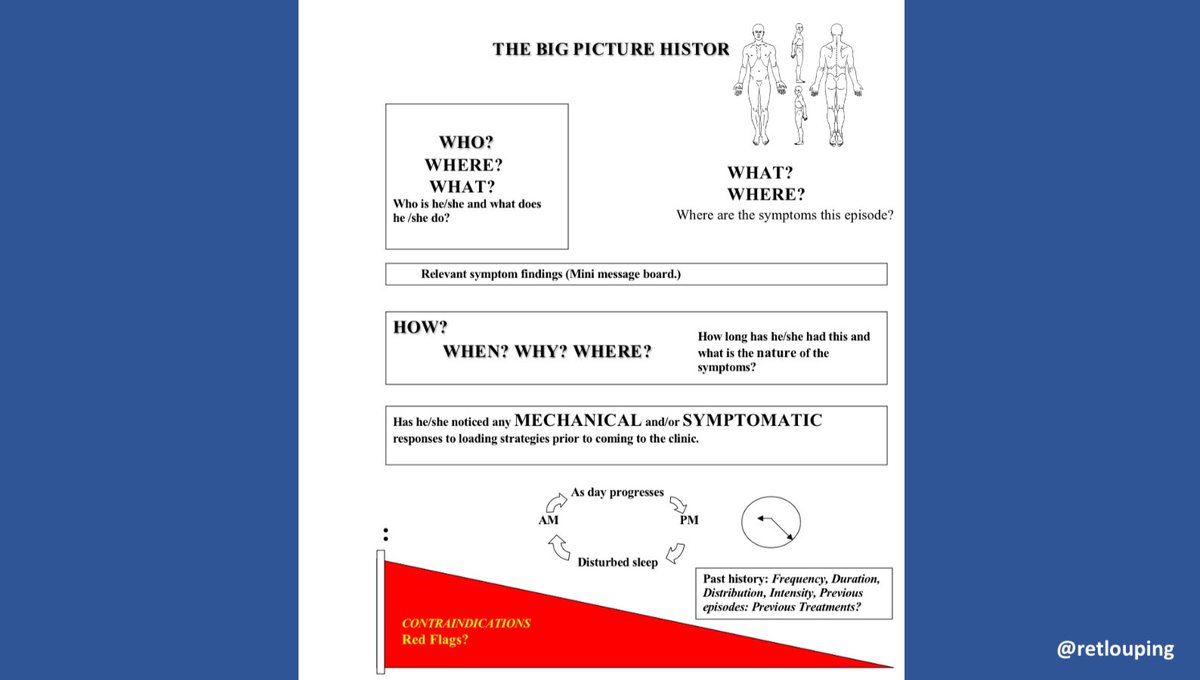 The three syndromes can be simply stated as follows, they can actually be identified via the patient history, without the need for a formal testing of repeated movements or static positions.
Posture syndrome (which I have never seen in 37 years) is pain produced by prolonged...
Postural loading at end range (McKenzie’s hypothesis) the pain is rarely if ever referred and is usually semtrical and central to the spine. Once you move out of the posture the pain ceases quickly and you can move fully & freely without pain. Mckenzie hypothesized this....
Was abnormal stress on normal tissue, I would propose it is more likely abnormal tissue and normal gravitational stress, tissue creeps under constant load, taking the tissue to a strain point that produces a pain response. I call this IDIOT syndrome I Do It Over Time.
There are many examples of syd prom responses similar to posture syndrome that do not drive people to treatment, neuropraxia from leg crossing, buttock pain from ischemia from prolonged sitting, pain in muscles from prolonged isometric contraction. None require treatment
Dysfunction syndrome is the restriction of a joints normal motion by thickened or contracted tissue. Historically the patient would have needed at least 6-12 weeks to develop this condition. It requires a prior trauma,surgery or life event leading to “avoidance”of normal function
Arthrofibrosis after knee replacement is a good example of dusyfunction syndrome. There needs to be enough time passed for tissue to heal, scar contract and adapt to the new environment and lack of motion. Historically the patient will report loss of function or joint motion
And pain at the end range of the restricted motion, the pain will be local (except in rare case of nerve root involvement)the pain will not last once movement away from the restriction is perfomed. Dysfunction doe snot change with testing and required remodelling over time.
Dysfunction should be obvious and easy to diagnose.

The most common Mckenzie syndrome (see Mckenzie studies) is the derangement. Derangement was named after the common pattern of Internal Deragement of the knee described by Cyriax and others, Mckenzie used this model...
For the spine. Simply put the derangement syndrome is characterized by a joint not moving fully and freely in all directions, sudden loss of joint motion and symptoms which change together. There is generally associated loss of motion with increasing pain. Characteristic..
And predicatable pain responses include the centralisation phenomenon (focalisation in my world) patinets describe that certain movement can increase or provoke symptoms, and pain can radiate away from it’s origin. The reverses can also be described. The “directional preference” 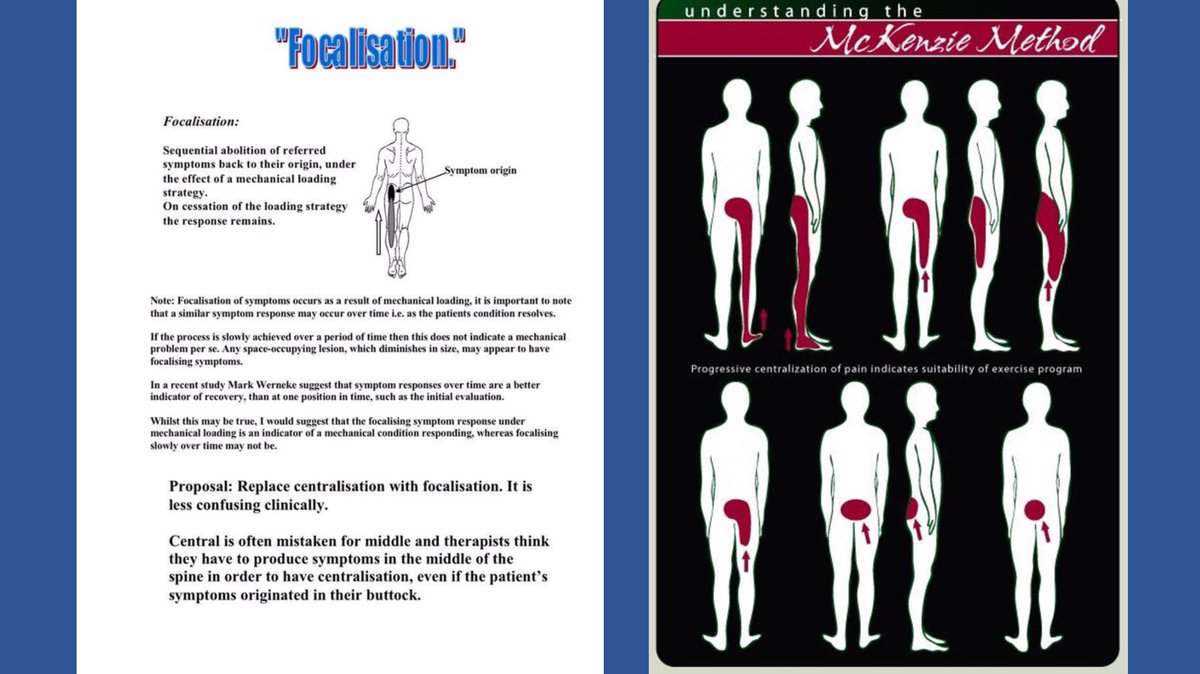 Can be listened to in a history. I prefer to use “preferred directional loading strategy”as it is more accurate,patients often respond to unloaded motion in one direction, but not the same motion when loaded.The same applies with therapeutic exercises.Only derangements centralise
It is possible to classify patients into McKenzie’s three (well in reality two clinical syndromes) Dysfunction & derangement. Remember dysfunction needs time greater than 10 weeks minimum, it is predictable, always, non referred and has restricted motion and symptoms at end range
Derangement is variable, sudden onset affects joint motion with symptoms in conjunction, can have varrying pain, intensity, frequency and distribution. Derangement originally had 7 sub classes now I believe there are 4. 1, 3,5 were based on pain location ie symmetrical somatic 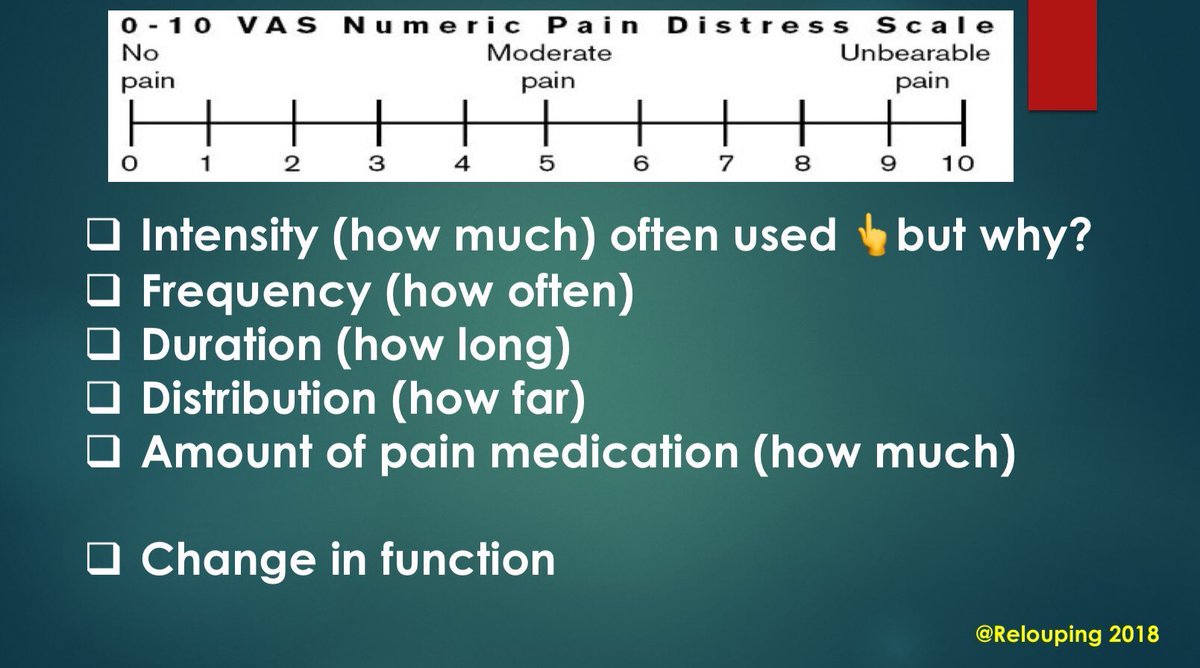 I developed the Active/Inactive cycle which utilizes mechanical and symptomatic responses to loading to classify presenting conditions without reference to the three syndromes. That is for another episode. Hope this makes sense of the Mckenzie system. 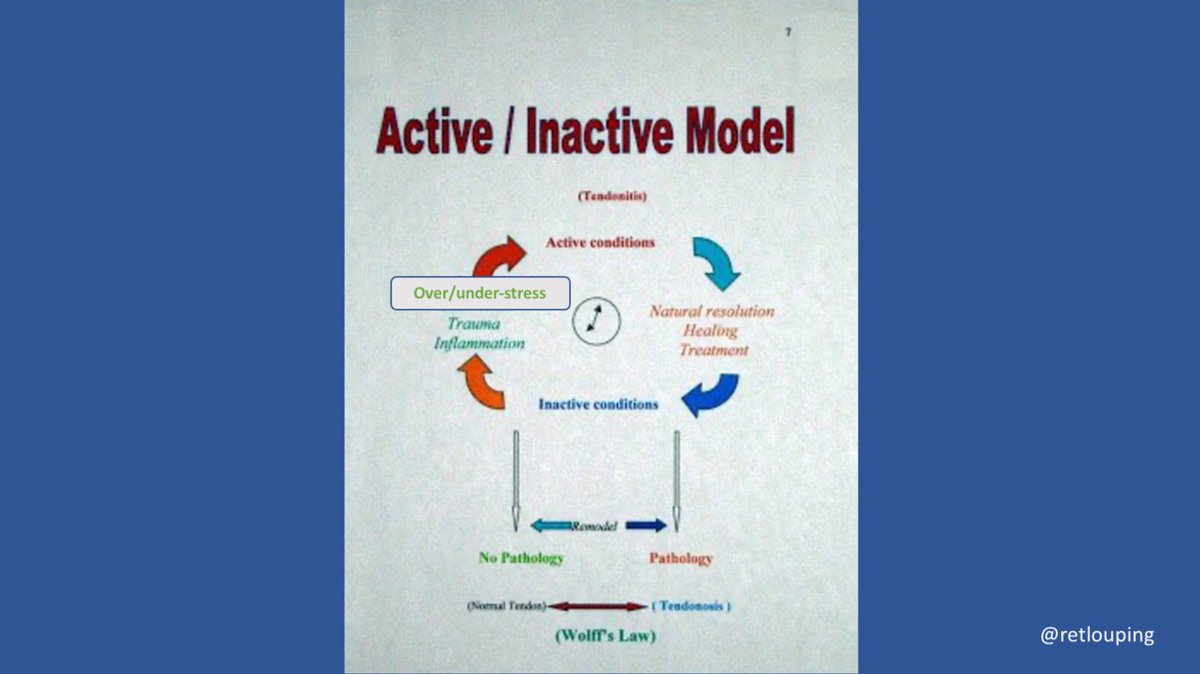 Thanks for reading. Stay safe.
You can follow @Retlouping.
Tip: mention @twtextapp on a Twitter thread with the keyword “unroll” to get a link to it.