Read on Twitter
Should the OHS video-inspection of #Cargill's safety prior to 500 people becoming infected and one worker dying be released to the public?

Share/comment for "yes"
Ignore for "no"

"'They knew there was a problem. Why did they wait until somebody died?' UFCW Local 401 President Thomas Hesse questions why it took so long to close."

A meat-processing plant near High River at the centre of the worst outbreak of COVID-19 in Alberta will temporarily shut down.

https://www.cbc.ca/news/canada/calgary/cargill-meat-plant-closed-outbreak-covid-19-1.5538824
The #UCP Minister of Agriculture and Forestry told Legislature that the plant was safe. 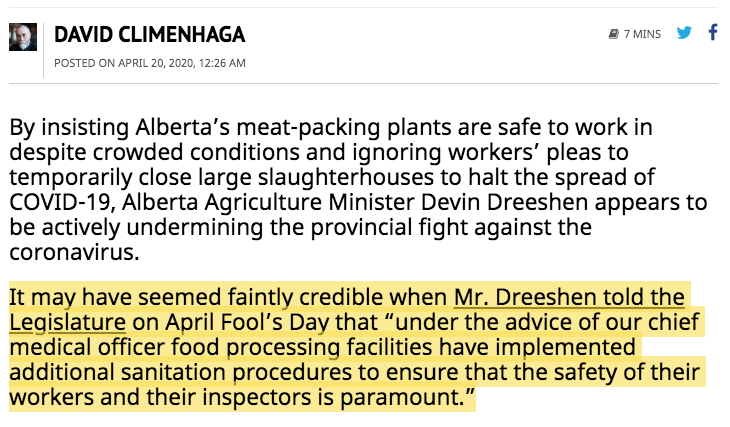 . @djclimenhaga's article on this is excellent so I want to highlight it here.

By insisting Alberta’s meat-packing plants are safe to work in despite crowded conditions and ignoring workers’ pleas to temporarily close large slaughterhouses to halt the spread of COVID-19,...

https://albertapolitics.ca/2020/04/devin-dreeshens-happy-talk-about-workplace-safety-undermines-the-battle-against-covid-19/
Dreeshan's tweet on the matter was quick to earn a ratio. It did not age well. https://twitter.com/DevinDVote/status/1251643360747511808?s=20

Ever the faithful warrior for the Premier, Matt Wolf quickly rode in to defend the #UCP... then back-pedalled... then suddenly a response plan---along the lines of what Notley had asked for---was drawn up and released. 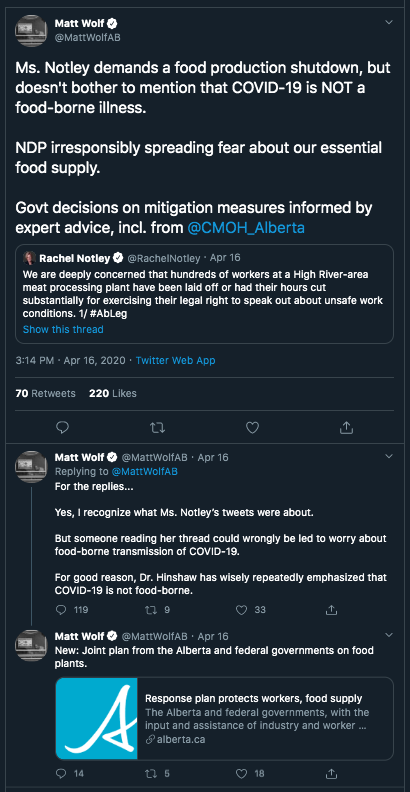 Almost a week before Matt's comedic backpedal, the union raised the Alarm.

"Minnesota-based company says it's doing what it can to keep workers safe." Sure, Jan.

The union representing some workers at a meat packing plant south of Calgary says there are dozens of confirmed COVID-19 cases at the facility and it should be closed for at least two weeks to come...

https://www.cbc.ca/news/canada/calgary/cargill-meat-plant-union-covid-19-1.5530836
If you're paying attention you'll notice that my thread isn't exactly following dates sequential. I apologize. This pandemic stuff moves very quickly, and I'm just a jar of piss on the internet who makes frequent typos.

"There's no doubt in our minds that this is a workplace fatality,' said AFL president Gil McGowan on Tuesday."

The death of a High River meat plant employee from COVID-19 should be treated as a workplace fatality and a criminal investigation should be launched, the Alberta Federation of Labour said Tuesday.

It was obvious now that the #UCP's response (Matt Wolf had cited) had come too late. The pleas from the unions had been ignored.

The Alberta and federal governments, with the input and assistance of industry and worker representatives, have developed a plan to respond to confirmed cases of COVID-19 in food processing plants.

The plant where 2,100 people worked is responsible for 36 per cent of Canada’s beef production capacity, according to the Canadian Cattlemen’s Associa...

https://www.thestar.com/politics/federal/2020/04/21/closure-of-alberta-beef-plant-could-push-up-prices-but-shouldnt-create-shortages-trudeau-says.html
What is The UCP Minister of Agriculture and Forestry doing?

Is he thinking back on times when he was partying with friends?

(Maybe?) https://www.vice.com/en_ca/article/d3e8pq/conservative-candidate-in-alberta-hiding-past-as-a-trump-campaigner
Conservative Candidate in Alberta Hiding Past as a Trump Campaigner

When VICE tried to question UCP candidate Devin Dreeshen about his past at an event, he went to the bathroom and wasn’t seen again.

https://www.vice.com/en_ca/article/d3e8pq/conservative-candidate-in-alberta-hiding-past-as-a-trump-campaigner
Dreeshan trying to turn the page. He doesn't want attention for his role in delaying action at #cargill.

Here he is trying to puff up farm labour. (Look at that PPE!) 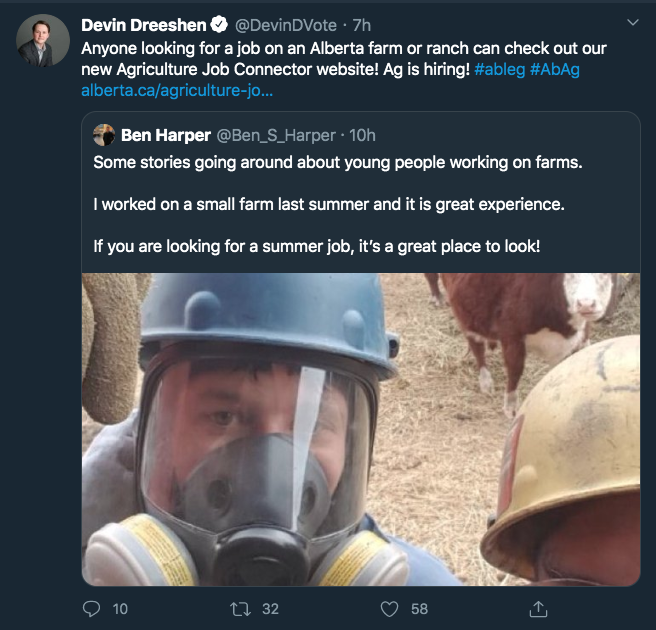 Of course this is months after Dreeshan voted to allow

"The majority of Alberta farm operations would no longer have to follow employment standards rules or have workplace insurance."

The majority of Alberta farm operations would no longer have to follow employment standards rules or have workplace insurance under a bill introduced in the legislature.

In the aftermath of this, some people are calling for communication between the #UCP and American multinational food conglomerate, #Cargill be subject to an immediate #FOIP request.

...While others are calling for the MLA for Innisfail - Sylvan Lake to resign.

One worker has died and 484 have been infected by COVID-19 at a Cargill Foods food processing plant in Alberta. Employees at Cargill Foods in High River were raising concerns a month ago about...

https://north99.org/alberta-agriculture-minister-devin-dreeshen-must-resign/
And this #Cargill / #COVID19AB focused thread doesn't even get into the ways Dreeshan has failed Innisfail - Sylvan Lakehis by essentially voting for policies to chase doctors out of town.

What happens after? Another attempt to turn the page.

Dreeshan amplifies an attack on @RosieBarton by "True North Centre for Public Policy" which is an organization founded by former Postmedia employees, no better than Rebel Media.

#Ableg #cdbpoli #Cargill
We should not allow this page to be turned!

In the middle of a pandemic, like all other times, worker safety is important. People must be held accountable.
This is already the longest thread I've ever done on twitter. Thanks for following along!

For a less scattered account of all this, again, I recommend reading the http://albertapolitics.ca  article I posted above https://twitter.com/youseepeeYYC/status/1253153866503290880?s=20
And this slightly more recent account. Both are better written than this string of scattered thoughts and links I've assembled here. https://albertapolitics.ca/2020/04/alberta-safety-inspection-of-cargill-slaughterhouse-done-by-facetime-with-no-actual-inspector-on-site/
Alberta safety inspection of Cargill slaughterhouse done by FaceTime, with no actual inspector on...

https://albertapolitics.ca/2020/04/alberta-safety-inspection-of-cargill-slaughterhouse-done-by-facetime-with-no-actual-inspector-on-site/
You can follow @youseepeeYYC.
Tip: mention @twtextapp on a Twitter thread with the keyword “unroll” to get a link to it.