Read on Twitter
At first glance this looks like progress. But when you scratch beneath the surface of each headline you see how far we have to go.

An “8.7% reduction in emissions from power generation in 2019” is largely due to Moneypoint coal fired station being offline for maintenance for much of last year.
Accident not design.
A 3% decrease in dairy industry processing emissions was incorrectly attributed to “dairy” by some ... 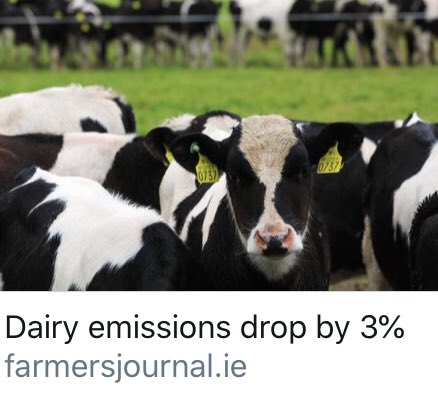 It was actually a 3% reduction in the emissions from making powdered milk etc in the processing end of the dairy industry. Not unwelcome, but hardly a gamechanger.
A “2% decrease in emissions from the cement industry” is actually a symptom of the housing crisis. Nearly three quarters of that figure is due to decreased manufacture of clinker.
The rest is because burning biomass instead of oil.
Biomass currently has “zero value” assigned to it for generating greenhouse gases.
From next year it will have to prove it is sustainable.
The last headline re emissions from aviation “reported” to Ireland was worth a tweet of its own. https://twitter.com/epaireland/status/1252970158332751874

Measured by emissions alone we are flying as much as we are driving.

You can follow @boucherhayes.
Tip: mention @twtextapp on a Twitter thread with the keyword “unroll” to get a link to it.