2/ The YouTube write-up is an accurate summary of the movie's argument.
The misanthropy inherent in the phrase "out-of-control human presence" is ... revealing.

3/ This movie will split the environmental movement between the (hardline, blue collar) "degrowth" and (moderate, white collar) "green growth" factions.
It's a proxy for class politics, Gaia-style!
4/ Here's how the two sides look if you mapped them onto the familiar technology diffusion model.
There is indeed a chasm between the two groups. 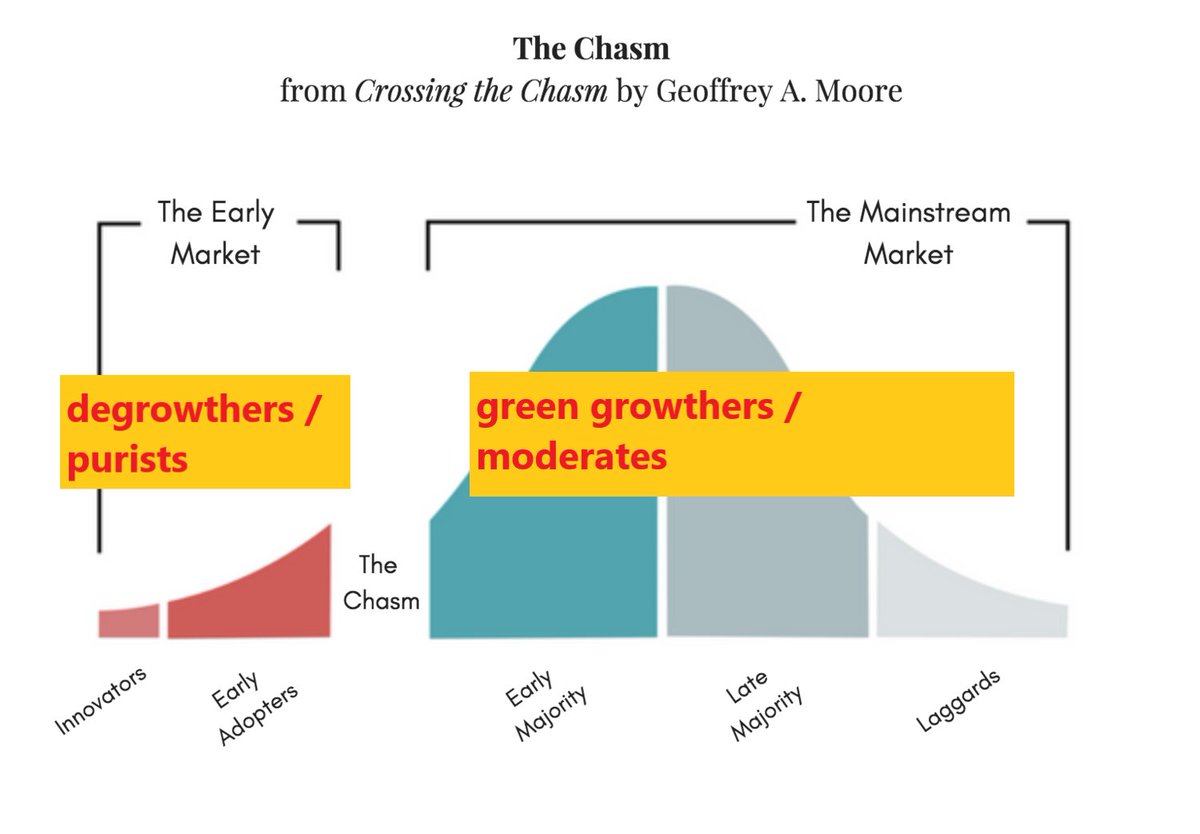 5/ I suspect white-collar, wealthier green growthers will dismiss the movie for a lot of outdated information.
Blue-collar, hardscrabble degrowthers will champion its condemnation of photo-op incrementalism. And the corruption. Oh, the corruption!
6/ On to the movie itself!
It has three unimpeachable subtexts:
1. no one likes hypocrites
2. no one likes grifters
3. everyone wants to believe in feel-good stories

... but that'll have to come in a couple hours' time!
7/ Re: hypocrites, #PlanetoftheHumans calls out the idea that #solar and #wind are a perfect solution.
I don't know many non-grifters who say they are.
So it feels like a strawman argument.
8/ Add energy storage (short term

support for criticizing festivals and companies who say they're 100% solar or renewables-powered, when they aren't. Ahem.
9/ $MSFT (no position) IS going all-renewables 24/7 instead of just producing as much electricity as they consume per year. Long-term (2050) they'll offset their cumulative historical emissions.

The movie skips this, because capitalism is bad.

https://group.vattenfall.com/press-and-media/news--press-releases/pressreleases/2019/vattenfall-and-microsoft-pilot-worlds-first-h-ourly-matching-247-of-renewable-energy
Hourly matching of renewable energy - a first-of-its-kind solution piloted at Vattenfall and...

Vattenfall and Microsoft have developed a first-of-its-kind solution, making it possible to go from year-based data to hourly based data on source of origin.

https://group.vattenfall.com/press-and-media/news--press-releases/pressreleases/2019/vattenfall-and-microsoft-pilot-worlds-first-h-ourly-matching-247-of-renewable-energy
10/ We learn the Koch Brothers

embedded themselves in the solar panel value chain. They profit from solar subsidies!!

11/ Al Gore gets called out for selling his TV channel startup to (LNG exporting titan) Qatar's Al Jazeera. I don't see the big deal myself. Why not? He could pour more one-time fossil money into renewables!
12/ A big deal is made about Saint Bill McKibben and http://350.org  getting money from the Rockefellers. He was clearly uncomfortable when challenged. Well jeez, if you aren't comfortable with the money, you should've refused it.

350.org: A global campaign to confront the climate crisis

We are standing up to the fossil fuel industry to stop all new coal, oil and gas projects and build clean energy future for all.

You may know Clay from this GIF

14/ Real-life example that somehow wasn't in the movie.
@SierraClub's Beyond Coal campaign was originally funded with $25MM, mostly from nat gas fracking king and famous-for-the-wrong-reasons Aubrey McLendon! https://science.time.com/2012/02/02/exclusive-how-the-sierra-club-took-millions-from-the-natural-gas-industry-and-why-they-stopped/
Exclusive: How the Sierra Club Took Millions From the Natural Gas Industry—and Why They Stopped... https://science.time.com/2012/02/02/exclusive-how-the-sierra-club-took-millions-from-the-natural-gas-industry-and-why-they-stopped/
15/ Taking fossil money was *extremely* controversial in the club. Was it the right move? Yes. Would I have done it? Yes! Every time!! Coal is/was the bigger foe!
I'll circumvent Godwin's Law by referencing Churchill.

biofuels). Honest people admit it.
Preachy people who know they're hypocrites prevaricate.
The movie showed who they are.

You can follow @ElectronComm.
Tip: mention @twtextapp on a Twitter thread with the keyword “unroll” to get a link to it.