Read on Twitter
THREAD. With the protests against stay-at-home orders mushrooming across the U.S., journalists and pundits are making comparisons to the Tea Party protests of 2009-2010. It's worth revisiting what many historians concluded about the Tea Party.
The national debt had indeed gone up during these years. TARP, Medicare Part D, tax cuts, foreign wars, the ACA all contributed. There was an (in)famous rant by Rick Santelli on CNBC that supposedly coined the phrase.
Was the Tea Party a genuinely grassroots movement that erupted spontaneously or was it concocted from above by wealthy billionaires?

It's impossible to give a definitive answer. Certainly Americans for Prosperity may have amplified a pre-existing phenomenon.
In other words, even if there was a grassroots element to the Tea Party, it *certainly* got a lot of coverage in mainstream media, especially Fox. And Citizens' United had opened the floodgates of SuperPACs giving anonymous donations. http://www.motherjones.com/politics/2012/12/freedomworks-rich-donors-armey-kibbe-super-pac
Powerful Tea Party Group’s Internal Docs Leak—Read Them Here

FreedomWorks bills itself as a grassroots outfit, but it's bankrolled mostly by big-money donors.

http://www.motherjones.com/politics/2012/12/freedomworks-rich-donors-armey-kibbe-super-pac
On debts and deficits, it was striking that Tea Partiers seemed to be most enraged when Obama was in the White House. Where were the objections to Iraq, tax cuts, Afghanistan, and first iteration of TARP, all passed by Bush 43? And what about Trump's contribution to the debt?
Thankfully there's been some positive advancement in the economics profession since 2010. We realized austerity inflicted punishment on the most vulnerable; that in a recession getting people back to work should be the priority; and Modern Monetary Theory (MMT) has emerged.
What types of folks gravitated toward the Tea Party and what did its most vocal adherents believe? And what were the (many) contradictions embedded in these beliefs?

You might remember the raucous town halls and the old, white men in tricornered hats 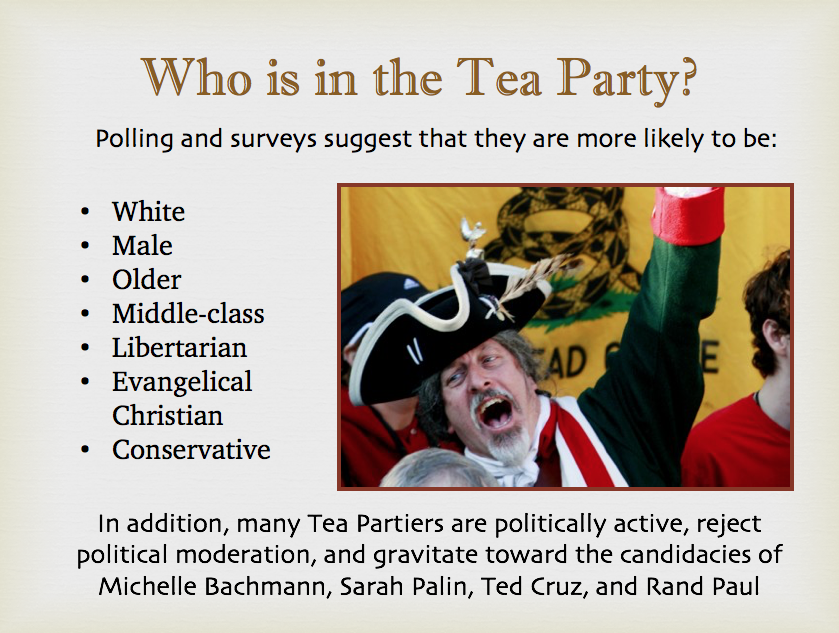 Here is a synopsis of some of their beliefs. 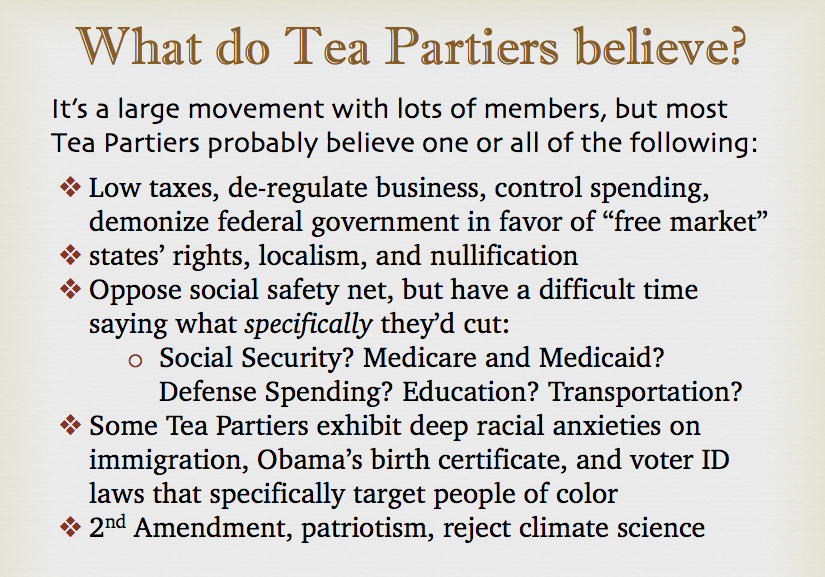 For this image I'm drawing on the work of Jill Lepore, especially her book, THE WHITES OF THEIR EYES. How an academic historian looks at the past is *VERY DIFFERENT* from the celebratory, whitewashed nostalgia inherent in the Tea Party. 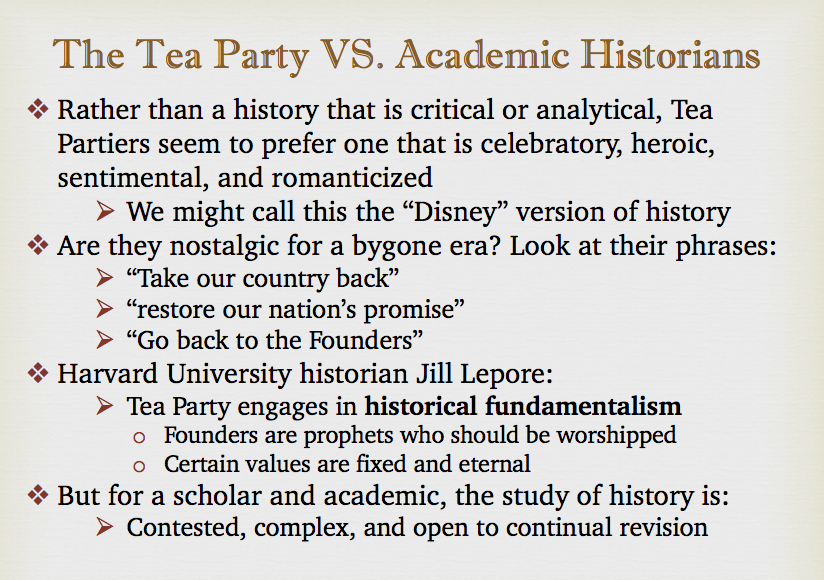 Lepore wrote many articles on this subject and even appeared on Bill Moyers. For all of the references to "the founders" that the Tea Partiers peddled, the founders, as Lepore understood them, would be baffled by the Tea Partiers today. http://billmoyers.com/2014/07/04/july-4th-note-to-tea-partiers-your-politics-would-baffle-the-founding-fathers/
July 4th Note to Tea Partiers: Your Politics Would Baffle the Founding Fathers | BillMoyers.com

Historian Jill Lepore says that the debates of 240 years ago offer no insight into those of today.

http://billmoyers.com/2014/07/04/july-4th-note-to-tea-partiers-your-politics-would-baffle-the-founding-fathers/
As I'm writing this thread (which I did not plan), I'm finding that I could take this in multiple directions: critiques of originalism; the notion I learned from Eric Foner that "liberty" has multiple meanings, beyond just the protection of private property. How to focus?
For now let's get some of the scholarly treatment out there.

Those who have examined the beliefs of the Tea Party closely concluded that there was *much more* focus on racial anxiety and racism than pure economics.
I know, shocking, right? If you're familiar with the political science literature on what motivated Trump voters, you'll know that study after study noted that those white midwesterners who were Obama-Trump voters were much more animated by racial animus than "economic anxiety"
This was a valuable study from Vanessa Williamson, Theda Skocpol, and John Coggin.

https://scholar.harvard.edu/files/williamson/files/tea_party_pop_0.pdf
Christopher Parker at the University of Washington did good work, too.

http://depts.washington.edu/uwiser/racepolitics.html
Parker appeared on Episode 32 of the No Jargon Podcast, which is worth a listen.

This episode reminded me of @Prof_EOB's excellent work on Voter ID. She was another guest on this podcast.

The value of empirical studies is they cut through mere opinion.
Some additional evidence linking the racial conservatism (I'd say that's often a euphemism for racial animus and even racism) of Tea Partiers with the economics. 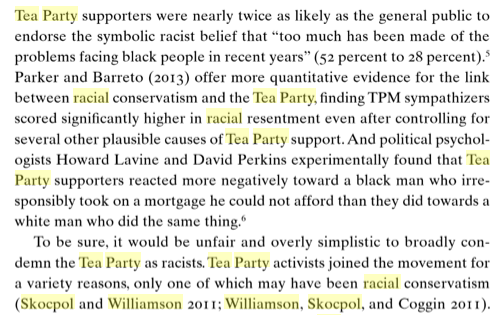 One point worth considering is the relationship between the Tea Party and the religious right.

This poll suggests there was significant crossover membership between the two, which would contest and even overturn the notion that it purely about economics
In Search of Libertarians in America | PRRI

https://www.prri.org/research/2013-american-values-survey/
And this brings up the question of to what extent the Tea Party was genuinely new in 2010 or whether it was part of the same old disreputable, fringe elements that have come to characterize modern conservatism. https://www.thedailybeast.com/how-the-tea-partys-apocalyptic-politics-are-destroying-the-republican-party
How the Tea Party’s Apocalyptic Politics Are Destroying the Republican Party

Tea Party leaders view themselves as modern prophets of the end of times, ratcheting up their rhetoric to prove that Obama is evil and God is on their side.

https://www.thedailybeast.com/how-the-tea-partys-apocalyptic-politics-are-destroying-the-republican-party
Were Tea Partiers merely John Birchers and Phylis Schlafly types with a more modern branding? I think to a very significant extent, yes.
Here is Sean Wilentz on the Cold War origins of the Tea Party.

I've followed debates about the 1619 project so I'm aware that Wilentz's views have come under criticism. Still, it's worth considering his point of view here.
Confounding Fathers

https://www.newyorker.com/magazine/2010/10/18/confounding-fathers
A cynical--though not necessarily inaccurate--interpretation holds that it became unfashionable to openly say you supported GW Bush in 2008. So Repubs merely rebranded themselves as the Tea Party. But white, male cultural resentment was always the point https://www.thedailybeast.com/the-tea-partys-phony-populism
The Tea Party's Phony Populism

https://www.thedailybeast.com/the-tea-partys-phony-populism
In this sense I'm reminded of the argument put forth by Michelle Alexander in @thenewjimcrow: it became unfashionable circa 1970 to say you opposed civil rights so you gravitated toward "states' rights," "limited government," "tough on crime," and "law and order."
Here's some blogging I did on libertarianism not too long ago:

http://www.historianstevecampbell.com/blog/the-problems-with-libertarianism-part-iii-race
It's worth repeating that for all the professed concern about debt, Tea Partiers sure did seem to care a lot about Obama's birth certificate, immigration, Voter ID, climate denialism, etc.

http://www.huffingtonpost.com/2012/11/05/poll-watching_n_2078563.html
The Gadsden flag became the symbol of the Tea Party. But how often do we see this flag waved simultaneously with the Confederate flag? https://www.rawstory.com/2018/04/black-students-taunted-slaves-michigan-school-surrounded-confederate-flags/
Black students taunted as ‘slaves’ at Michigan school surrounded by Confederate flags

A Michigan woman says her grandson has endured racist bullying at a high school that’s surrounded this week by pickup trucks waving Confederate flags. The demonstration in Auburn, which is more than...

https://www.rawstory.com/2018/04/black-students-taunted-slaves-michigan-school-surrounded-confederate-flags/
To conclude, racism (or if you prefer a more polite term, racial anxiety) was not just an unfortunate byproduct of the Tea Party. It was its very essence. Let's keep this in mind when you see media coverage of all of the protests in the coming weeks. 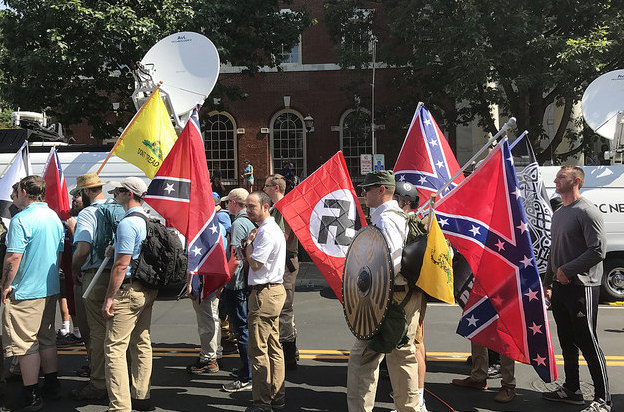 I wonder what the Venn diagram is between the protesters waving flags right now and the Cliven Bundy types. There was the infamous standoff in Nevada and Bundy's son, who pulled a similar stunt in Oregon. @SethCotlar @Lady_Historian
https://twitter.com/TheDevilHistory/status/1251991904226607104

And here's the infamous and *extremely* racist video of Cliven Bundy openly wondering about what would be good for African Americans. 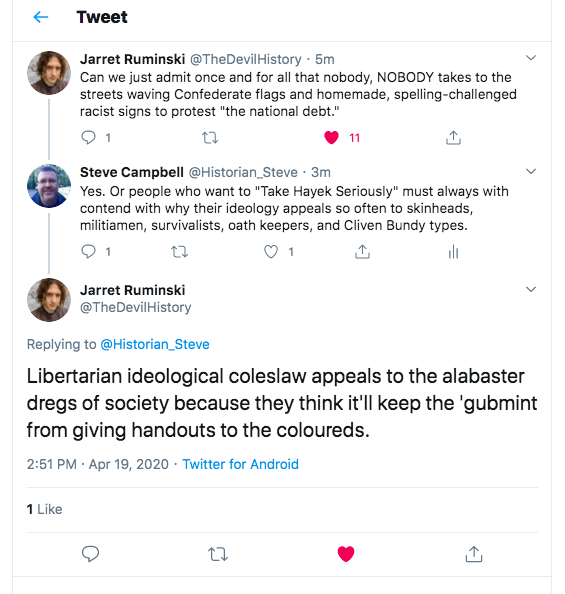 You can follow @Historian_Steve.
Tip: mention @twtextapp on a Twitter thread with the keyword “unroll” to get a link to it.