Read on Twitter
'Virtuous cycles' between tech and political progress on clean energy - discussed in this timely new piece - is still a pretty vague idea.

I agree with @greenprofgreen that this article focuses too much on the tech side of the feedbacks.

But poli-sci policy-feedback research typically does the opposite -e.g. doesn't account for diffs between the technologies at the center of the process. https://twitter.com/greenprofgreen/status/1250138476391079947?s=20

So my article focuses on how different tech-poli feedbacks become when industries scale and what might make some tech more 'friendly' to these feedback cycles.

I hope it has something interesting for political scientists *and* engineers. https://www.sciencedirect.com/science/article/abs/pii/S2214629619300684?dgcid=author
Beyond the low-carbon niche: Global tipping points in the rise of wind, solar, and electric...

...'virtous cycles' can be mapped in more detail - e.g. the power that comes with industry-scale also reduces the political challenge (fig 1) 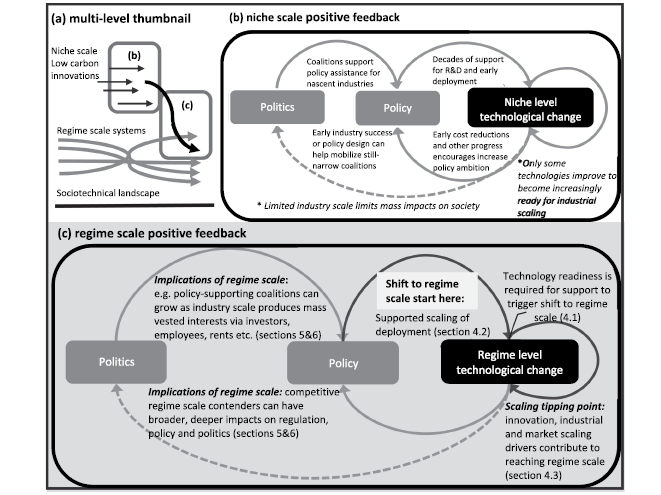 Different tech has different potential to play into these cycles. It's not exactly "each innovation" that increases political will, and political shifts are often specific, tied to industry-specific government revenues or jobs.
What's different at scale?

Industrial scaling and cost competitiveness can have diverse political ramifications not possible at a smaller scale. Take @beyondcoal: Once wind & PV scaled, this helped the campaign push back the coal industry.
I introduce indicators of 'regime level' scale bcs different policy support is helpful at different stages.

A similar story with li-ion EVs 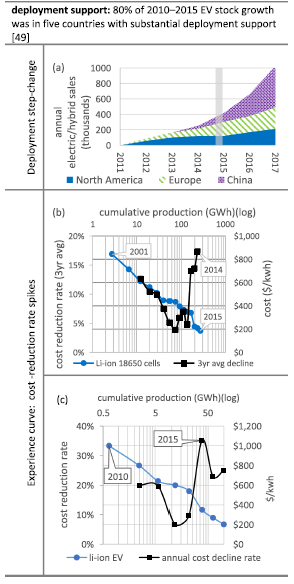 A key problem for a #Greennewdeal and similar programs is the speed they require to resolve sociopolitical & tech friction.

In light of that, there is justification to...
...prioritize 'feedback friendly' tech - e.g popular, fast deploying/innovating PV - which can help build momentum in ways that unpopular and slow-moving nuclear cannot (without ignoring direct GHG implications!).
You can follow @ydstrauch.
Tip: mention @twtextapp on a Twitter thread with the keyword “unroll” to get a link to it.