Read on Twitter
Trump supporters keep going, "he didn't say the virus was a hoax!" even in response to people correctly saying that he called CONCERN about the virus as a SERIOUS THREAT a "hoax." 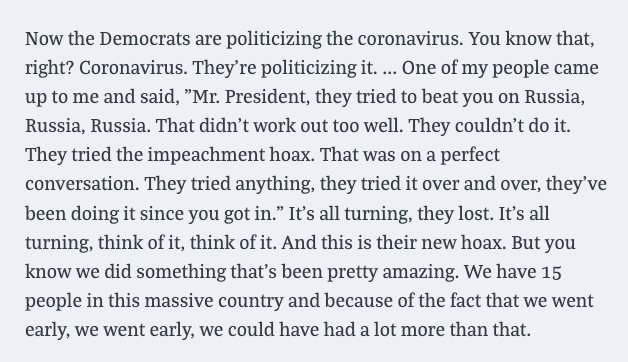 People were saying "Hey! You're not doing enough! Dusting your hands off and going, 'Job well done!' when this is very clearly still a very real threat is bad leadership!" and he was calling that a "hoax."
Also, lest you think that this was from late January or early February, IT WAS FROM A FEBRUARY 28 RALLY. It was the very end of February, and he was calling it a "hoax" that people were worried about this, pushing the idea that it's part of a conspiracy to take him down.
So screw off with this "ermmm he never said it was a hoax" nonsense. You're distorting what people are actually arguing, you vile doofuses. https://factba.se/transcript/donald-trump-speech-kag-rally-north-charleston-south-carolina-february-28-2020
Transcript Quote - Speech: Donald Trump Holds a Political Rally in North Charleston, South Carolina...

https://factba.se/transcript/donald-trump-speech-kag-rally-north-charleston-south-carolina-february-28-2020
You can follow @ParkerMolloy.
Tip: mention @twtextapp on a Twitter thread with the keyword “unroll” to get a link to it.