Read on Twitter
I have some thoughts on this advertising agency's tactics that I can only post when America is asleep, lest I lose a huge proportion of my followers.....thread follows https://twitter.com/steak_umm/status/1249862846030249985

First, an explanation. American frozen streak strip brand 'Steak Umm' has one of those human-sounding social accounts, designed specifically to appeal to millenials. It posts like a person, and in doing so, draws regular huge reactions 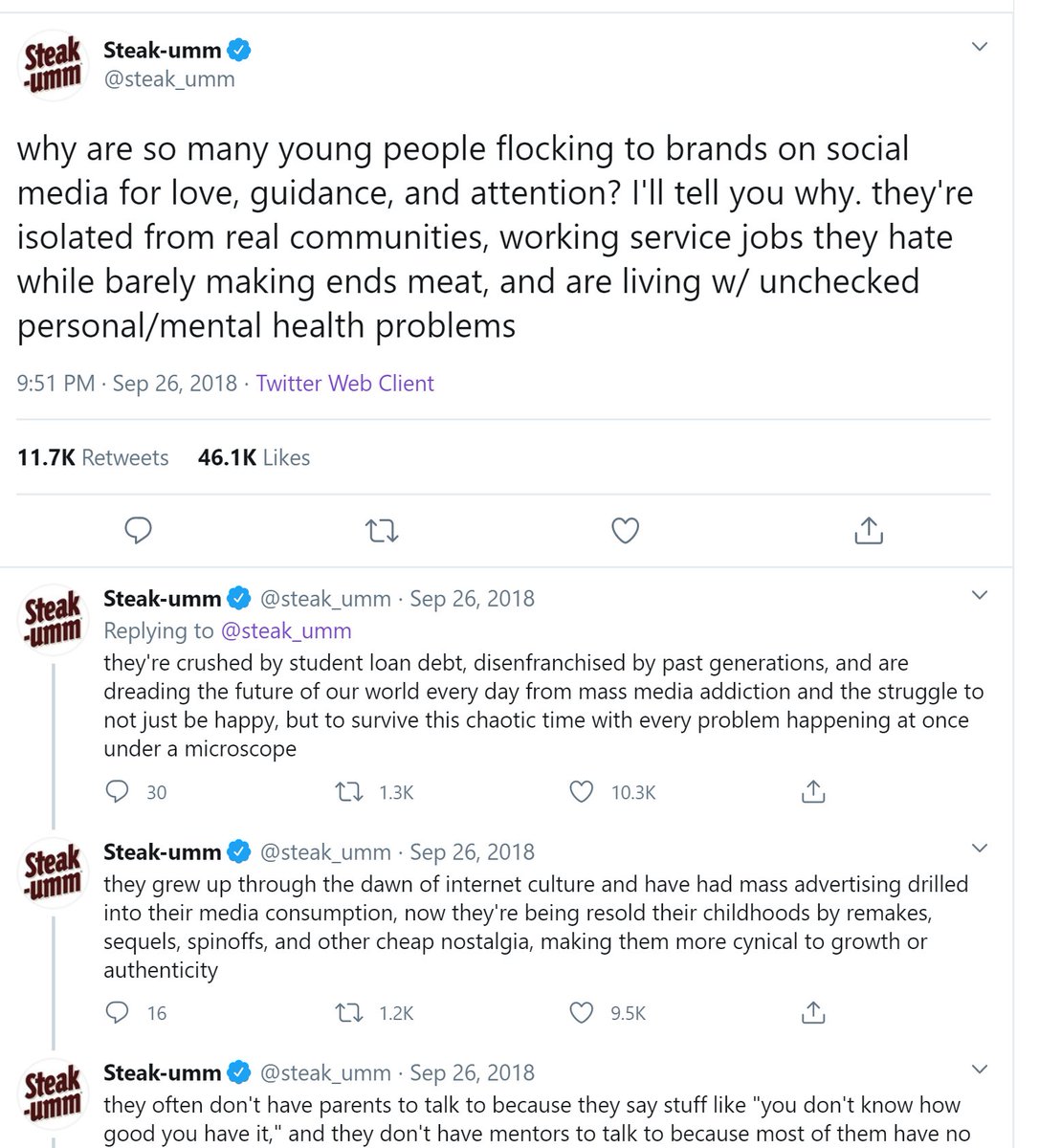 Uniquely, Steak Umm doesn't just post ennui or jokes. It is often thoughtful, unique and striking commentary. For #covid19, there have been a range of good threads on expertise, natural thinking, misinformation etc, and each have drawn strong support, mostly from Americans: 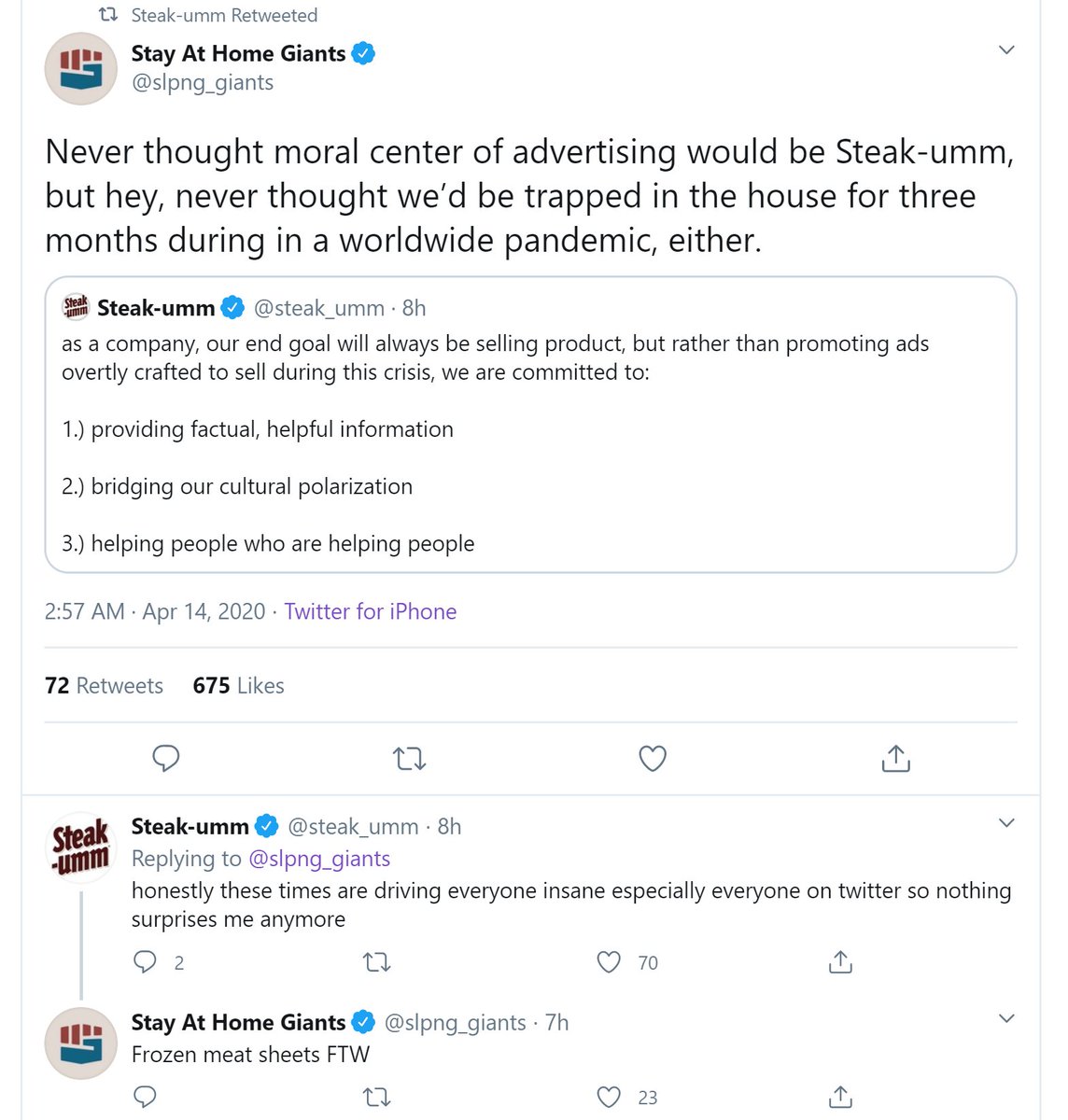 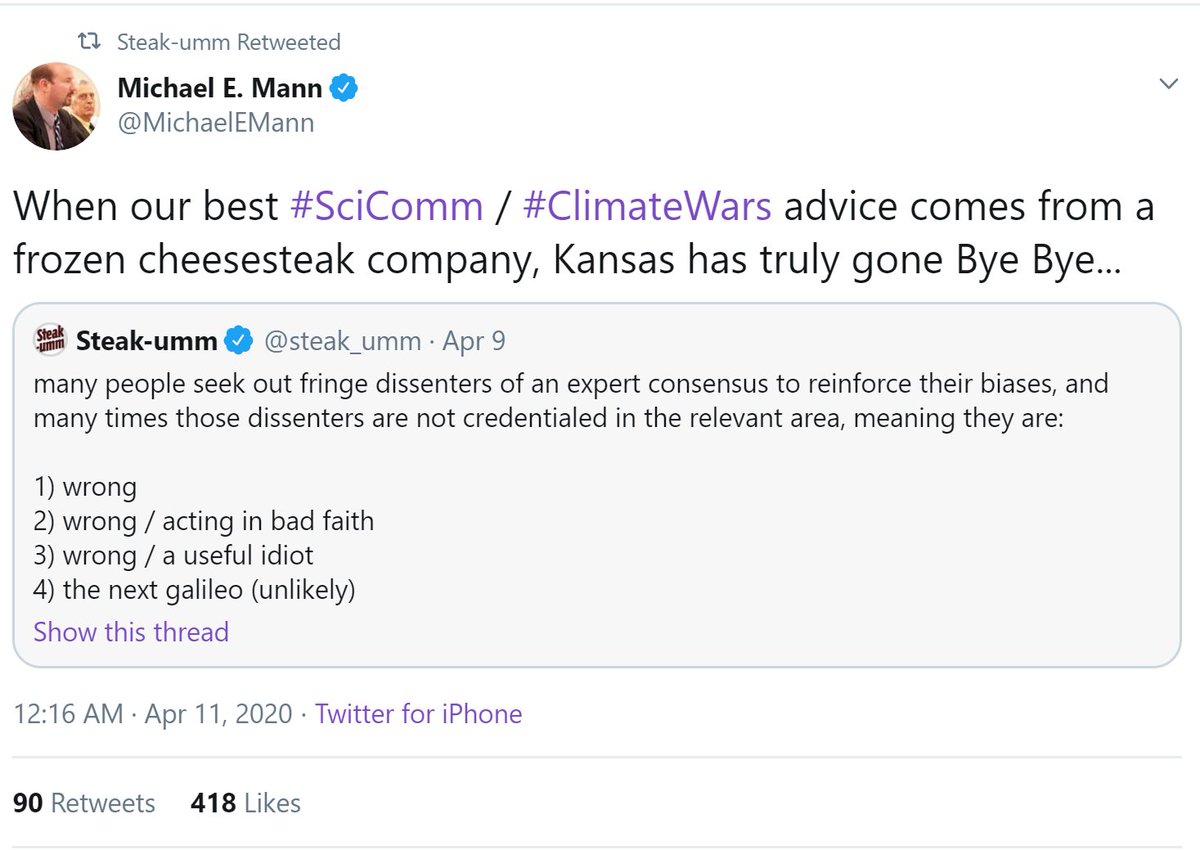 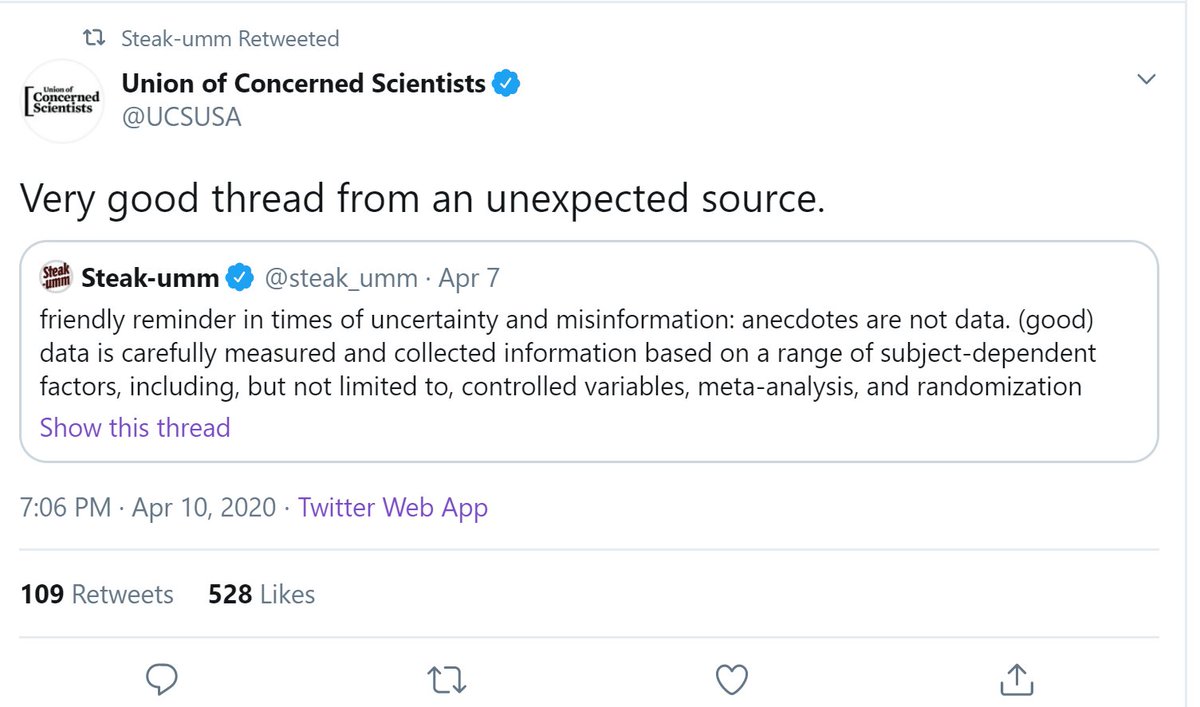 The thing is, everyone keeps referring to the cute irony of a frozen meat strips banding totally owning public commentary on covid.

It isn't. No one from that company is posting the messages. It's an advertising agency: Allebach communications. 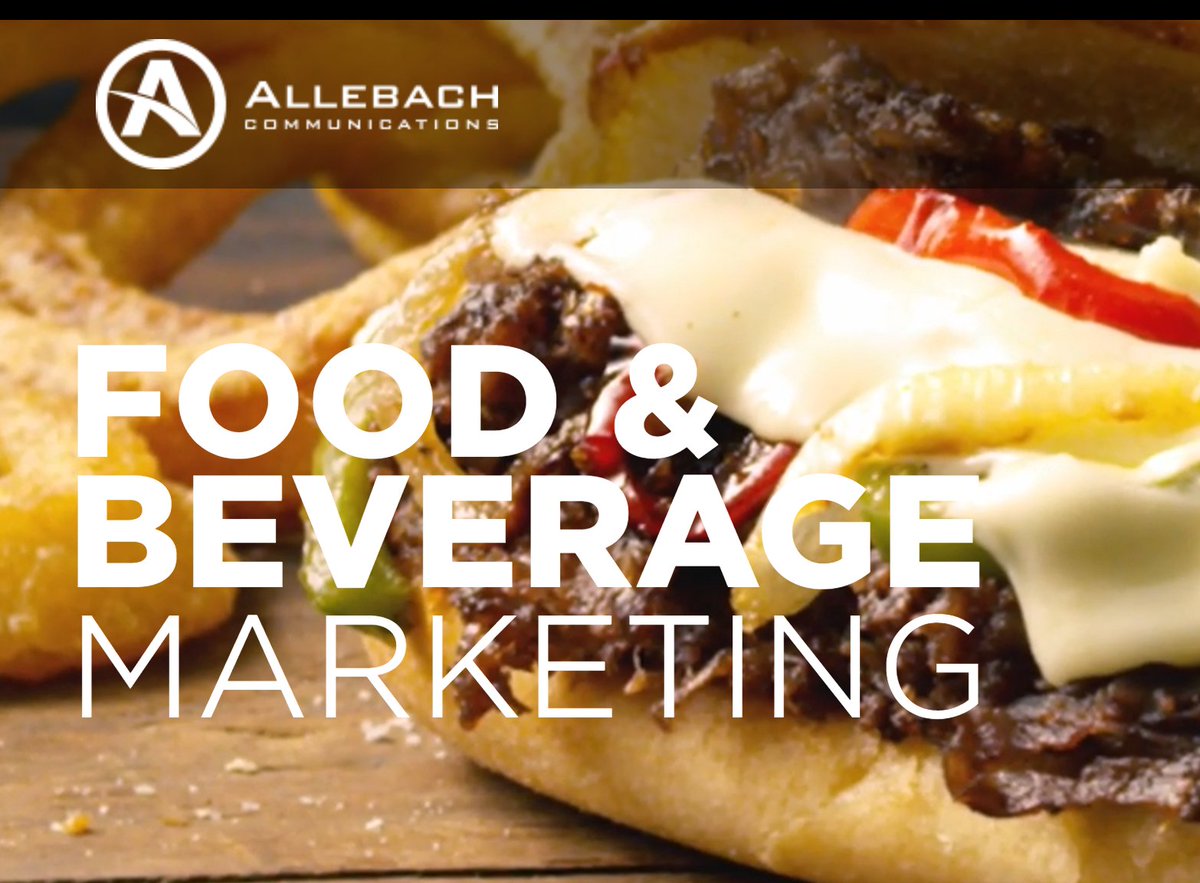 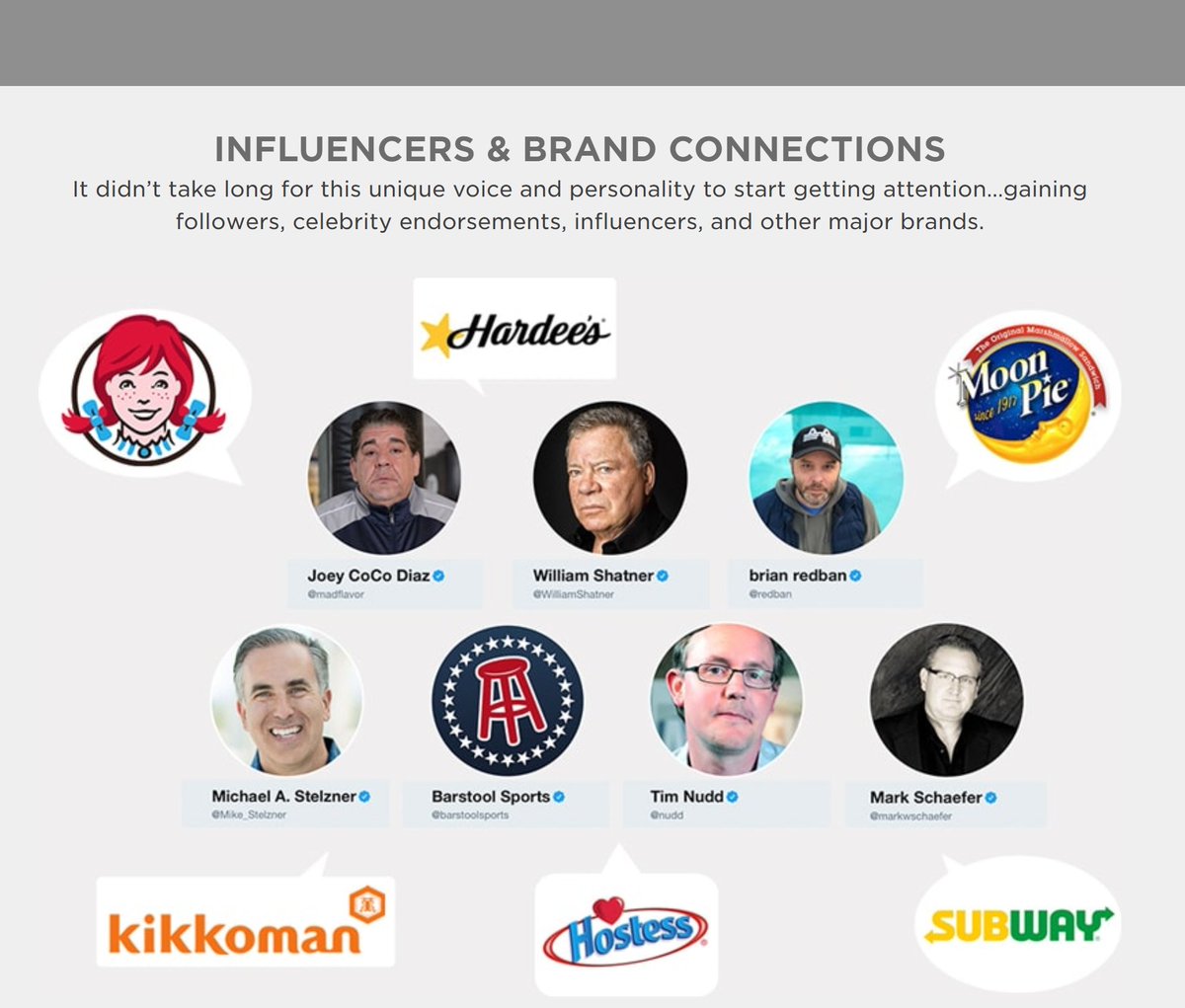 This is a key part of what's happening here. "Wow, an advertising agency is really dropping truth bombs" doesn't quite have the same cute ring to it, does it?
One ad guy runs the SU acct - Nathan Allebach - and he's *extremely* self-aware about the nature of this. It's well worth your time reading his commentary on ideology, on marketing, advertising, psychology and the nature of brand accounts on his medium: 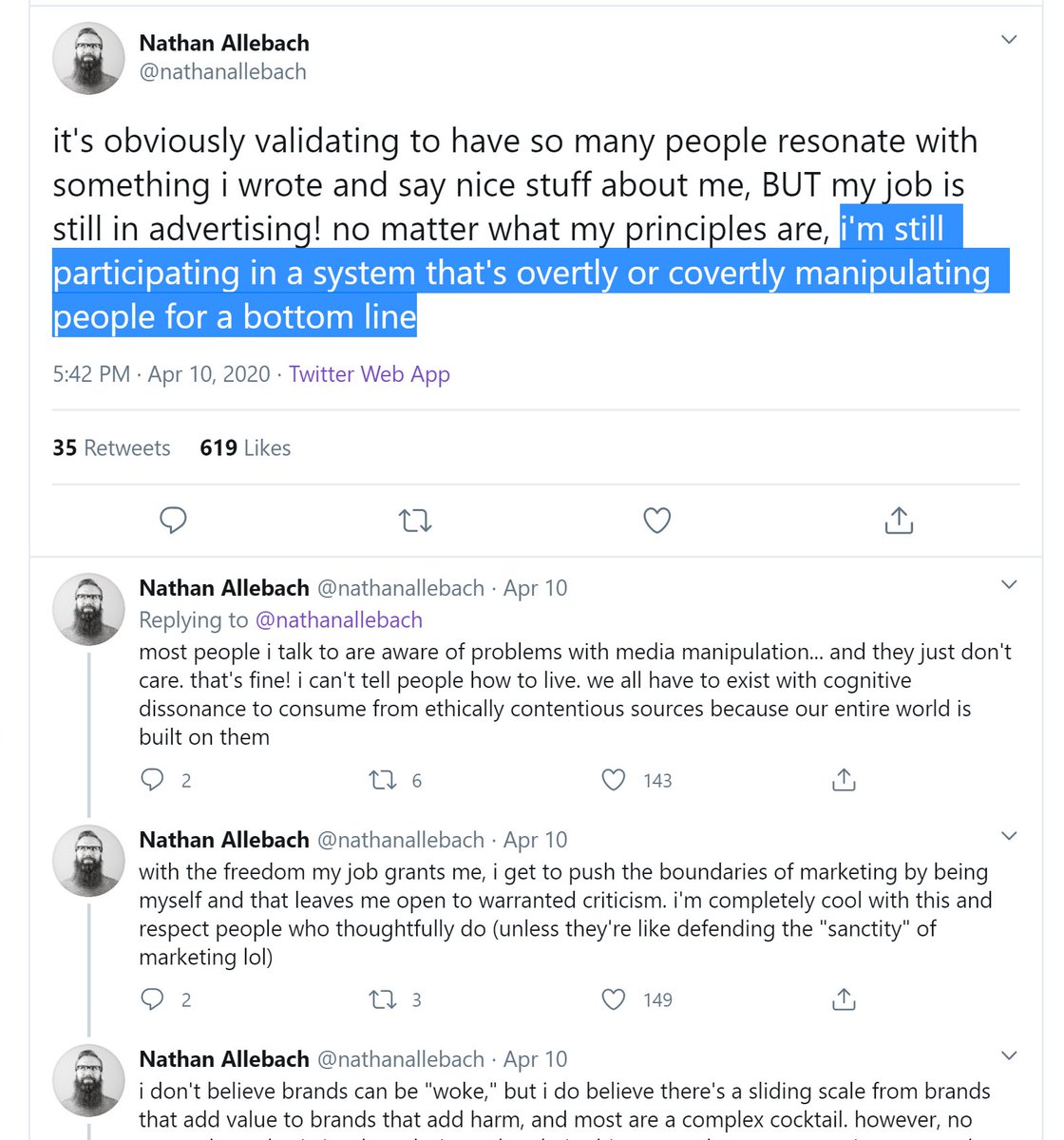 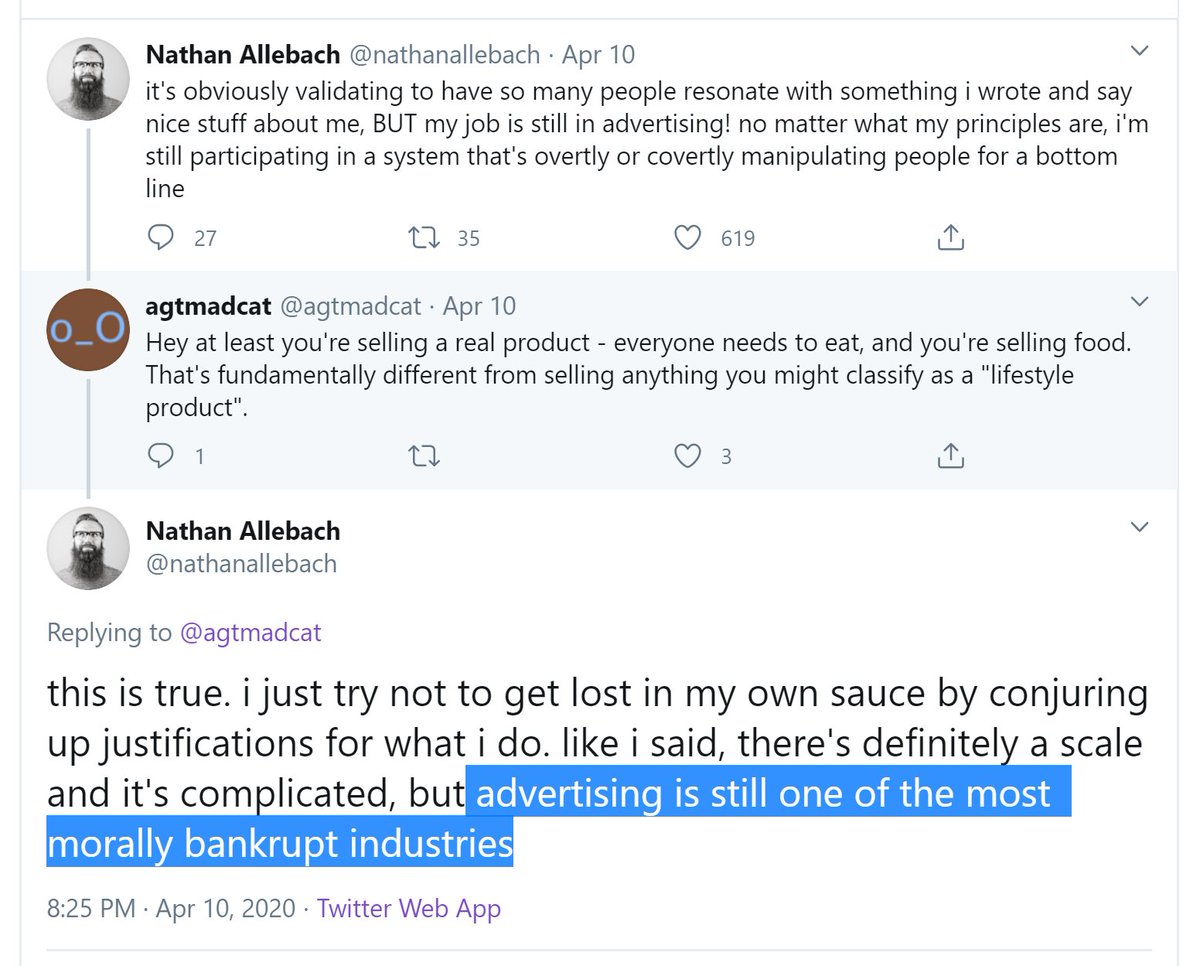 Here's my first gripe: Allebach is in a loop of self-referential millenial irony. But stating the problem doesn't excuse inaction.

He laments a lack of trust in experts, but doesn't explain how advertising agencies are participating in repairing this situation. Guess why not? 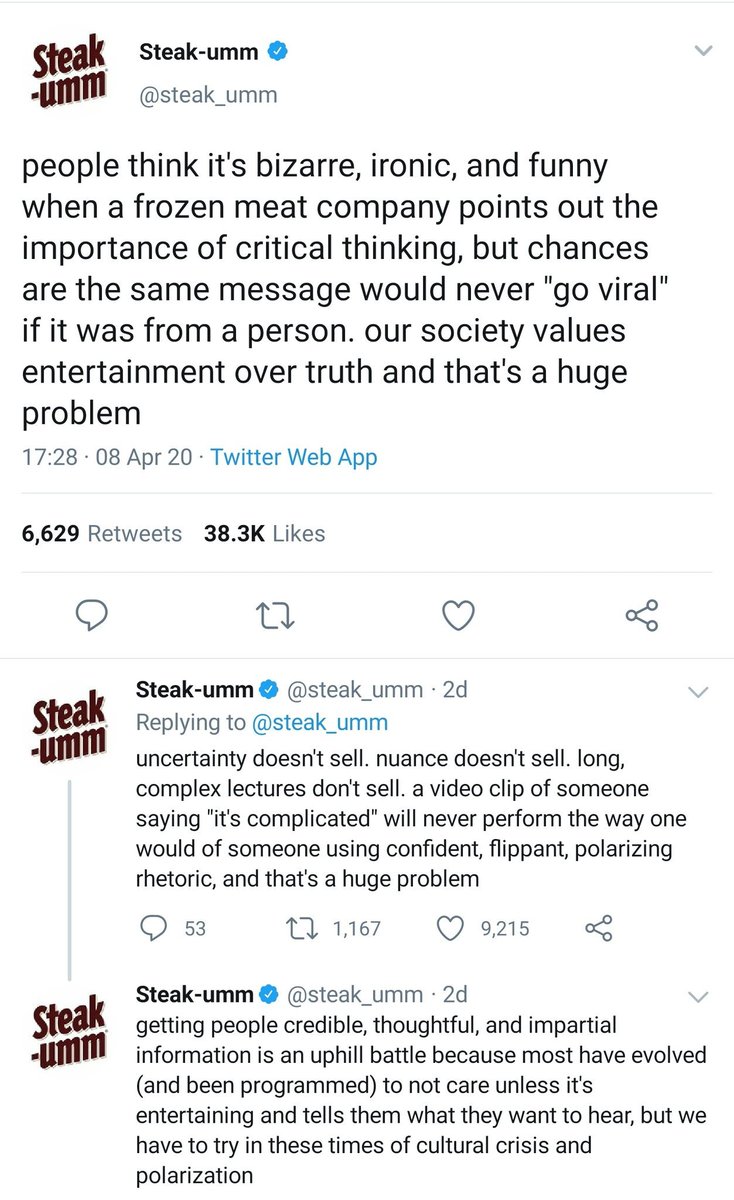 The problem here is that there is a company behind this - not a steak company, but an advertising and PR agency.

These companies have played a very large role in disinformation towards the greatest scientific scandal of our lifetime: climate change.
Dig into the best investigative journalism on climate misinformation, and you'll find PR and ad men at the heart of it. Absolutely the best, most recent bit on this is the Drilled podcast, season 3 - 'the mad men of climate change': https://www.drillednews.com/podcasts
Podcasts | Drilled News

Drilled is a true-crime podcast about climate change, and Hot Take is a media criticism podcast for the climate era.

https://www.drillednews.com/podcasts
So: to be utterly clear, there is nothing inherently wrong with meat-twitter posting genuinely insightful (though sometimes simplistic) commentary on the nature of comms, science, expertise, etc etc.

But the self-referential stuff? Even *that* is bound within ad-land rules.
Because the first thing I noticed, when digging into the account's history, is the weird focus on the COVID19 crisis, but zero mention - ever, in any context - of the climate crisis:

Putting aside the company farms and sells beef - obviously a major contributor to global GHG emissions - I think the bigger problem is that ad agencies are a major participant in the problems that Allebach laments, which he frequently and wrongly diagnoses as 'polarisation'.
As Allebach says, his industry is morally bankrupt.

But he has created a tool it can add to its arsenal: absolution of responsibility through loud self-awareness, tied with the cute gimmick of inert food products saying good things.

*That* will be adopted elsewhere. For sure.
What about when Shell's PR firm start thinking about this? Exxon Mobil? Ford? The Minerals Council?

BP are already trying on 'we're aware of what we're doing' for size. And it is, astonishingly, working quite well.
I don't want to beat up on the social media guy writing the copy. He is smart and kind.

But what good is introspection that ends with a shrug rather than an action? Other than getting our guard down?

Is this a healthy symbiosis? What about the blind spots? No one's asking.
I really don't want to kill the vibe at a time when we all need good, surprising, delightful stuff.

But in some ways this is the worst time to let our guards down. There's too much left unsaid here, and we need to say it.

The end!
A few additional bits that keep circling around in my mind like those Simpsons bits where floating heads keep repeating phrases.....
First........I keep thinking about audience. Is this account really introducing pop psychology, the science of science comms and the nature of evidence to a new audience?

I....don't think so. The people sharing their stuff? It's people like me. Blue-tick left-wing wonks.
We already accept and understand the mechanics of misinformation, or the need for experts paired with better comms and story-telling, etc etc.

It is specifically me and my 'crowd' that this methodology is targeting.
They are not selling good ways to tackle misinformation to the people who already eat Steak Umms

They are selling Steak Umms to people who already know how to deal with misinformation.

They repeat the things we find reassuring. We *love* seeing words like 'fallacy' and 'biases' 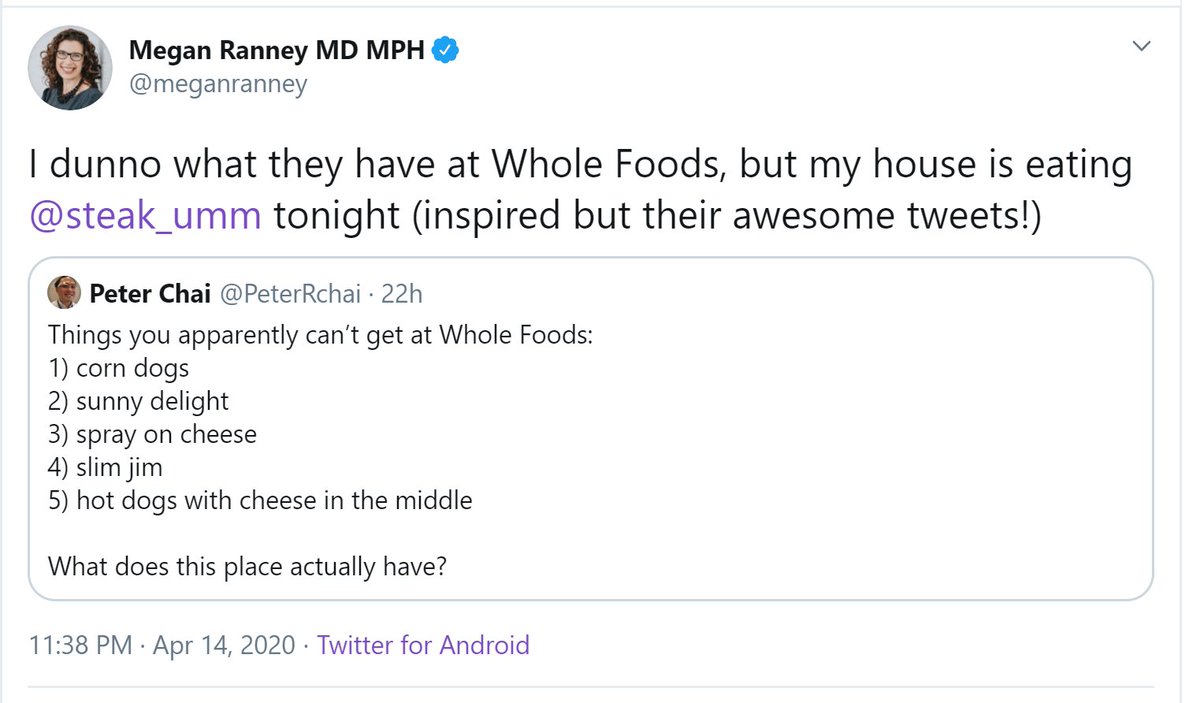 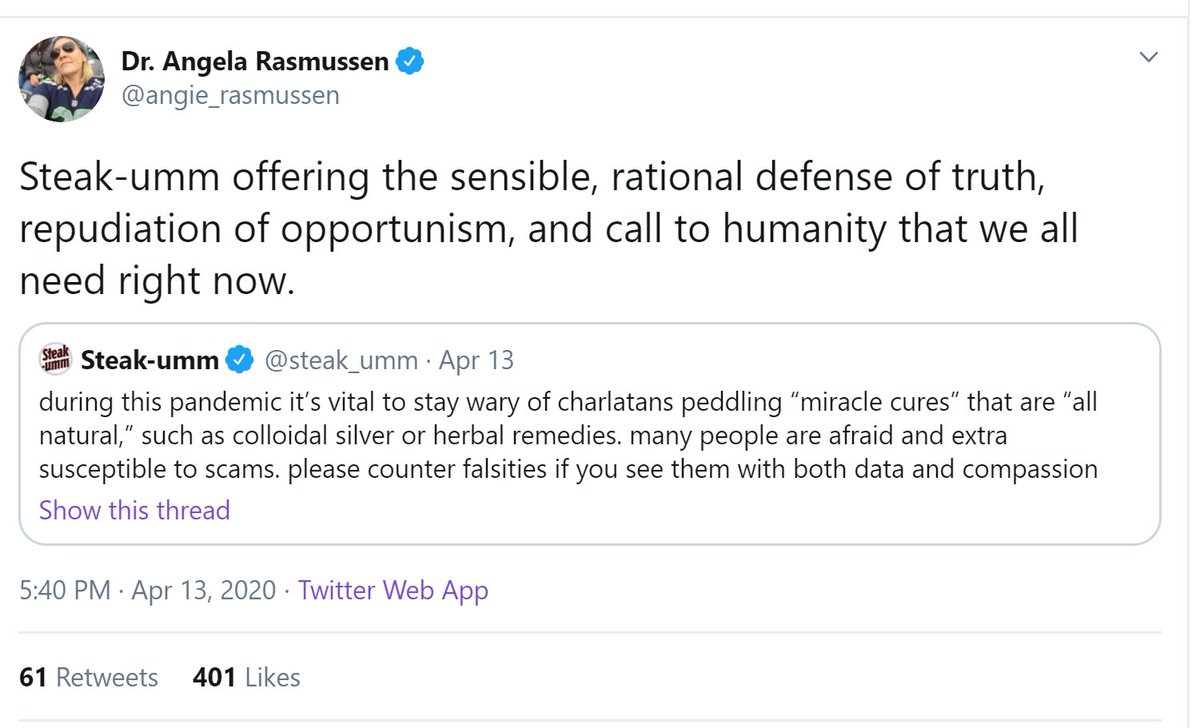 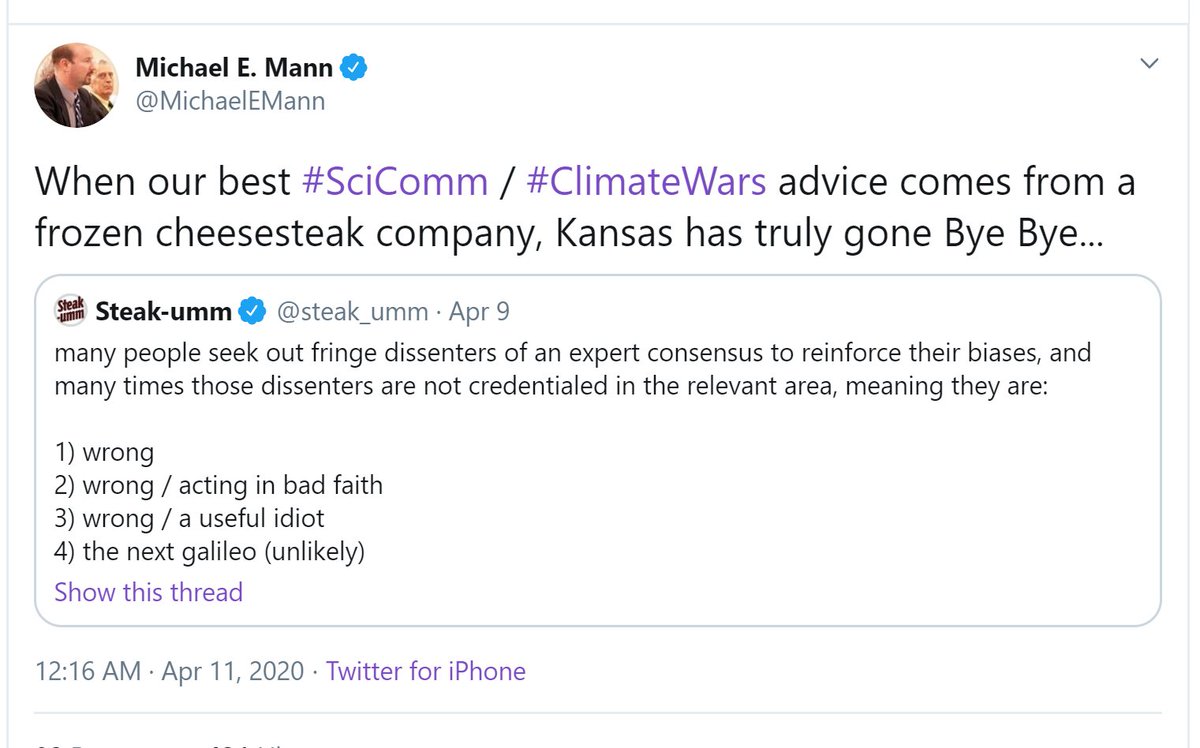 I think this is why it struck such a weirdly dissonant chord with me. Because the demographic being snapped into re-sharing / virality action by those threads was basically......Ketan. University educated, likes to talk about why people not as smart as him believe weird things...
You can follow @KetanJ0.
Tip: mention @twtextapp on a Twitter thread with the keyword “unroll” to get a link to it.