Read on Twitter
Academic freedom and the fallacy of impartiality

Here we have another academic supporter of @ReframingRussia's attack on @EUvsDisinfo: Paul Robinson - a former soldier - also opposes @StopFakingNews and the @AtlanticCouncil’s @DFRLab https://irrussianality.wordpress.com/2020/04/08/exposing-the-disinformation-industry/ 1/
Exposing the disinformation industry

In my last post I mentioned the growth of an industry of disinformation ‘experts’ who themselves spread disinformation. If anybody has any doubts about it, evidence of how this industry operates ca…

https://irrussianality.wordpress.com/2020/04/08/exposing-the-disinformation-industry/
Paul Robinson is a professor at the @UOttawaGSPIA, @uOttawa, Canada where he writes about Russian and Soviet history, military history and military ethics 2/
A quick scan through Robsinson's "Irrussianality" blog gives the impression that he is fairly reasonable and impartial: comparing and contrasting the West with Russia, criticising pro-Russian conspiracists (e.g. Helmer regarding the Skripal case) 3/
However, delve further back in time to around when Russian marines and airborne troops were seizing Ukraine's Crimea and Russian spetsnaz crossing into the Donbas, and we see a different, rather partial Paul Robinson: 4/
Robinson labels the Euromaidan Revolution of Dignity with tropes favoured by Russia's state propagandists: "fascists", "Bandera", "armed far-right groups", "sectarian" and so forth https://www.cips-cepi.ca/2014/03/04/reaping-the-whirlwind-in-ukraine/ 5/
After making an effort to sound acadmically reasonable and impartial, Robinson goes on to state "The West should recognise the legitimate interests both of Russia and of the Russian-speaking population of Ukraine" 6/
While taking into account that the situation was developing back in March 2014, no one who was following events at the time was under any illusions that Russia had zero "legitimate" interests in Ukraine. Robinson must know this. After all, he is an expert 7/
Even earlier, in January 2014, Robinson was defending the "democratic authority" of the Viktor Yanukovych regime in Ukraine against protesters and rioters who sought to "usurp" it https://www.cips-cepi.ca/2014/01/24/in-face-of-ukrainian-unrest-doing-nothing-is-the-best-approach/ 8/
In an article published in the Ottawa Citizen 9 Sep 2013, Robinson calls Russia's leaders "beacons of sanity". Regarding Syria, "Vladimir Putin speaks for the world." Evidently Russia's war against Syrian civilians is all the fault of the United States! https://www.cips-cepi.ca/2013/09/10/russia-is-a-beacon-of-sanity-about-syria/ 9/
More recently, in October 2017, Robinson delivered a talk asking "Do we still need NATO?" on the premise that the threat from the Soviet Union 'has long since disappeared' but NATO still exists and continues to expand. Another Kremlin trope https://group78.org/event/paul-robinson-do-we-still-need-nato/ 10/
Here is the video of the talk in which he says "I will not be neutral at the end of the day" (8m02s). He claims the Russians only moved missiles into Kaliningrad after NATO placed anti-missile systems in the Baltic. Another Russian trope 11/
Robinson claims Russia is not going be invade Europe (41m) "I go their [Russia] regularly" - what happend in Ukraine was a "violent overthrow of an elected government", "the Ukrainian army indiscriminately shelling its own cities ... killing hundreds of its own citizens" etc 12/
In a 2016 interview with Radio Canada International, Robinson doesn't think Canada participating in NATO exercises in the Baltic states is a very good idea because it would make relations with Russia worse https://twitter.com/RussianEmbassyC/status/750061580138708992 13/

Robinson advises realism rather than emotion. He says "the so-called Russian threat to the Baltic states doesn't really exist" - that Russia has no intention to invade or cause trouble in the Baltic states https://www.rcinet.ca/console.php?id=7561092&image=http://img.src.ca/2016/06/24/635x357/160624_xd8ac_rci-nato-baltics-marines_sn635.jpg&locale=en&appCode=medianet 14/
Robinson puts forward the Kremlin's argument that Russia would like sanctions lifted and to normalise relations with the West while at the same time keeping Crimea, which is non-negotiable https://www.rcinet.ca/en/2016/07/03/canadas-baltic-conundrum-part-2/ 15/
Canada’s Baltic conundrum – Part 2

It was, perhaps, Canada’s worst-kept military secret. And so it is probably fitting that after months of build-up and speculation, the government announcement that Canada is sending a battalion-size... 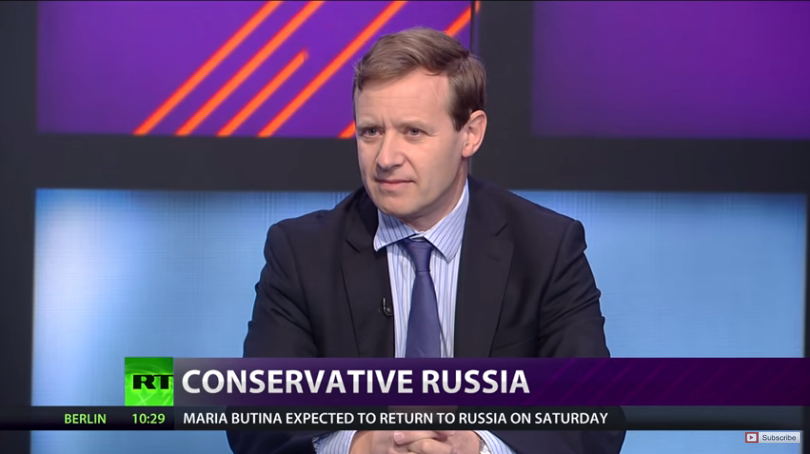 Paul Robinson's views are included in other RT_com items, including briefly in this piece by RT's Daniell Ryan (from the same FSB-handled Irish stable as Bryan MacDonald and Ivor Crotty) https://www.rt.com/op-ed/455924-time-magazine-russia-shuster/ 17/
TIME sinks to new depths of hypocrisy and propaganda with latest cover story on scary Russia — RT...

With the Mueller investigation wrapped up and interest in Russia’s alleged misdeeds against the US threatening to wane among the masses, mainstream media has decided to widen the net and refocus...

Moscow’s engagement in the Middle East is about more than simply its national interests. It’s about sending a message that the rules of the game have changed; that the unipolar world is in its...

To understand Vladimir Putin, turn to the writings of Fyodor Dostoyevsky. That’s the latest way to prove you’re in the know about the Russian leader and his deep, dark soul.

https://www.rt.com/op-ed/373753-dostoyevsky-putin-russia-dark-soul/
And in this piece by RT's Bryan MacDonald (or Brian McDonald before his handlers altered his name) https://www.rt.com/op-ed/448320-western-media-rewards-fake-news/ 20/
In Western media, publishing fake news about Russia is a good career move… with no consequences —...

Fighting "Russian disinformation" in the West has become a lucrative business. But, in reality, you're far more likely to encounter deceitful agitprop directed at Russia.

https://www.rt.com/op-ed/448320-western-media-rewards-fake-news/
Finally, whether we are academics or not, we must recognise that we are all to some extent conflicted and declare accordingly. Paul Robinson and those investigators at @ReframingRussia are no different

Transparency. Academic freedom depends on it

21/21 [Weps]
You can follow @GorseFires.
Tip: mention @twtextapp on a Twitter thread with the keyword “unroll” to get a link to it.