Read on Twitter
Who's going to tell the premier that being open-minded and responsive to public feedback, even when negative, is also the work of democracy?

Or that working democracy does NOT = jamming omnibus legislation through the process in 4 days? 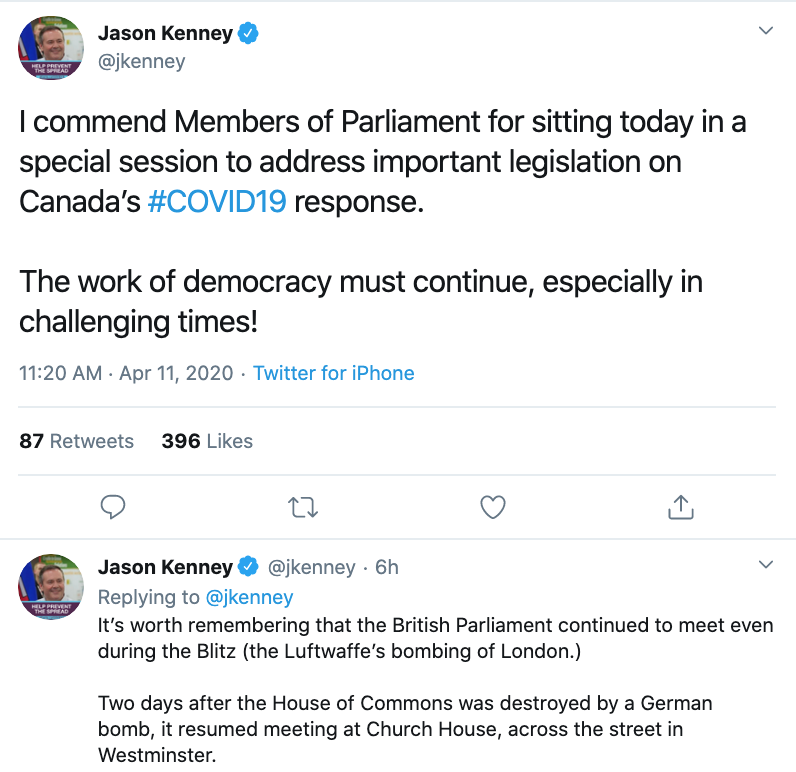 Or that constitutional conventions are part of democracy here, too, and so failing to respect them undermines our democracy? (cough individual ministerial responsibility means those who shout at constituents should resign cough)
Or that dealing with a crisis means putting other goals, whatever their motivation (ideological or otherwise) on the back burner until the crisis is at least fully managed, if not passes?
Or that a democratic response to a medical crisis would likely NOT involve attacking front line health workers from physicians to, well, all the other public sector workers in health care?
Or that a key part of democracy is the rule of law, which means that everyone has to follow those laws, no matter who they are, what their motivation, or even if they find the laws too pesky to be bothered with?

Campaign and party finance are the laws that spring to mind here
Or that democracy also involves public space, so that "modernizing" parks to minimize their usefulness to the public, or to minimize public access is a tough democratic sell?
Or that democracy includes freedoms of association, and that in Canada, that requires governments to respect collective bargaining rights and processes?
Or that the equality rights that democracies rest on require equalizing programs such as education, health care, and child care?

And that in a knowledge economy like ours, those programs include access to high quality post-secondary education?
Or that democracy means holding to these principles regardless of WHICH PARTY IS IN OFFICE?

It's not lost on me that the premier is parroting the federal opposition here, when there's almost complete reticence to listen to any opposition in #ableg
Or that freedom of expression means that, often, critical voices cannot and should not be dismissed as out-partisans you can just ignore b/c you don't like them?
I could keep going, but I need to refresh my cup of tea.

But seriously, if someone wants to play the "but democracy!" card, they need to walk the walk before they can talk that talk.
You can follow @MelaneeLThomas.
Tip: mention @twtextapp on a Twitter thread with the keyword “unroll” to get a link to it.