Read on Twitter
A brief dinosaur twittertorial from memory on “STENOSIS”
Stenosis is the narrowing of a vessel, lumen, foramen or tunnel. It can be congenital, formative and acquired.
Stenosis per se is not a condition, but has the potential to produce symptoms depending how it affects contents
If the narrowing of stenosis produces symptoms different condition names can be given to the symptom presentation.
Ie stenosis of blood vessels can lead to symptoms of coronary heart disease, some in the spine can lead to radicular symptoms.
Stenosis is thus an observation that is abnormally narrowed compared to a normal average.
If we talk about spinal stenosis, there are several foramina that can be narrowed by bony growth or soft tissue hypertrophy, buckling or encroachment.
Common ares of narrowing can occur in the vertebral foramen which forms the boney protion of the spinal canal and contains the cord down to L1/L2 and then the Cauda Equina, the intervertebral foramen which contain DRG and exiting rami,
The lateral recess which contains decending lumbar nerve roots.

One can postulate that any narrowing on the central canal via bone or soft tissue is a stenosis. This may occur at a single level as in a disc herniation, bulge or protrusion, a bony growth from degeneration,
Or any other space occupying lesion in the central canal.
Thus a disc herniation, bulge or protrusion can clearly be labeled as acquired stenosis. Multilevel disc bulging that occurs in DDD is common as we age and can cause stenosis with degenerative spondylolisthesis.
Again none of this needs to produce symptoms.

Lateral intervertebral stenosis occurs from osteophytic growth like in the case of the cervical spine where uncovertebral bars are common, and with Z-joint arthropathy in both cervical and lumbar spine
Clinically once any type of stenosis produces symptoms it will produce a typical pattern base on onset, duration, nature and type of symptoms area of the spine involved and age of the patients.
Using the boiling frog hypothesis is a useful thought model. Sudden disc herniation may produce acute symptoms of low back and even buttock and thigh pain, this is sudden onset acquired stenosis commo in young adults, you may not have thought of disc herniation a a stenosis.
I will post the boiling frog hypothesis.
Older adults may develop slow onset insidious low back pain and bilateral lower leg symptoms related to walking. This is the classic presentation due to degenerative spondylolysthesis and DDD causing LBP and neurogenic claudication
I wa slucky to train Dr Richard Porter’s PT he wrote a landmark paper with Dr Miller on Spinal Stenosis, easy to find in a google search. DDD and degenerative Spondylolisthesis causing neurogenic claudication need to be differentiated from PVD causing similar bilateral lower leg
Symptoms, Deiks cycle test is. Recommended differential test.

Porter described the Simian stance and walking posture (ape like walking) this posture is related to trying to maximize lumbar flexion and minimizing hip extension when walking. In these patients flexion may be....
The treatment direction of choic, but not in all cases.

The treatment of acute disc herniation with or without sciatica is dependant on the directional preference, see Laslett’s work , it is important to remember technically disc herniation and extrusion both produce stenosis.
Foraminal stenosis is again acquired over time or suddenly as in WAD when an inflammatory swelling can produce a postential borrowing of the IV foramen. commonly degenerative changes in the Z-joints & uncovertebral joints produce bony and soft tissue projections into the foramen
Clinical symptomatic presentations are often predictable as symptoms of DRG or nerve ramus impingement are produced with movements that typically narrow the dynamic IVF.
It is also important to remember that Cauda Equina syndrome is a form of central canal stenosis always below L1/L2 *end of cord in central canal. CES is often a result of sudden large central disc herniation causing single level stenosis, symptoms ar +or- saddle anesthesia, ....
Genital anesthesia, loss of genital function and or anal reflex, retentive incontinence of bladder and bowel incontinence, acute single or bilateral sciatica with signs of progressive neurological symptoms of progressive weakness, reflex loss and numbness. This is an emergency.
In conclusion this is one long ass old man ramble. But for the nice man who accused me of being a coward and asking if I had any experience with disc herniation and stenosis diagnosis the answer is simply YES. I’ll post the boiling frog below
Ps sorry this is so long hope it makes sense to someone. 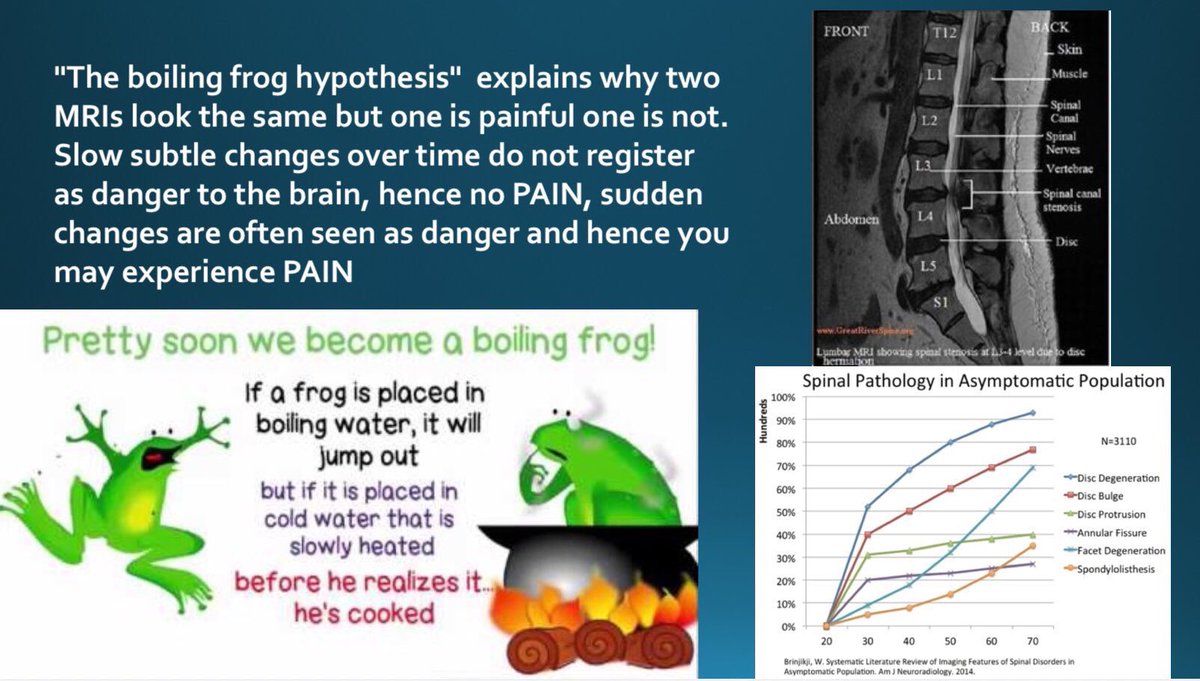