Here's the transcript of the full exchange 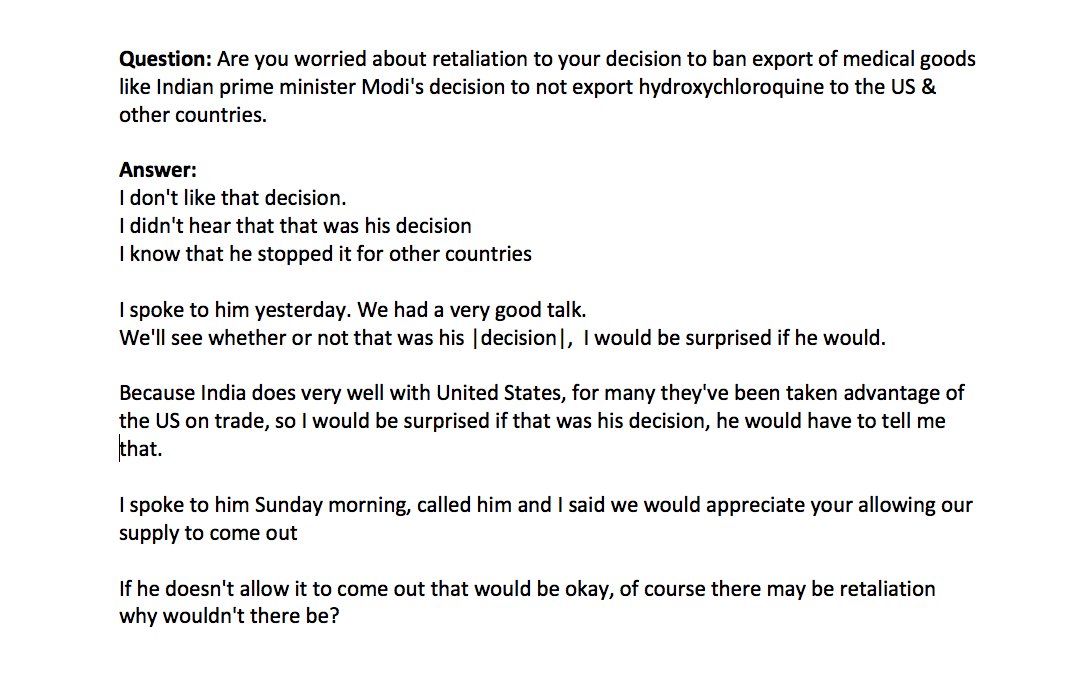 Are you worried about retaliation [he is asking Trump about other nations' retaliatory actions] to your decision to ban export of medical goods like [his example] Indian prime minister Modi's decision to not export hydroxychloroquine to the US & other countries? [the media...
....person clearly implies here that India refused Trump's request]

I didn't hear that that was his decision [clearly....
...stating that he was not told about India's decision yet]

I spoke to him yesterday. We had a very good talk.

We'll see whether or not that was his |decision|

I would be surprised if he would [here it is 100% clear that Trump took from the question....
....that India has effectively refused his request]

so I would be surprised if that was his decision [to refuse US request], he would have to tell me that [clearly implying that India refused & he was yet to receive communication from India about the refusal].
I spoke to him Sunday morning, called him and I said we would appreciate your allowing our supply to come out [Trump gives context to what happened on the previous day and he says he appreciates if India acts on his request to allow the supply].
If he doesn't allow it to come out [as understood from the question that India has refused his request] that would be okay, of course there may be retaliation why wouldn't there be [Trump now clearly implies that his understanding is that India has refused his request]
SUMMARY

The media person bungled the question. Implied things he has no up-to-date knowledge about. Gave off the impression that India refused Trump's request which he made just a day prior.

Not only Trump didn't know that India allowed his request, but he has specifically learnt from the stupid question that India has refused his request.
Watch the full exchange in it’s entirety
Please share this thread. India’s relationship with the US shouldn’t have to suffer because a media personnel was incompetent & entire media did a cycle on outrage journalism for clickbaits polluting people’s minds.
You can follow @ShivajiLokam.
Tip: mention @twtextapp on a Twitter thread with the keyword “unroll” to get a link to it.