Read on Twitter
In 1939, Hodgkin & Huxley conducted the first, long-awaited recording of an intracellular action potential.

Shortly after, Hitler invaded Poland, and Hodgkin & Huxley were forced to leave the lab and join the WWII effort. 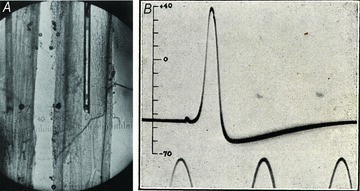 Of course, having to leave the lab after the first glimpse of an action potential was deeply frustrating.

Hodgkin writes about it in his autobiography, "Chance and Design: Reminiscences of Science in Peace and War." 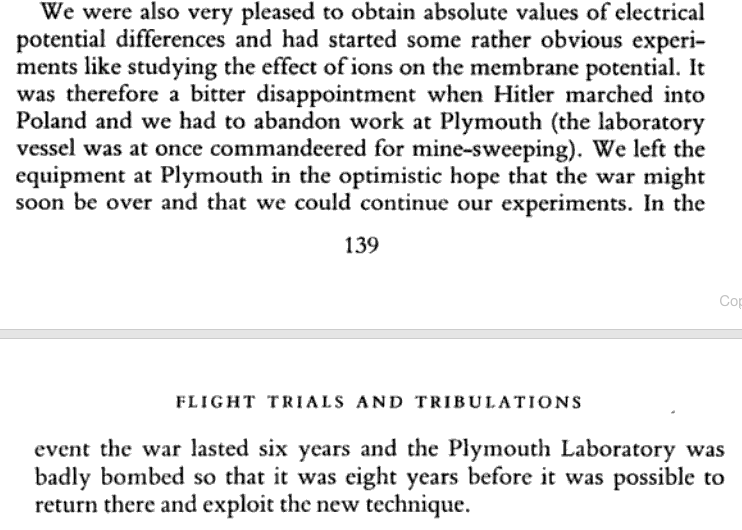 During their separation, both Hodgkin & Huxley worked on war-related efforts.

Somewhat relevant to now, Hodgkin helped design oxygen masks for pilots. He also worked on aviation medicine, even subjecting himself to a rather intense decompression chamber.

Hodgkin & Huxley were reunited 7 years later, and shortly after began their parade of papers to illuminate the ionic basic of the action potential.

Science can and will persist, even if interrupted by a global crisis. In the meantime, we might need to redirect our efforts.
Worth mentioning that Detlev Bronk (of Adrian & Bronk, 1929, first single-cell recording) also shifted his focus to aviation medicine during WWII.

As a part of this research, Bronk published this rather unique report in 1946 which includes descriptions about the impact of oxygen on neurons as well as a rather philosophical discussion about the intersection of technology & the human body.

You can follow @analog_ashley.
Tip: mention @twtextapp on a Twitter thread with the keyword “unroll” to get a link to it.