Read on Twitter
Wasn't for sure if I should say something but have to.

I saw tons of people going after @elonmusk for the ventilators that Tesla bought. They said he got CPAP's and they wouldn't help. Many problems with this, & those tweets might kill someone.

...
First is terminology, CPAPs are a type of ventilator. Any machine that aides in breathing is a ventilator.

The ResMed devices Elon bought were not CPAP but what are called BiPAP. These are better than a normal CPAP, they have an exhaust pressure to them like the higher...
...end ventilators. The big difference is the high end ventilators are used for intubation, the BiPAP like a CPAP uses a face mask. These have been approved for use in COVID-19 from the FDA, and CDC.

Now they do have an issue because of those masks.

...
If there is a leak anywhere on the side of the mouth, it sprays the air of the patient into the room they are in, or ambulance. A filter can by added to the exhaust tube but the leak is still an issue. So if the High End ventilators are available BiPAP shouldn't be used.

...
If they need them though they should use them.

This is more a problem that some areas don't have the right PPE. Remember Elon is also giving out N95 masks what should help against some of this.

What is my worry? Simple, those that were attacking the CPAP machines being used...
….might make patients not want them. That could kill them, & make the higher end ventilators more in demand.

What Elon bought would have just sat in a warehouse. Now they can be used. He bought up to 1000 of them & is trying to get them where they are needed. That's good.

...
Because some high profile science accounts just have to rip on him, saying he should stay in his lane, they got out of their own lane. I know because I fell for it as well.

Look, people know me, I will call out @elonmusk to his face. I did at the beginning of March.

...
But what was spread by others could really harm people. On this, Elon is helping. Other things with COVID response can be debated later.

Please make sure people know that CPAP and BiPAP machines are ok to use with those around with proper PPE.

...
Again I know this might hurt me but if I don't do it, well, people might die.

Difference of CPAP and a BiPAP
https://www.alaskasleep.com/blog/bipap-therapy-bilevel-positive-airway-pressure

Interview with ResMed about Tesla
https://www.cnbc.com/2020/04/01/tesla-could-help-make-ventilator-batteries-resmed-ceo-mick-farrell.html

This page lists current Emergency Use Authorizations that make available medical devices to diagnose and respond to public health emergencies.

https://www.alaskasleep.com/blog/bipap-therapy-bilevel-positive-airway-pressure
This article just came up and it is really good explaining about these machines, and how they can be used. https://www.msn.com/en-au/news/techandscience/elon-musks-bipap-machines-may-be-better-than-nothing-at-least/ar-BB126fGz?li=AAF3IbP
Elon Musk's BiPAP Machines May Be Better Than Nothing, At Least

Tesla and SpaceX CEO Elon Musk said he’d be sending desperately needed “FDA-approved ventilators” to hard-hit hospitals across the nation dealing with the coronavirus crisis—but they haven’t been the...

https://www.msn.com/en-au/news/techandscience/elon-musks-bipap-machines-may-be-better-than-nothing-at-least/ar-BB126fGz?li=AAF3IbP
More updates on this, so adding to this thread.

@elonmusk stated he gave all specs and models to the health centers and they chose the ones they wanted. They knew they were BiPAPs. He also has invasive ventilators for the worst patients. https://twitter.com/elonmusk/status/1245800685494366208?s=20

Also @elonmusk has been giving out invasive ventilators. This is important because states that are trying to order and get them are having their supply taken by the Feds. Many pictures of them out.

This is my favorite tweet on the ventilators. Because this medical group refers to it as a respirator. It shows how the naming of these devices are weird. Some before were called respirators but now that is normally for a fitted mask like a N95 https://twitter.com/HMHNewJersey/status/1246532317922889728?s=20

This is some of the coolest news though. First @Tesla is making their own ventilators using parts from their cars, to not hurt the supply chain for the other manufactures. It is beautiful. I am super impressed with this design. https://twitter.com/Tesla/status/1246940326838718464?s=20

Yet we are still not done. @elonmusk lso has @SpaceX working on this as well. They will be making proportional solenoid valves for @Medtronic. https://twitter.com/elonmusk/status/1246279106351816704?s=20

Alright, and the final thing on this is I know some still don't get the BiPAPs or CPAPs can be called ventilators. But don't @ me on this. 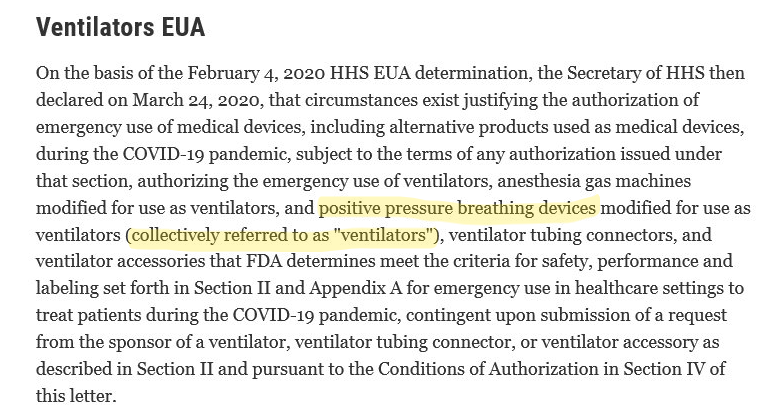 You can follow @Supernova_Style.
Tip: mention @twtextapp on a Twitter thread with the keyword “unroll” to get a link to it.