Read on Twitter
"How productive a community is in utilizing [land] has a direct bearing on the community's wealth and its capacity to endure."
@clmarohn in @StrongTowns, pg. 139. 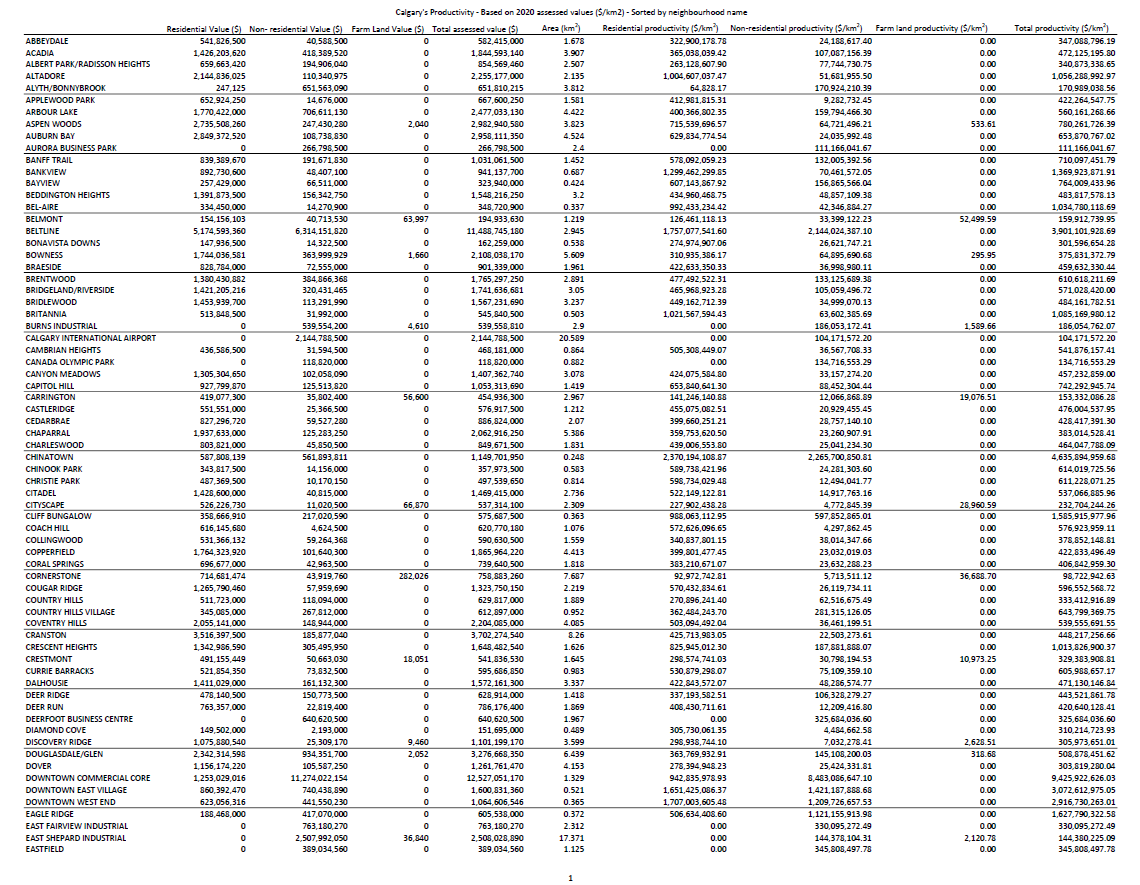 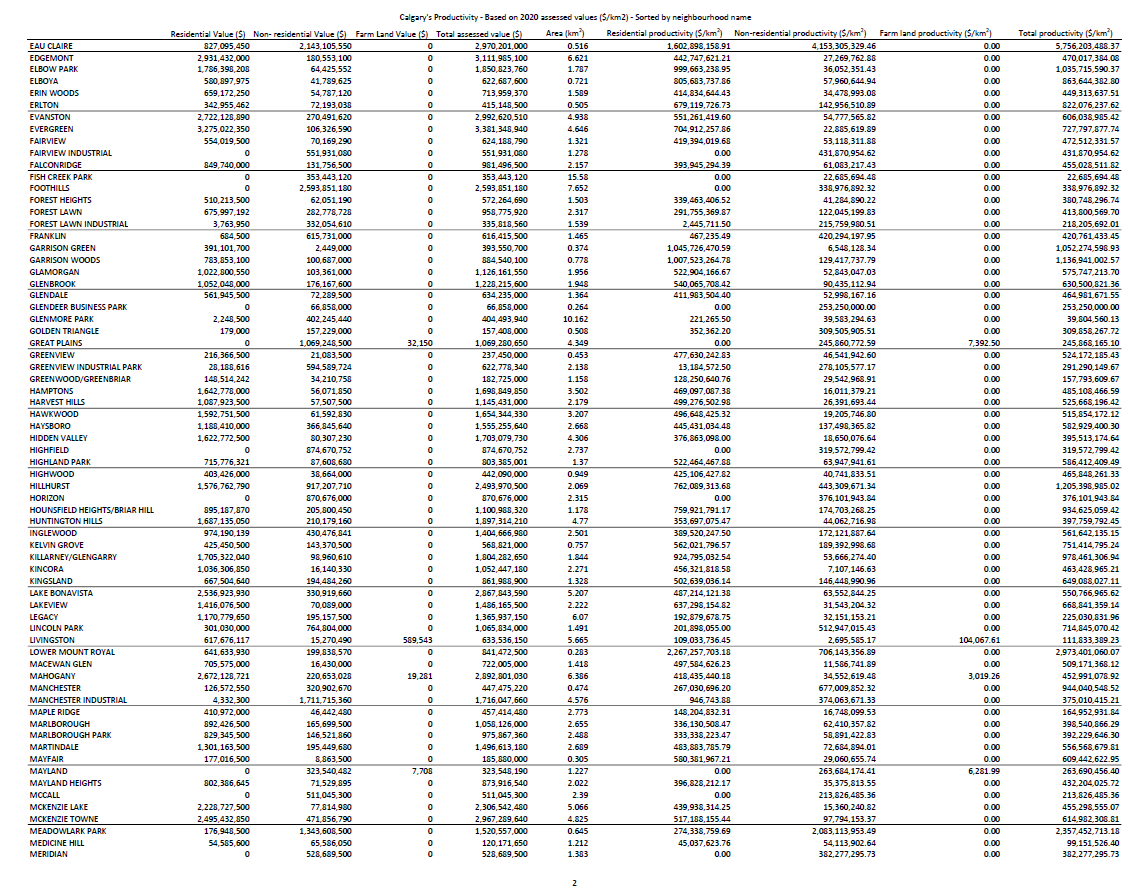 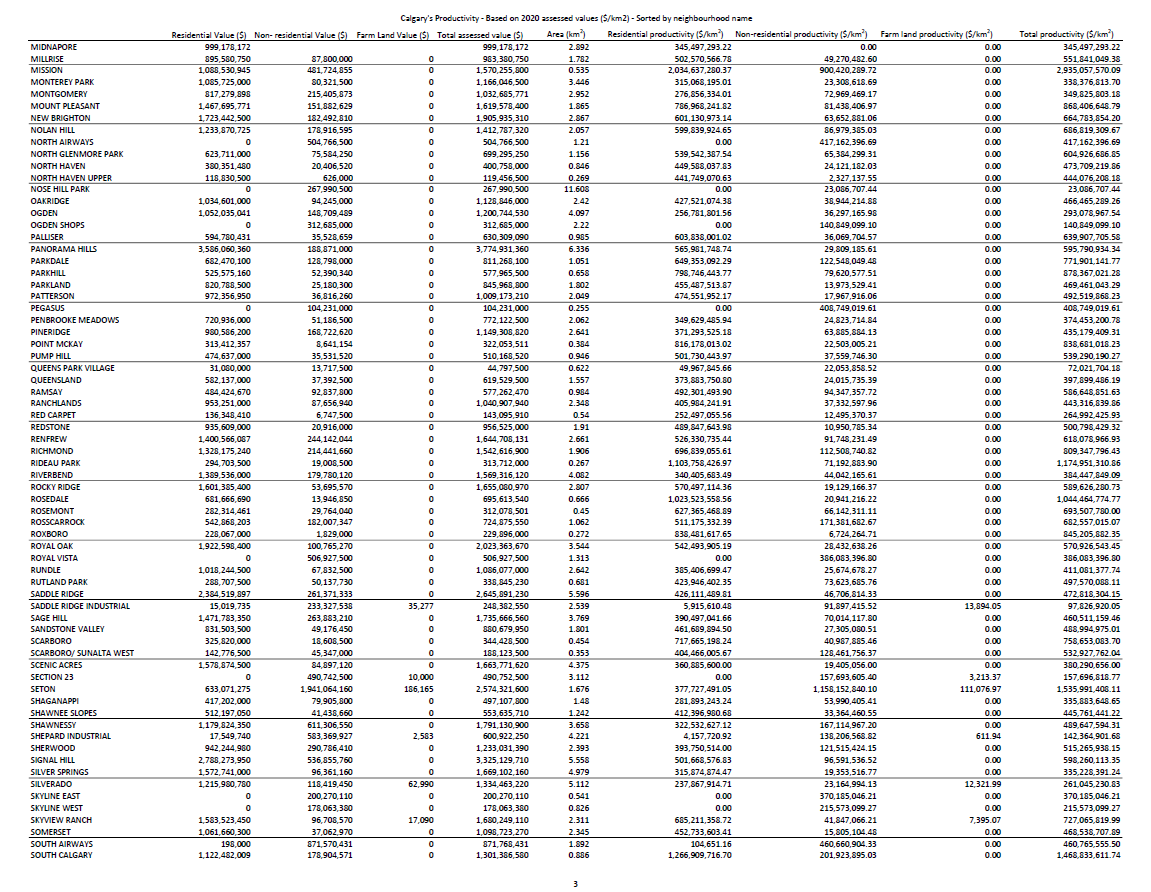 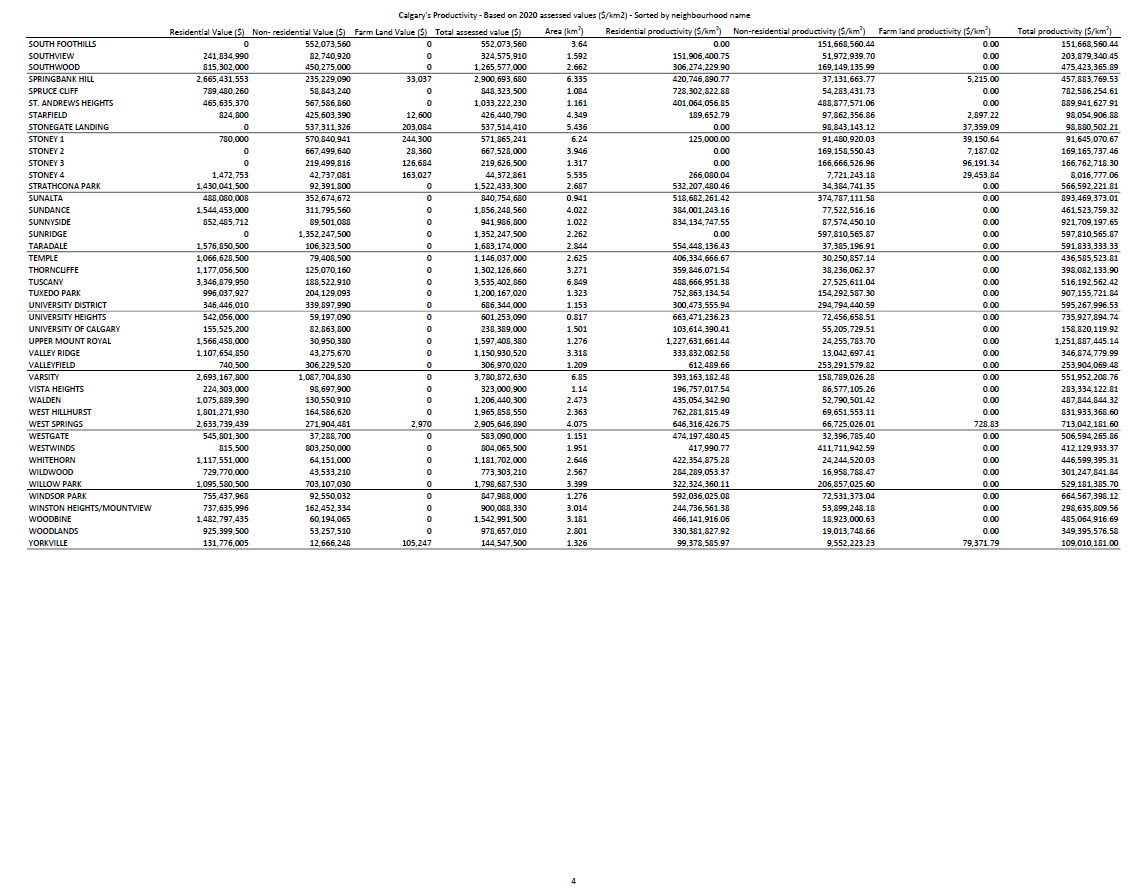 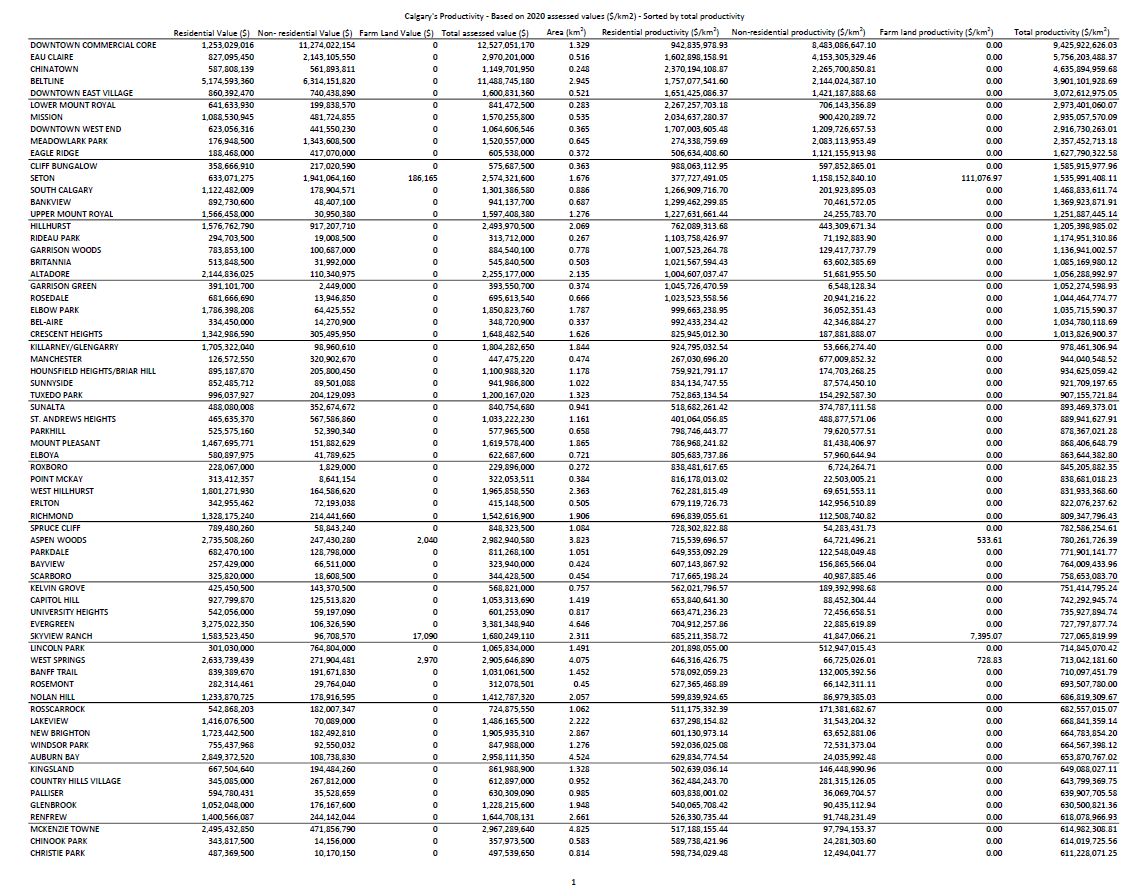 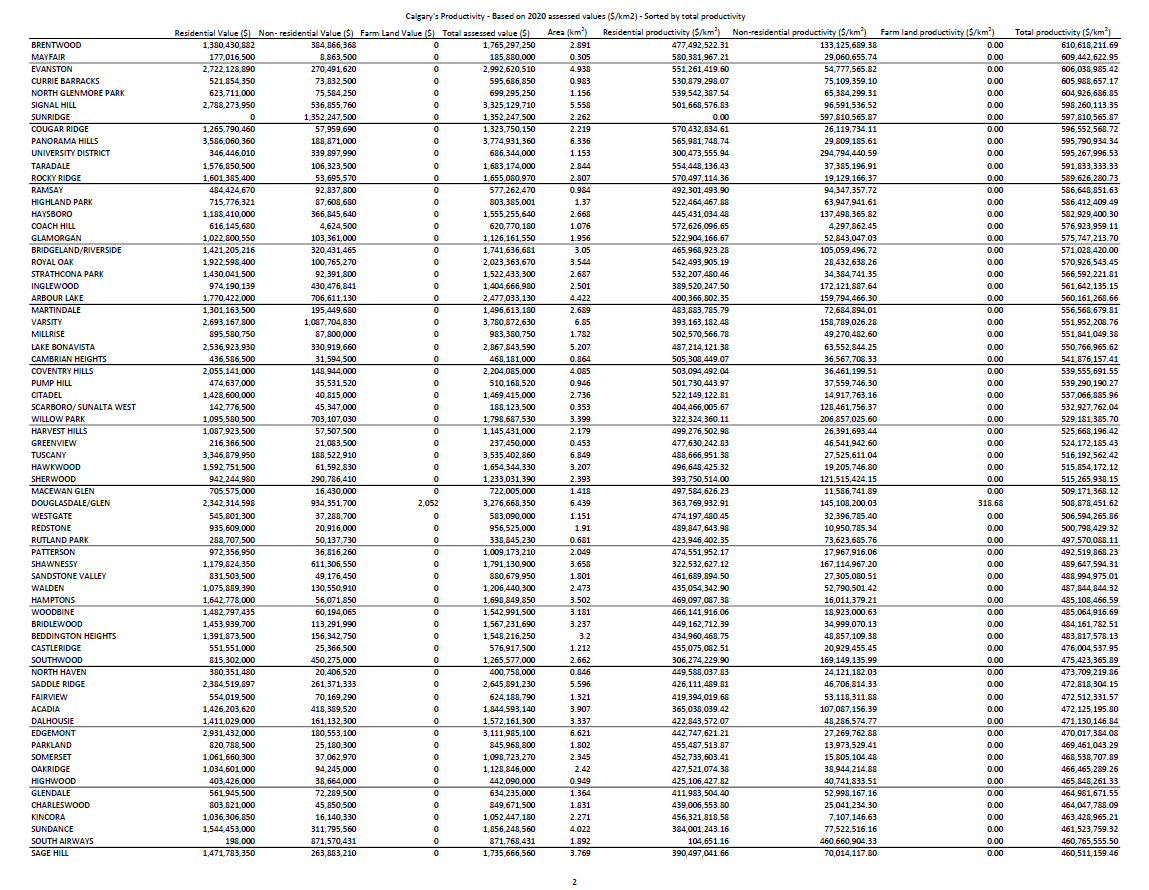 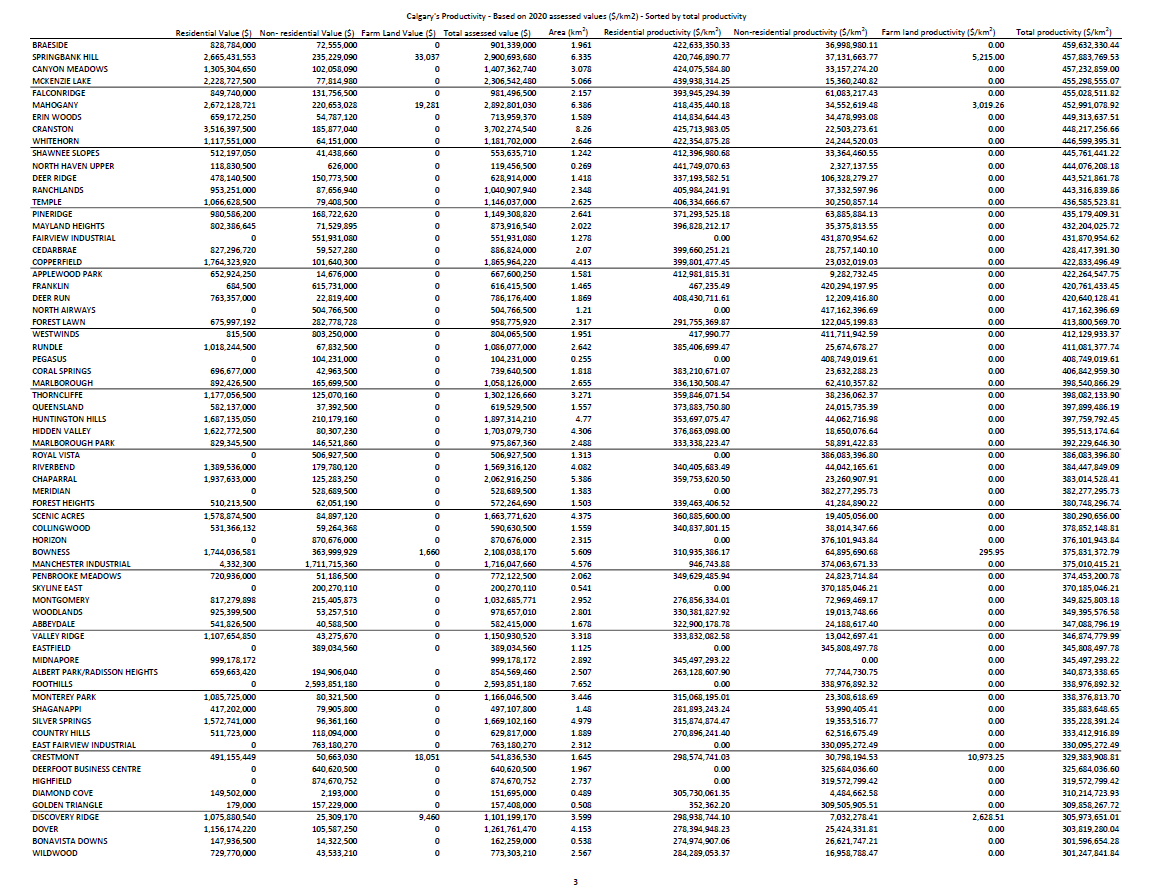 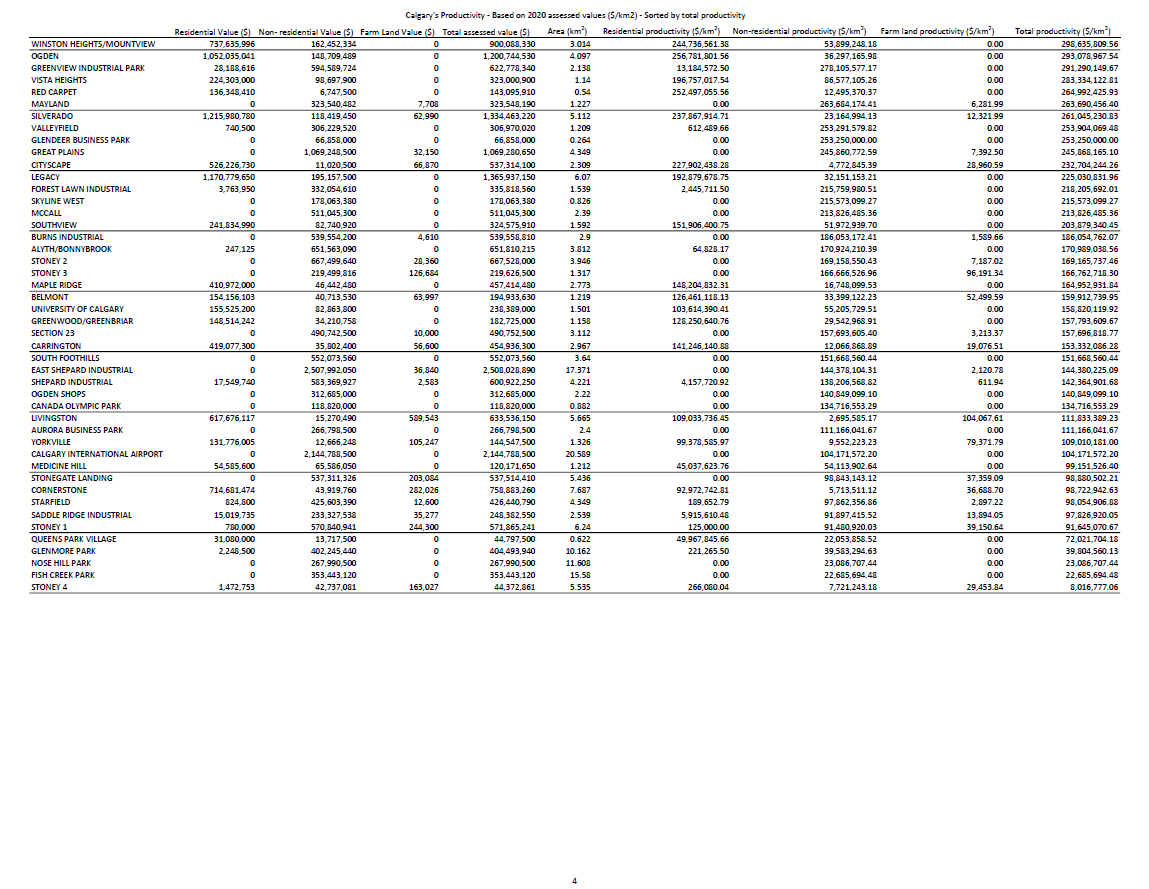 If you want to know about the process, @Chealion sent me a spreadsheet with each neighbourhood's area (thanks!). A friend put this data set in python to add up the value of each property in each community. I combined the two. https://data.calgary.ca/dataset/2020-Assessed-Property-Values/qwrb-nw8u
2020 Assessed Property Values | Open Calgary

The assessed values of residential, non-residential and farm land properties in Calgary. The properties in this dataset consist of Calgary lands that have a registered parcel at Alberta’s Land Titles...

https://data.calgary.ca/dataset/2020-Assessed-Property-Values/qwrb-nw8u
It's not perfect for neighbourhood comparisons. For example, Renfrew stretches to the west side of Deerfoot Trail, which adds the science centre's value ($70m) but adding that much area lowers its productivity. Similarly, Bridgeland includes the zoo, and probably Memorial Drive.
It's only half the math. It lacks costs. To endure, cities must maintain their infrastructure. Marohn suggests "a target ratio of private investment to public investment of somewhere between 20:1 on the risky end and 40:1 on the secure end." https://www.strongtowns.org/journal/2015/3/29/the-density-question
The Density Question — Strong Towns

https://www.strongtowns.org/journal/2015/3/29/the-density-question
For Renfrew, that means our ~$1.6B of private investment would support $40-80M of public investment every generation. Is the once in a generation cost of fixing or replacing Renfrew's streets, curbs, sidewalks, pipes, and service connections less than $40-80M? I don't know.
Nor do I know the operational costs for clearing snow, cleaning streets, maintaining parks, or running bus service in Renfrew. But I know Renfrew is one neighbourhood in Calgary that is allowed to become more productive in hopes of covering its own costs.
Most of Calgary's zoning doesn't allow higher productivity than one home/lot (R-1). When neighbourhoods can't be more productive, their only path is decline. Yet, their infrastructure will still be our liability. And the City will need stable funds. It's quite the predicament. 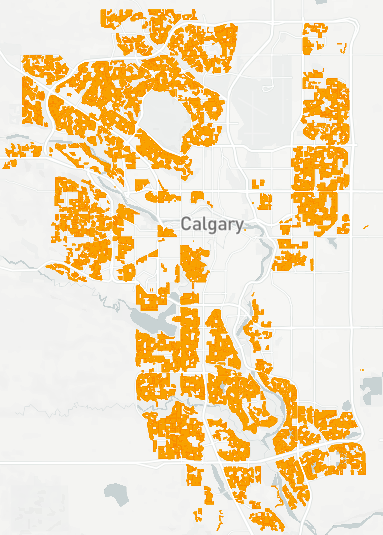 Yes, several R-1 neighbourhoods are in the top 20 for productivity, but they increase their productivity by having a large mall or being 'exclusive enclaves.' Because there's a finite demand for large malls and luxury homes, in the tech bros' words, "that doesn't scale."
How can we increase our productivity?
Allow the next incremental step as-of-right.

Should it only be adding a suite or becoming a duplex?
Should it be more, like a three- or four-plex?

We can debate the size of the next step, but it needs to be possible. https://www.strongtowns.org/journal/2019/6/10/is-strong-towns-nimby-yimby-or-what
Is Strong Towns NIMBY, YIMBY, or What? — Strong Towns

Some YIMBYs don’t like Strong Towns and claim we are anti-development NIMBY. Yet, NIMBYs hate us because we insist neighborhood evolve, adapt, and change. What’s going on here?

https://www.strongtowns.org/journal/2019/6/10/is-strong-towns-nimby-yimby-or-what
Some people will think, "now's not the time."
But:
1. Staying at home is a great time to make spreadsheets.
2. Provincial law forbids the City from going into debt to pay for operations. We're going to need to talk about how we, as a city, adapt.
3. When will be the right time?
In Calgary, we can’t predict next week’s weather, next month’s oil prices, or next year’s Flames’ season. In uncertain times, we need to be able to adapt. Allowing more adaptability and more productivity will allow our city to become more financially stable.
Yes, productivity isn't everything:
When the Stranger says: “What is the meaning of this city?
Do you huddle close together because you love each other?”
What will you answer? “We all dwell together
To make money from each other”? or “This is a community”? https://dappledthings.org/15859/strong-towns-a-bottom-up-revolution-to-rebuild-american-prosperity-by-charles-l-marohn-jr/
Strong Towns: A Bottom-Up Revolution to Rebuild American Prosperity by Charles L. Marohn, Jr.

Strong Towns: A Bottom-Up Revolution to Rebuild American Prosperity by Charles L. Marohn, Jr. Wiley, 2019; 240 pp., $25.00Review by Barbara GonzalezWhen the Stranger says: “What is the meaning of...

https://dappledthings.org/15859/strong-towns-a-bottom-up-revolution-to-rebuild-american-prosperity-by-charles-l-marohn-jr/
Yet, as G.K. Chesterton wrote, “Men did not love Rome because she was great. She was great because they had loved her.”
If we don't love Calgary (and our neighbourhoods) enough to avoid insolvency, it will not endure. Then Calgary (and its neighbourhoods) will not be great.
You can follow @n_hawryluk.
Tip: mention @twtextapp on a Twitter thread with the keyword “unroll” to get a link to it.