Read on Twitter
WHATS HAPPENING IN MEXICO? — an ongoing thread in english, written by a mexican who lives in mexico city.

every day, 10 women disappear
this isn’t about politics, this is about our right to stay alive.
setting the context: https://en.m.wikipedia.org/wiki/Female_homicides_in_Ciudad_Juárez 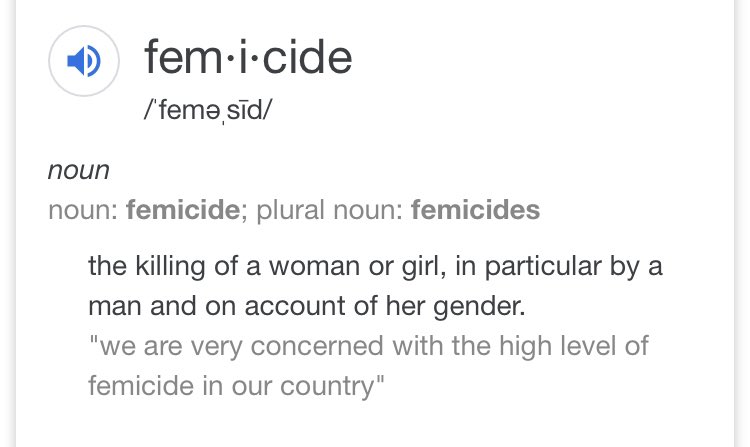 CONTEXT
Mexico’s history includes having the same party govern us for 70 years in a row after having a dictator in power for 30 years. one could argue democracy hasn’t arrived to mexico at all yet.
CONTEXT
if there’s something authority is known for around here, is for being corrupt. rules don’t matter. justice doesn’t matter. power is what matters. [to further understand this, we’d have to look at the entire post-colonization mexican history]
i could talk for a thousand tweets about how repressive mexico is, including cases like the 43 missing students, the tlatelolco massacre in ‘68, and more. but today i wanna focus on femicides. because everytime i talk about this, i feel like no one wants to listen.
WHATS HAPPENING?
In recent years, there’s been an increase of femicides. The way they’ve been handled as authorities is based a lot on victim blaming; they’re usually ruled at first as suicides. It doesn’t matter how much proof there is that it was a murder.
The victim is always at fault. Violence in Mexico keeps increasing, and the legal system keeps proving its incompetence over and over again.

Fewer than 5% of crime is solved in Mexico. Yeah.
here’s a bit of explanation of why this is handled the way it is. 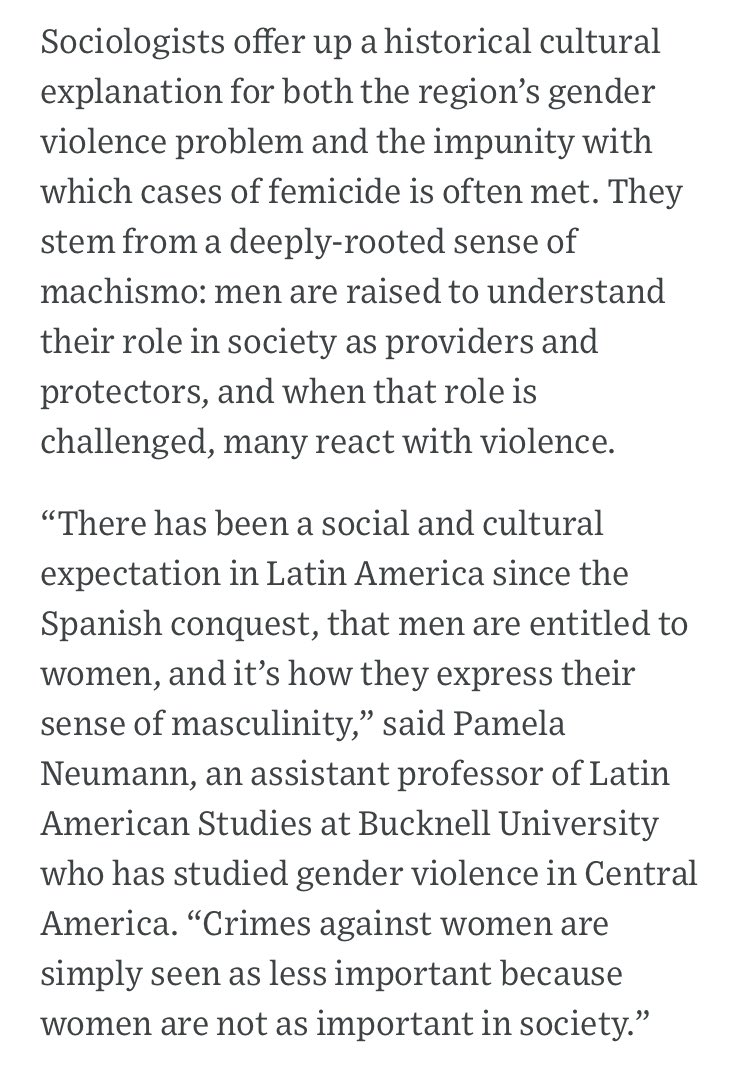 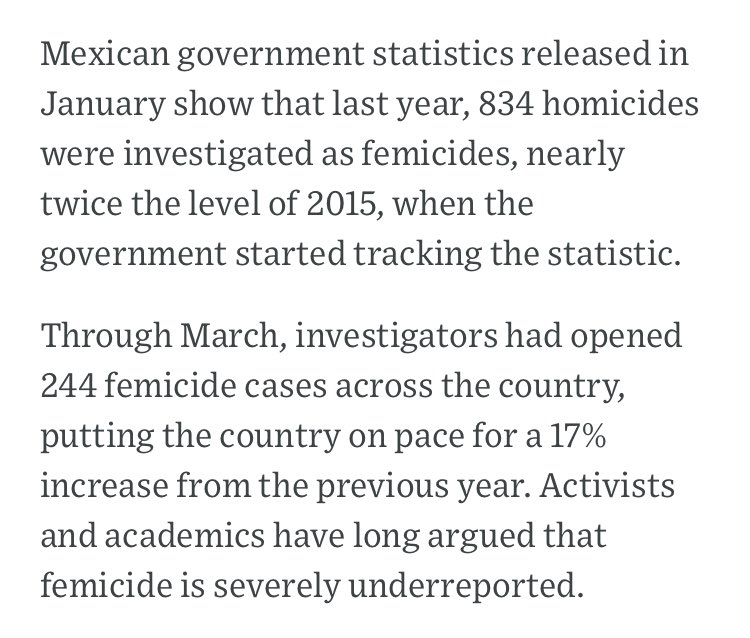 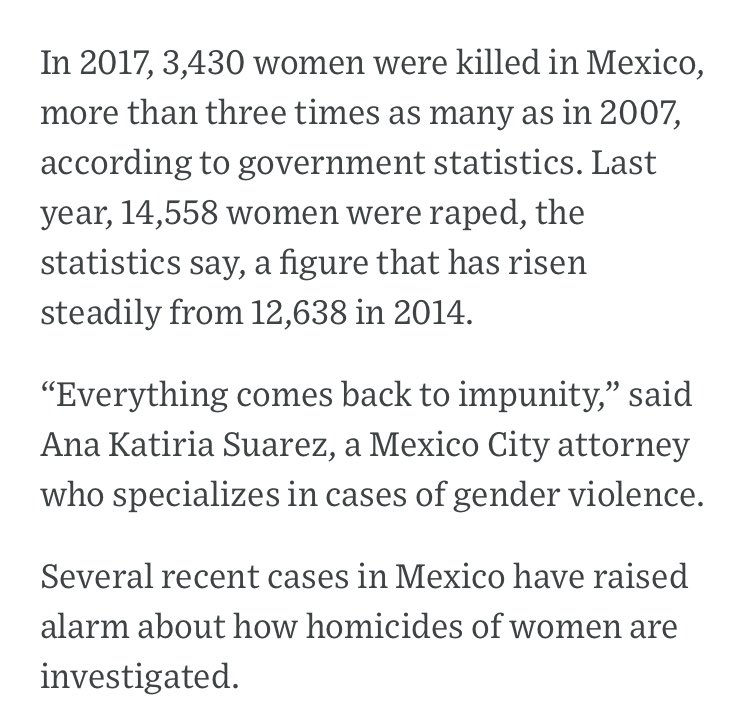 WHATS HAPPENING? — 2019
In 2019, the situation escalated. Women being taken in plain sight. Unable to take public transportation without being sexually harassed/assaulted. The amount of femicides per day raised to 10.
WHATS HAPPENING? — 2019
The concern for these killings is seen as something to mock. Something only a feminist would care about. We are mocked for caring. So women took other means to be heard. By the police. By the government. By people.
this is el angel de la independencia, one of mexico city’s biggest landmarks. this is what it looked like after a protest “got out of hand”
phrases:
(the patriarchy) will fall
don’t fuck with us
the nation KILLS
rapist police
they’re killing us
AMLO (president) feminicider 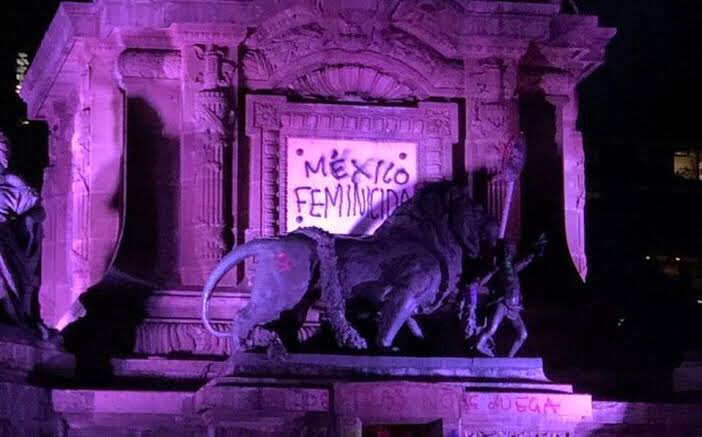 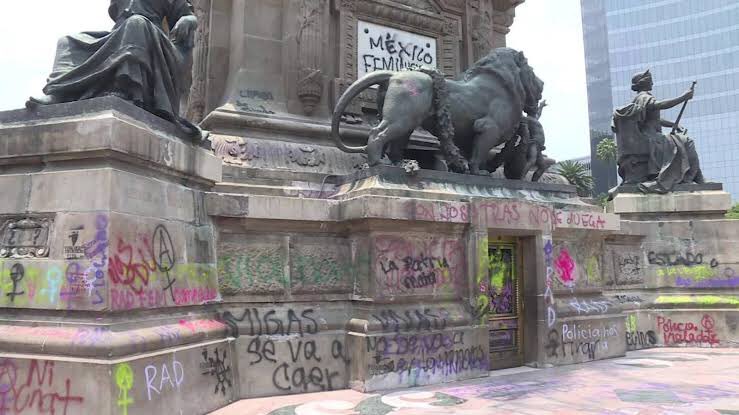 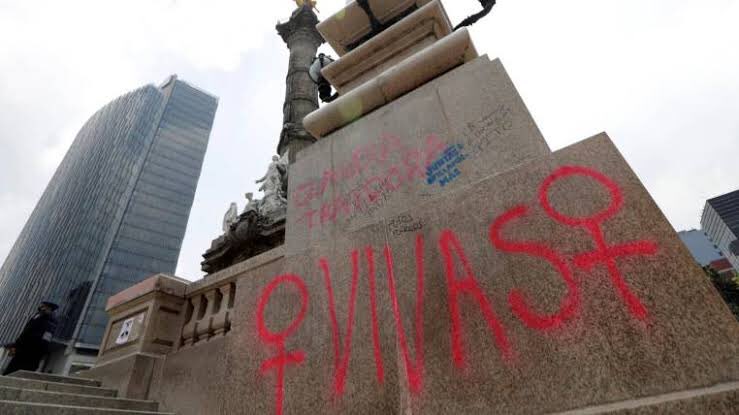 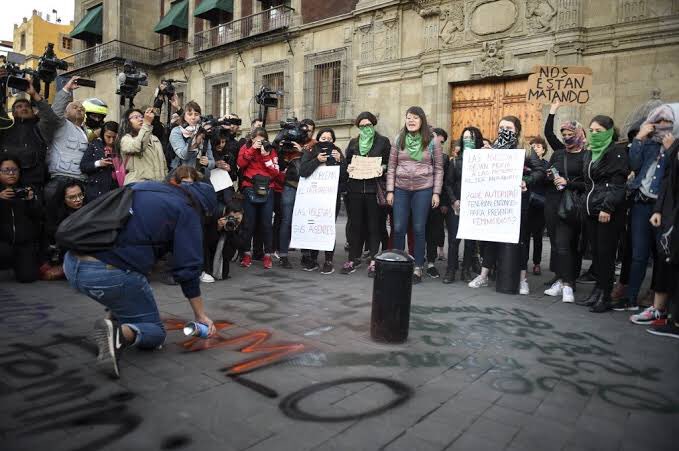 okay this was before those protests— tw rape / the cases are of MINORS
there were two cases that sparked these protests specifically.
1) a 17 yo girl was raped by 4 policemen on their patrol car
2) a 16 yo girl was raped in a museum by a policeman. https://www.independent.co.uk/news/world/americas/mexico-city-protest-police-rape-teenage-girls-demonstration-a9055641.html
Mexicans protest over alleged rape of teenage girls by police office…

Hundreds of protesters took to the streets of Mexico City calling for justice for two teenage girls who were allegedly raped by police officers. The first case involves a 17-year-old girl who said

https://www.independent.co.uk/news/world/americas/mexico-city-protest-police-rape-teenage-girls-demonstration-a9055641.html
this led to protests to the prosecutors office. a pigs head was left inside. pink glitter was thrown at the security minister. this was condemned as an act of violence. claudia sheinbaum, our mayor, calls these protests “provocations” 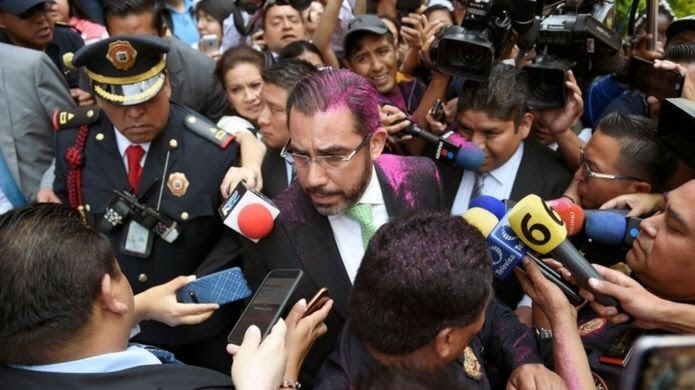 a popular phrase to come out of this is “No me cuidan. Me violan” They don’t take care of me. They rape me. In reference to the police.
Translations
D** police pigs
My women friends care for me. Not the police
Demanding justice isn’t a provocation. 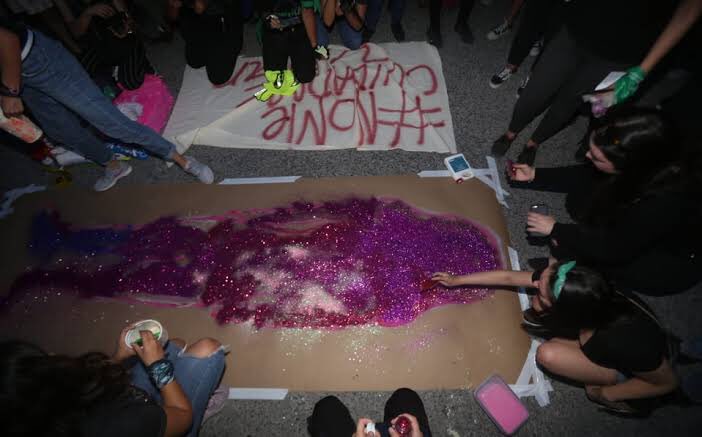 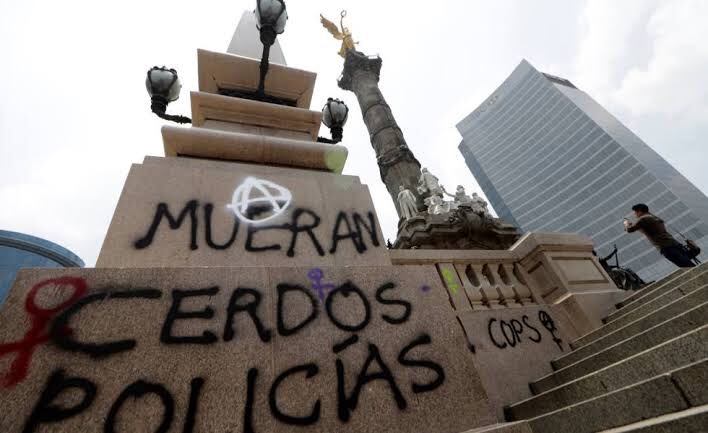 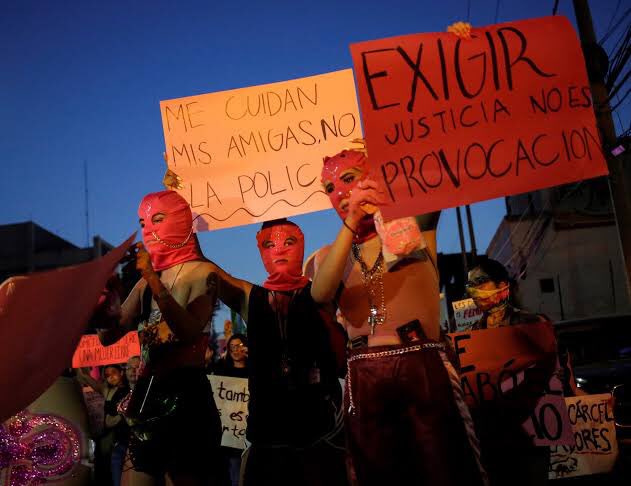 Okay back to the monument. The vandalizing of national monuments opened a conversation. We all heard of it. It was always “I understand, but can they leave the monuments alone? There’s ways of asking” Should we have to ask AT ALL? All we ask is to NOT BE KILLED.
since the focus was more on the monuments than on the cause, because no one wants to admit women are hated here, this was the general sentiment:
“I wish i was a wall, that way you’d be outraged if they touched me without permission.” 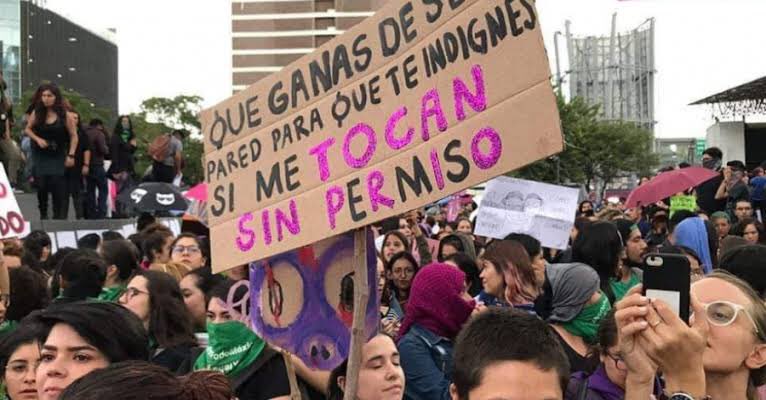 the protests continued through the year. We’re still not heard. We’re still treated like a joke. We get asked why exactly we deserve to live. We’re seen as less than human. There’s this popular phrase in Mexico, “Calladita te ves más bonita”— you’re prettier when you’re silent.
WHATS HAPPENING? 2020
(i’m gonna be discussing two cases in specific. discretion adviced)
tw i’ll describe some stuff to make you understand just how heinous these cases are. sorry.

The brutal killing and mutilation of a 25-year-old woman in Mexico has sparked outrage and prompted calls for a change in the country's law, after several media outlets published a leaked photograph...

https://edition.cnn.com/2020/02/13/americas/ingrid-escamilla-mexico-murder-case-scli-intl/index.html
FEBRUARY 2020
TW PEDOPHILIA
Fatima. 7 year old. Abducted by a woman picking her up from school; you see, her husband wanted an underage girlfriend, and she needed to protect her kids. Fatima is dead. She was found on a trash bag. https://www.eluniversal.com.mx/english/fatima-7-year-old-girl-was-abducted-and-murdered-mexico-city
Fátima, a 7-year-old girl, was abducted and murdered in Mexico City

Fátima was outside school, unsupervised, waiting for her mother to pick her up

https://www.eluniversal.com.mx/english/fatima-7-year-old-girl-was-abducted-and-murdered-mexico-city
There are several more cases like this. But these two caused the biggest outrage.

Now, what does the president think about all this?

That's not a joke.
Some more context:

Mexico has this crazy expensive presidential airplane. Our current government is "socialist", so the president is doing a lottery to give it away.

God, this all sounds fake.

Anyway, he said he doesn't want femicides to overshadow the lottery.
All this and more led to UN DÍA SIN MUJERES, a day without women. Also called El Nueve Nadie Se Mueve (The ninth nobody moves). On March 9, there'll be a nationwide strike. Women will not show up to work, to school. We won't make any purchases. We won't go online.
It'll virtually be a collective disappearance. The monetary loss this will cause is projected to be 37 million mexican pesos, 1,840,265 USD, as of the moment i'm writing this tweet.
So the president set the date for the sale of his lottery tickets for the presidential plane to be MARCH 9. Showing he doesn't care about the movement, he wants to have the light away from it.
After outrage, he moved the date.
However, yesterday he assured that MEN can also join the strike. That March 9 is a day off. Showing he doesn't give a fuck about this.

I'll continue this thread as events develop.
I'd also like to add that all this situation, all I talked about, is treated like a joke. There's memes about this shit. Caring about this is seen as a trend. Men joke about us getting killed.
Everyday we leave our houses it feels like we're saying goodbye, everyday we step outside we wonder if we'll make it back alive.
An article about femicides of indigenous women in Mexico. Because it feels like they're always excluded from the narrative. https://lasillarota.com/lacaderadeeva/feminicidios-de-indigenas-las-muertes-que-no-importan-violencia-genero-feminicidios-indigenas/312887?fbclid=IwAR2cKAoc4tztI9E5VAveLwXyejXuaQW49BJj1uhVJ5a54SzQhjMMFmWeBx8
Feminicidios de indígenas, las muertes silenciadas

La Minerva (Athena), cultural landmark, was painted with red water. Symbolizing the blood of the murdered. 230 women have been murdered since september 2019 in Guadalajara and only 36 cases have been reported as femicides. 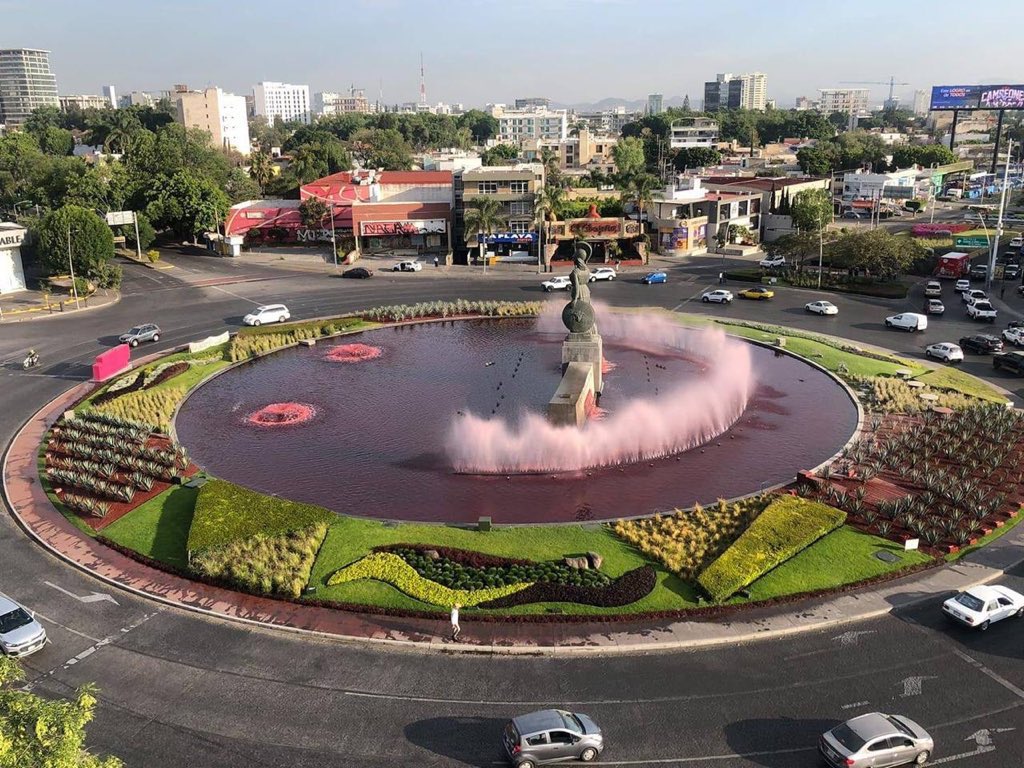 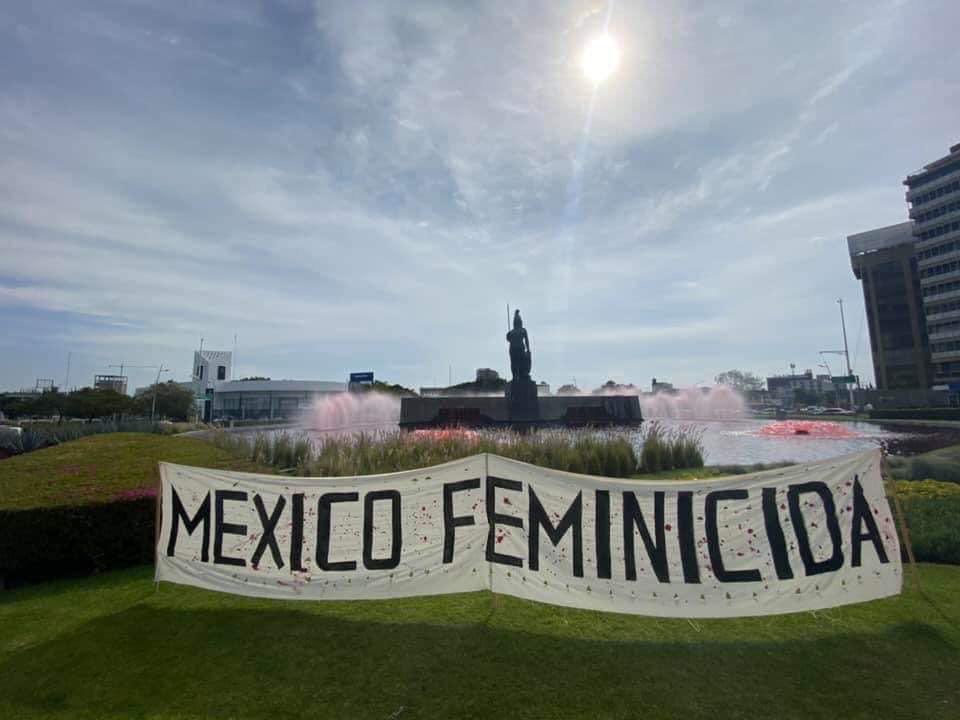 MARCH 7, 2020 — MEXICO CITY
La Diana Cazadora, another cultural landmark, was also painted with red. Not long after, it was cleaned.
If only they prioritized femicide investigations the way they prioritize keeping our city “pretty”. 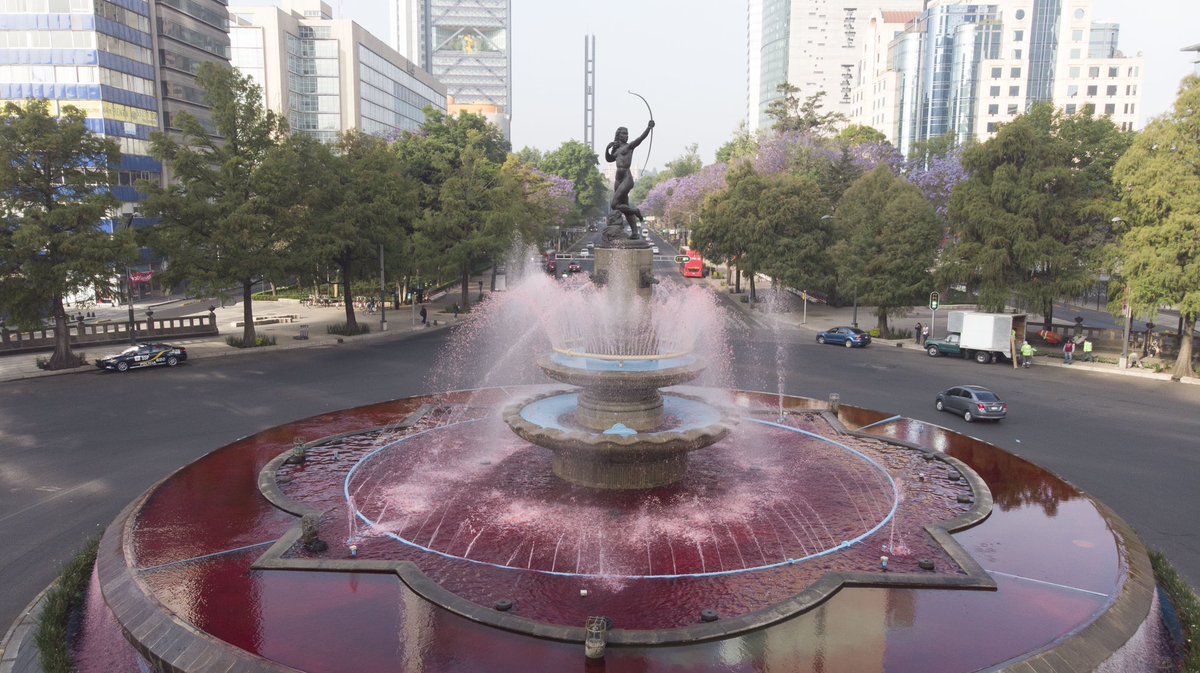 Welcome back. A lot of people are saying “happy women’s day”, but i don’t see anything to be happy about.

Today, Mexican women will take the streets. There’s threats of men throwing acid at those who do.

https://www.eluniversal.com.mx/metropoli/cdmx/por-que-hablan-de-ataques-de-acido-y-la-marcha-del-8-de-marzo
some important codes and phrases to understand today’s march

- pro abortion. you’ll see a lot of women with this bandana. abortion isn’t legal in most of mx

— we want us [women] alive
Un Violador En Tu Camino — A Rapist in Your Path. Chilean performance piece created by Las Tesis.
in spanish:
in english:
I’d like to clear up that femicides are a rampant issue accross Latin America, a lot of the stuff I mentioned above comes from Argentina. This thread focuses on Mexico because it’s where I live.

MEXICO CITY (Thomson Reuters Foundation) - Women took to the streets over the past year across Latin America - from Mexico and Chile to Argentina and Brazil - demanding governments take action in a...

https://www.reuters.com/article/latam-women-protests/factbox-where-latin-america-women-are-fighting-the-worlds-highest-murder-rates-idUSL8N2AX8B9
WHAT CAN YOU DO IF YOURE OUTSIDE MEXICO?

We want to be heard. We want people to be OUTRAGED over this. Not just mexicans and latinos. We want this to be heard across the world. We want to pressure authorities. Let the world know this is happening in Mexico.
We want EMPATHY. We want to feel like we matter to SOMEONE. If you know a woman who lives here, let her know you care. Ask her how she feels. Because our government doesn’t care. Because men mock us for being scared. Don’t be complacent.
Women from all backgrounds are victims. None of us are safe.

This list breaks down some of the 2019 murders in the State of Mexico and Mexico City ALONE. It’s not even all of them. https://lasillarota.com/metropoli/mujeres-asesinadas-en-cdmx-y-edomex-los-rostros-de-2019-feminicidio-camila-abril-daniela/348762
Mujeres asesinadas en CDMX y Edomex: los rostros de 2019

https://lasillarota.com/metropoli/mujeres-asesinadas-en-cdmx-y-edomex-los-rostros-de-2019-feminicidio-camila-abril-daniela/348762
Like I said, less that 5% of all crime in Mexico is ever solved.

If we go to the police w concerns for our safety, they ask us to pay them constantly to keep us safe, or they outright ignore us.

There’s impunity at play, it’s known you can get away with murder.
if you wanna spread the news, this is a great article https://www.theguardian.com/world/2020/mar/07/mexico-femicides-protest-women-strike?CMP=Share_iOSApp_Other
'This is our feminist spring': millions of Mexican women prepare to strike over femicides

As the country grapples with a worsening crisis, the revolt among a new generation of feminists is picking up steam: ‘It’s our last resort’ 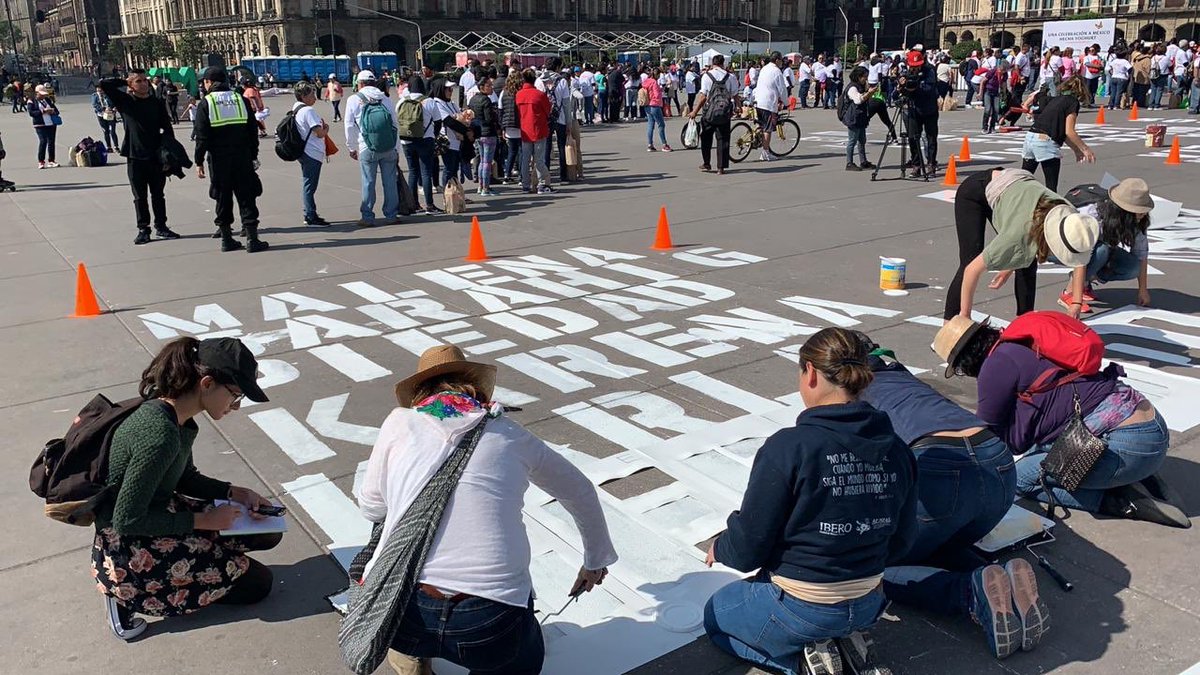 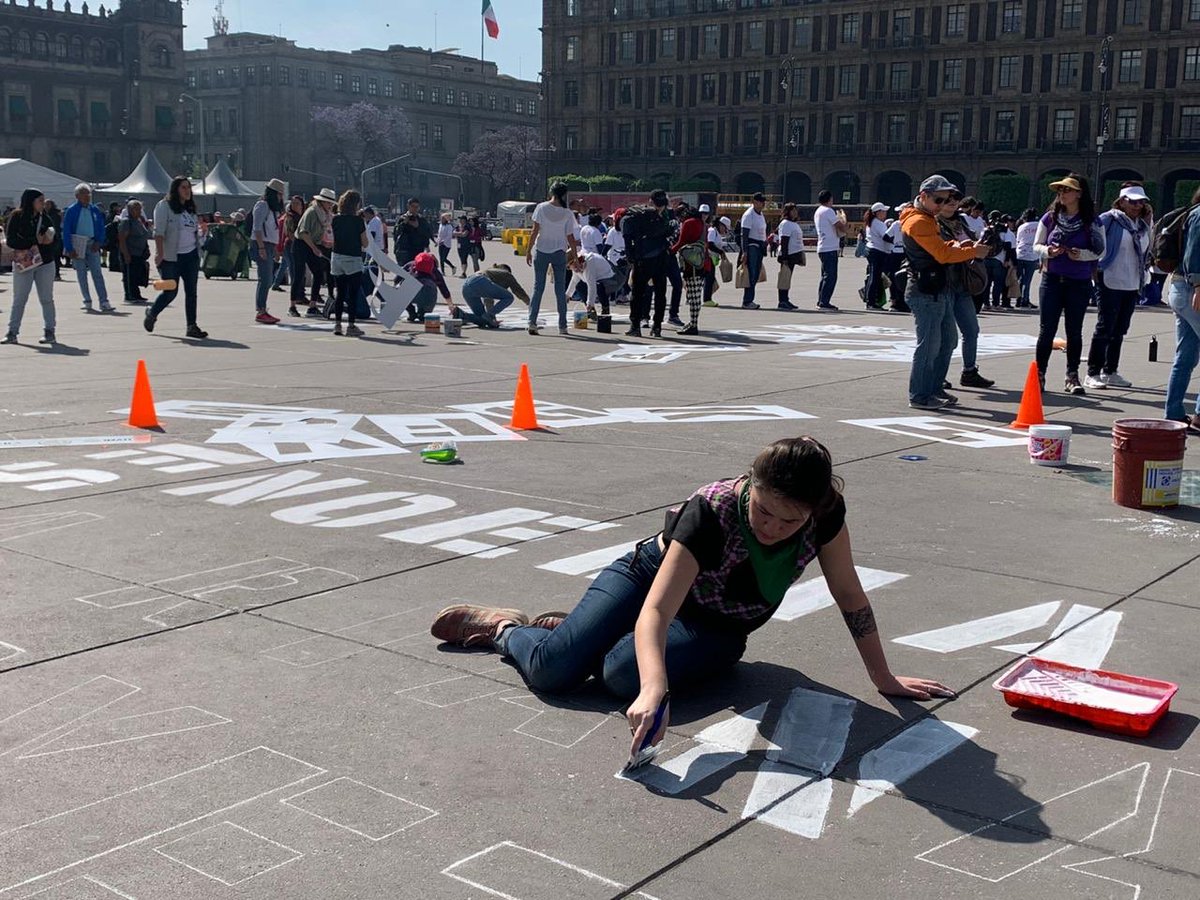 I'm back from the strike. I don't know the impact it had. I just know I'm gonna have to face sexist comments all day.

The point of this thread wasn't to boost any political party, it was just to inform. I'm apolitical.

I'm not affiliated with any organization, either.
This hasn't stopped, I just got overwhelmed. Please understand I am not a reporter or an activist, I'm just a student who can speak English. Between March 8 and 9, 21 women were murdered. Here are their stories. https://www.animalpolitico.com/2020/03/21-mujeres-asesinadas-8-9-marzo-mexico/
21 mujeres fueron asesinadas el 8 y 9 de marzo en México

https://www.animalpolitico.com/2020/03/21-mujeres-asesinadas-8-9-marzo-mexico/
You can follow @dannytorrances.
Tip: mention @twtextapp on a Twitter thread with the keyword “unroll” to get a link to it.