Read on Twitter
On 24th Feb, the extradition hearings in the case of #JulianAssange begin. This week, I will be tweeting out the articles that weren't just great at the time of publication but are worth re-reading now, to get a real handle on the case

1/
@LissaKJohnson 's 'The Psychology of Getting Julian Assange' explores the psychological dimensions of the CIA decision of "taking down Wikileaks". Remember, these are the same CIA who use / approve in Guantanamo of the professional psychologists who destroyed people by .....
2/
"rectally force feeding victims with hummus, pasta and nuts; sexually assaulting them with broomsticks; locking them in boxes of insects; threatening to harm their children and slit their mothers throats, or rape their mothers in front of them."
3/
Lissa's article explains how tools of psychological warfare are used by organisations such as the CIA. She also discusses the vilification and isolation of #Assange in this series
https://newmatilda.com/2019/02/23/psychology-getting-julian-assange-part-1-whats-torture-got/
4/
The Psychology Of Getting Julian Assange, Part 1: What’s Torture Got To Do With It? - New Matilda

In the first part of a special New Matilda investigative series, clinical psychologist Dr Lissa Johnson exposes the ‘science’ behind the hunt for Julian Assange, and the tactics those in power use to...

https://newmatilda.com/2019/02/23/psychology-getting-julian-assange-part-1-whats-torture-got/
If you are amongst those who read about the CIA modus operandi, yet shrink from referring to the horrific trauma that #JulianAssange has been put through, as "torture", then read this insightful interview with UN Special Rapporteur @NilsMelzer https://www.republik.ch/2020/01/31/nils-melzer-about-wikileaks-founder-julian-assange
5/
«A murderous system is being created before our very eyes»

For the first time, Nils Melzer, UN Special Rapporteur on Torture, speaks at length about his investigations into the case of Julian Assange.

https://www.republik.ch/2020/01/31/nils-melzer-about-wikileaks-founder-julian-assange
Another excellent article worth reading (particularly by those preparing to attend #JulianAssange ‘s extradition trial tomorrow or to join one of the protests globally), is @CraigMurrayOrg ‘s poignant account of the harrowing October hearing. https://www.craigmurray.org.uk/archives/2019/10/assange-in-court/ 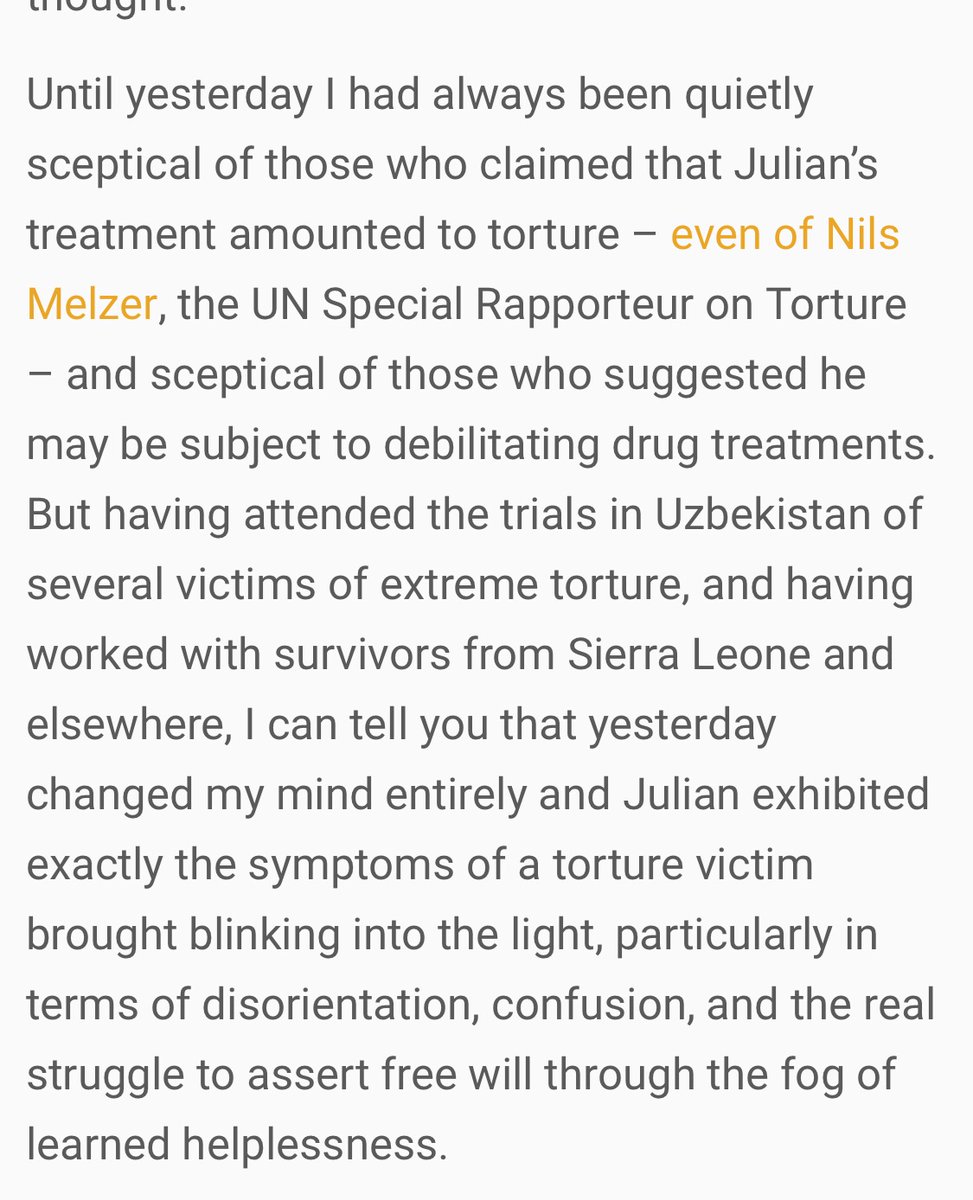 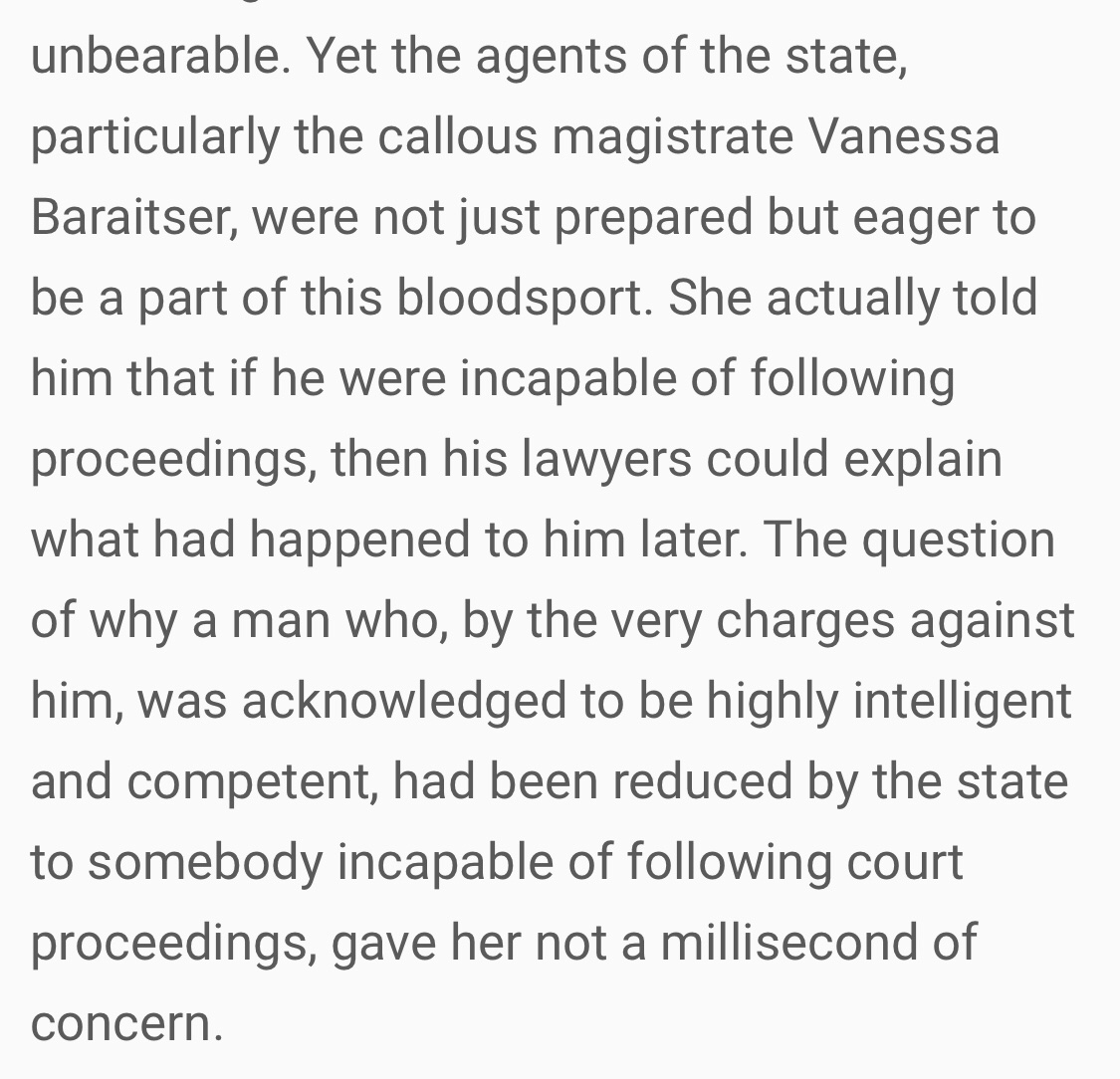 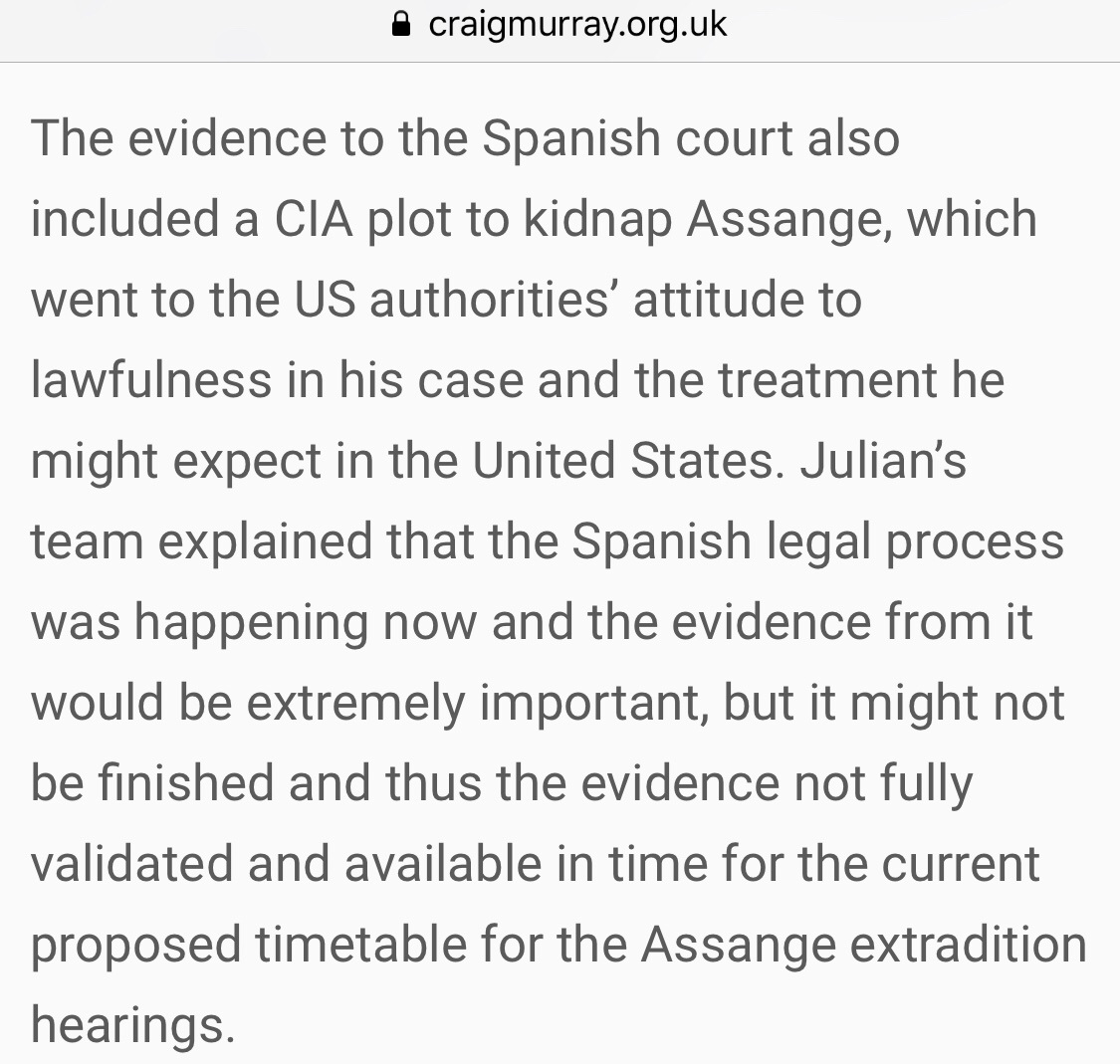 Some “journalists” have wilfully turned a blind eye to Julian’s torture by hinting that #JulianAssange is not a “real” journalist or that he doesn’t care about protecting his sources. Watch this from #Assange himself, as interviewed by John Pilger http://johnpilger.com/videos/julian-assange-in-conversation-with-john-pilger
7/
This insightful discussion between @ChrisLynnHedges & @vijayprashad explores matters related to #JulianAssange ‘s arrest and treatment with remarkable clarity & depth

Excerpts in pics below 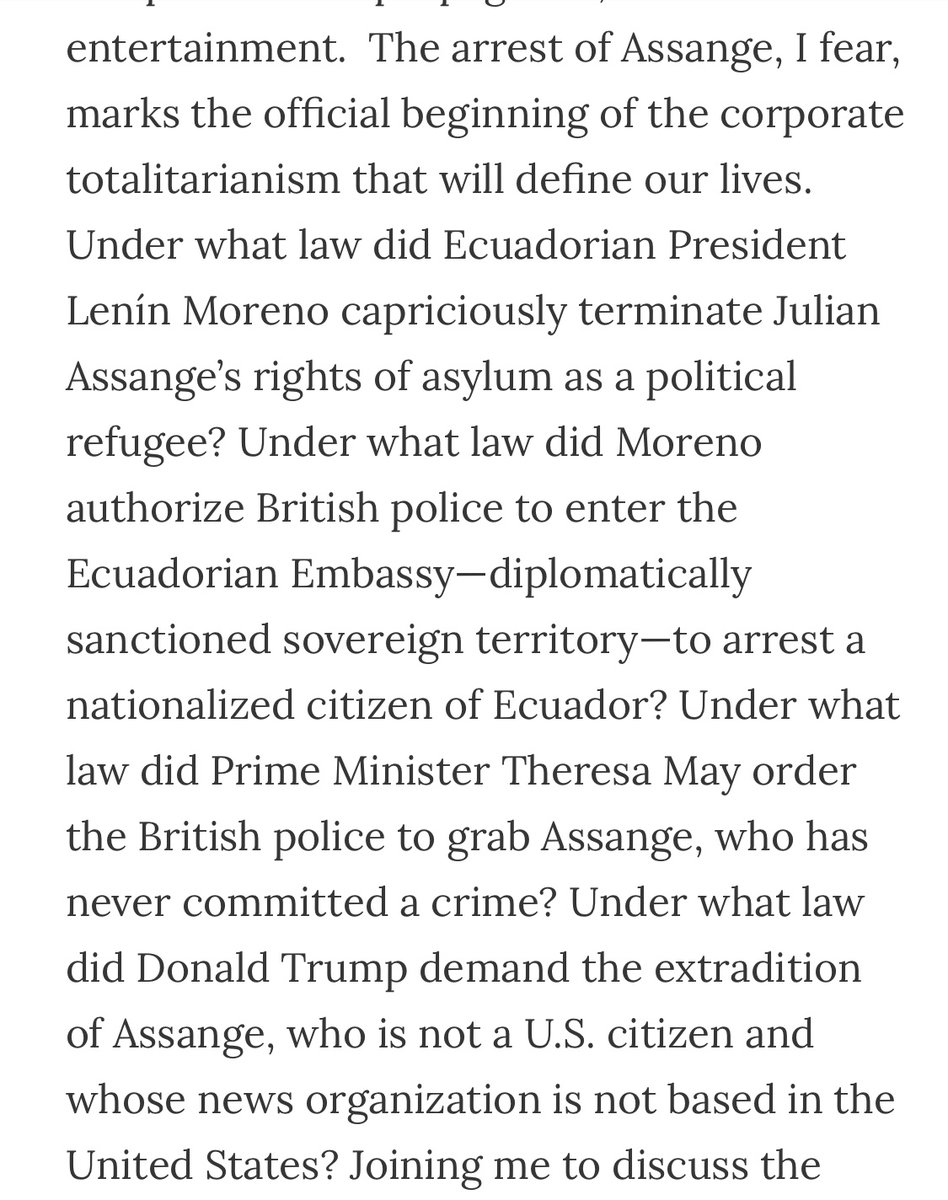 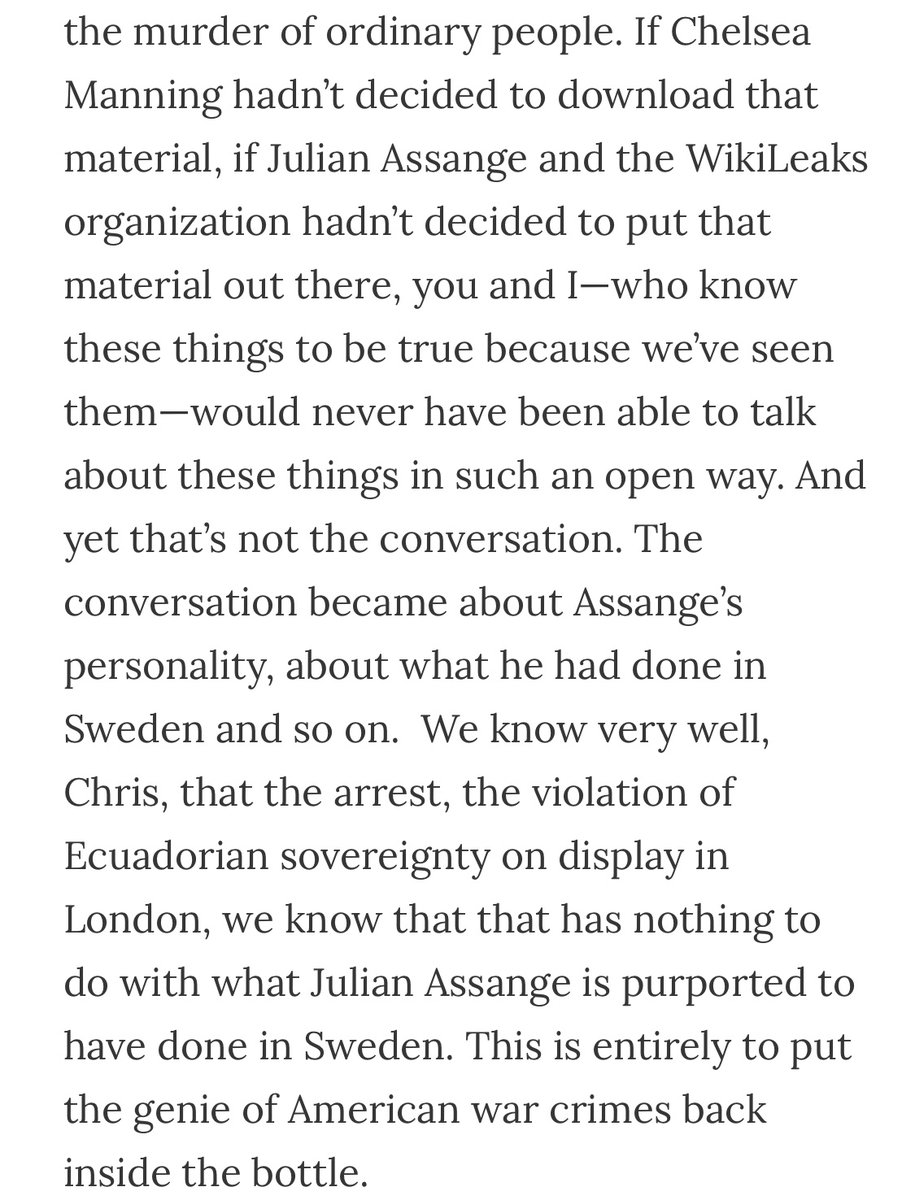 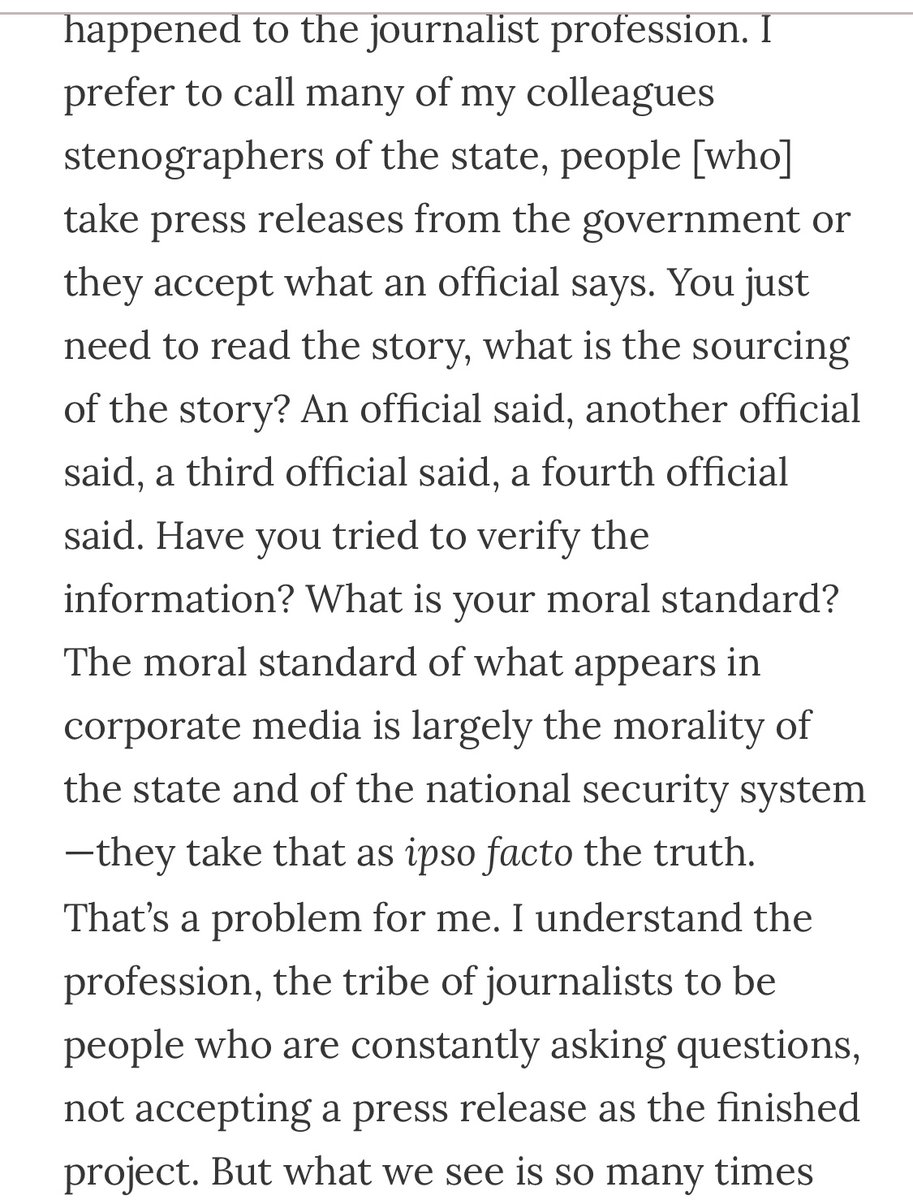 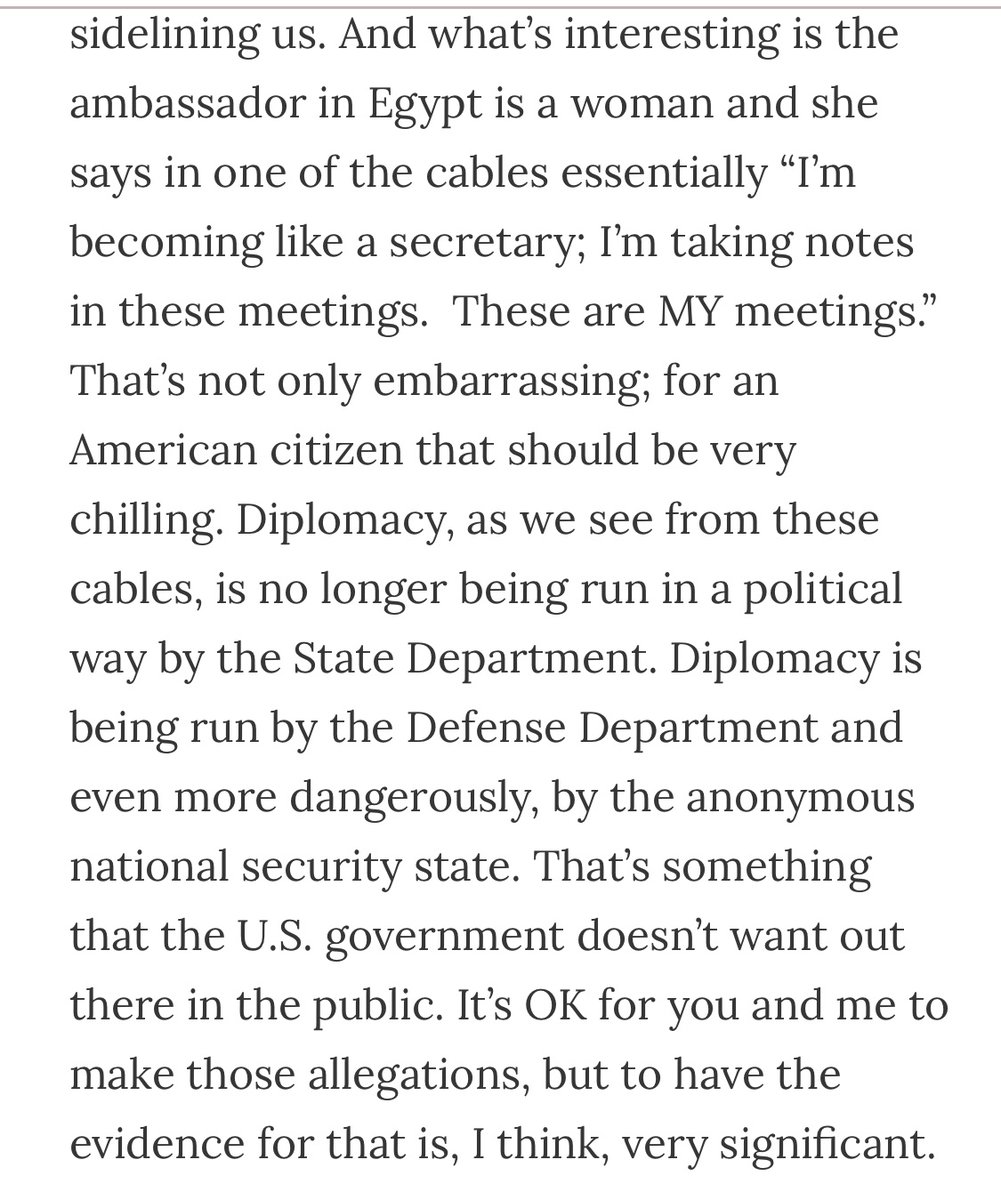 Thread continues today with an article about serious prosecutorial misconduct in the framing of Julian #Assange using sexual assault allegations. As @LissaKJohnson points out that survivors’ trauma, pain & plight have been exploited for political gain
https://newmatilda.com/2019/09/23/weaponising-rape-myths-and-consent-in-the-hunt-for-julian-assange/ 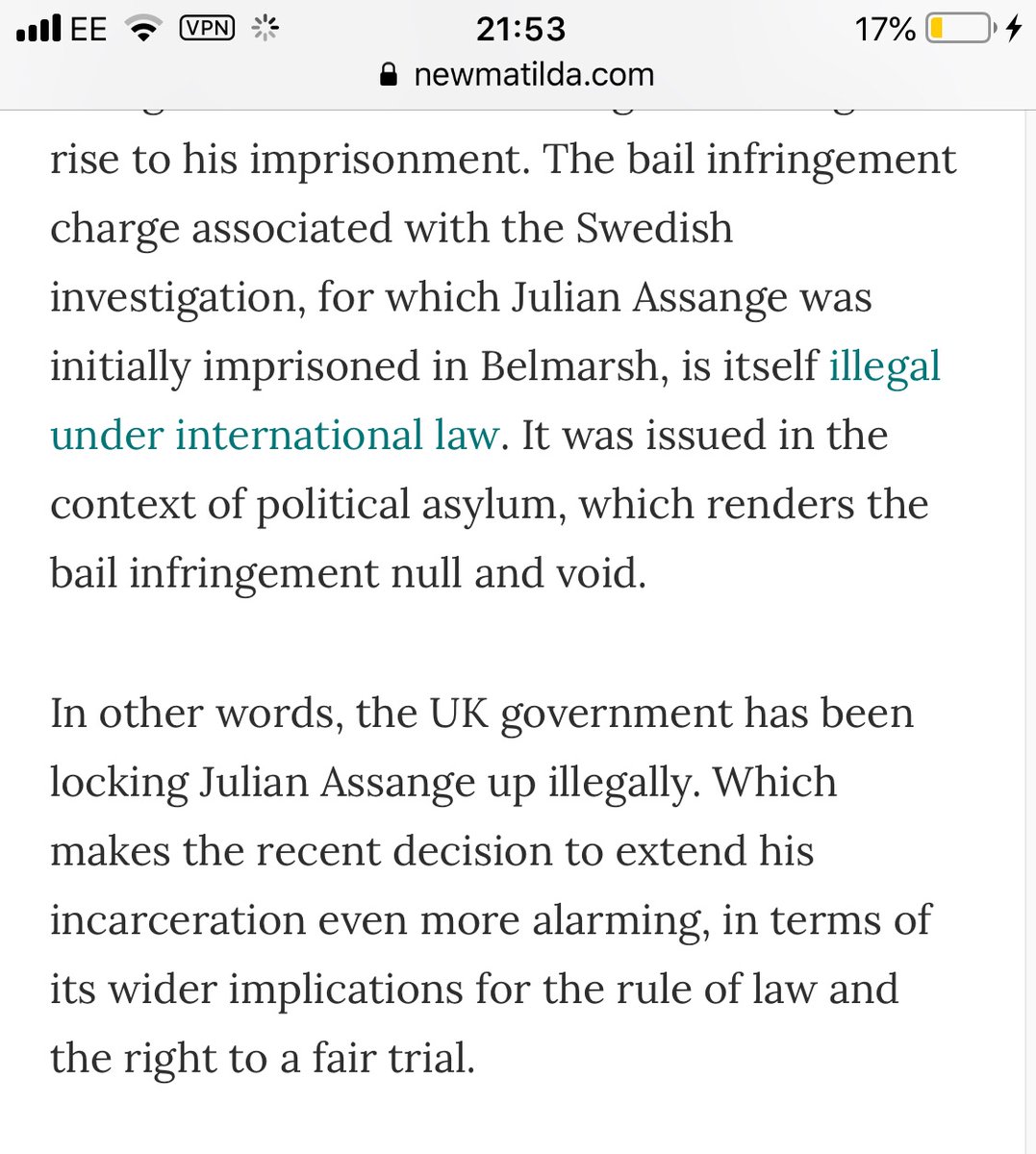 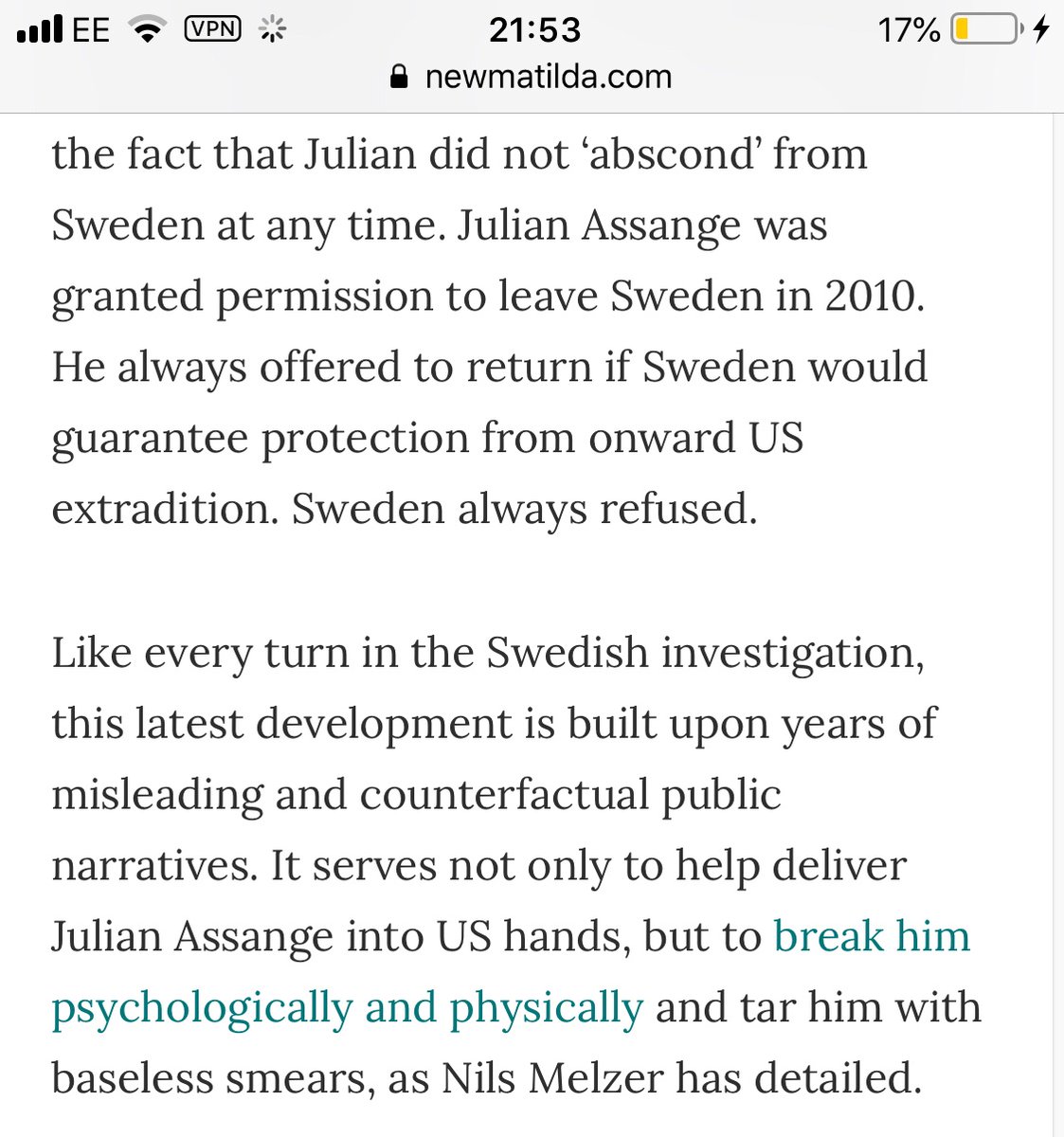 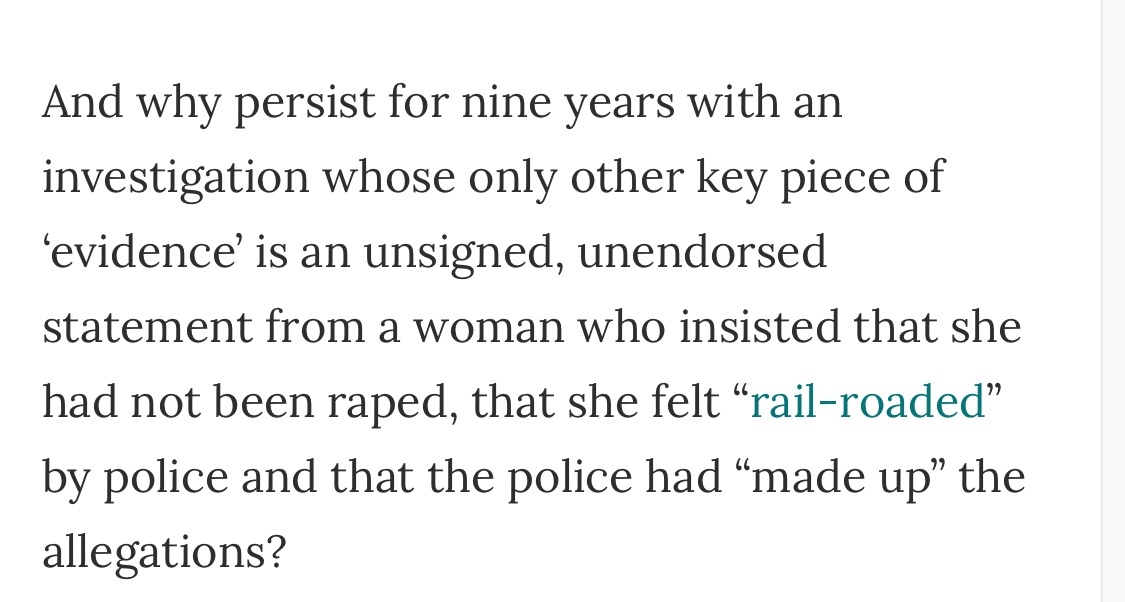 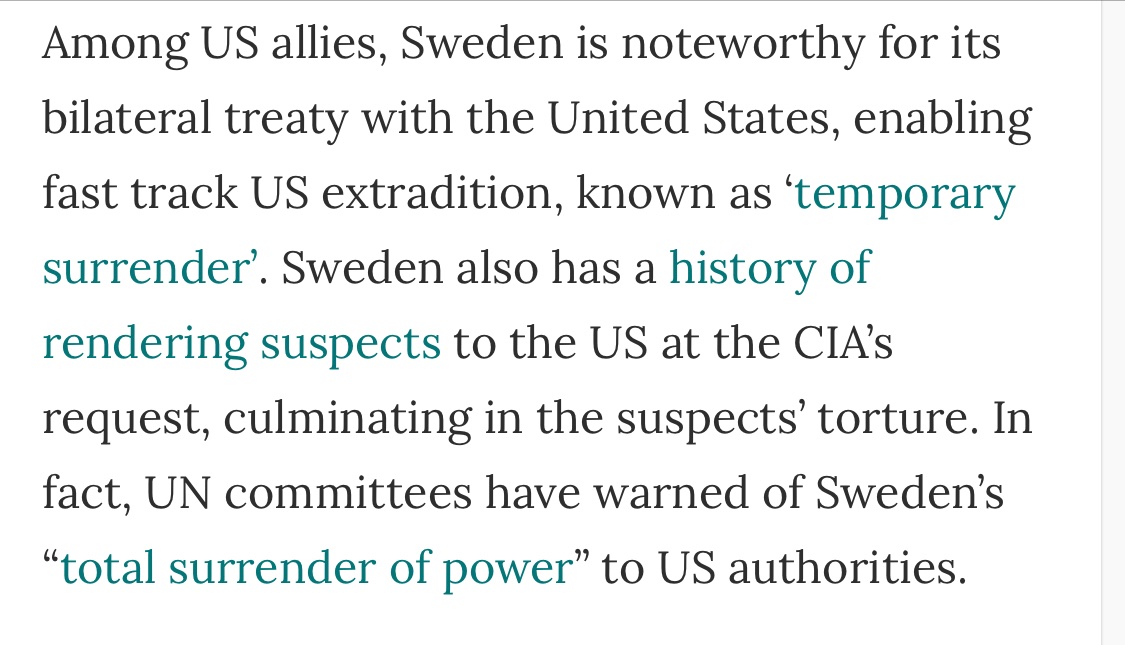 10/
Few documents, many mysteries. How our FOIA case is unveiling the questionable handling of the...

The FOIA litigation intiated by our newspaper has become central to the case argued today before a London court, providing factual information on a pattern of

https://www.thecanary.co/uk/2018/02/12/new-evidence-suggests-uk-detained-julian-assange-political-reasons/
Two recent documentaries about Julian #Assange come next on my list.

The first by @RT_com offered me, amongst other things, a perspective on what it takes to raise a child to be a courageous adult

11/
The second doc by Robert Holm & @ElenaKuch, has a memorable line : “Hillary Clinton once said, cant we just take the guy out with a drone”.
Then there is the visible arrogance of Daniel Benjamin & the belief that the deaths, rapes & displacement of 1000s don’t count. Vile!

12/
In addition to reminding us that Julian was never charged by Sweden and a number of other key facts, the documentary underlines the impunity with which powerful Americans think they can kill, destroy, defame or maim anyone who reveals their crimes


13/
Correction: typo. It should say ‘...the impunity with which CERTAIN powerful Americans...’ in the tweet above
14/
@NilsMelzer says psychological torture isn't "torture-lite". But what is psychological torture? Why is Julian #Assange a torture victim? The next few tweets explain this using words (please assume quote marks) from an article by @LissaKJohnson
https://concurrentdisorders.ca/2020/04/03/psychological-torture-coronavirus-and-julian-assange/
15/
Psychological Torture, Coronavirus, and Julian Assange

19/
The deliberate psychological distress caused can be more debilitating & agonizing than the actual materialization of that fear, & ....even physical torture can be experienced as less traumatizing than the indefinite psychological torment of constant fear and anxiety
20/
Psychological torture can manifest with attacks on dignity and identity as a key torture tactic - through public shaming, defamation, vilification or exposure of intimate details of the victim’s private and family life

21/
It is carried out through the proactive targeting of victims’ sense of self-worth and identity through the systematic and deliberate violation of their dignity… using derogatory or feral treatment, insults, verbal abuse & … humiliation.

22/
Another technique is depriving victims of their control over as many aspects of their lives as possible, to demonstrate complete dominance over them, and to instil a profound sense of helplessness & hopelessness

23/
Yet another technique is sensory deprivation…producing apathy, disorientation, confusion..(& with more severe and prolonged deprivation) delusional, hallucinatory and psychotic symptoms

24/
It can also be achieved by imposing isolation, social exclusion, mobbing and betrayal. Persons deprived of meaningful social contact and subjected to emotional manipulation can quickly become deeply destabilized and debilitated.

Yet another tactic is to destroy trust

26/
Now, let's look at the prolonged psychological torture of Julian #Assange in the light of these points

27/
Julian has been subjected to a sustained campaign of fabrication & distortion. He has been relentless & baselessly branded a terrorist, foreign agent, & rapist on the world stage for many years

28/
Public figures have repeatedly debased and smeared him.

29/
His safety & security have been threatened by being placed on a NationalSecurity Agency (NSA) ‘manhunting’ target list in 2010. Noteworthy figures have called for his assassination. The US Government had entertained plans to kidnap him

30/
He's facing the prospect of lifelong torture & cruel inhuman & degrading treatment in the United States. But first he will be placed under administrative measures - meaning neither he nor his lawyers will be able to talk to the media .
31/
Then, he faces, a trial in the US, - He a non-US citizen will be tried in the US under US laws, without first amendment protections, for action undertaken outside the US, where such actions are lawful. The trial will take place in a court where the US state always wins

33/
So what about the extradition trial in Britain? Isn't that being done in a just manner? Read these accounts highlighting Julian's experiences of the arbitrary detention & torture he experiences at Her Majesty's pleasure

And here are Days 1 & 2 of the first phase of the extradition hearing https://www.craigmurray.org.uk/archives/2020/02/your-man-in-the-public-gallery-assange-hearing-day-1/
Day 2: https://www.craigmurray.org.uk/archives/2020/02/your-man-in-the-public-gallery-assange-hearing-day-2/
Day 3 and 4 are on Craig's website

35/
Your Man in the Public Gallery – Assange Hearing Day 2

This afternoon Julian's Spanish lawyer, Baltasar Garzon, left court to return to Madrid. On the way out he naturally stopped to shake hands with his client, proffering his fingers through the narrow s

https://www.craigmurray.org.uk/archives/2019/10/assange-in-court/
So why is his detention and his treatment in court a continuation of the arbitrariness & cruelty of the psychological torture he's already experienced?

36/
Lets park the facts re his luggage being stolen when he flew to Britain from Sweden & an Interpol red notice being issued when he had permission to leave Sweden. Lets park the conspiring between Paul Close at Starmer's CPS & the Swedes to keep his case in limbo for 10years
37/
Lets park the effects of vitriol in the international media & MPs like AlanDuncan painting him as a demon but denying him the opportunity to fight his legal defence. Lets park the fact that he has chronic health conditions but isn't allowed out to the hospitalfrom the embassy
38/
Lets park the absurd allegations of hurting his cat or smearing faeces on the wall as excuses to ILLEGALLY deny him his Ecuadorian citizenship

39/
Lets park the horror of being dragged out of asylum in a criminal act by the British state. Oh yes, lets park all that psychological torture and just move to what he experiences this time around in court and at Belmarsh high security prison!!

40/
April 2019 : Julian Assange said NOTHING during the whole brief 15 mins proceedings, other than to say “Not guilty” twice, & to ask a one sentence question about why the charges were changed midway through trial. Yet Judge Michael Snow condemned Assange as “narcissistic”.

42/
June 2019: The judge in court is Lady Emma Arbuthnot.
3 sets of conflicts of interest?

43/
Declassified UK: The son of Julian Assange’s judge is linked to an anti-data leak company created...

The son of Julian Assange’s senior judge is linked to an anti-data leak company created by the UK intelligence establishment and staffed by officials recruited from US intelligence agencies behind...

https://www.globalresearch.ca/chief-magistrate-assange-case-received-financial-benefits-secretive-partner-organisations-uk-foreign-office/5704665
All this while, Julian is interred in a maximum security prison in solitary confinement, alone circa 23 hours a day.

This is John Pilger's gut-wrenching account of visiting his friend Julian in prison. Do read it . Yes, do read it
https://www.wsws.org/en/articles/2019/11/30/pilg-n30.html

44/
John Pilger visits Julian Assange in Belmarsh Prison: “Look how you frighten them!”

The following speech was delivered by veteran investigative journalist John Pilger to a public meeting in London on November 28 at St Pancras New Church.

https://www.wsws.org/en/articles/2019/11/30/pilg-n30.html
Is this part of a pattern of arbitrary, cruel, demeaning, disempowering, psychologically debilitating treatment ? What do you think so far?

You can follow @deepa_driver.
Tip: mention @twtextapp on a Twitter thread with the keyword “unroll” to get a link to it.