Read on Twitter
A thread
1/n
#RightWing Hindu(tva) #Hypocrisy.
I find this odd and disturbing. The Hindu #FarRight seeks to rewrite Indian history. Stories of #Akbar the #Great need to be erased, they say, and replaced by stories of the valour, sacrifice, bravery and wisdom of Hindu Kings.
2/n
Shivaji was the #Chatrapati we should be taught about not the vile depredations of the East India Company that usurped power. Going further back there was a golden age when India was the land of economic prosperity under the Cholas and Maurya dynasties. Note #Dynasty was OK
As a debate among academic researchers who uncover new material and re-interpret it, fine. Where it gets into the realm of #hypocrisy and #HatePolitics is when the idea is promoted that unless we understand the Greatness of our Hindu Past, India can never be a Great Power again
That is the diabolical twist given to sell the Lets-Rewrite-History-to-suit-our-self-Fulfilling-world-view. The hypocrisy comes from the attempt to stuff our school text books with made-up nonsense about the past. It allows us to blame others rather than take charge of our lives.
5/n Every modern ill that besets India is blamed on the wicked foreigner. Caste and religious divide? That was the fault of the British and their divide-and-rule census. Loss of Sanskrit? All those temples destroyed . (Never mind that Hindu kings kept the masses illiterate)
6/n And yet the idea that a)Hindu Indians are under threat and b) we cant ever be great w/out a Hindu/Vedic revival does not prevent exultation at how we ARE conquering the world. We'll soon have #EconomyAt5Trillion! Indians are taking over Western capitalism! 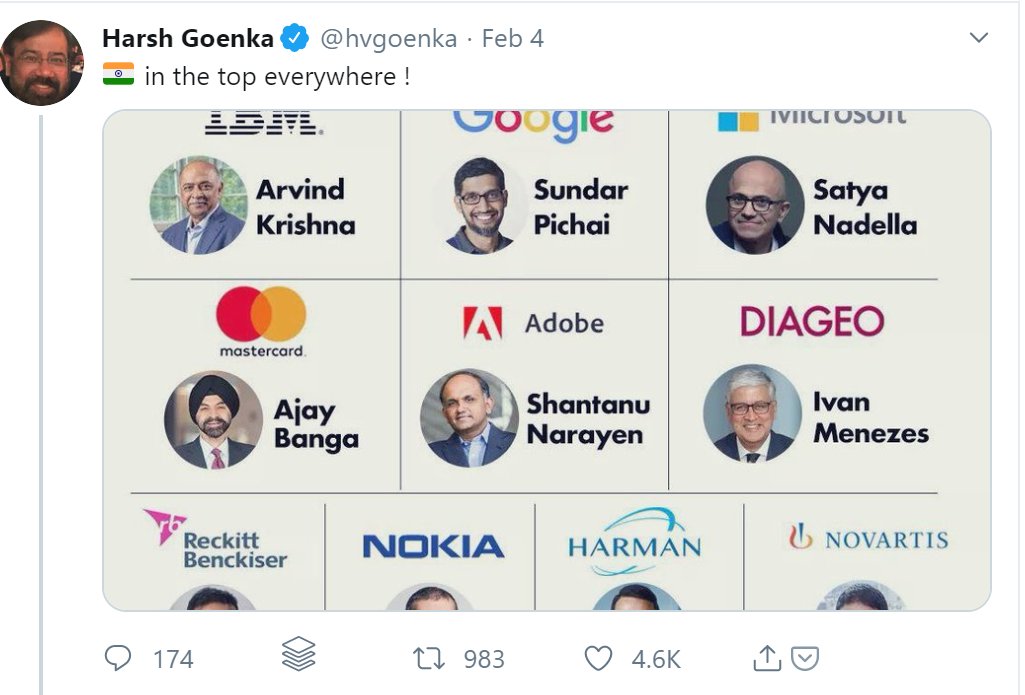 7/n
The point is you cant have it both ways. If not learning a revisionist history of the glory of Hindu Kings and Empires gives us an #InferiorityComplex, how come these guys made it big in Corporate Leadership? What lessons in History inspired them?
8/n Indeed if we take at face value the fact of past Hindu power and glory, the Q that cannot be avoided is why it crumbled so helplessly in the face of foreign onslaught. Now, that would be a subject for some really useful research.
9/n
The fact is that we are where we are. If you go back far enough, there was a time, lets agree, when Hindus in India had a civilized life while people in Europe were savages. While that provides cold comfort it provides no illumination of the way forward.
10/n
The fact is that it was the great Medieval Renaissance and the subsequent development of ideas of the protestant work ethic, liberal ideas that put the rights of the individual above that of the group, and the spread of literacy and women's emancipation that allowed...
11/n
Western economies to innovate, develop and grow. This is not to say that Europe was not without its sins of feudalism, wars, slavery and poverty. But it was the ideas of individual rights that led the change through revolution and protest.
12/n
Bottom line. It is a false pride that India was once great. The philosophical under-pinning that created that glory may no longer be relevant. Neither India nor Hinduism has a monopoly on the factors that create an environment that promotes a striving for excellence.
13/n
India needs to borrow or steal the best ideas from the world. It could do worse than start with stealing the idea of individual rights over group rights; equality of citizens irrespective of gender, religion or caste; and the rule of law.
@threadreaderapp unroll
You can follow @GorwayGlobal.
Tip: mention @twtextapp on a Twitter thread with the keyword “unroll” to get a link to it.