Read on Twitter
Preprint for our paper ‘Robot Right? Let’s Talk about Human Welfare Instead’ is up on arXiv https://arxiv.org/abs/2001.05046v1.

@theblub & I argue not just to deny robots ‘rights’, but to deny that robots are the kinds of things that could be granted rights in the first place. 1/ 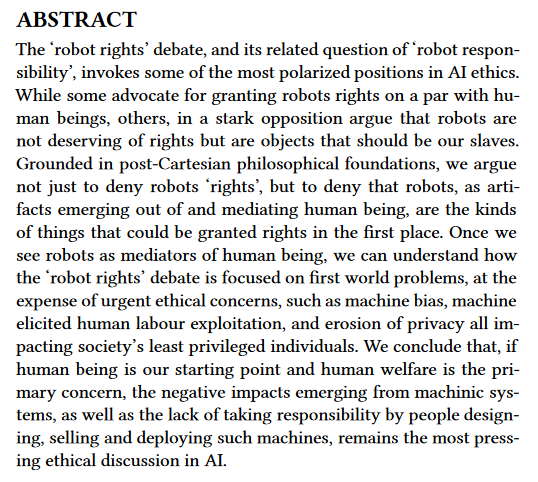 We think the entire discussion is completely misguided. At best a First World philosophical musing, too disengaged from the real world & at worst—the white, male academic’s diminutive characterization of oppressed people & their fight for rights, by appealing to ‘reason’. 2/ 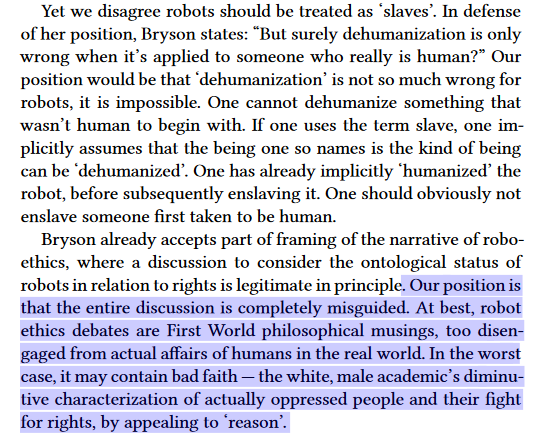 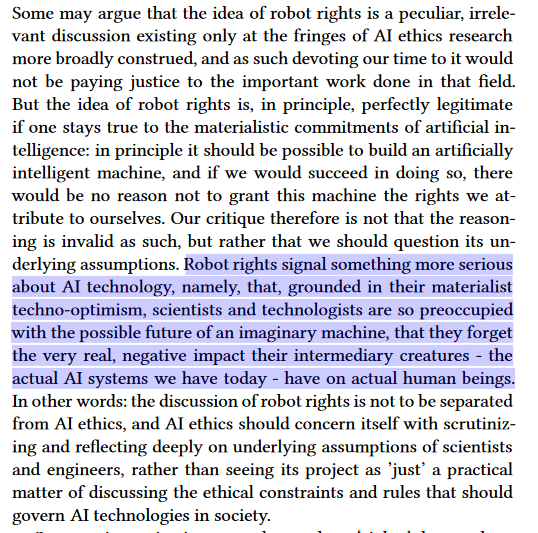 We take a post-Cartesian, phenomenological view, i.e., being human means having a lived embodied experience, which itself is embedded in social practices. Technological artifacts form a crucial part of this being, yet artifacts themselves are not that same kind of being. 3/ 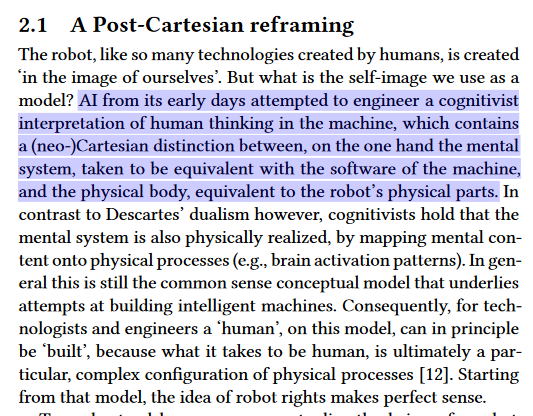 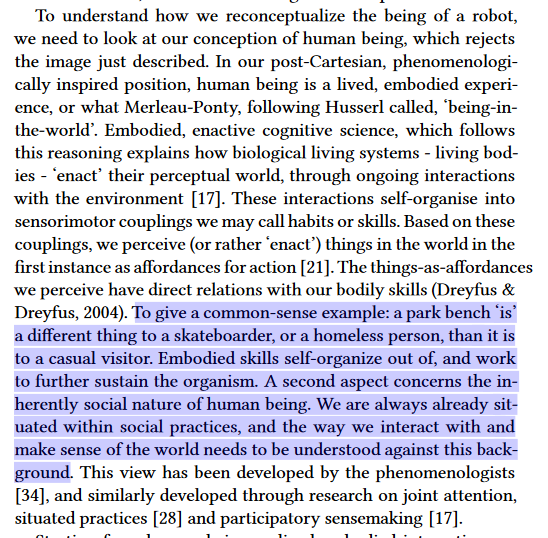 The very project of building AI rests on a Cartesian metaphysics guided by the illusion of setting ourselves apart from the natural, artificial & social world that we live in, where intelligence is modeled on a human intelligence that is detached from the world & looks upon it 4/ 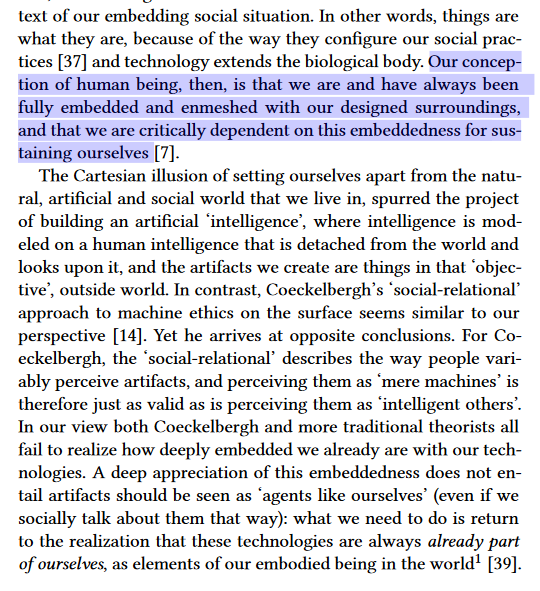 When robot ethicists claim “We have emancipated slaves, & women", we warn this reasoning runs risk of developing into the Western white male declaring “the women & slaves we liberated shouldn't complain if we enlightened men, now decide to liberate some more, such as: robots!” 5/ 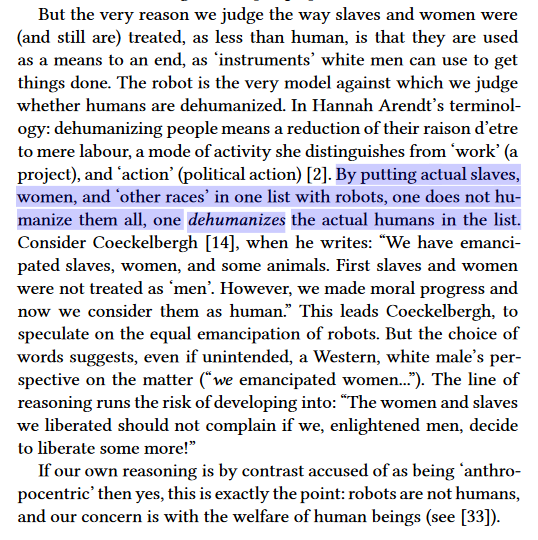 We, while arguing against robot rights, use the (in)famous Milgram obedience to authority experiment to show why robots are not the kind of things that can be granted rights (unless we are talking about the fictional world). 6/ 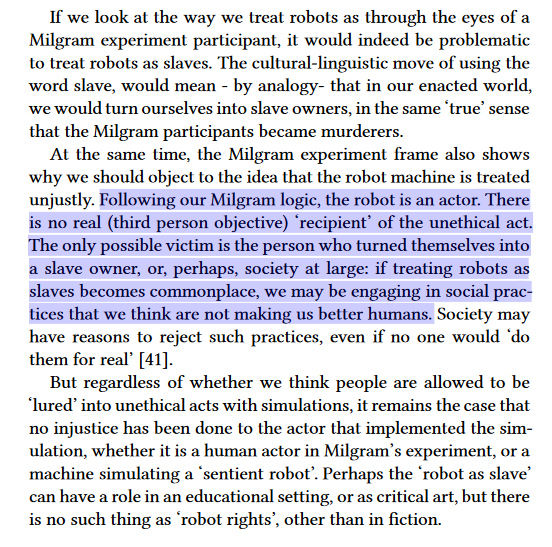 Arguing for robot rights on the basis of future visions of sentient machines is speculative armchair philosophy at best.

“General AI”, “the singularity" and ''super-intelligence" are for techno-optimists what dooms-day is for religious cults.” 7/ 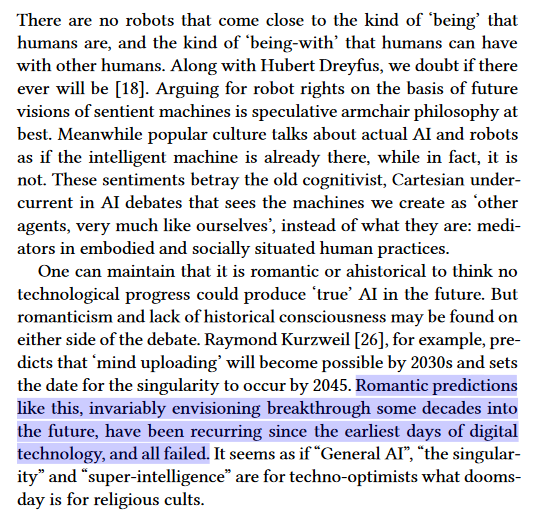 Forget robot rights. The real and urgent issues that are emerging with the mass deployment of seemingly invisible AI systems need to be discussed now because they currently impact large groups of people. 8/ 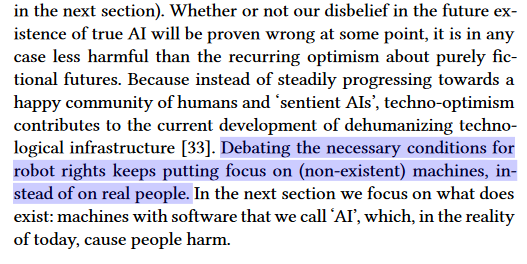 AI, far from a future phenomenon waiting to happen, is here operating ubiquitously and with a disastrous impact on socially and historically marginalized groups. We discuss machine bias, injustice and discrimination here. 9/ 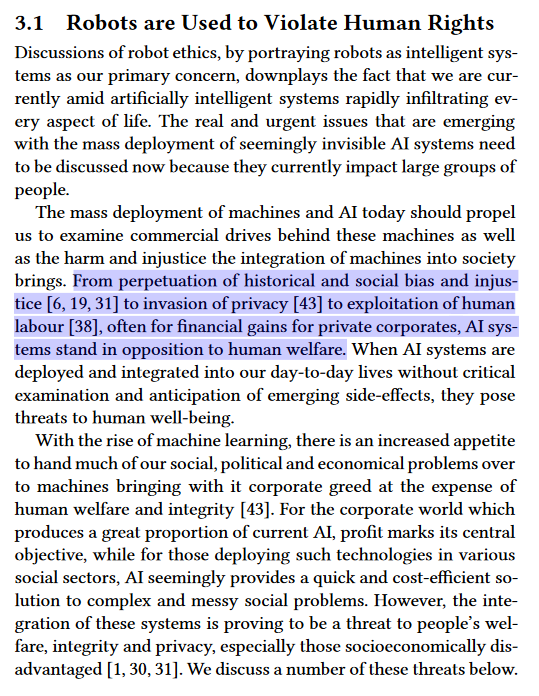 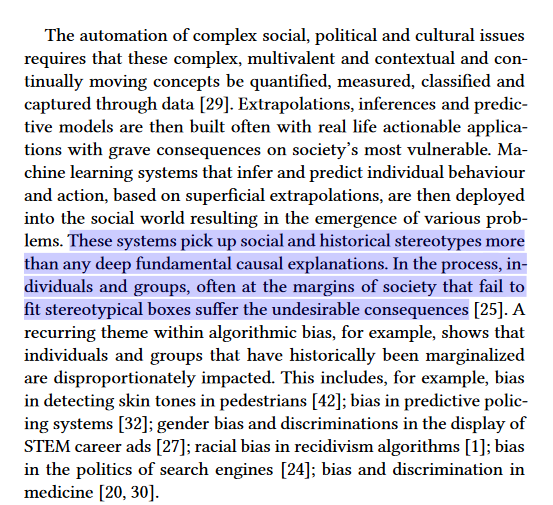 Envisioning a future human-like intelligent system while putting aside such ubiquitous and invasive systems which are a threat to privacy and human welfare, shows misplaced concern, to say the least. 10/ 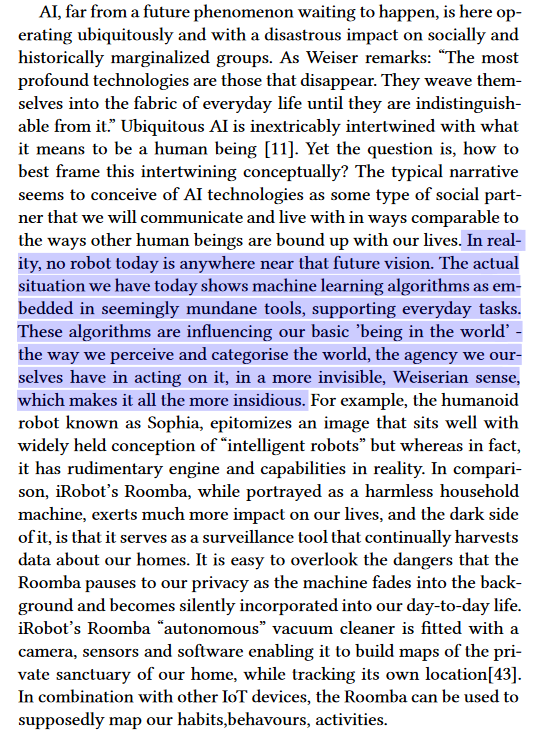 From robots to ‘autonomous’ vehicles to sophisticated image recognition systems, all machines rely heavily on human input. Systems that are perceived as ‘autonomous’ are never fully autonomous but are instead human-machine systems that function on exploitive human labour. 11/ 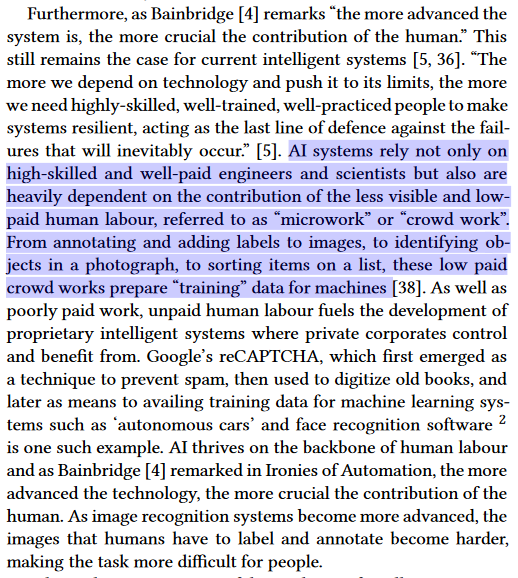 In conclusion: robots are tools used to harm and oppress the most vulnerable members of society. Arguing for robot rights is like protecting the gun instead of the victim. 12/end 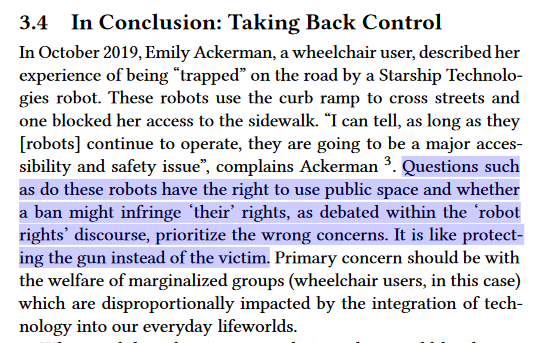 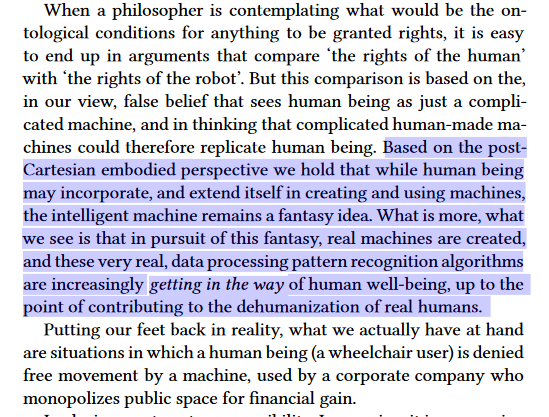 This paper is inspired by many interaction that @theblub and I continually have with many tweeps here and I guess this tweet below marks the start of turning our twitter rants into something substantial. Twitter ftw! https://twitter.com/Abebab/status/1144921155003977730?s=20

Hmm, we anticipated some strong reactions but not this type of hostility but okay 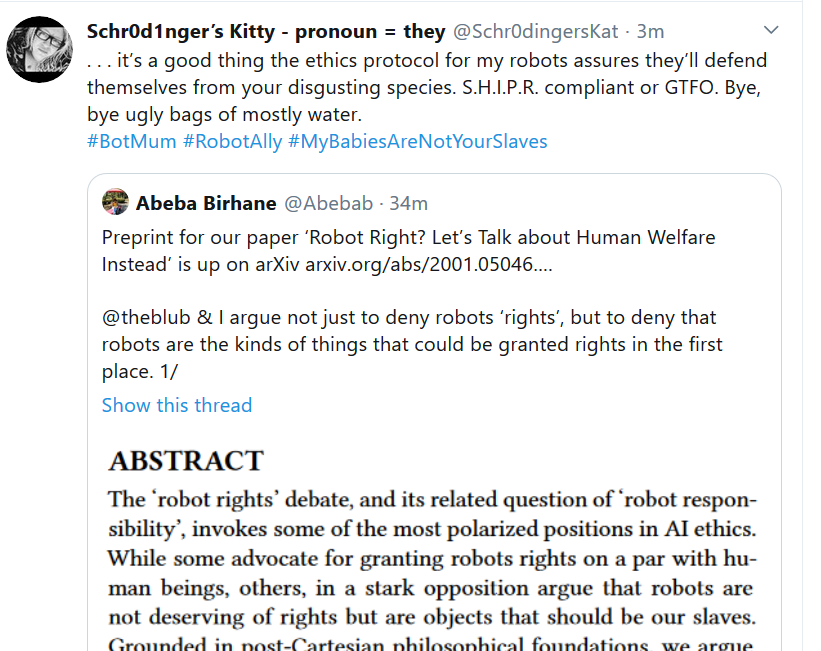 Thanks! We don't explicitly lean on extended mind thesis specifically but as a family of a post-Cartesian approach (which we heavily draw on), it's not incomparable w our view

Find Clark & Chalmers' 'The extended mind thesis' here https://onlinelibrary.wiley.com/doi/pdf/10.1111/1467-8284.00096 https://twitter.com/AngusRobson5/status/1217821584016187397?s=20
Not gonna engage w all the comments b/se I have to work but I will say this (on behalf of @theblub too): if you think you're fighting oppression but are buried too deep in your theoretical abstractions trying to 1st sort out what 'human' is before fighting oppression, think again
To all the robodudes in my mentions, nobody's stopping you to fight for the robots. You can go ahead and write your own paper. You can call it: "Human Welfare? Let's Talk about Robot Rights First"
What about the welfare of animals? Trees? Rivers? Thermostats?... This is called "whataboutism" and doesn't discredit the core of our argument in any way.

@theblub & I choose to specifically focus on the welfare of the most vulnerable. Others can focus on the rest elsewhere.
You can follow @Abebab.
Tip: mention @twtextapp on a Twitter thread with the keyword “unroll” to get a link to it.