I've been promising a new #whyHS2 thread explaining why opposition to HS2 means exacerbating the #ClimateEmergency, and this seems like the perfect excuse 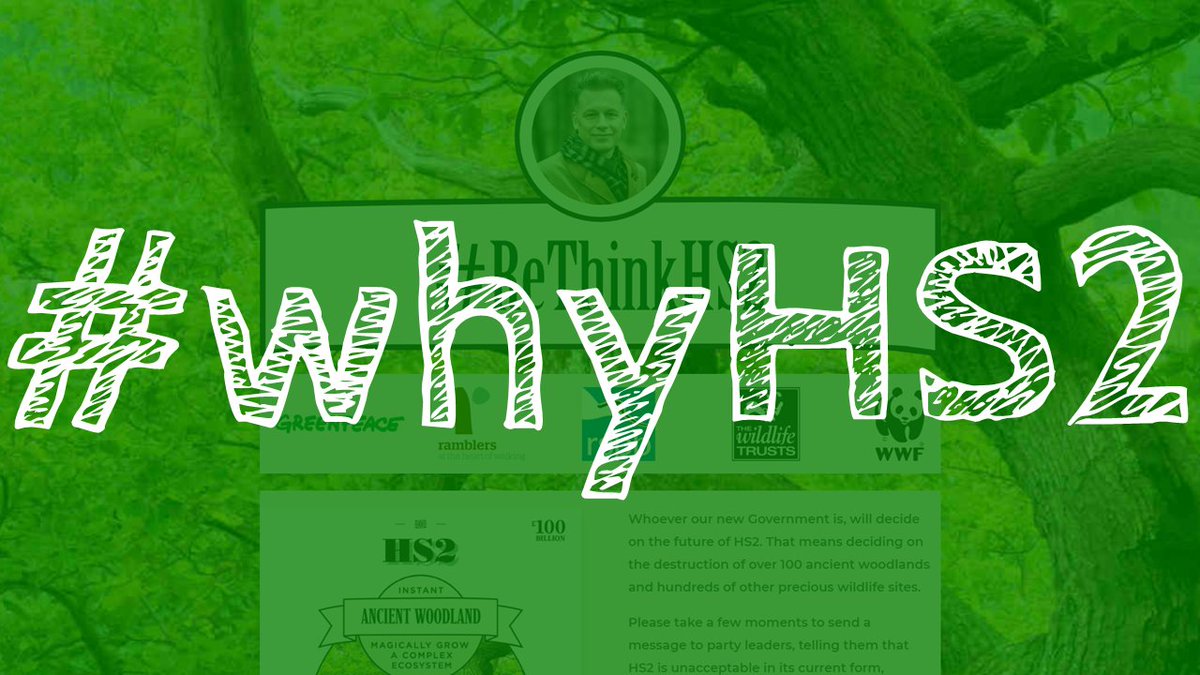 As ever, I'll start by pointing you to this thread explaining the purpose of HS2 from a railway perspective: https://twitter.com/PermanentRail/status/1095442761501851648

Transport is now the UK's biggest source of GHG emissions, and it is still getting worse.

There are lots of underlying reasons for this, but fundamentally it is because too many people/things use road transport. https://twitter.com/PermanentRail/status/1124407862275596289

Whilst lots of the "people" journeys are short, urban ones that should be shifted from cars to active travel modes (walking/cycling), these efforts would also bring more people onto the public transport network.

It also doesn't fix the "things" journeys - HGVs, in other words.
Even a diesel railway emits significantly less tCO2e/t.km than road transport, so a fully-electrified one wipes the floor with road, even if you use electric cars or HGVs.

So we need the railways to absorb a hefty amount of traffic, right?

The trouble is, our railways are already reaching their maximum capacity so fare prices remain high and we can't carry more people/stuff anyway. https://twitter.com/PermanentRail/status/1160995318139371520

The quickest and cheapest way to create the capacity for more local/regional and freight trains is by building HS2.

This isn't about growth for growth's sake; it isn't about "business as usual" - HS2 is all about emptying our roads of cars, vans and HGVs, getting our urban spaces and clean air back, and doing our best to reverse the #ClimateEmergency.
Anyway, back to #RethinkHS2...

An odd theme to hang your pro-ecology, anti-HS2 campaign hat on, in honesty.
It also plainly sets out the lie (yes, LIE) that the whole #RethinkHS2 campaign is based on:

"over 100 ancient woodlands [will] be destroyed by HS2"

I'll just re-assert myself here: this is a complete fabrication.
HS2's route was very carefully selected to minimise damage (such as by weaving through SACs and SSSIs)...

If you look at the map of ancient woodland, it is scattered about like polka dots: 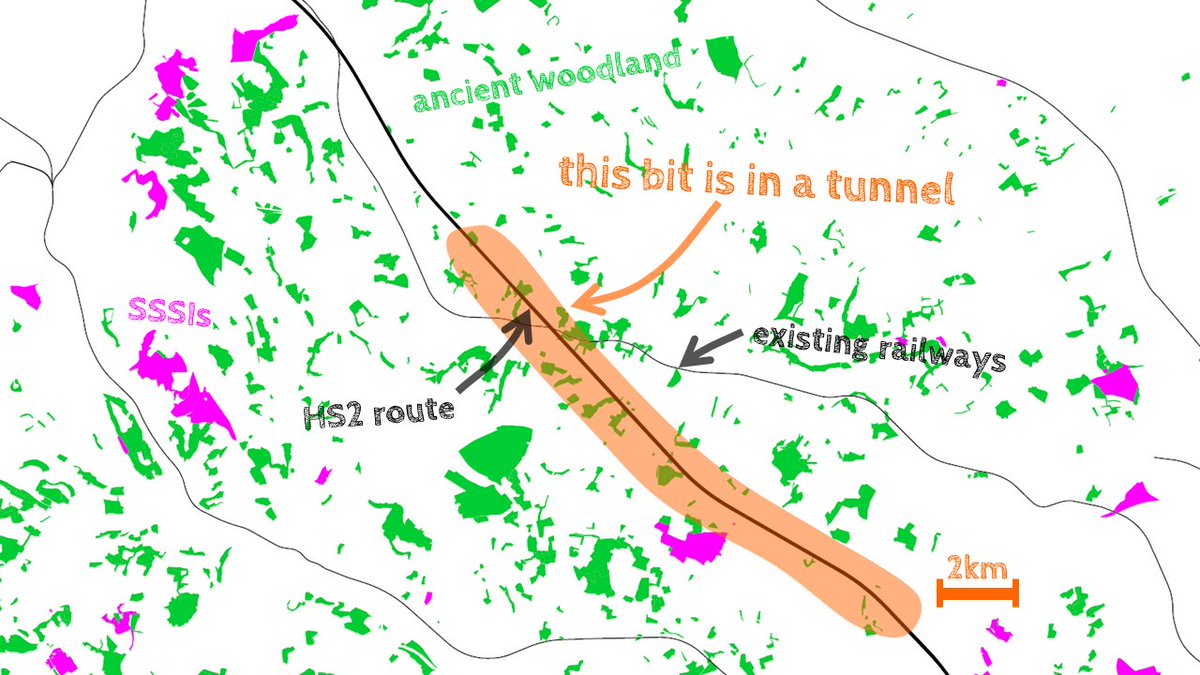 Increase HS2's weaviness and you not only increase its whole-life carbon cost (more curves means more accelerating/braking/maintenance), but you also end up needing to build three new lines instead of one, and that will be much more damaging. https://twitter.com/PermanentRail/status/1158040889736015872

Widening existing railway lines would have a much greater impact on ancient woodland (and everything else) too, as many well-established habitats back right onto them.

Just look at the adjacent London to Aylesbury Line to see what I mean: 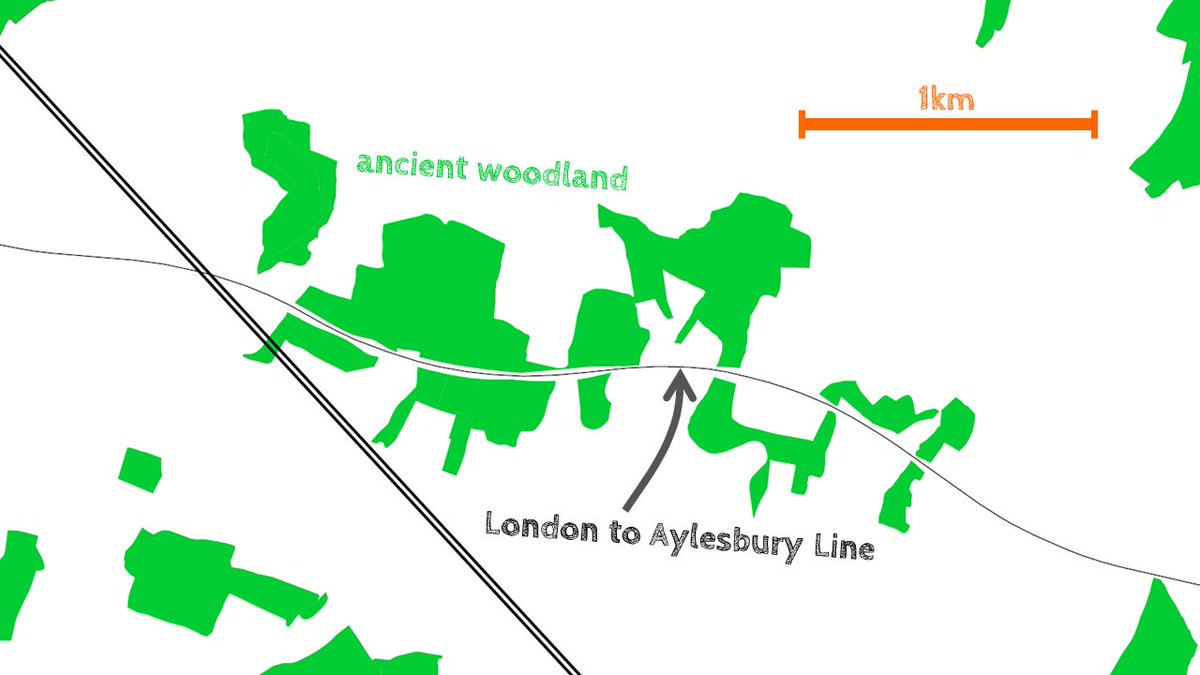 As a result of years of design refinement, the whole HS2 route (from London to Leeds/Manchester) impacts on less than 0.01% (that's less than 1/10000th) of the UK's ancient woodland.

I'll quote from one of the (normally hostile) House of Lords committees scrutinising the project:

"All ancient woodland is irreplaceable, but the loss of less than one [hectare] out of about 11,000 in the [Chilterns] AONB is, we consider, a remarkable achievement."
#RethinkHS2 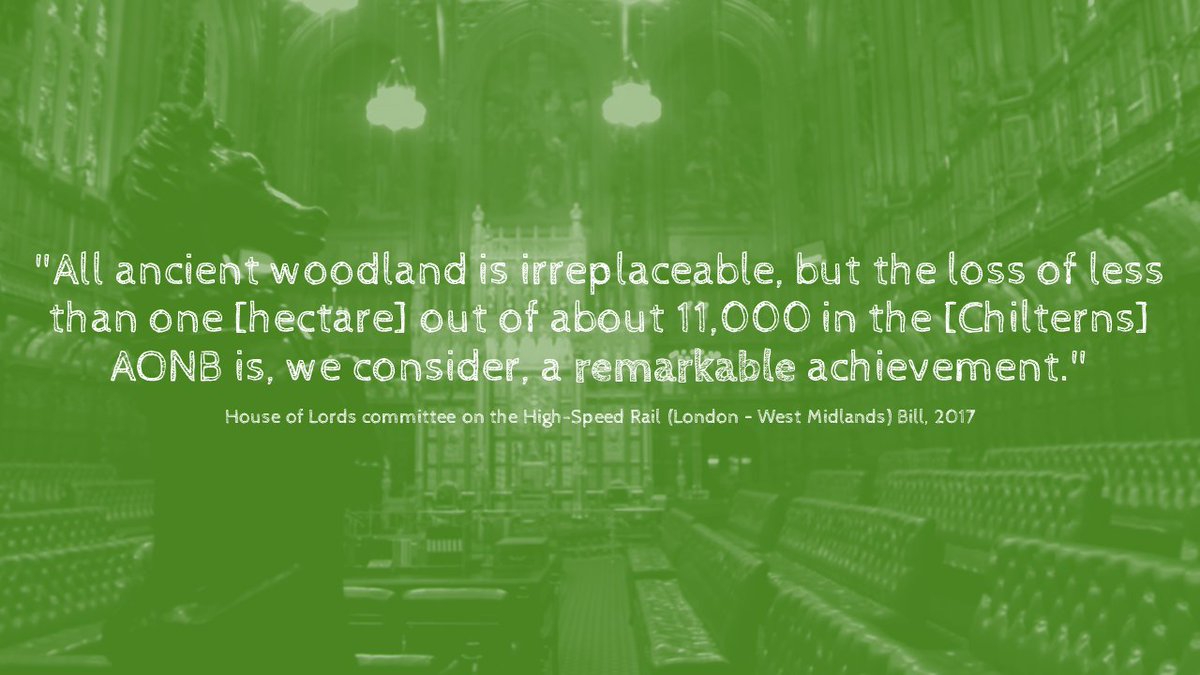 So, that's the "100 ancient woodlands destroyed" claim debunked... But what about the others?

From this point onwards I will be creating the definitive #whyHS2 thread, tackling each argument against it as swiftly and succinctly as possible...
(Whilst I am brewing those up, and if you want some extra reading about the green case for HS2, I can strongly recommend @safemyth's independent report on the subject: https://twitter.com/GarethDennis/status/1193844488411779073)

You can follow @GarethDennis.
Tip: mention @twtextapp on a Twitter thread with the keyword “unroll” to get a link to it.