Read on Twitter
The Canadian Taxpayers Federation ( @taxpayerDOTcom) is a sham organization - fake grassroots - in my opinion.
Here's my evidence: (thread)
#ableg
#abpoli
#cdnpoli
In '89, notes AB conservative Link Byfield founded the “Resolution One Association”. A main corporate object (snip below) was to cut spending, not increase revenue, which's a little ludicrous to me. If deficits are bad, why limit governments’ ability to deal with them?

Members were allowed to attend annual meetings, view financial statements and elect a board. You know, normal stuff that most of us would expect from a functioning and transparent organization.
This becomes important later on.

In 1990, the organization changed its name to the Canadian Federation of National & Provincial Taxpayers.

Another name change a year later to the Canadian Taxpayers Federation. 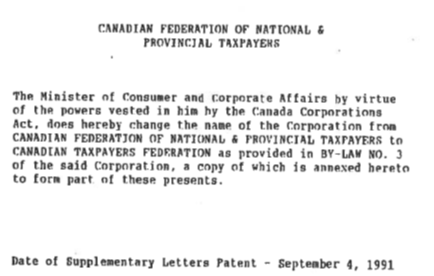 Only Associate Members of the @taxpayerDOTcom are allowed to see the audited financial statements.
This gave the CTF the ability to cut out its grassroots. It became an Astroturf organization at this point.

It should be noted that at the time of this change (1993) conservative Premier Ralph Klein accused @taxpayerDOTcom exec director @jkenney of “robbing the old senior citizens of their money” https://pressprogress.ca/ralph-klein-accused-lobby-jason-kenney-led-of-spreading-lies-and-robbing-seniors/
Ralph Klein Accused Lobby Jason Kenney Led of Spreading Lies and ‘Robbing Seniors’

https://pressprogress.ca/ralph-klein-accused-lobby-jason-kenney-led-of-spreading-lies-and-robbing-seniors/
Fast forward a bunch of years. I tested the @taxpayerDOTcom adherence to their bylaws. I tried to become a member. To my surprise, “the only “members” are the board of directors themselves.
Here's an email from the VP Operations at the time. 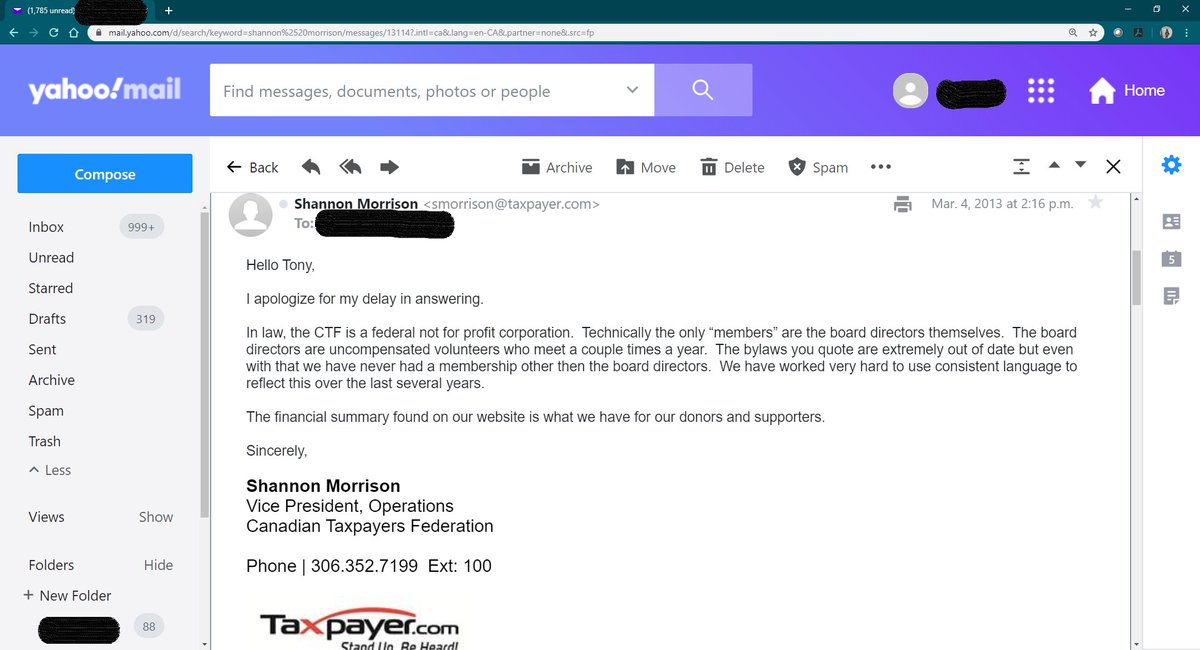 I pitched this tidbit to @djclimenhaga who write a great little piece about the @taxpayerDOTcom having only 5 members.
You should read it: https://albertapolitics.ca/2016/10/taxpayers-federations-true-astro-turf-nature-finally-worms-way-public-consciousness/
“Taxpayers Federation’s” true Astro-Turf nature finally worms its way into public consciousness -...

https://albertapolitics.ca/2016/10/taxpayers-federations-true-astro-turf-nature-finally-worms-way-public-consciousness/
@djclimenhaga’s work struck a nerve with the @taxpayerDOTcom non-member Scott Hennig who affirmed that membership is only for board members because the founders believed “the organization became more effective that it could be subject to takeover by groups hostile to the CTF.”
Scott provided no evidence for the incredible assertion that the @taxpayerDOTcom could be taken over by "unions and various other agitators for big government"

https://www.taxpayer.com/blog/setting-the-record-straight--how-the-ctf-is-governed
@taxpayerDOTcom’s post provoked this nice opinion piece in the CBC. “By the CTF's own argument, it appears that it is not a citizen's advocacy group, but a donors' advocacy group,” writes @DFLamont https://www.cbc.ca/news/canada/manitoba/canadian-taxpayer-federation-opinion-lamont-1.3802441
OPINION | Canadian Taxpayers Federation has 5 members — why should we care what they think? | CBC...

The Canadian Taxpayers’ Federation has been around since the late 1980s, selling itself as a populist “citizens advocacy group” looking to cut waste and ensure accountability in government. But does...

https://www.cbc.ca/news/canada/manitoba/canadian-taxpayer-federation-opinion-lamont-1.3802441
The evidence points to the @taxpayerDOTcom being a sham organization, as I wrote earlier (that’s my opinion – I have to libel-proof this, I guess)

But why does it matter?
Well, the @Alberta_UCP runs the show here in #ableg.

@jkenney is the Premier and the former lead flack of the group.

Unsurprisingly, CTF quotes now appear regularly in gov't news releases lauding the Kenney gov't moves.
In summary: the @taxpayerDOTcom should be dismissed as an Astroturf organization (fake grassroots) that only has 5 members (its board) and it's not even clear it represents their interests or some other shadowy donors behind the scenes.
That ends my treatise.
If notable CTF non-members @franco_nomics or @awudrick would like to offer counterpoints, please offer them up.

-30-
Addendum: the encyclopedic @davecournoyer notes that if you worked for the @taxpayerDOTcom, there's a high likelihood you'll get a job or patronage appointment from the @Alberta_UCP government.
#AbLeg
Mitchel Gray was Provincial Director for Alberta for the CTF back in the 1990s and now has a good job with the @jkenney government, thankyouverymuch.

https://www.alberta.ca/assets/documents/pscontracts/contract-gray-mitchel.pdf
Former CTF intern John Whittaker is now the Director of Operations in the Premier's Office. 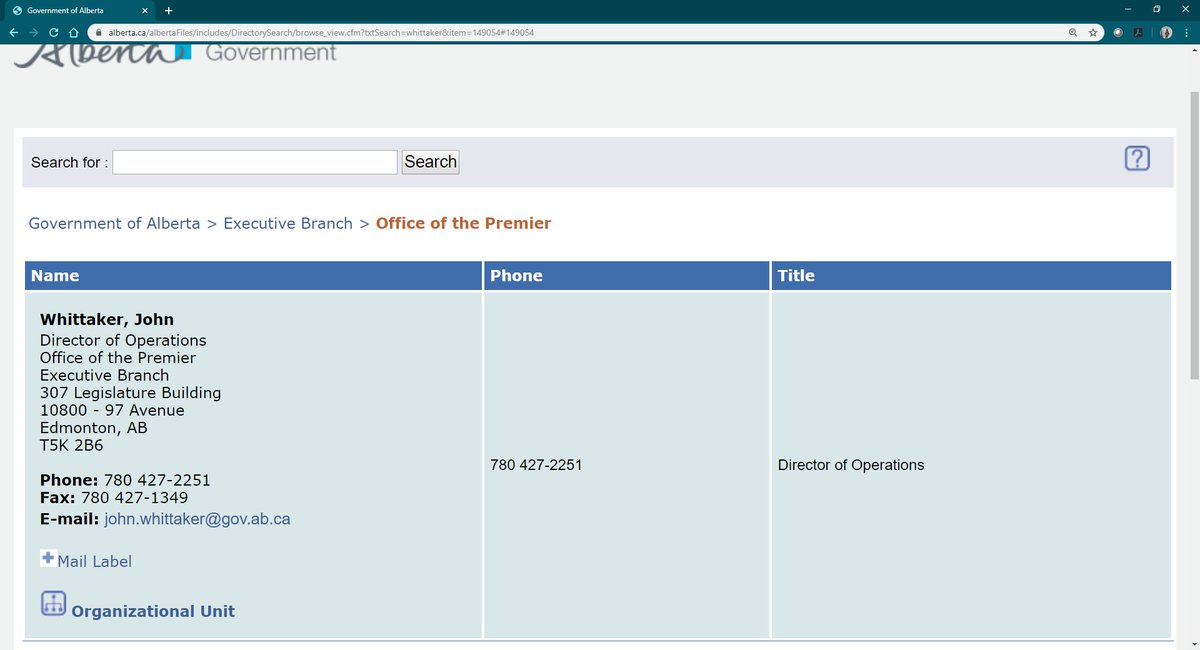 And former CTFer @ajcrooks, president RichCrooks Enterprises (yes, that's the name of his company) has been appointed to a bunch of boards.

The shadowy, undemocratic, Astroturf outfit, the @taxpayerDOTcom has a lot of influence on the Alberta government.
~fin~
I almost forgot something else.
A gov't lawyer asked to postpone a constitutional challenge of the election finance law brought by the @taxpayerDOTcom.
Great reporting by @charlesrusnell and @jennierussell_ here.
This is concerning.
#ableg https://www.cbc.ca/news/canada/edmonton/election-finance-law-very-concerning-1.5374804
Potential weakening of Alberta election finance laws 'very concerning,' political scientist says |...

An Alberta government lawyer’s arguments in court last week signal the United Conservative government intends to quietly weaken the province’s election finance law, in a move that would be “very...

https://www.cbc.ca/news/canada/edmonton/election-finance-law-very-concerning-1.5374804
You can follow @Tony__Clark.
Tip: mention @twtextapp on a Twitter thread with the keyword “unroll” to get a link to it.