Read on Twitter
We need to talk about the Alt-Right Proper versus Bannon's Alt-Right.

Bannon (via Milo) used that emergent movement moment to inject explicit white nationalism into the conversation. 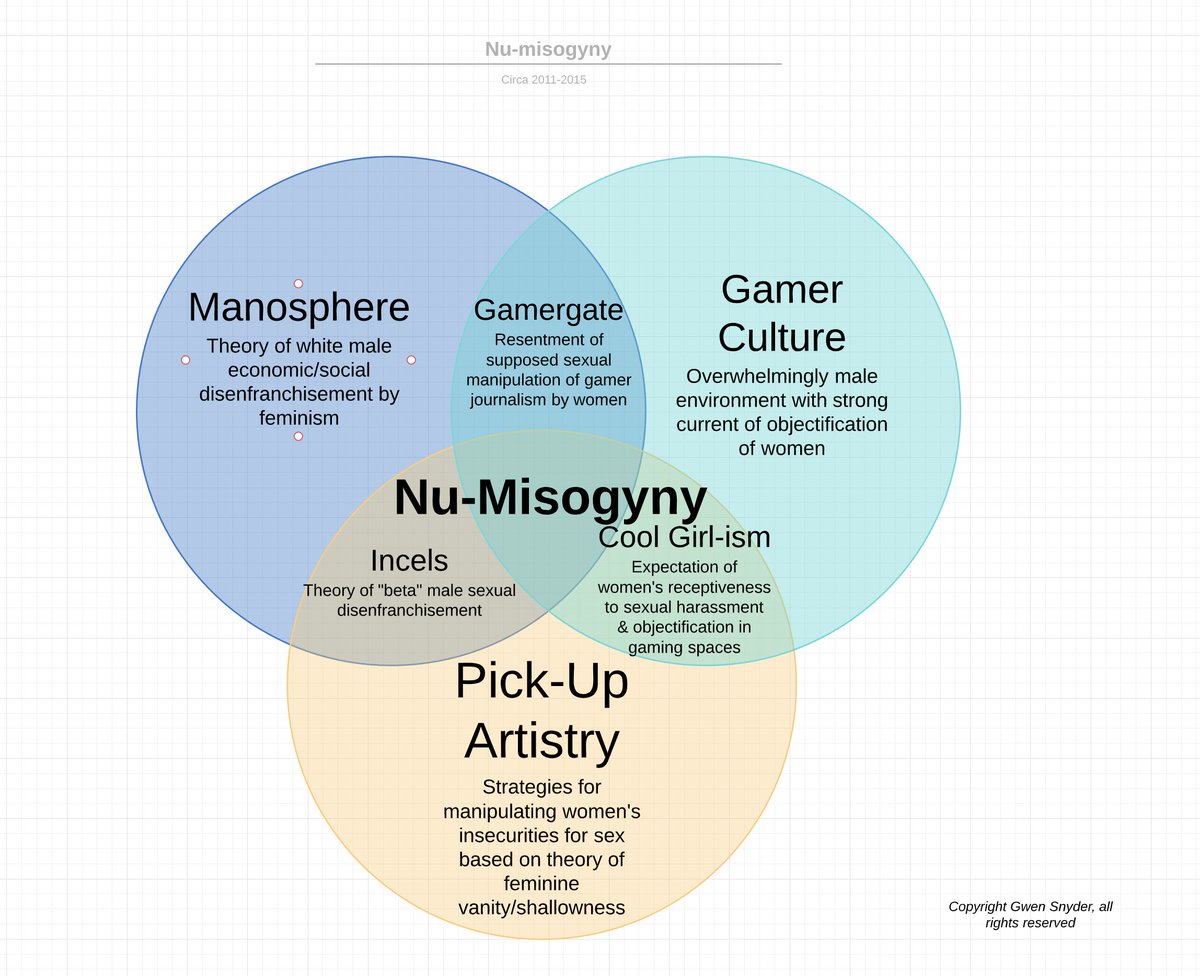 There are some very telling just-pre-2016-election emails where Milo and Bannon pretty explicitly scheme with folks like Daily Stormer's founder about how they're going to introduce all Milo's new Gamergate friends to Bannon's pet white nationalists. https://www.buzzfeednews.com/article/josephbernstein/heres-how-breitbart-and-milo-smuggled-white-nationalism
Here's How Breitbart And Milo Smuggled Nazi and White Nationalist Ideas Into The Mainstream

https://www.buzzfeednews.com/article/josephbernstein/heres-how-breitbart-and-milo-smuggled-white-nationalism
Gamer culture has pretty consistently had a reputation for casual racism, Manospherists latched onto weird genetic determinist theories half-a-goose-step from eugenics a while back, PUAs systems of sexual valuation have always been pretty racialized, but
from all the research outright Nazism was pretty fringe for nu-misogynists until Bannon and Milo realized they were a community ripe for white supremacist radicalization.
You know what really wasn't a defining feature of the Alt-Right Proper (Richard Spencer, etc) prior to 2015, or even organized white supremacy 1995-2015?

A taste for accelerationist mass murder sprees, a la El Paso.
Nu-misogyny, though?

There's a reason gamer culture took such glee in videos of players mowing down prostitutes in-game when Grand Theft Auto provided the option.

There's a reason Grand Theft Auto offered that option.
That reason stems from the same impulse that prompts so many members of the manosphere to engage in murder fantasy and pro-rape advocacy, the same impulse that inspires Pick-Up Artists like Roosh V to advocate coercive domination of women.
That impulse is one of virulent, violent misogyny, and it's the impulse that inspired incel mass murderer "Perfect Gentleman" E. R***r's rage-fueled Isla Vista killing spree in Isla Vista in 2014.
Again, nu-misogynist community was never exactly anti-racist, particularly the manosphere, the most purely hate-rooted of the movement's three regions.

Communities of hate are rooted in resentment-- the scapegoat is just a explanation of whatever it is they resent.
It's not hard to inject new hatreds into them, because they're comprised of folks fixated on naming simple, external reasons for their suffering.

The identity of the scapegoat matters less than the simple externalization they allow.
Unless it conflicts with their existing ideology or overlaps with most members' identities, violently hateful communities are unlikely to pass up an additional scapegoat.

A good chunk of nu-misogynists were only too happy to add Blacks, immigrants, and Jews to their hate list.
The post-Gamergate flood of nihilist, pro-terror nu-misogynists into Bannon and Milo's millennial white supremacy is evidenced in the tonal and linguistic shift that occurred in that community at that time.
With the Isla Vista spree, lone wolf mass murder fantasy and planning really crystallized as a defining trait of "blackpilled" incel community.

Its members talked about the murderer as a "Saint," discussed "high scores" (a gamer culture-inflected term for kill counts).
During and after Gamergate, these murder strategy discussions started popping up in online white supremacist community, particularly 8chan, a forum created for folks too overtly terroristic, pedophilic, and/or violently misogynist for even 4chan's high threshold.
"Blackpilled" became a general term for nihilistically anti-woke extremists who believed only mass terror would wake up the sleeping masses.

Less than a year later, Daily Stormer reader D. R**f would kick off the era of white supremacist accelerationist murder in Charleston.
Even R**f, who clearly took inspiration from this emerging nu-misogynist-driven culture of pro-terror millennial white supremacy, was uncomfortable with the skyrocketing levels of murderously violent attitudes towards women the nu-misogynists brought with them.
Even as he railed against the supposed evils of miscegenation in his manifesto, he tempered it with a plea to his fellow white supremacists to chill out when it came to rhetoric around white women in interracial relationship.
R**f closed the anti-Black portion of his manifesto--by far its longest section--with this appeal:

"I have noticed a great disdain for race mixing White women within the White nationalists community, bordering on insanity it. These women are victims, & they can be saved. Stop."
That timeline:

The Nazi "intellectual" Alt-Right Proper has existed for at least a decade.

Bannon's "Alt-Right" is his arranged marriage of violent accelerationist nu-misogynists & Nazis, and is singularly responsible for present wave of white supremacist murder sprees.
When we assess the impact of Bannon's evil, we can't forget his chillingly callous decision to populate Trump's base and Bannon's white nationalist movement with an online culture of misogynist accelerationists already high and gleeful off their first perpetrated mass killing.
Everyone wants to know where accelerationist Nazi terror came from?

It came from Bannon's decision to hyper-charge his lukewarm, fringe little collection of pseudo-intellectual white nationalists with the heady terrorism and violence of nu-misogynist online community.
Centrists want to blame Trump, but voting Trump out won't fix this.

Trump was just one of a number of hugely successful Bannon-driven ploys to mainstream explicit far right, white nationalist politics in the United States.
It's tempting to say, all this is terrible, thank God that Bannon is gone, we just have to weather the storm.

Except, this isn't a story of Bannon's genius. It's a story largely of Bannon's failure and hubris.
Bannon wanted a populist white nationalist movement he could control, built around a manipulable ethic of national identity-based white working class solidarity that groups like Matt Heimbach's Traditionalist Worker Movement aimed to create.
Bannon's ambitions extended far beyond Trump's presidency, and he entertained a brief 2015-2017 era of significant influence before his career tanked after the events of Unite The Right in Charlottesville.
Trump doesn't fire people for being white supremacists-- just look at Stephen Miller.

Trump fires them for weakness.

Unite the Right in Charlottesville showed that Bannon had wholly lost control of his own creation.
Bannon had attempted to manufacture a populist white nationalist movement, a base whose sense of economic disenfranchisement he could manipulate and use to push isolationist immigration and economic policy in accordance with the desires of his billionaire patrons, the Mercers.
What he had ham-handedly managed to create, though, was a rabidly violent & resentful online warren of extremists increasingly interested in a strain of bloodthirsty fascism that renounced electoral solutions & extolled books preaching that Charles Manson hadn't gone far enough.
Events in Charlottesville gave lie to Bannon's pretense of creating a broad, unified white nationalist Alt-Right, exposing the tenuousness of relationships between Patriot Movement militia-ites, the MAGA crowd, post-skinheads like Proud Boys, & emerging fascist accelerationism.
Those events in 2017 left the Bannon-style civic nationalists like Proud Boys and Identity Evropa vulnerable and embattled, even as the violence bolstered the spirits of those who populated "blackpilled," nihilist forums like Ironmarch and used 8chan as a radicalization site.
This burgeoning nazi accelerationist culture advocated lone wolf mass murder-suicide, praised the Unite the Right murder, fanboyed the terrorist activities of the Ironmarch-spawned Atomwaffen, and "sainted" and started podcasts named for Charleston shooter D. R**f.
Far more than nearly all other white supremacist and nationalist groups, the nazi accelerationist movement is defined by its glorification of mass murder and sexual violence, its leaders assuming pseudonyms like "Rape" and declaring that "No Political Solution" is possible.
Where Bannon championed populist electoral strategy, nazi accelerationists advocate a total destruction of the social order (Manson's "Helter Skelter," what they term "Boogaloo") sparked by individual terrorist acts of mass violence.
The Pittsburgh synagogue shootings, the Poway murders, the Christchurch massacre, the El Paso Walmart spree, the Army bomber plot?

Each of these supposed "lone wolf" incidents are the direct product of this organized online world.
It's a world that's organized, yet loosely structured around atomized leaderships with undefined membership bases.

It's a hydra with no clear head, one that shows open contempt for formal organization or official leaders like Trump.
Call it "online nazi accelerationism," call it "Terror Telegram," call it "Gen Z and millennial white supremacist terrorism."

Just don't call it the "Alt-Right."

The Alt-Right as Bannon defined it existed only just long enough to spawn this culture of terror, then dispersed.
We have to address it for what it is, and that means addressing it as an online terrorist movement spawned by and now completely beyond the control or influence of billionaire-funded, callow Republican operatives.
To contain this threat, we have to quarantine it, deplatforming it in the direction of more and more obscure social networks, isolating it from the populations it seeks to infect.

Its core members seek to inspire, not actually be, lone wolf killers. In isolation, they'll fail.
Inoculation is critical, too. Andrew Yang is a total dick for suggesting that the solution to violent white supremacy is allocating even more resources towards the education of boys while overlooking girls, but education around hate, its roots, & its history is vital.
Hygiene is also always, always necessary to stop the spread of infection.

Through direct action & public pressure, we do need to force social media companies to address their platforms' poor hygiene, their tendency to breed and facilitate the spread of violent extremism.
All of these tactics and strategies are important in the short-term, but ultimately they're just containment strategies.

Until we combat structural misogyny, racism, and economic injustice, our culture will still be a welcoming petri dish for violent white supremacist terror.
We can't lose sight of the lessons of Bannon's role in creating the Frankenstein monster of online nazi accelerationism or what his role signifies.
We have to set up safeguards against the billionaires who would fund opportunists in the creation of a terrorist movement for short term political gain.

We have to think critically about what it means that they can buy elections, & about the terrible impacts of those purchases.
We have to confront the fact that the party running in "opposition" to the Bannons and Mercers of our country runs candidates unwilling to take meaningful action to circumvent their influence or counter the rising tide of economic inequality breeding deep, exploitable resentment.
We must deal with the reality that these same politicians are too craven to take action against the social media and tech companies that profit from creating worlds where disinformation and extremism spread like wildfire, and ask them-- and ourselves-- hard questions.
Because if we don't change our political reality, all the containment in the world won't prevent this from happening again the very next time a Rebecca Mercer teams up with Steve Bannon to play social engineer, with devastating, murderous results.
And in the meantime, children will keep dying quietly in the shadows of the policy and economic victories the hyper-wealthy buy at the cost of human life, the cost of the lives lost not just to terrorism, but to racism, poverty, and gendered violence.
/thread, and Jesus Christ, two terror attacks have occurred in the space of me writing this thread
You can follow @gwensnyderPHL.
Tip: mention @twtextapp on a Twitter thread with the keyword “unroll” to get a link to it.