Read on Twitter
One interesting mega trend happening out there today is a stress test of the whole concept of the "nation state".

Hold that thought.
What is important to realize that nation states are not a given. There are other ways humanity has organized itself over the centuries.
We have long had city states, where a rich city like Venice is formed as an entrepot where trade happens and people live. These cities are smaller than nations & have varied ethnicities but have some capacity for self-defense and self-rule. Singapore & Dubai are city states.
We have had multinational states like the EU.

We have had empires composed of several subject nations like the British Empire.

We have had Confederations of sovereign states.

There are many varieties of human organization. The nation state is one of many choices.
The origins of the modern nation state are murky but seem to grounded in trade, mercantilism, the rise of capitalism, the ability to map the world and other enlightenment ideas.

What nation states enabled (and depend on) is cultural unity.
The modern nation state generally has a unified defense, a unified compulsory education system in a given national language, the provision of welfare and government services. It will also maintain legitimacy via regular elections that help the state make & update policy.
Generally, large nation states had differing regions and accommodated them in the interests of national unity. Rural areas were considered necessary since Roman times for the production of food and urban centers for trade. The interests of these two were traded off for unity.
This system led to the rise of powerful countries like the USA, Germany & France.

These were all examples of how to create and maintain a strong, stable, varied & productive nation state.

All these had cultural unity, permanent national institutions & independence.
Lately things haven't been going so well for the nation state. The rise of the Internet, urbanization, immigration and globalization has led to the decline of cultural unity & urban-rural cohesion in almost every nation state.

This is not some American thing. It is global.
Across the world, because of technology, trade and knowledge work, we see a trend towards massive urbanization.

Even America, which used to have a very large rural population has been left with a relatively tiny 16% that live in rural areas.

The job growth is in the metros. 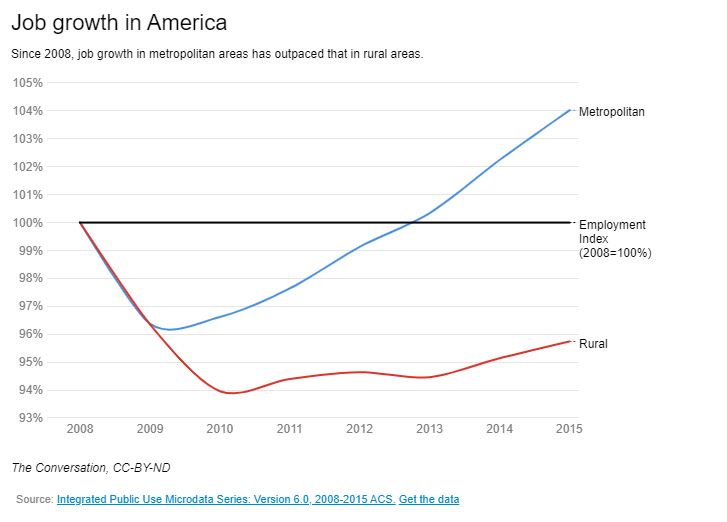 85% of US GDP was created by 259 large cities in 2010 and that trend is just accelerating. The cities are the moneymakers in the new world.

Across the world, rural areas/small cities are becoming an appendix from an economic perspective. 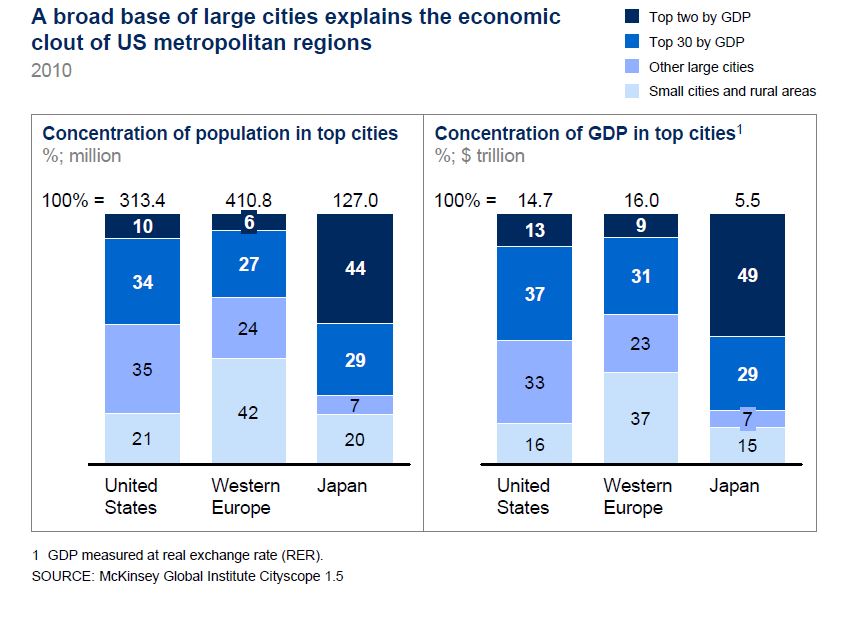 People will naturally go where the money and the future are and this trend of urbanization is just accelerating. Booming suburbs around large cities, especially in the US, allow workers access to city jobs and still enjoy a high quality life with open spaces if they want.
So what does this mean?

This trend has massive implications for the entire concept of the nation state itself.

We started off having large, powerful city states like Venice, Athens, Carthage etc. and it would seem that we're inching inexorably back to the future.
As urbanization continues and technology improves, the urban-rural divide will become more pronounced. Speaking from a purely analytical perspective, the rural areas seem headed towards what I call "Three R's": Resorts, Robots and Retirement.
The natural beauty of rural areas will always attract retirees who wish to live peacefully away from the frenetic life in urban metros.

Ditto for resorts and vacation spots. People will always want to relax in nature.

Farming is moving towards robotics and this will continue.
So what is the implication on the nation state?

It would seem that the balance of power, money, energy, growth and population is headed towards cities. These will see their power dramatically increase.

What will it mean for a nation state to have cities being that strong?
Well, regardless of things like the Electoral College in the USA, the future will be cities, the question is what happens to the nation state? Is it possible to have that prerequisite of a "national culture" when there are such vast gulfs between urban life & rural life?
Earlier, prior to globalized trade, the cities knew they depended on food and sustenance from local rural areas. This made cultural cohesion mandatory & important for survival.

But think about today, does a Londoner really depend on British wheat?

What forces cultural unity?
This divide, which will continue deepening, is at the heart of many huge issues you see around you every day.

It underlies the tension between flag-waving nationalist types anchored in an earlier cultural frame with de-nationalized cosmopolitan rich people in modern Venices.
What we might be seeing is the slow erosion of the nation state concept and a re-assembly of national life into earlier city-state models.

This is not some trivial thing. Nation state defense is still a major issue.
The trend is clear: globally, cities have the money and the influence and can eventually obtain protection.

The test of whether a nation will continue as is might simply be: "do your really have a unified culture across your nation?", if not you'll split into regions that do.
We have taken the nation state for granted.

We believed that nation states were thousand year things but global trends call these assumptions into question.

Whether we see the rise of city states or whether nation states hold together is a very important question.

//FIN
You can follow @fmbutt.
Tip: mention @twtextapp on a Twitter thread with the keyword “unroll” to get a link to it.