Read on Twitter
The Man Who Solved the Market - Gregory Zuckerman
Excerpts, screenshots and my notes along with it #ForOwnReference
Entertaining? Hell yeah

Actionable secrets? Are you kidding me? If you're looking for one then quit reading right here, I mean don't read any finance book like ever

Nuances & interesting tidbits? Plenty of them, Zuckerman did his research for sure.

Beware, it's a long thread
"The IDA (Institute for Defense Analyses) taught Simons how to develop mathematical models to discern and interpret patterns in seemingly meaningless data. He began using statistical analysis and probability theory, mathematical tools that would influence his work."
"To break codes, Simons would first determine a plan of attack. Then, he’d create an algorithm—a series of steps for his computer to follow—to test and implement his strategy."
Note - Importance of pseudo-code before actual coding
Notes - Simons was good at listening to others and knowing people. After IDA he built a world-class math department for Stony Brook University using his connections in IDA.

Later he found his hedge fund and hired math professors from SBU (Later he donated a huge sum to the Univ)
Berlekamp was my early favorite character in the book. He was the 1st to recommend short time frame trading from long term momentum trading to reduce risk and play several small bets which improved the fund's performance (Kelly of Kelly Criterion was his prof)

Berlekamp was a hardcore qunat with total reliance on the machine while Simons approach was to let machines run but don't rely on models all the time especially during volatility. Eventually, Berlekamp quit for academia 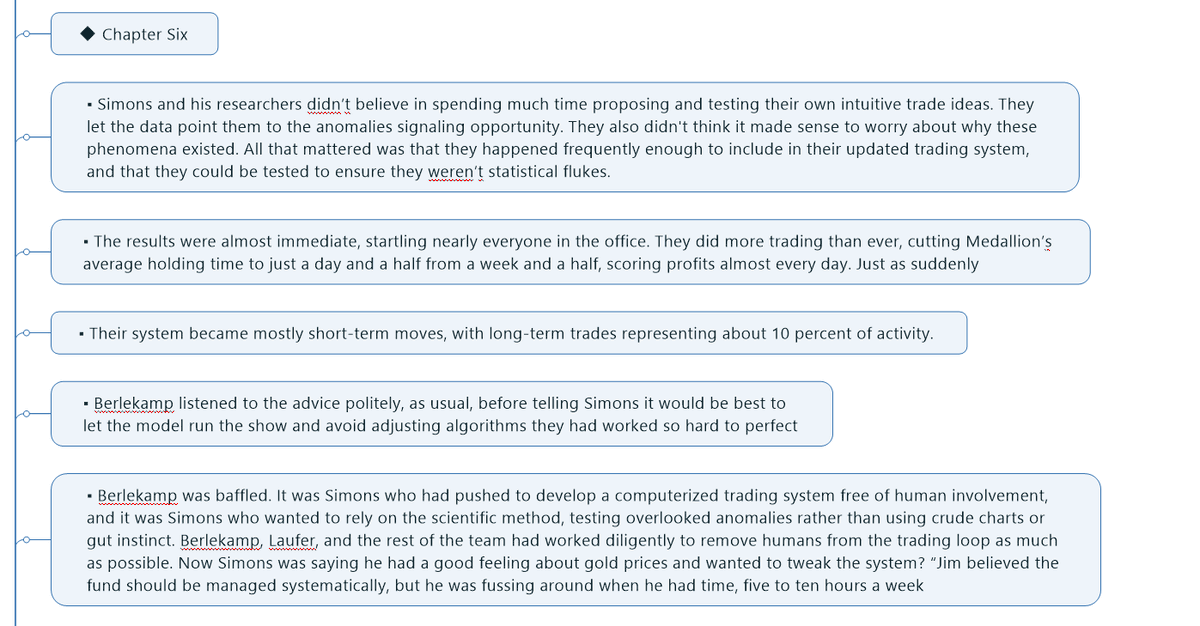 Note - Medallion was in trouble in 2002 when market suddenly started falling after a nice uptrend.
Its often said & rightly so that don't tweak your system frequently else you'll start curve fitting but if you don't then you may not find the logical bugs.

Note - In 2007 Medallion was in trouble like 2002 and Simons decided to override the system and started selling Medallion's positions.
In hindsight maybe he was wrong but at that time you never knew, 20 std deviation drawdown was his trigger

" On the whole, though, Simons maintained faith in his trading model, recalling how difficult it had been for him to invest using his instincts. He made a commitment to refrain from overriding"
Note - Even though Simons said in many interviews that Medallion doesn't care whether signals generated by their model make any sense or not, but the answer is more nuanced like many things in life.
Here is more on which type of signals they'd include & which they'd discard

"Laufer made an early decision that would prove extraordinarily valuable: Medallion would employ a single trading model rather than maintain various models for different investments and market conditions.
Narrow, individual models, by contrast, can suffer from too little data"
Note -Since they were trading various markets with one model it improved Medallions Sharpe ratio as well, in 2003 it touched to crazy 7. This allowed Medallion to use extra leverage.

Here is more on their use of options for leverage (& avoid taxes :) )

If Medallion making so much money then who is losing it? Here is Simons reasoning

Position sizing is done by the model itself
" A consistent winner, for example, might automatically receive more cash, without anyone approving the shift or even being aware of it."
Note- in the latter half of the book there is a lot of Mercer and his rightwing politics. He was co-CEO of Medallion w/ Brown, both were speech recognition experts made important contributions in Medallion's success especially in Equity. He was instrumental in Trump's campaign
End of the thread ;
Linking my earlier tweet here for the sake of continuation https://twitter.com/BeingHorizontal/status/1194712596739313664

You can follow @BeingHorizontal.
Tip: mention @twtextapp on a Twitter thread with the keyword “unroll” to get a link to it.