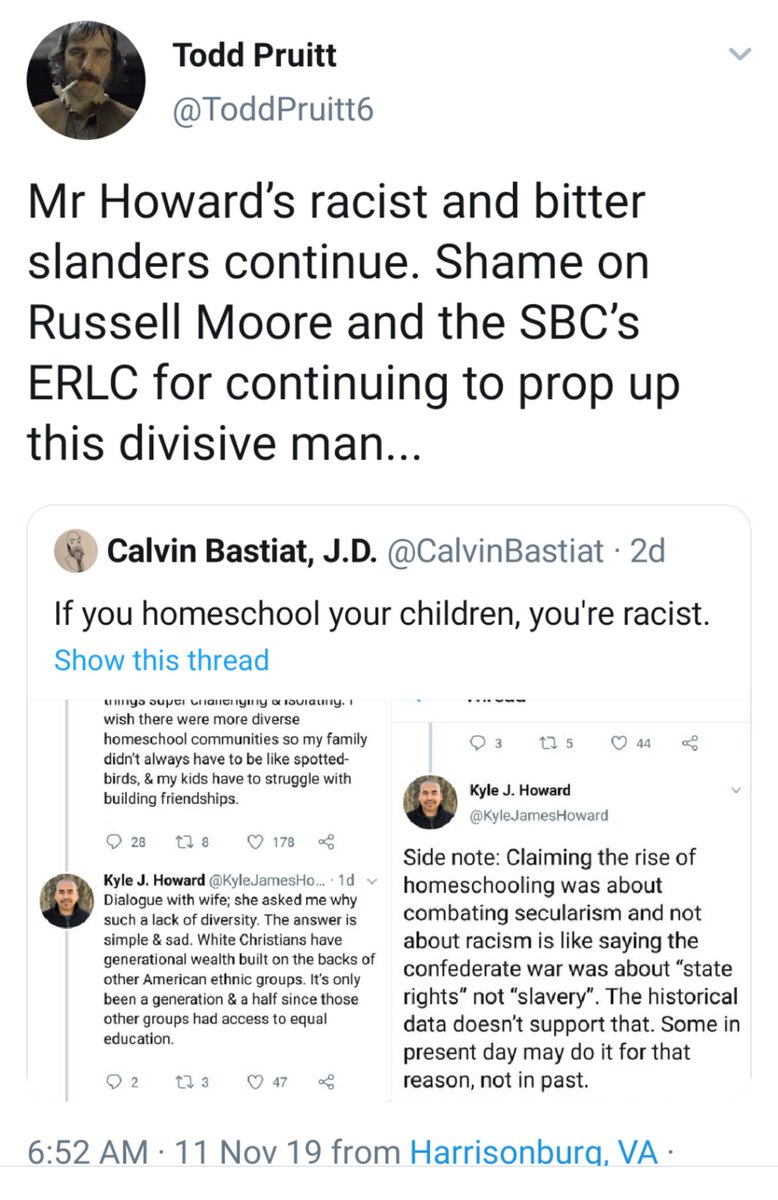 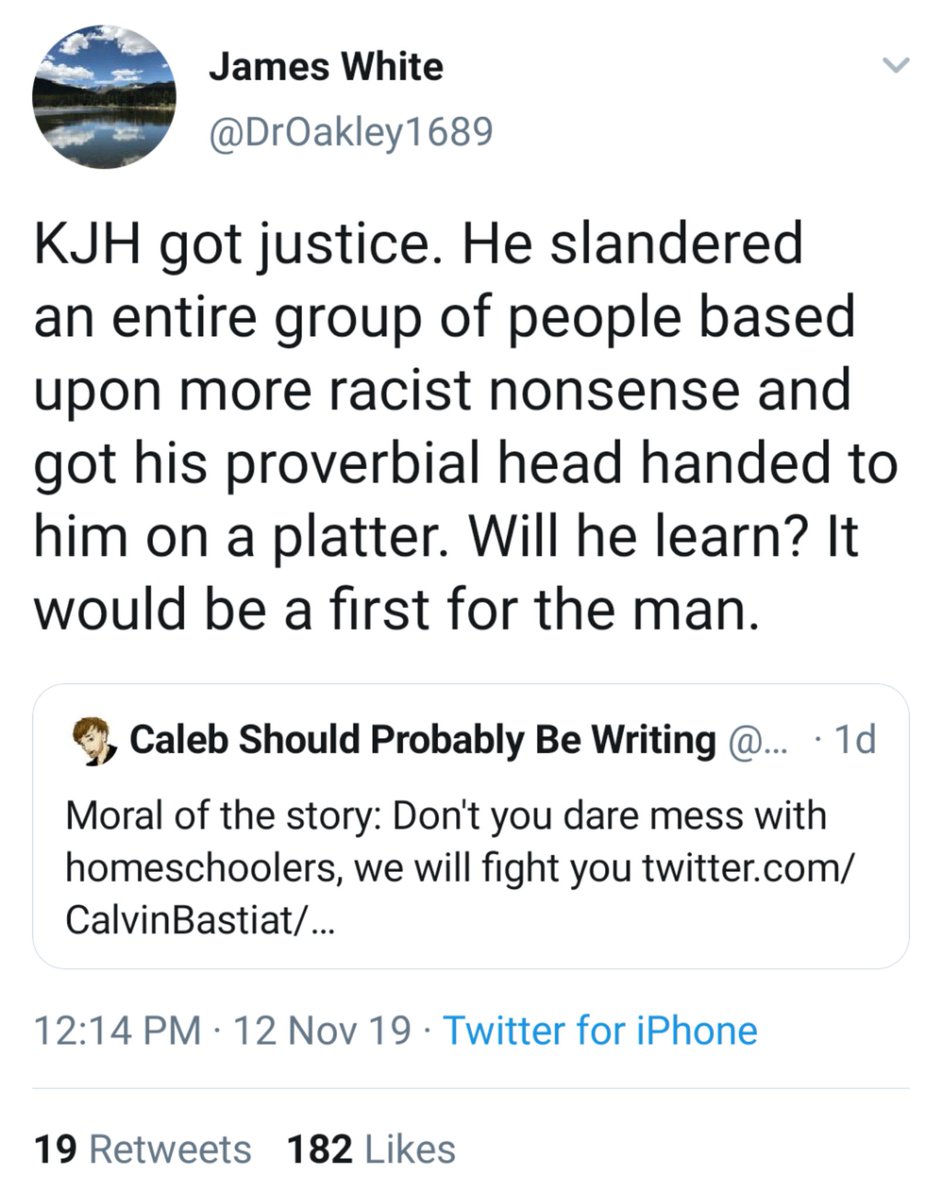 2/ In the first tweet, he speaks of his own experience and frustration. Is there anything controversial here? Is there a reason to believe he is lying? Of course not, the statistics are pretty straightforward on who is homeschooling and who isn't, thus supplying the group pool. 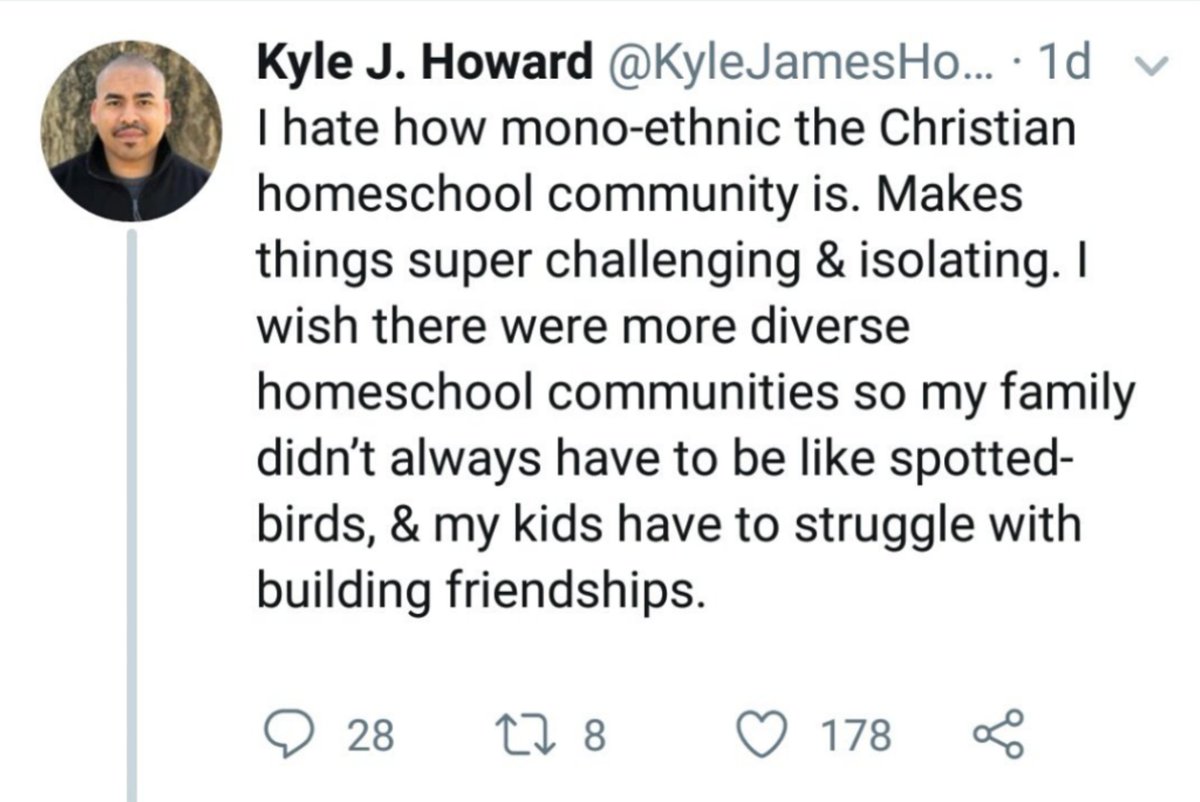 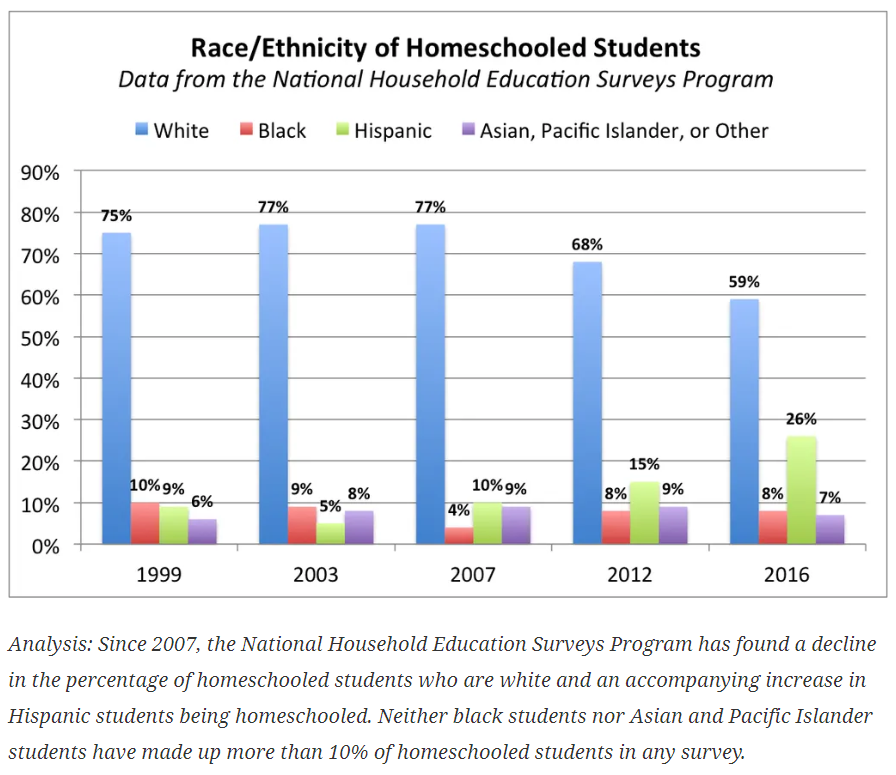 3/ How about the second tweet? Okay, he asks his wife why the lack of diversity, proven above. If the critics are correct, her answer was, "because homeschoolers are racist!" No, she did not. She noted the historic effect of 100's of years of exploitation and disenfranchisement. 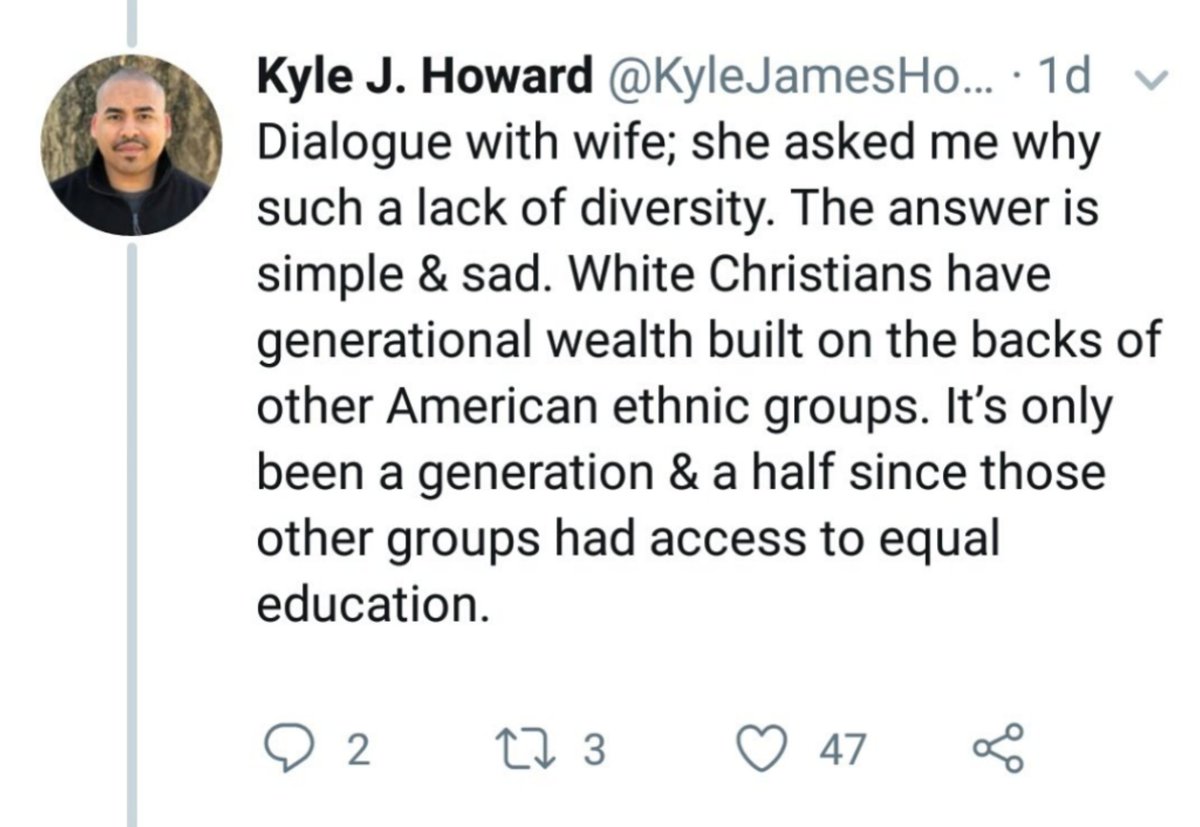 4/ This also should not be controversial. For example, the average “white” child is born into a family with ten to twenty times the wealth of his “black” peer.

https://www.nytimes.com/interactive/2017/09/18/upshot/black-white-wealth-gap-perceptions.html https://www.epi.org/blog/the-racial-wealth-gap-how-african-americans-have-been-shortchanged-out-of-the-materials-to-build-wealth/
The racial wealth gap: How African-Americans have been shortchanged out of the materials to build...

Wealth is a crucially important measure of economic health. Wealth allows families to transfer income earned in the past to meet spending demands in the future, such as by building up savings to...

https://www.usnews.com/news/education-news/articles/2019-02-26/white-students-get-more-k-12-funding-than-students-of-color-report
7/ And we can include disparity in employment, pay, and incarceration:

Despite knowledge of racial bias for drug-related criminal justice involvement and its collateral consequences, we know less about differences between Black and White drug offenders. We compare 243...

https://hbr.org/2017/10/hiring-discrimination-against-black-americans-hasnt-declined-in-25-years
8/ If you do not think these disparities are a component in who does and who does not homeschool, then you are living in la la land.

And if you think 350 years of racial exploitation isn't the principal cause of these race-wide disparities, then nothing will look racist to you.
9/ The final tweet seems to have caused the most consternation.

If there is error here, it might be that homeschooling was nearly non-existent, statistically, around Brown vs. Board.

Also, I would have said explicitly “Christian Homeschool,” since origins vary on this divide. 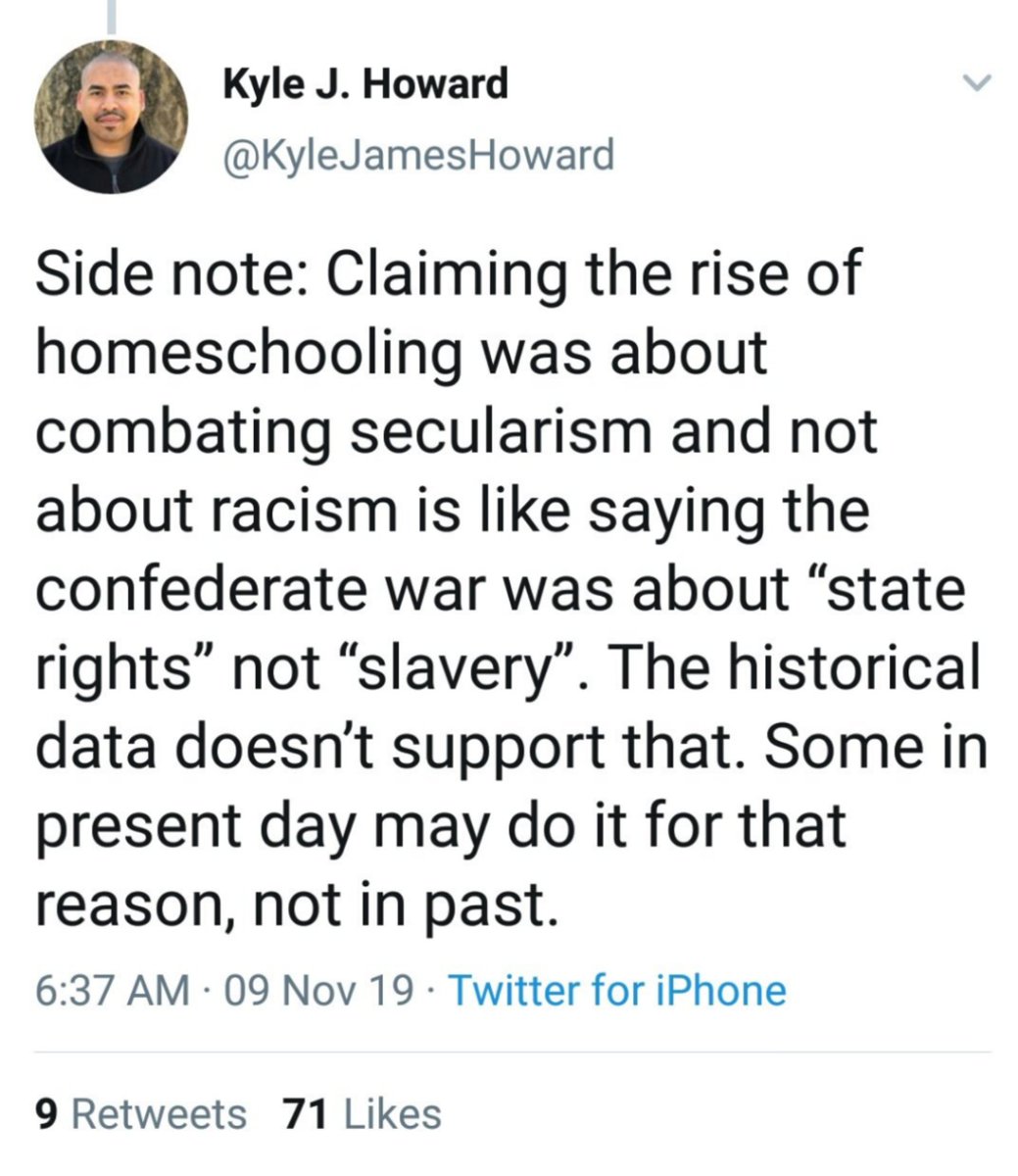 10/ On one side, you have the secular homeschool movement begun by Paul Goodman, Raymond Moore, John Holt, etc. On the other, you have the Christian homeschool movement, pioneered by R. J. Rushdoony, Bill Gothard, Bob Jones and Bob Jones University, Jerry Falwell and
11/ Liberty University, Paul Lindstrom and the Christian Liberty Academy, and resources like Abeka, etc. Without exception, these latter men, institutions, and curricula promoted the Christian White Nationalist view of American history.
12/ White Protestant pilgrims were on a mission from God to create America, they came to a land with very few inhabitants, the Natives were taught the gospel and civilized by the Europeans and those who weren’t were violent barbarians, the South was the most Christian Society,
13/ ...chattel slavery was Biblical, the Civil War was the “War Between the States” fought because the godless North was in totalitarian defiance of “States Rights” and were attempting to impose their liberalism on the South and destroy their Christian civilization, the
14/ ...Southern generals were great godly men and Dabney and Thornwell were American “prophets,” the Civil War led to further revival in the South after the war, the KKK wasn’t ALL bad and did a lot of good for many communities, segregation wasn’t the best,
15/ but “forced integration” was unbiblical, and states rights, freedom of association, privatization, anti-miscegenation, and anti-communism trumped racial integration. This was all summed up as, “the fight against anti-Christian secularization” and the like.
16/ In fact, much of modern Christian homeschool curriculum continues, astonishingly, to proffer many of these views.

And all of this, as Kyle himself stated, does not make homeschooling itself racist!
17/ But I see no reason to recoil at the claim that a major impetus for early Christian homeschooling was the same as what caused the boom of private Christian schools in the South, following Truman’s Civil Rights packages and then Brown I and Brown II.
18/ Maybe just read some Rushdoony, Gothard, Bob Jones, Falwell, etc. from the 60’s and 70’s. Take a look at how BJU and LU came to be, and why they excluded Black students until the Federal Government threatened their tax-exempt status (BJU), remained segregated after,
19/ ...and BJU didn’t allow interracial dating until the 90’s. Check the many articles around the web with quotes from even recent ACE, Abeka, CLASS, etc., curriculum.

And, to conclude, Kyle's entire thread was premised on and began with him saying that HE HIMSELF HOMESCHOOLS.
20/ Not to mention, in the VERY SAME THREAD he said the following: https://twitter.com/KyleJamesHoward/status/1193878333530034176

21/21 In the end, I do think this is just another case of the Social INjustice advocates' smear campaign. They just can't have their Golden Calf of right wing political Christianity questioned in any way, I suppose. Either that or they just can't read or truly hate Kyle. IDK.
22/21 Also, some reading, if interested:

I have spoken with homeschooled high school students who didn't know what the civil rights movement was, or about Jim Crow laws.

http://templeofdemocracy.com/uploads/3/5/2/3/3523099/confederatechristiannationalism.pdf
In short (hahaha), @KyleJamesHoward didn't say what y'all are ineptly accusing him of.
You can follow @AlsoACarpenter.
Tip: mention @twtextapp on a Twitter thread with the keyword “unroll” to get a link to it.