Read on Twitter
Suckers. Albertans still mooing about Trudeau who's done nothing but invest in this province time & time again. But how could you know? You read nothing but memes posted by suckers for suckers. Can they trick you into blaming Trudeau for *this*? Course they can #abpoli #cdnpoli https://twitter.com/StephenPunwasi/status/1187429809858760704

In Alberta, Canada gets to see what a disaster a Scheer government would have been. Kenney's first act as leader was to give enormous taxcuts to already wealthy oil companies that went on to lay off more Albertans anyways /2 #abpoli #cdnpoli #KenneyCuts https://calgaryherald.com/news/local-news/dozens-reportedly-laid-off-by-husky-energy-in-calgary
'They didn't mess around': Hundreds reportedly laid off by Husky Energy in Calgary https://calgaryherald.com/news/local-news/dozens-reportedly-laid-off-by-husky-energy-in-calgary
Kenney waited for the election to announce cuts that'll cripple this province. A voting majority of us'll be easily manipulated into blaming Trudeau for the pain they will inevitably feel from this because most of them, most of YOU, are suckers /3 #abpoli https://nationalpost.com/news/jason-kenneys-conservatives-deliver-the-tougher-budget-they-warned-albertans-was-necessary
Jason Kenney's conservatives deliver the tougher budget they warned Albertans was necessary https://nationalpost.com/news/jason-kenneys-conservatives-deliver-the-tougher-budget-they-warned-albertans-was-necessary
It's been so easy to manipulate us already. Global tectonic shifts hit our oil-only economy? Blame the NDP (though the recession started before they took power) or blame Trudeau for hating *OUR* industry (even though he BOUGHT US A F**K*NG PIPELINE). /4 https://www.cbc.ca/news/politics/trudeau-trans-mountain-pipeline-wherry-1.5179626
Trudeau has his pipeline. Will he get any credit for it? | CBC News

The decision to proceed with the Trans Mountain pipeline expansion project was never going to make a lot of people happy. It's hard to see where Prime Minister Justin Trudeau had much of a choice.

https://www.cbc.ca/news/politics/trudeau-trans-mountain-pipeline-wherry-1.5179626
Given how much money & time Trudeau has given AB (far more in his 4 years than Harper's 8) & response of Albertans TO LITERALLY CALL FOR HIS DEATH the thought coalesces that the only bigger fool in Canadian politics than we Albertans is Trudeau himself /5 http://www.cbc.ca/news/politics/trudeau-western-canada-trans-mountain-1.5332365
Trudeau extends olive branch to Western Canada, vows to build Trans Mountain despite opposition |...

Two days after much of Western Canada rejected the Liberals on election day, Prime Minister Justin Trudeau today vowed to be more sensitive to the needs of Alberta and Saskatchewan and to build the...

http://www.cbc.ca/news/politics/trudeau-western-canada-trans-mountain-1.5332365
Trudeau's ongoing entirely feckless efforts to woo an Alberta that'll *never* be grateful or grownup reminds me a lot of Barack Obama reaching out time & time again to Republicans only to have his hand smacked down every time, a dichotomy that ended up defining his presidency /6
If Trudeau knew what he was up against he wouldn't bother. Albertans aren't born with #UngratefulBabySyndrome. This is a learned behaviour based on an old saw media & politicians across our political divide pull out of the drawer EVERY TIME our economy's rough /7 #abpoli #cdnpoli
Watched NDP & Conservative parties service this lie during our last provincial election, that "Ottawa doesn't care about us" right after "Ottawa" had dropped buckets of cash here. Stoking anger for "Ottawa" is good politics, rested on a foundation of lies though it no doubt be /8
If both sides of the political divide are stoking the same COMPLETELY UNJUSTIFIED anger at *Ottawa* how can you blame our poor media for running the word 'angry' in the same breath every time 'Alberta' is mentioned? Not like they have an agenda, right? /9 https://twitter.com/TheGentYYC/status/1186780186986958850

All that said, there's no denying Alberta has more than its share of easily manipulated bozos attracted to easy-sounding solutions to complex problems, the more reckless the better. Moo out #BuildThatPipeline or #MakeAmericaGreatAgain or #Wexit, either way you're still mooing /10 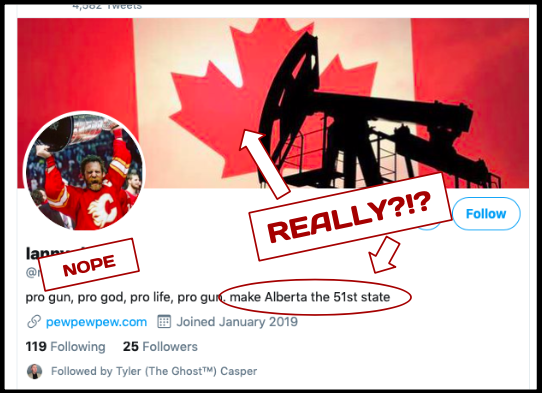 Maybe it's just always been that oil/gas towns votes for leaders that will facilitate oil/gas at the expense of all else in the hopes that all else works out in the end. How do such places fare versus the enormous unprecedented global change we now face? My guess is not good /11
Make no mistake, the #ABbudget will hurt us NOW. The damage it does to this province in the medium to long term is incalculable. Kenny & the con-men'll point to a single orange dot of NDP control & dump all the blame there. Suckers that we are, Albertans'll swallow it whole /END
All for now and thanks for reading. If you feel like supporting the work I do on threads like this you can buy me a cold beverage of the adult nature through this here tip jar and I thank you kindly: https://ko-fi.com/thegentyyc
Buy TheGentYYC a Coffee. ko-fi.com/thegentyyc

https://www.patreon.com/TheGentYYC
This thread is also available for folks not yet enamoured with this weird & wonderful Twitterverse of ours in article format at the Gent's blog/webpage/thingamabobber. Thanks for spreading the word! https://the-gent-yyc.wixsite.com/thegentyyc/post/welcome-to-sucker-country
Welcome to Sucker Country

From provincial & federal election results to our fledgling non-army of #MAGA-styled separatist bozos, this province is ripe for the plucking. When oil/gas & the Kenney-Cons are done with us they'll...

https://the-gent-yyc.wixsite.com/thegentyyc/post/welcome-to-sucker-country
And finally, if you're getting value from this thread you may want to check out my "Genthology", containing 30 threads (and counting) on all the biggest, most critical issues of our time. Buckle up and bring whiskey. https://twitter.com/TheGentYYC/status/1282842353980411905