Read on Twitter
134 years after the legal dispute first began to be heard in the courts, "Enough is enough! #AyodhyaHearing must conclude by 5 pm today", says the Chief Justice of the Supreme Court of India.

134 years.
The new Indian vocation appears to be ordering people to not celebrate the Ayodhya verdict if it goes in their favour.

This when the same Indians are perfectly fine with celebrating the supremacy of a religion, of a god, over other religions and other gods. Every single day.
I'll tell you what I am celebrating - that I live in a country where a billion have, in effect, left it to five to decide the weight of their religious belief.

How much more open and mature can one get. India is going to write her history with the grammar of justice not anarchy.
It took 490 years for an historical injustice to be corrected. But corrected it has been.

यतो धर्मस्ततो जयः Where there is Dharma, there is Victory :The inscription under the Supreme Court emblem.

THIS, is why I love my India.
When Dr KK Muhammed was told he was going to be suspended for making public that he had discovered temple remnants inside Babri, he replied, in Sanskrit: Lokasamgramevapi Sampasyan Kartumarhasi. Swadharme nidhanam shreya.

I spoke the truth. Death is preferable while on duty.
Rama, Sita, and Lakshmana returning to Ayodhya. 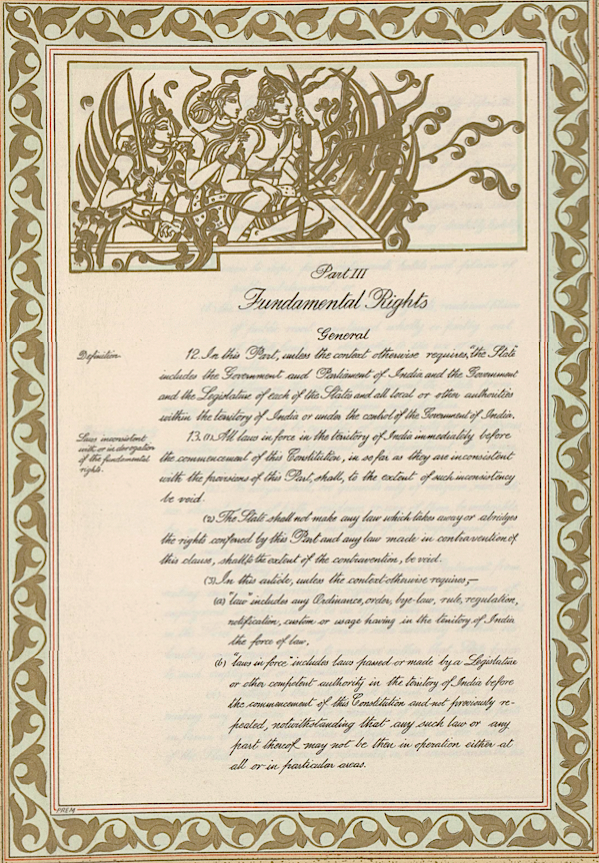 Today is the day when India wrote her history with the grammar of justice, not anarchy.

My summing up on @TimesNow. #RamMandirInAyodhya
The 1891 ASI Report that was cited by one of the Supreme Court judges yesterday ( https://www.sci.gov.in/pdf/JUD_2.pdf ).

Mir Khan built a masjid on the Janmasthanam during the reign of Babar, which still bears his name. This old temple must have been a very fine one...
https://ia601607.us.archive.org/10/items/in.ernet.dli.2015.34670/2015.34670.The-Monumental-Antiquities-And-Inscriptions-In-The-North-western-Provinces-And-Oudh.pdf

Supreme Court accepting the 2003 ASI report as proof of a large temple of Hindu religious origin whose foundations were used to build a mosque over it ( https://www.sci.gov.in/pdf/JUD_2.pdf  ).

The @ASIGoI team of scientists and archaeologists need to be thanked for their phenomenal work. 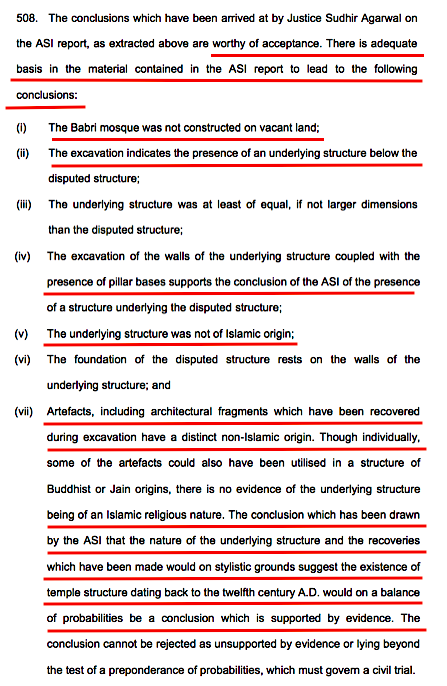 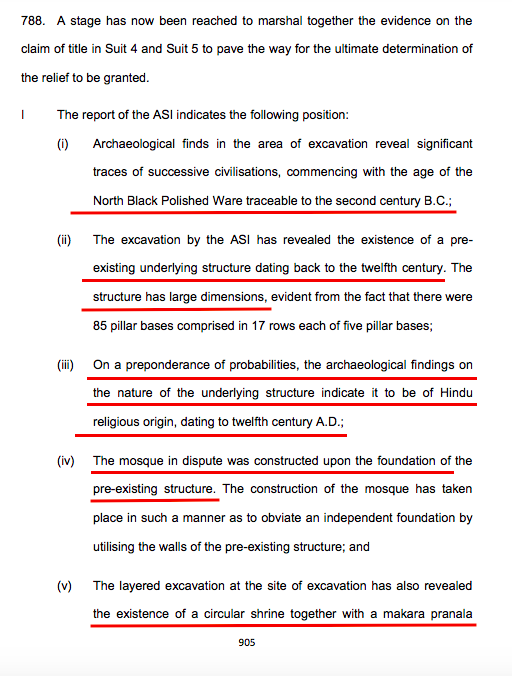 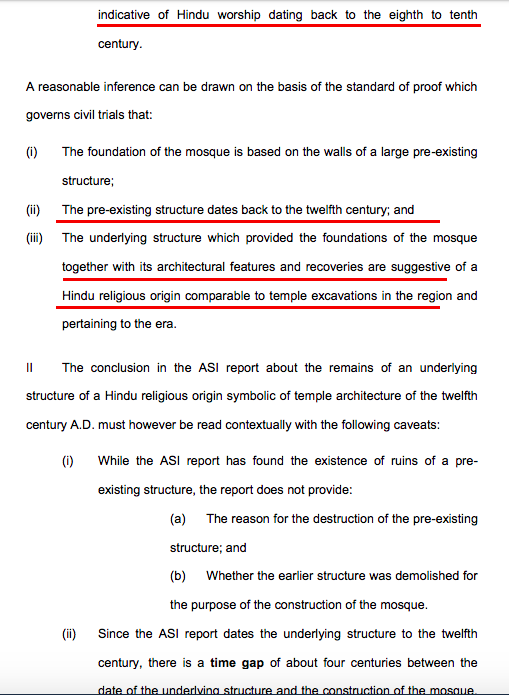 Historical injustice of Kashi can now never be addressed unless parliament overrides BOTH, the 1991 Act and this SC judgment. 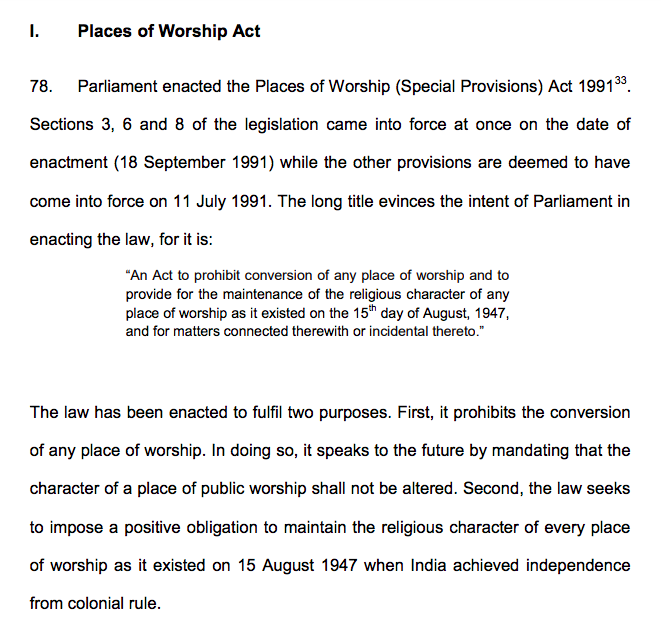 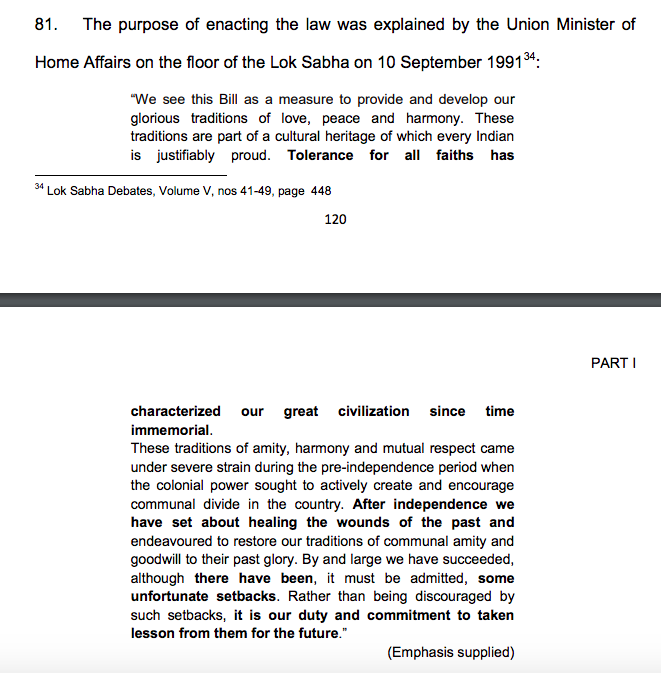 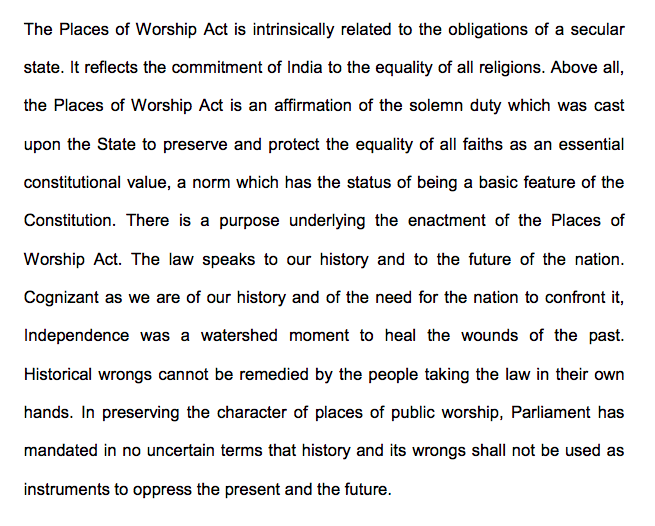 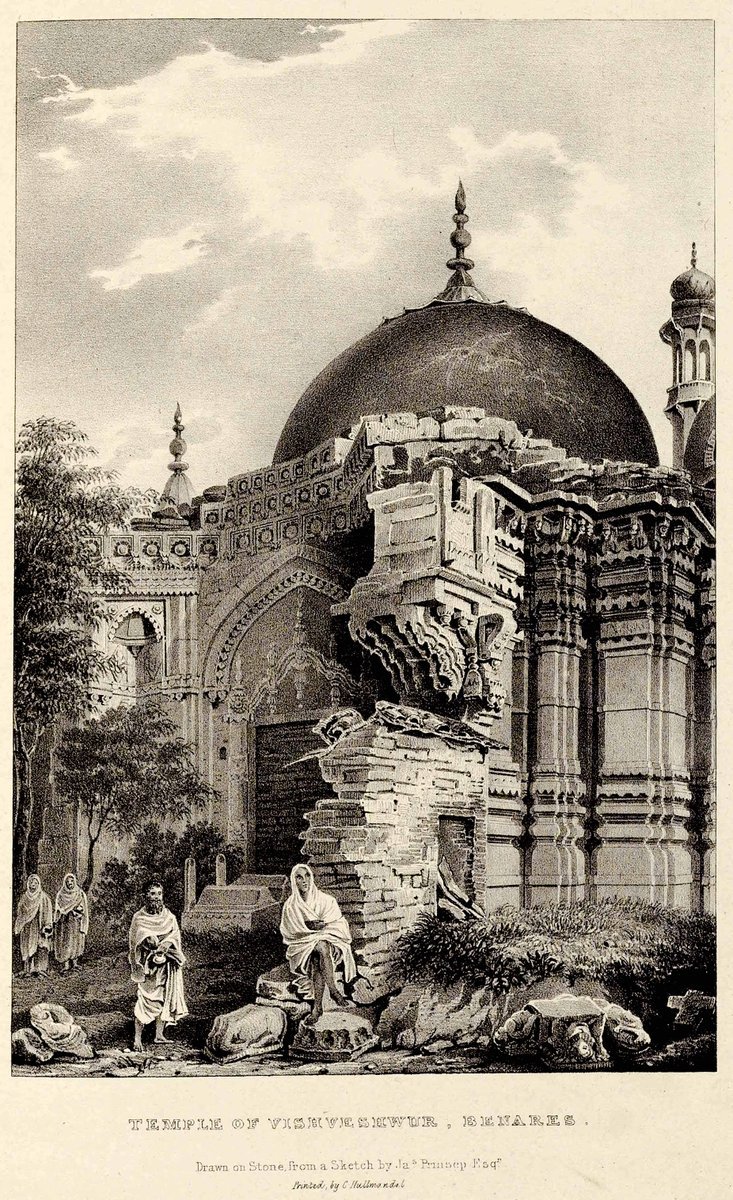 Someone should file a review petition imploring the hon'ble Supreme court to retract its wilful ratification in its Ayodhya verdict, of the Places of Worship Act, 1991.

A legal recourse to correct historical injustices must not be denied in a democracy.
I convey an urgent message from Dr Meenakshi Jain: These amazing treasures were probably under the Ram Lalla murti that has only now been shifted. It is VITAL that digging should now involve the @ASIGoI. We need to protect the old as much as build the new. https://swarajyamag.com/insta/ayodhya-ram-janmabhoomi-five-foot-shivaling-broken-idols-carved-pillars-discovered-during-construction-work
Ayodhya Ram Janmabhoomi: Five-Foot Shivaling, Broken Idols, Carved Pillars Discovered During...

https://swarajyamag.com/insta/ayodhya-ram-janmabhoomi-five-foot-shivaling-broken-idols-carved-pillars-discovered-during-construction-work
Dear @VHPDigital & @ShriRamTeerth. Drs Meenakshi Jain and KK Muhammed are of the opinion that these priceless excavated idols and Sivalinga could be from the eighth century or earlier. Please pause on the excavation until you involve them and the @ASIGoI. https://twitter.com/ShriRamTeerth/status/1263109819889672192

Nations weaken not because of their past but, rather, by how they are taught it.

My views on @TimesNow with @RShivshankar, on the discovery of Hindu idols at the Ram Janambhoomi site and the shameful perfidy of the Left. #RamMandirExisted
Dr BB Lal. The legendary archaeologist who proved the existence of a temple under the Babri mosque.

Here in an interview to @madhukishwar, the 99 year-old recounts how @PMOIndia neglects the treasures of Kalibangān, even as it renovates Aurangzeb's coronation site.

BLOOD BOILS.
The Ayodhya Ram Mandir Corona jibe by @PawarSpeaks is a calculated move to wrest control of the appeasement bank in the now secularised Maharashtra political landscape.

My views on @TimesNow with @PadmajaJoshi. #AghadiMandirHypocrisy
The Bhoomi poojan is a momentous occasion for the religious Hindu as well as for all Indians.

A confident and just India will rise from the ashes of a meek and victimised one on August 5.

My views on @TimesNow with @RShivshankar. #RamBhumiPujanBlockade
The concept of Justice is like memory; it keeps getting passed on until realised. Today, it stands realised.

My views on @TimesNow with @RShivshankar and @navikakumar.
#MandirBhumiPujan
I am sure the Left, that claims to fight casteism must be celebrating today the fact that a man who a century ago, because of his caste, wouldn't have been allowed near a temple sanctum leave alone enter it, is today laying the foundation of the most sacred temple sanctum of all.
Gyanvapi mosque (Illustration by James Prinsep, 1836) built atop the Kashi Vishwanath Temple demolished by the genocidal MONSTER Aurangzeb.

If orphaned stones could speak and not just weep, the stories they would tell; if we weren't fearful of our past, the future we would have. 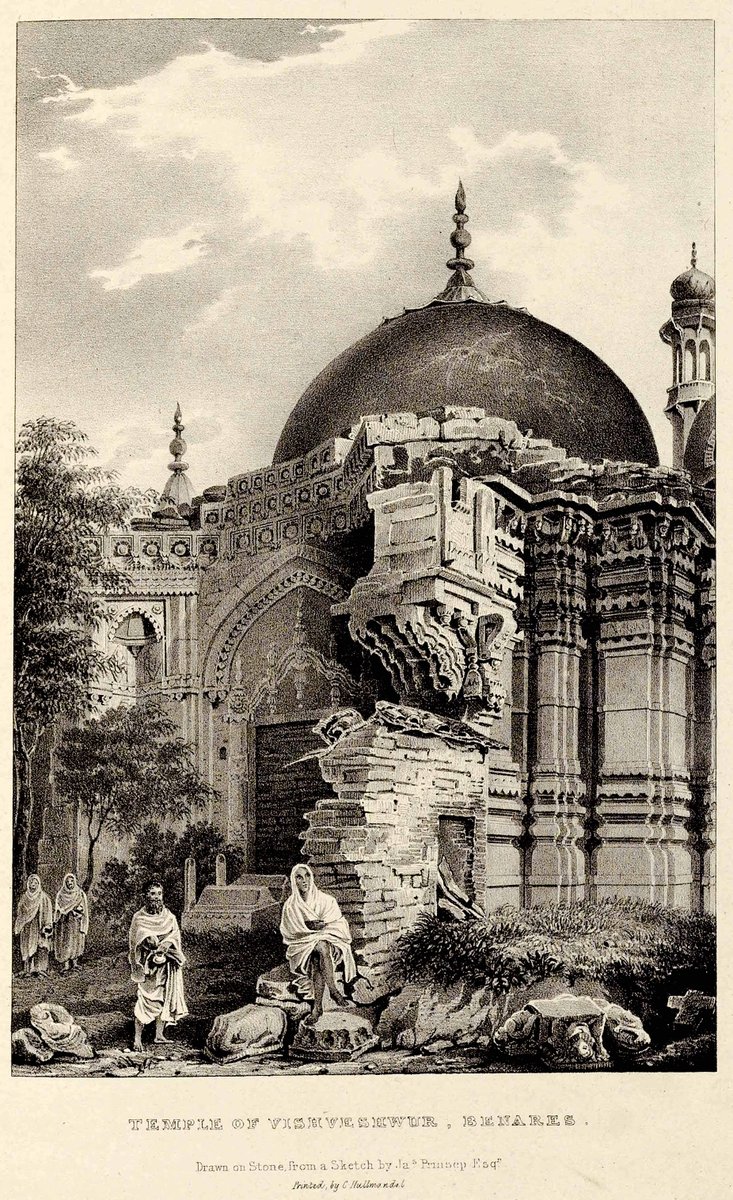 These and other views on @TimesNow with @RShivshankar, that include exposing the rank perfidy and Hinduphobia of the Left and the AIMPLB. #BharatRisesWithRam
On the court judgement on the Babri demolition.

My views on @TimesNow with @RShivshankar. #BabriProvocation
You can follow @ARanganathan72.
Tip: mention @twtextapp on a Twitter thread with the keyword “unroll” to get a link to it.