Read on Twitter
If every item you deliver in the market is subsidized by funders, you are destroying value at a macro scale.

Especially if you are "disrupting" a market where existing players ran their businesses profitably.
I just felt like adding this tweet under the first one. https://twitter.com/OgaSamuel/status/1177496441268232192?s=19

Related but unrelated. This is such a good lecture.
https://www.stitcher.com/s?eid=63852511&refid=asa

I’ve been thinking a lot about gross profit (and gross margin) lately. Yeah, I know I can be riveting, but stay with me. When I was in Boston a while ago (it was very cold, so it must have been...

WeWork investors realised the CEO mucked up their big payout (they cash out at IPO), so they're kicking him out and paying him off.

Will they manage to push this pyramid scheme to the end, or will it all collapse?
Doesn't matter the industry, ultimately, you have to make money. Real money. https://twitter.com/docolumide/status/1187615766293762049

Net revenue - your sales minus direct costs of making those sales.
EBITDA - Earnings before interest tax, depreciation and armotisation (basically your operating income)
FCF - Free cashflows. What remains after you've paid your bills.
Folks like to argue that Amazon did not make profits for decades. Managing your earnings, and reinvesting your earnings is not the same as losing money with each item you sell. Amazon is the former, your fave unicorns are the latter.
Amazon is unlike any other unicorn we've seen in recent days, in terms of business model, but also managing money. Can't compare it to WeWork, Uber, or even Jumia the "Amazon of Africa"
This podcast is a must-listen if you want to understand why I say this. https://www.vox.com/land-of-the-giants-podcast
https://twitter.com/prepaid_africa/status/1189094619906228224

After years of saying profits don't matter, just scale and profits will come (thanks Facebook), it's interesting to see tech businesses realising that at some point, you HAVE to make money
It starts with crazy growth. Even an IPO. Then investors start demanding that you figure yourselves out, and layoffs and restructuring begins.
Snap. After an IPO prospectus which said they don't forsee ever making profits. Their share price tanked and hasn't recovered https://www.theverge.com/2018/3/8/17096844/snap-layoffs-over-120-engineers-confirmed-snapchat
Snap confirms layoffs of ‘just over 120’ engineers

This is Snap’s largest layoff to date.

https://www.theverge.com/2018/3/8/17096844/snap-layoffs-over-120-engineers-confirmed-snapchat
In 10 weeks, my favourite bleeder Uber has laid off over 1,000 employees. https://www.cnet.com/news/uber-layoffs-continue-this-time-350-employees-from-eats-and-self-driving-car-teams/
Uber cuts 350 employees in latest round of layoffs

It's the third round in 10 weeks. This time the cuts included staff from the self-driving car and Uber Eats teams.

The embattled office-sharing company's new co-CEOs are eyeing thousands of job cuts as they seek to streamline the business.

https://www.businessinsider.com/wework-plans-thousands-of-job-cuts-shelving-initial-public-offering-2019-10
M-Kopa laid off staff (mostly techies) and outsourced it's tech work to a European company owned by its former CTO https://qz.com/africa/1229170/m-kopa-solar-lays-off-kenya-uganda-staff-as-it-restructures/
The global leader in pay-as-you-go solar power is downsizing to stay profitable

The move is meant to improve its competitiveness and ensure long-term sustainability.

https://qz.com/africa/1229170/m-kopa-solar-lays-off-kenya-uganda-staff-as-it-restructures/
Andela's scaling model proved unsustainable so they had to cut down. https://techcrunch.com/2019/09/17/africa-focused-andela-cuts-400-staff-as-it-confirms-50m-in-revenue/
Africa-focused Andela cuts 400 staff as it confirms $50M in revenue

https://techcrunch.com/2019/09/17/africa-focused-andela-cuts-400-staff-as-it-confirms-50m-in-revenue/
What's sinister about all these businesses is that they receive funding on the basis of using tech to "change the world", but once funding dries up, the techies are the first to be kicked out. WeWork is the worst example of this.
As his employees lose their jobs, the WeWork CEO is getting a consulting gig from WeWork that makes him as highly paid as a CEO in a US listed company.
In many of these "Very Funded" businesses, the founders and CEOs get paid very well.

And with subsequent funding rounds, they may even cash out some of their own stock.
Stock options are great, but often employees have a different class of stocks than what funders have. This is a good read https://link.medium.com/Yov7LStz50
My company sold for $100 million and I got Zilch. How can that be?

https://link.medium.com/Yov7LStz50
"When venture capitalists buy equity, they typically do not buy the same shares employees get, which are common shares. They buy preferred shares."
"The principal benefit of preferred shares for those who own them is that they get their money out first if the company is sold. While common practice is they get the same out that they put in, it is not unheard of for some of that money to carry a multiple, 2x or even more"
"Point is, this is the market, and it has been that way for a long time, and there is nothing inherently wrong with these terms. But if you don’t know about it, it sucks."
Most employees think that, if they own 1% of a company sold for $100 million, they will get $1 million. But that’s not the whole equation. What they will really get is the following:
Sales price minus legal fees minus carve-out minus banker fees minus preferred overhang, then that remainder is divvied up by percent of company-owned.
The “easiest” way for your 1% to be worth nothing is to have that preferred overhang be a lot of money since all the other things in the equation usually do not end up being more than about 15–20% of the total value being received in the sale.
This happens when a company has raised multiple rounds.
What is wrong with startups that are "just figuring it out" getting millions of dollars in funding to run their experiments?

When those experiments fail, they destroy value and destroy lives https://www.nytimes.com/2019/11/12/technology/softbank-startups.html#click=https://t.co/EAhRPUnkTq
The SoftBank Effect: How $100 Billion Left Workers in a Hole

SoftBank poured money into start-ups that use armies of contractors. That has upended the lives of drivers, hotel operators and real estate agents around the world.

https://www.nytimes.com/2019/11/12/technology/softbank-startups.html#click=https://t.co/EAhRPUnkTq
Right definition of scaling: Do something small that works, then grow it.

VC definition of scale: Do something small, realize it isn't working but grow anyway, publicise it to attract more funding so we can be bought out.
Jumia shutting down it's Cameroon operations and they're also bleeding money. Begs the question, how can e-commerce be done sustainably in our market? https://twitter.com/africatechie/status/1196431330533400576?s=19

Jumia shut down in Tanzania last month, is shutting down in Rwanda and shutting down Jumia travel in Nigeria - which I suspect is their largest market in the continent https://techweez.com/2019/12/09/jumia-ceases-operations-rwanda-jumia-travel-nigeria/
Jumia to Cease Operations in Rwanda, Shuts Down Jumia Travel in Nigeria

https://techweez.com/2019/12/09/jumia-ceases-operations-rwanda-jumia-travel-nigeria/
It doesn't matter how much you've read about WeWork's meltdown, you want to listen to this 6-episode podcast. Unbelievable stuff!
https://www.stitcher.com/s?fid=497256&refid=asa 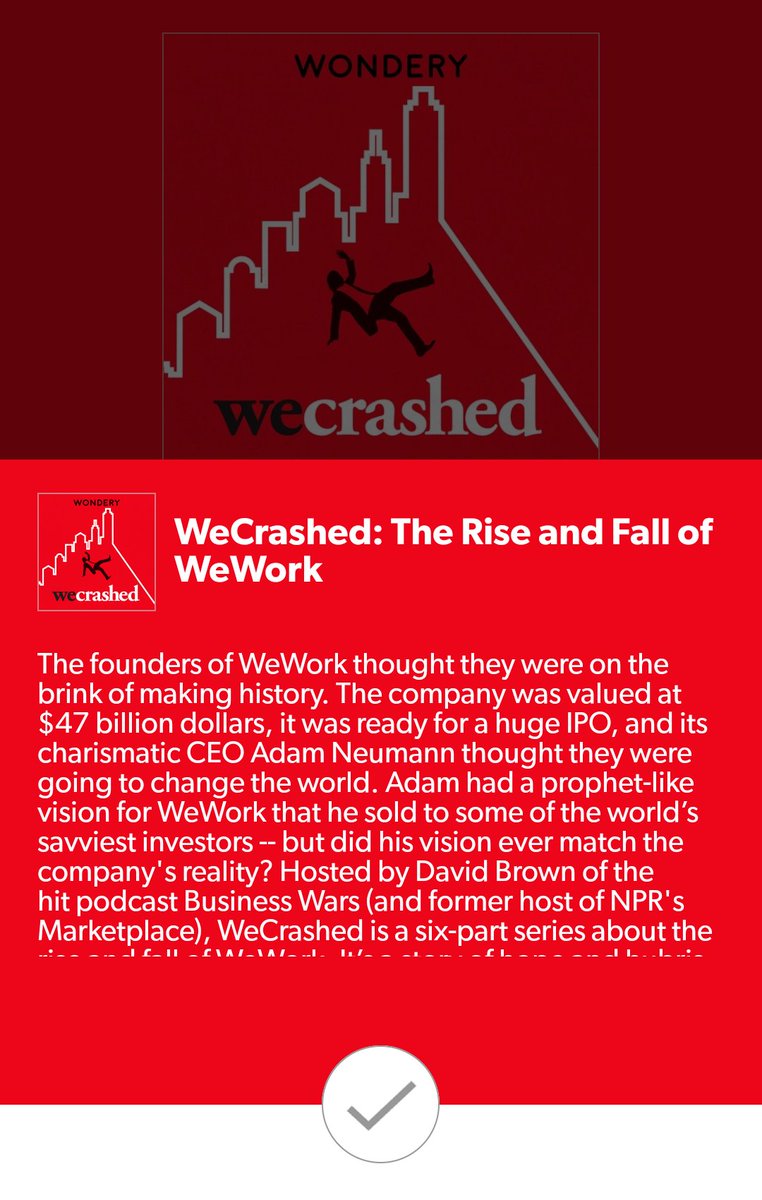 I haven't updated this thread in a while 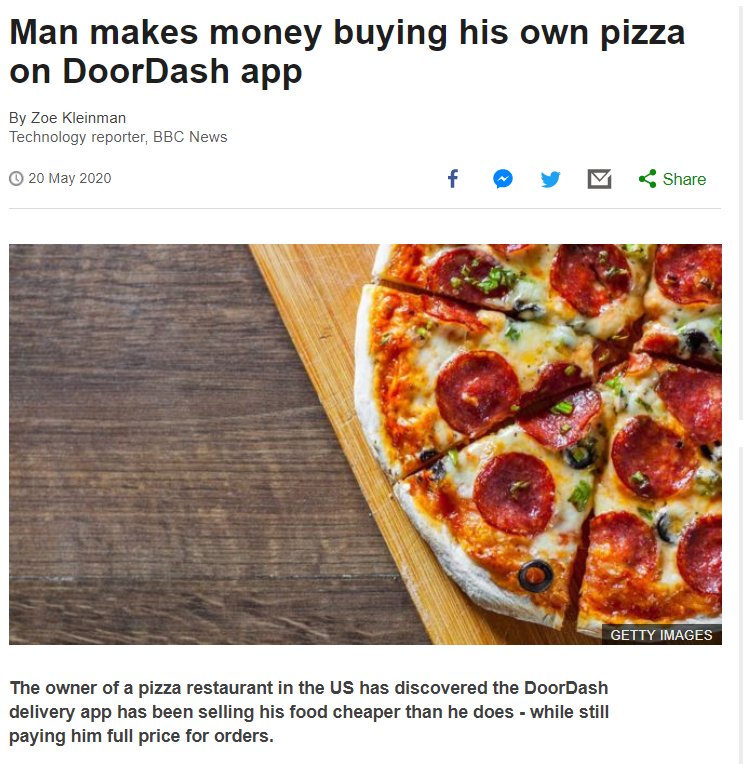 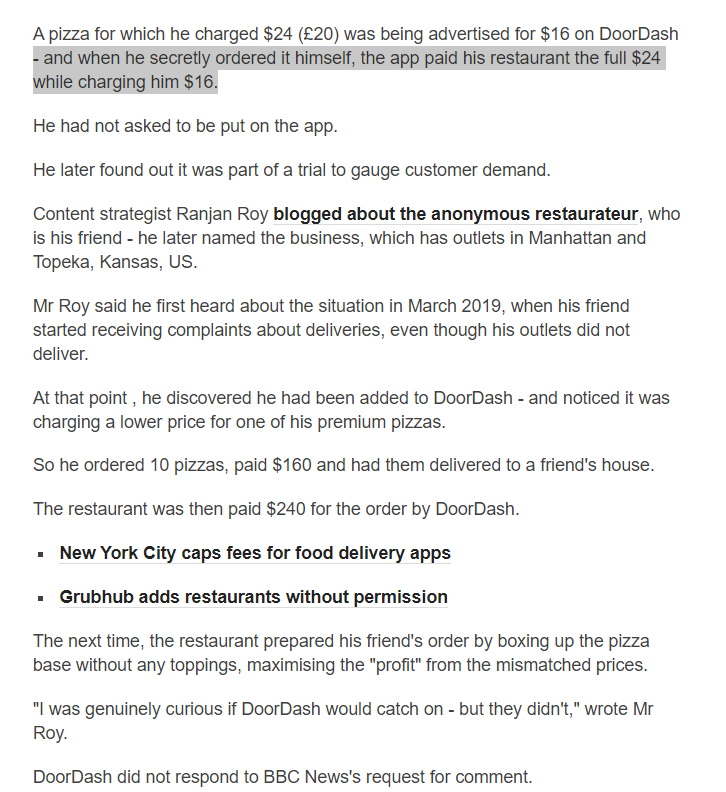 You can follow @RookieKE.
Tip: mention @twtextapp on a Twitter thread with the keyword “unroll” to get a link to it.