Read on Twitter
Alright, lemme do a lil rewriting here on this @FT puffpiece...

First off, they buried the lede 25 graphs down, second to last:

Subpoenas from the House’s Financial Services and Intelligence committees were the latest attempts by congressional Democrats to collect information about the finances of President Trump.

4/ Oh my, @FT forgot to mention that “delicate loan restructuring” in 2016.
https://www.bloomberg.com/news/articles/2016-12-22/deutsche-bank-s-reworking-a-big-trump-loan-as-inauguration-nears @business
Trump May Have a $300 Million Conflict of Interest With Deutsche Bank

For years, Donald Trump has used a powerful tool when dealing with bankers: his personal guarantee.

Trump’s senior adviser says he will recuse himself from matters involving the lender, which has paid billions to settle U.S. and New York state charges.

https://www.washingtonpost.com/national/kushner-firms-285-million-deutsche-bank-loan-came-just-before-election-day/2017/06/25/984f3acc-4f88-11e7-b064-828ba60fbb98_story.html
6/ I guess a line or three about the whistleblower story would’ve gotten in the way of the @ft press release.
https://www.nytimes.com/2019/05/19/business/deutsche-bank-trump-kushner.html @nytimes
Deutsche Bank Staff Saw Suspicious Activity in Trump and Kushner Accounts

William Broeksmit, a former senior manager at Deutsche Bank with close ties to co-CEO Anshu Jain, has been found dead at his home in London in what appears to have been a suicide.

https://www.scmp.com/business/banking-finance/article/1416134/deutsche-bank-manager-found-dead-london-home
8/ The new head of its wealth management division studied at MIT, which took hundreds of millions from an oligarch, but I digress. https://twitter.com/heidi_cuda/status/1165505704414679041?s=21

”$630m fines on Deutsche for its role in a money laundering scam out of Moscow..The bank failed to prevent $10bn of Russian money being laundered..Deutsche’s Private Bank—the division that lends to Trump—appears in Global Laundromat scheme.”
https://www.theguardian.com/world/2017/mar/21/deutsche-bank-that-lent-300m-to-trump-linked-to-russian-money-laundering-scam @guardian
Bank that lent $300m to Trump linked to Russian money laundering scam

https://www.theguardian.com/world/2017/mar/21/deutsche-bank-that-lent-300m-to-trump-linked-to-russian-money-laundering-scam
10/ There’s only so much room in a 27 graph story but playing “hide the transnational crime syndicate corruption” is simply shitty journalism.

“Three execs from Deutsche Bank were implicated civilly, including the wealth mngt dir.. Gambino moved to the white-shoe law firm Skadden Arps before taking the position at Deutsche..all 3 men worked for, or did business with, Deutsche Bank.”
https://nypost.com/2016/06/12/why-are-so-many-bankers-committing-suicide/ @nypost
Why are so many bankers committing suicide?

Three bankers in New York, London and Siena, Italy, died within 17 months of each other in 2013-14 in what authorities deemed a series of unrelated suicides.

“Skadden Arps was paid more than $4.6 million via both the Ukrainian Ministry of Justice and offshore accounts controlled by Manafort.”
http://thejewishvoice.com/2019/01/23/nycs-skadden-arps-law-firm-to-pay-4-6m-to-settle-probe-into-work-for-ukrainian-govt/ @JewishVoice
13/ And while we’re on the subject of former Skadden employees and jailbirds: recall this son-in-law of a Ukraine oligarch—an oligarch who’s an owner of Alfa Group which has ties to Deutsche Bank.
https://www.nytimes.com/2018/02/20/us/politics/alex-van-der-zwaan-gates-russia-mueller.html @nytimes
Former Skadden Lawyer Pleads Guilty to Lying in Russia Investigation

The lawyer admitted lying in an interview with the special counsel about conversations he had with Rick Gates, who served on the Trump campaign.

https://www.nytimes.com/2018/02/20/us/politics/alex-van-der-zwaan-gates-russia-mueller.html
15/ “Deutsche Bank reportedly tried to jettison a $600 million loan to VTB Group, a Russian bank, amid questions over Russia's meddling in the 2016 election that made Trump president*..Deutsche sold $300 million of the loan to Alfa Bank.”
http://www.businessinsider.com/deutsche-bank-tried-to-shed-loan-it-made-to-vtb-group-a-russian-bank-2019-2 @businessinsider
Deutsche Bank reportedly scrambled to jettison a $600 million loan it made to a Russian state-owned...

Deutsche Bank's ties to Trump have come under increased scrutiny amid investigations into Trump's contact with Russia during the 2016 election.

http://www.businessinsider.com/deutsche-bank-tried-to-shed-loan-it-made-to-vtb-group-a-russian-bank-2019-2
16/ #15 con.
“The bank concluded Trump's campaign rhetoric made him a risky borrower..They also weighed risks the bank might have to seize a president's assets..Deutsche Bank's shares have fallen close to 50% over the last 12 months—spurred by two bank raids—reaching record lows”
17/ Re #3, I’m sure @FT meant to include.
https://www.bloomberg.com/news/articles/2019-07-05/rentech-has-been-pulling-money-out-of-deutsche-bank-for-months @business
RenTech Has Been Pulling Money From Deutsche Bank for Months

Renaissance Technologies, the hedge fund giant that Deutsche Bank AG has counted as one of its largest clients, has been taking money out of its prime brokerage accounts with the German lender over...

https://www.bloomberg.com/news/articles/2019-07-05/rentech-has-been-pulling-money-out-of-deutsche-bank-for-months
18/ “Ackermann’s reign at Deutsche Bank was hardly clean..he is also on the board of directors at Renova, a company that owns a large stake in the Bank of Cyprus and belongs to Viktor Vekselberg—one of the Kremlin-linked oligarchs.”

While names like Carter Page, Roger Stone and Michael Flynn dominate headlines amidst allegations of possible collusion with Russia, there’s another angle to Donald Trump’s connections to the former...

https://www.justsecurity.org/39409/money-russia-cyprus-trump-teams-odd-business-dealings/
19/ Sidebar: “Trump and his family sued Deutsche Bank..in an attempt to block the bank from complying with the subpoenas..In May..Judge Edgardo Ramos ruled that Trump couldn’t temporarily block the subpoenas while the case is being decided.”
https://www.wsj.com/articles/deutsche-bank-tells-court-it-has-trump-tax-returns-sought-by-congress-11566946669 @wsj
Deutsche Bank Tells Court It Has Trump-Related Tax Returns Sought by Congress

Deutsche Bank has copies of tax returns sought under a congressional subpoena for the president and his family’s financial information, the bank told a federal appeals court on Tuesday.

https://www.wsj.com/articles/deutsche-bank-tells-court-it-has-trump-tax-returns-sought-by-congress-11566946669
20/ “Asked whether it was normal to give more money to a customer who has bad credit and is a litigant, one Deutsche staffer said: ‘Are you f---ing kidding me?

“On 1/6/2017, U.S. intelligence formally accused the Russian govt of interfering in the U.S. election on behalf of Trump, a client of Deutsche Bank.”
https://www.wsj.com/articles/deutsche-bank-in-late-2016-raced-to-shed-loan-it-made-to-russian-bank-vtb-11549147289 @WSJ
Deutsche Bank in Late 2016 Raced to Shed Loan It Made to Russian Bank VTB

Deutsche Bank raced in 2016 to shed a loan it had made to VTB Group that raised concerns inside the German lender about exposure to Russia, according to documents and people familiar with the matter.

I realize you’re under new ownership and the Deutsche Bank story is complex, but do let’s leave the puffpieces up to the corporate hacks and the PR wires.

Democracy is counting on you.

A concerned citizen, truth activist and veteran journalist
23/ On the Record: I forgot #14 so here’s a pull-quote from #18:

“There was cultural of criminality,” said a former analyst. “Deutsche Bank was structurally designed by mngt to allow corrupt individuals to commit fraud.”
https://www.justsecurity.org/39409/money-russia-cyprus-trump-teams-odd-business-dealings/ @just_security from the @NewYorker 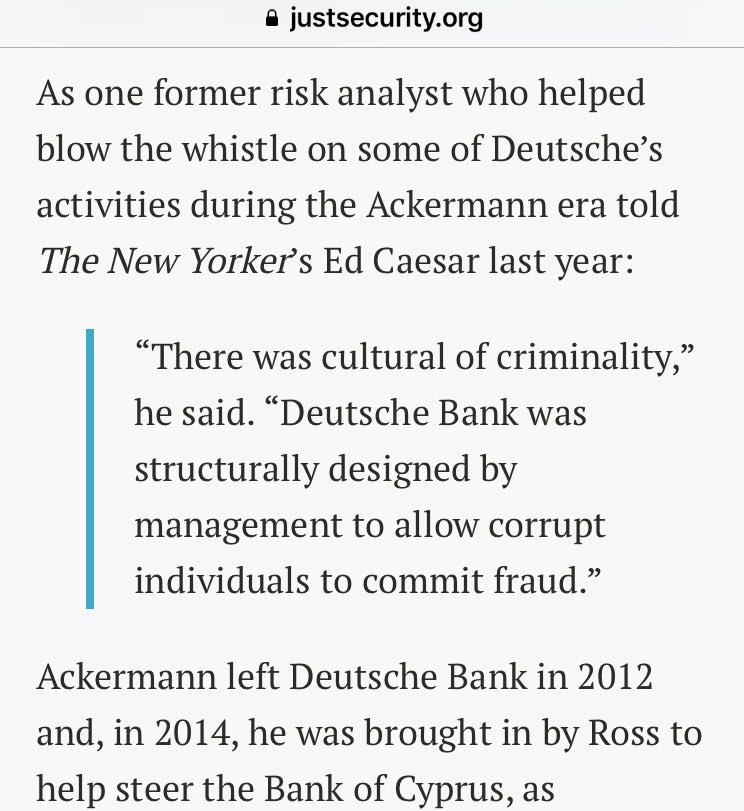 25/ Mitt’s got some history with money-laundering bank, too.

You can follow @Heidi_Cuda.
Tip: mention @twtextapp on a Twitter thread with the keyword “unroll” to get a link to it.